Horrifying footage shows a sneak attack on a homeless man who is kicked in the back so hard he faceplants on to concrete.

He is hit forcefully in Riley Square, Coventry, and smacks into the concrete which gives him no time to catch himself in the attack yesterday.

It was filmed by the attacker who pushes the vulnerable victim who is trying to balance himself and pick up one of his shoes – and was uploaded on to the Spotted Coventry City Facebook page today. 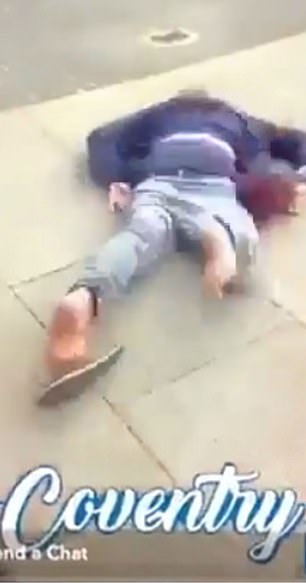 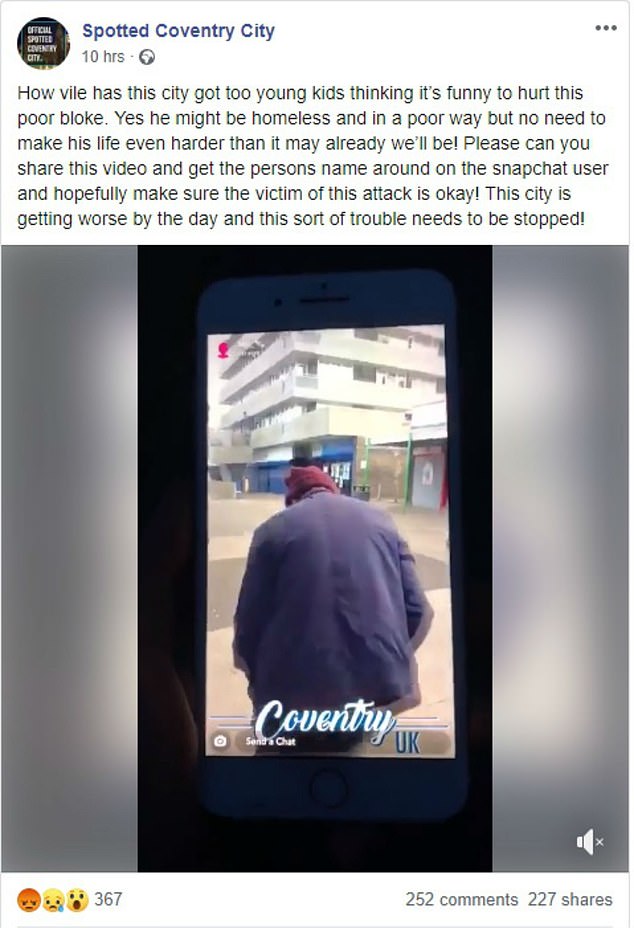 It was captioned: ‘How vile has this city got? Young kids think it’s funny to hurt this poor bloke. Yes he might be homeless and in a poor way but no need to make his life even harder than it may already be.’

‘Please can you share this video and get the person’s name around on the Snapchat user and hopefully make sure the victim of this attack is okay.

‘This city is getting worse by the day and this sort of trouble needs to be stopped.’

Anthony Anderson claimed he was the last person to see the vulnerable man who went into A&E for an injection and to get his lips stitched.

He replied to the post: ‘He slept and he was calm and was no hassle hope he is okay. He was sound with me before he left.’

Hayleigh Phillips added: ‘This is absolutely disgusting. I sat with this guy who is a local resident of the area, whilst waiting for ambulance and police to arrive. The little rats who done this have been witnessed.’

Yvonne McKinnon wrote: ‘Absolutely disgusting. My blood is boiling. This poor man who are these kids being raised by. What is happening to our younger generation. God help us all. 20 years from now our country will be ruined. No respect, compassion or values for each other.’

Tam Wardy said: ‘Omg this is disgusting looks like Bell Green, shame on them.’

Antny Rollason said: ‘What all you people didn’t see as I seen this as it happened was: ‘The man fell over drunk, the lad went over and held out his hand to help him up and I thought fair play to the lad, and then he kicked him in the back.’