A homeless man was charged with felony assault for allegedly kicking an NYPD officer in the hand after the cop is seen in bodycam footage punching and dragging him off a New York subway train because he was using up more than one seat.

The footage shows when the 30-year-old homeless man is punched and hauled off a No. 6 train in Manhattan around 12:30 a.m. May 25.

Officer Shimul Saha, according to a criminal complaint, said the man was ‘occupying more than one seat’. The man complies, when he is asked to leave, but is seen in the footage moving to another car.

The footage later shows another cop, identified as Adonis Long, reaching out to the man, who responds by swatting his hand away. That’s when the cop, shown in the video, strikes the homeless man and drags him off the train car.

The cop, pictured in the footage, is seen asking the man to leave the subway car 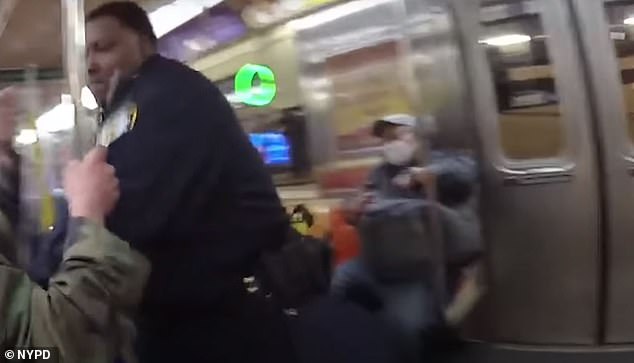 Prosecutors chose to charge the man with felony assault after police claimed he kicked the cop who struck him in the hand. The officer was identified as Adonis Long, The City reported Tuesday.

Police in the criminal complaint charged that Long ‘sustained swelling and substantial pain to the knuckles of his right hand and was transported to the hospital.’

‘He informs me that because of the swelling he is unable to open and close his hand without experiencing pain,’ said Saha, who wrote the complaint.

The homeless man, who would only give his name as Joseph T. during an interview with the online local news service for fear of retaliation, is being represented by the Legal Aid society, which has called for the charges to be dismissed.

Joseph’s attorneys also demanded that the the officer who struck him, identified as Adonis Long, to be fired from the department.

‘The brutal attack on Joseph by these officers is both unconscionable and completely indefensible,’ said Legal Aid attorney Edda Ness.

The NYPD did not respond when The City reached out for comment. 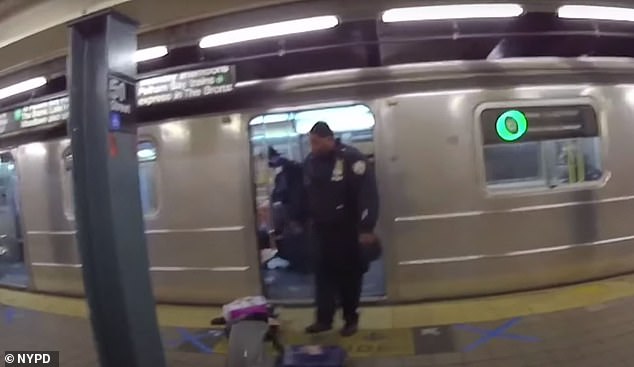 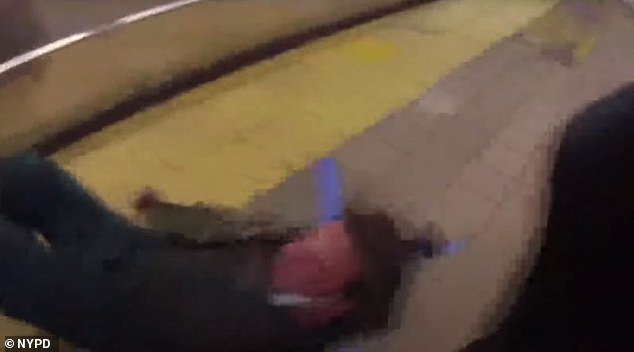 The man, pictured from the footage, is seen being subdued on the platform of the station at 59 Street and Lexington Avenue

Joseph, a hair stylist by trade who boarded the train after he did not want to wait for a bed at a homeless shelter, said he thought the police may have mistaken him for another person.

‘I felt like my heart was going to fall out,’ he recalled, when speaking to The City about the incident.

‘I feel like somebody else did something that looks like me and I’m getting the repercussions from it,’ he said.

The police initially arrested Joseph for resisting arrest and obstructing government administration, as well as a violation. But the district attorney’s office upgraded the charges, claiming during his May 26 arraignment that he ‘responded with violence,’ when approached by cops.

A spokesperson from the office said the footage from the incident was still under review and that authorities were ‘continuing to investigate all aspects of this interaction’.