A homeowner who recently put her house on the market has revealed some of the cheeky editing tricks real estate agents use when uploading photos of a property.

The woman from Perth, who goes by the TikTok username renovate.with.madi, shared two photos of her laundry and how her agent had photoshopped both the taps and the powerpoint socket.

Comparing the photos she sent to her agent compared to the ones shown on the property listing, Madi said the powerpoint had been changed to an international socket and the nearby taps for the laundry sink had completely been removed.

‘They’ve edited the powerpoint to make it a foreign powerpoint. Why?’.

She then filmed the other side of the bathroom which had two sets of taps for the laundry sink and the washing machine. 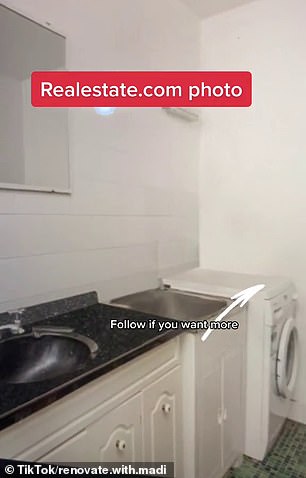 The woman from Perth, who goes by the TikTok username renovate.with.madi , shared two photos of her laundry and how her agent had photoshopped both the taps and the powerpoint socket.

‘Now look at their photo. Gone, they’ve just completely edited the taps out,’ she said after showing the bare wall.

Her video was flooded with comments from many other homeowners saying their agents had done similar things.

One suggested the powerpoint had been turned into an international plug because often the photos for listings would get sent overseas to graphic editors.

Another said real estate agents were allowed to make minor edits like enhancing the colour or brightness but weren’t able to modify a room.

‘We viewed a property recently where the entire backyard had been photoshopped, we got there and it was a mud pit,’ one commented.

‘My neighbour had their roof edited from grey to red so it didn’t draw your eye up,’ said another.

‘Went to a rental this week and they photoshopped doors and windows that weren’t actually there,’ another person wrote.

‘My friends house they edited The Sound Of Music onto every TV. Like why? Does Julie Andrews help sell houses faster?’ someone said.