Honey-based male sex supplements contain some of the same ingredients as Viagra, Cialis

The FDA has issued warnings to four companies that sell honey-based male sexual performance substances, alleging that they include controlled substances.

On Tuesday, the Food and Drug Administration (FDA) revealed that it had issued warnings to four companies that sell honey-based drugs that purport being able to boost a mans sexual stamina and performance.

Drugs sold by these companies include traces of tadalafil and sildenafil – active ingredients in erectile dysfunction drugs like Viagra and Cialis – making them illegal to sell in the U.S. without prescription.

This makes the drugs potentially harmful to use in people who suffer from high blood pressure as hypertension drugs often do not interact well with the controlled substances.

‘Tainted honey-based products like these are dangerous because consumers are likely unaware of the risks associated with the hidden prescription drug ingredients in these products and how they may interact with other drugs and supplements they may take,’ Judy McMeekin, FDA associate commissioner for regulatory affairs said in a statement. 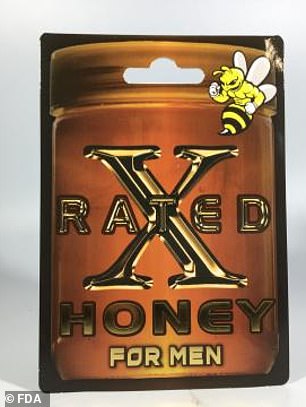 ‘Products marketed with unidentified ingredients may be dangerous and, in some cases, deadly to consumers.’

The FDA writes in letters to each company that it acquired the drugs through an online marketplace.

Samples were then tested in lab environments where the controlled substances were found as active ingredients.

In a letter to US Royal Honey LLC, the agency spells out the potential concerns of using the drugs.

‘Tadalafil and sildenafil are the active ingredients in the FDA-approved prescription drugs Cialis and Viagra, respectively, used to treat erectile dysfunction (ED),’ the agency wrote.

‘These undeclared ingredients may interact with nitrates found in some prescription drugs such as nitroglycerin and may lower blood pressure to dangerous levels.

Drug manufacturer Eli Lilly, which makes Cialis, specifically warns against using the drug if a patient is also using a nitrate to manage another condition.

All of these drugs are specifically marketed towards men who may feel like they are underwhelming in the bedroom, but the FDA also warns that non-sexual claims made about the drugs are problematic and false. 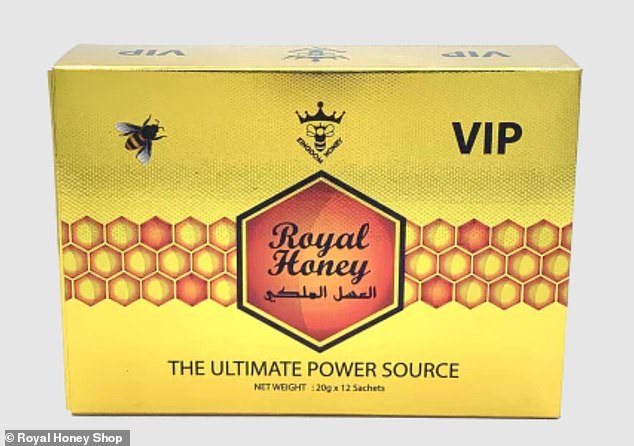 In the letter to MKS Enterprise, the FDA says claims made by the brand that these drugs can prevent arthritis, help heal fracture bones, lower cholesterol and even remedy liver disease – among other claims – are illegal.

‘Your product Vital Honey is intended for treatment of one or more diseases that are not amenable to self-diagnosis or treatment without the supervision of a licensed practitioner,’ the agency writes.

‘Therefore, it is impossible to write adequate directions for a layperson to use your product safely for its intended purposes.’

This is the second time this year the FDA has made a high profile crackdown on these types of drugs and the online retailers that sell them.

Those drugs were all available on popular online retailers like Amazon, eBay and Walmart though have since been removed.