With Hong Kong shaken by 100 days of huge pro-democracy protests, activists have adopted a host of creative ways to fuel their movement away from the barricades.

From laser pen light shows, to flash-mob singalongs and human chains, we look at some of the inventive methods embraced by a movement that shows no signs of abating.

Local residents sing a theme song written by protesters, ‘Glory to Hong Kong’, at a shopping mall in Hong Kong on September 11

The tune that received the most traction early on in this summer’s protests was the catchy Christian hymn ‘Sing Hallelujah to the Lord’ as well as ‘Do you hear the people sing?’ from the musical ‘Les Miserables’.

But in the last fortnight a new anthem has been embraced with gusto.

‘Glory to Hong Kong’ was written by an anonymous composer and has gone viral, its defiant lyrics repeatedly belted out at protests, nightly flash-mob concerts in city malls and even football matches. 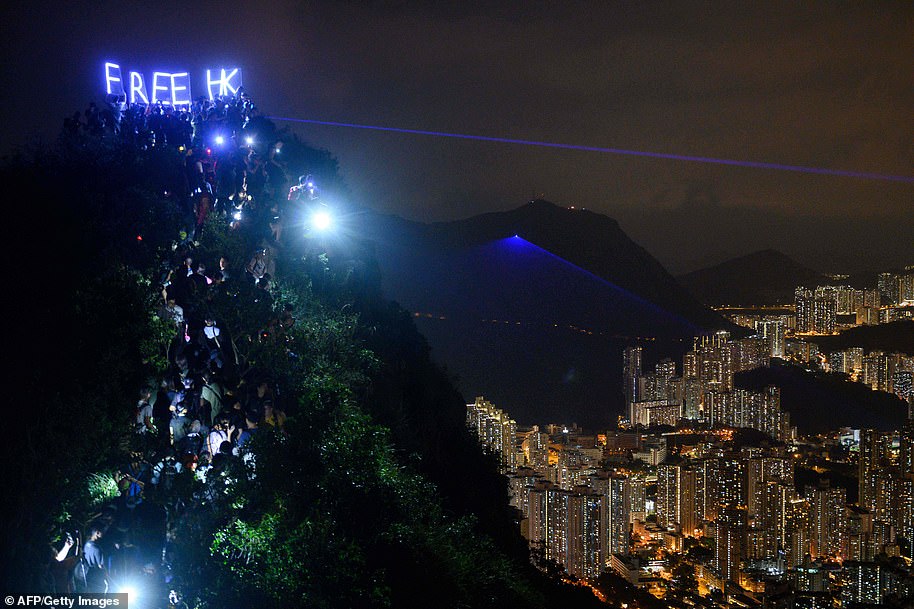 Pro-democracy activists hold up LED letters which read ‘Free HK’ as others shine torch lights, lights from their phones and lasers while forming a human chain on Lion Rock in Hong Kong on September 13 during a demonstration to mark a traditional lunar festival

But they were adopted en masse after a student leader with 10 laser pens in his bag was arrested for possession of an offensive weapon.

Since then demonstrators have held ‘lightshows’ outside of police stations and at most public gatherings, lending the protests a somewhat surreal disco-vibe once the sun sets. 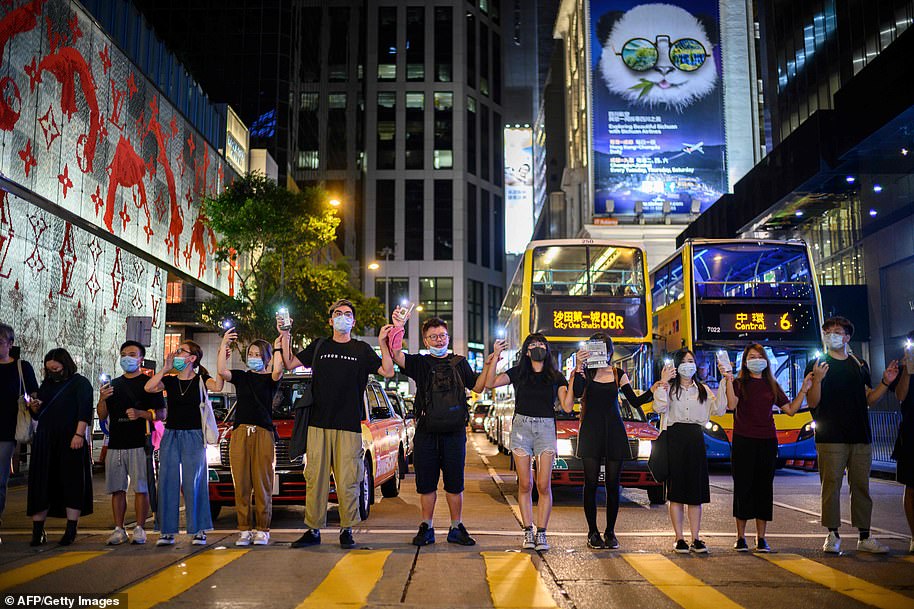 Human chains were first adopted in late August on the 30th anniversary of the Baltic Way, when more than a million people linked arms in huge anti-Soviet Union demonstrations.

The symbol caught on. Tens of thousands have taken part in human chains across the city in recent weeks, some formed on top of famous hills such as the Peak and Lion Rock. Secondary school students have also formed them each morning before classes. 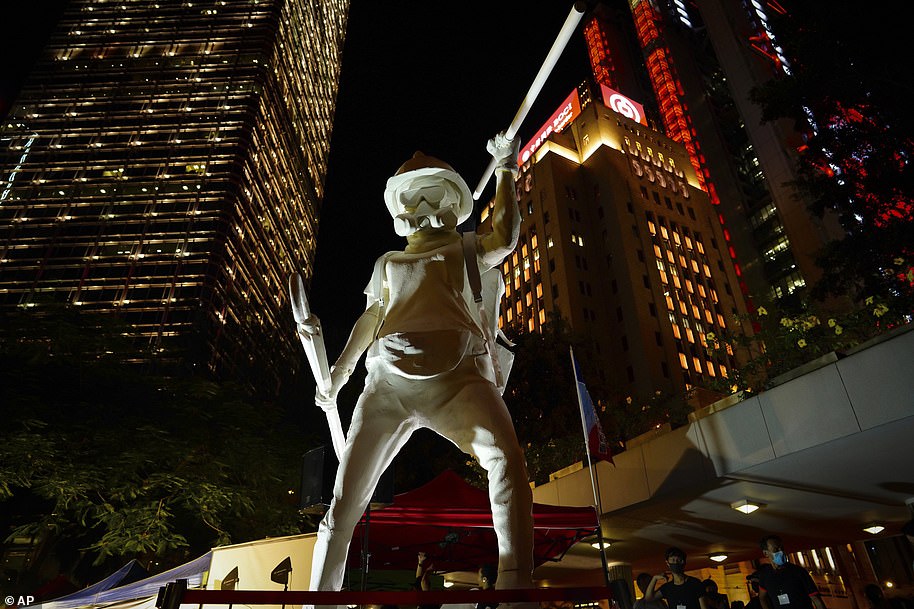 ‘By placing ads internationally, we can break through the filter of the media and show the world the truth underneath the government propaganda,’ a campaign co-organiser, who gave his name as Taylor, told AFP.

Other campaigns have raised money to build a four-metre-tall (13-foot-tall) statue called ‘Lady Liberty Hong Kong’ and provide defence funds for the some 1,400 people arrested. 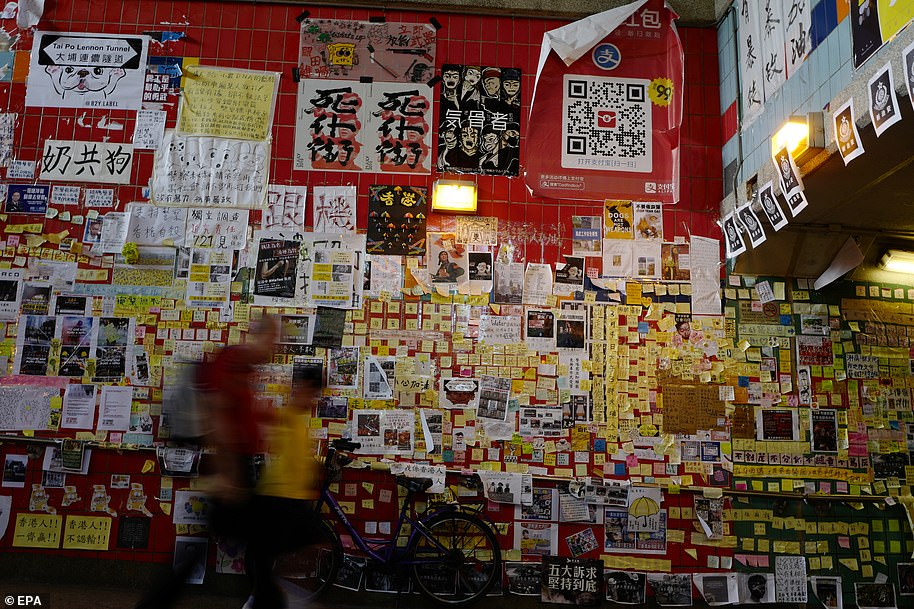 Plastered in colourful sticky-notes, posters and slogans, ‘Lennon Walls’ have sprung up in more than a hundred locations across the city, often in pedestrian tunnels or near subway stations.

The first Hong Kong wall appeared during huge pro-democracy protests in 2014 and was a local take on a public graffiti wall in Prague that appeared after the 1980 murder of John Lennon.

When crowds of government supporters tore down a Lennon Wall outside the city’s parliament early on in this summer’s protests, democracy activists simply created new ones in their local neighbourhoods. Walls are still being torn down by opponents but they reappear within hours. 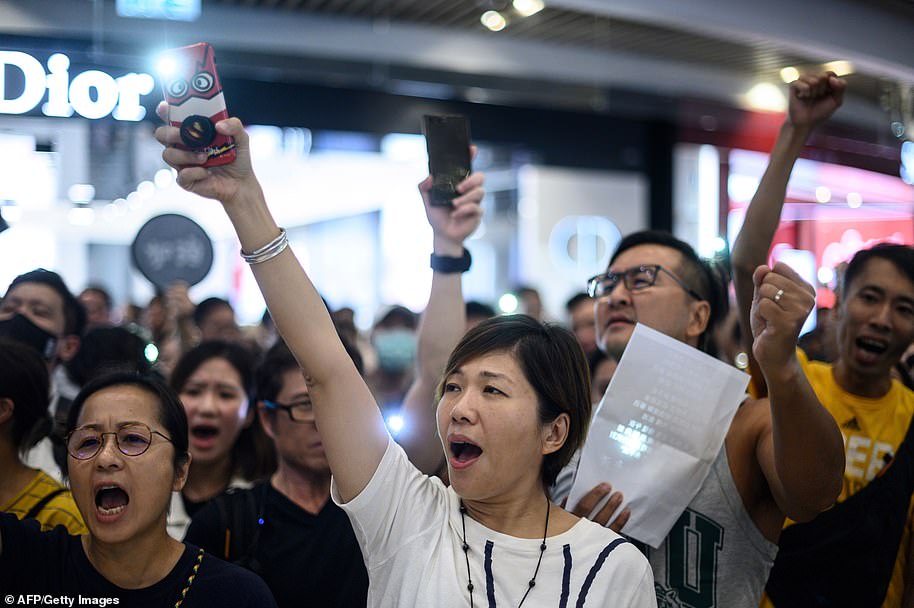 Hong Kongers have taken to shouting protest slogans from their apartments each night at 10pm, inspired by cacerolazos, a form of protest that emerged in authoritarian Chile during the 1970s and has since been adopted by multiple dissent movements.

In a city renowned for the highest concentration of skyscrapers in the world, the chanting is particularly effective, with popular slogans such as ‘Liberate Hong Kong, revolution now’ and ‘No rioters, only tyranny’ bouncing off buildings and echoing through neighbourhoods. 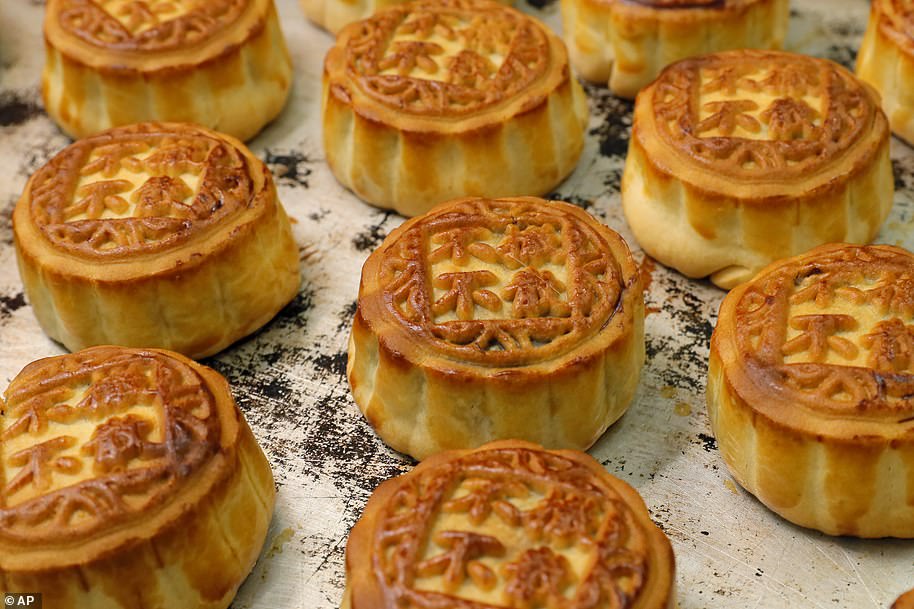 Mooncakes with Chinese words “No withdrawal, no dispersal” are placed on the table at Wah Yee Tang bakery in Hong Kong on August 9

Traditionally given during the mid-autumn festival, these dense pastries have been given a protest makeover. One bakery has sold tens of thousands of cakes which sport popular protest slogans on their crusts.

Painting, calligraphy, comic strips, sculptures – Hong Kongers have been working around the clock to provide an artistic backdrop to their protests.

Much of the art is distributed in a highly modern fashion – shared on online forums or pinged to people’s phones using Bluetooth and Airdrop.

It is not unusual for someone’s phone to receive multiple digital flyers and posters each day, especially on the subway.

Soon the same artworks are printed and placed on the city’s Lennon Walls, which have become a constantly evolving canvas of dissent. 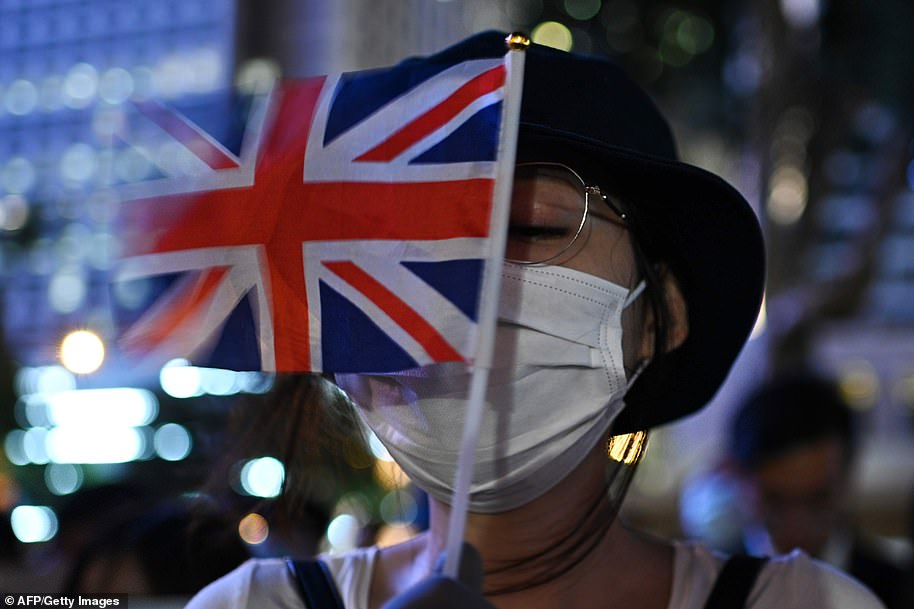 Small groups of protesters have waved the flags of Britain, colonial era Hong Kong and the United States.

But by far the most common flag is the ‘wilted bauhinia’ — a twist on Hong Kong’s official flag, a white bauhinia flower on a red backdrop.

The new flag has turned the backdrop black, to reflect the mood of the streets, and the bauhinia flower is wilted and blood-stained.

Another popular emblem directed at Beijing is dubbed ‘Chinazi’ — a red flag with yellow stars in the shape of a swastika.

Inventiveness has been a core principle of the protests themselves with the phrase ‘Be water’ commonly chanted.

The slogan references a philosophy of unpredictability espoused by local kung fu legend Bruce Lee and encourages protesters to keep mobile in a bid to stretch police resources and avoid mass arrests.

Protesters have also found creative ways to hold rallies that are banned, portraying them instead as opportunities to go window shopping, hold picnics or gather for religious meetings.