Hong Kong leader Carrie Lam will not accept any of the five demands laid out by the city’s protesters anytime soon, an insider has revealed.

The city’s government is also planning a long-term battle with demonstrators, hoping that continuous crackdowns from the police will wear out and eventually break down activists, the insider told Hong Kong media.

Hong Kong, a semi-autonomous Chinese territory, has seen more than two months of youth-led protests that have often ended in clashes with police. 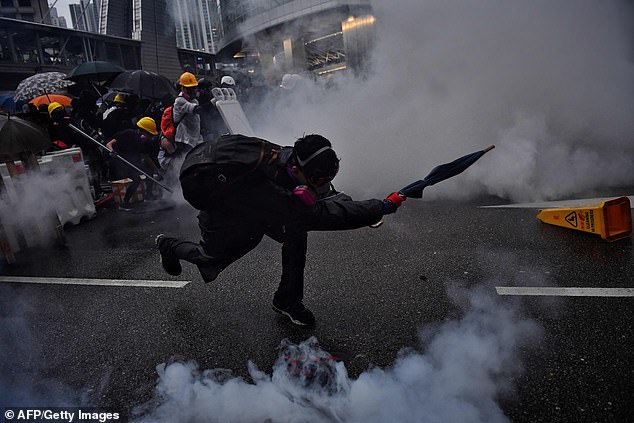 An insider said the city’s government was unlikely to cave in to the protesters anytime soon. Pictured, protesters return tear gas in Tsuen Wan on August 25 in the latest clashes 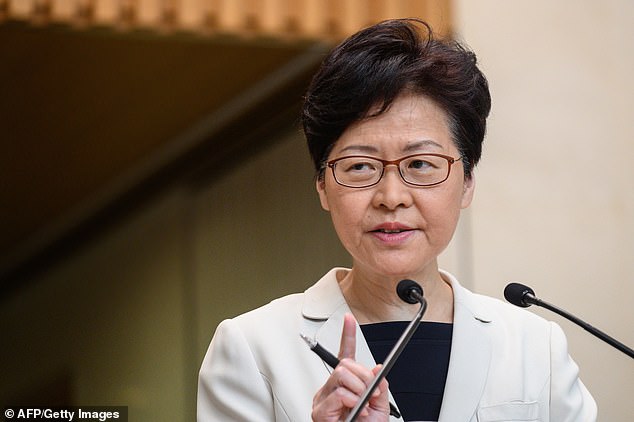 The anti-government movement was sparked by a now-suspended proposed bill that would allow people to be extradited from the city to stand trial in courts in mainland China.

The demands from protesters include the complete withdrawal of the extradition bill, an independent enquiry to police violence and genuine universal suffrage. 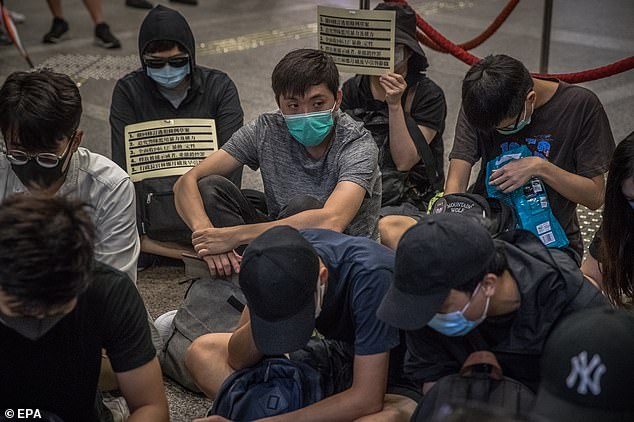 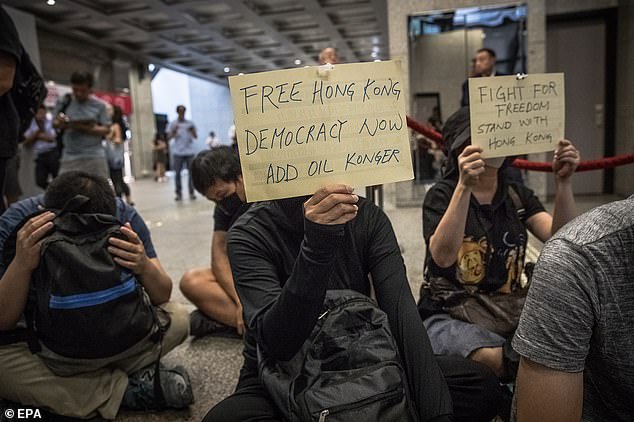 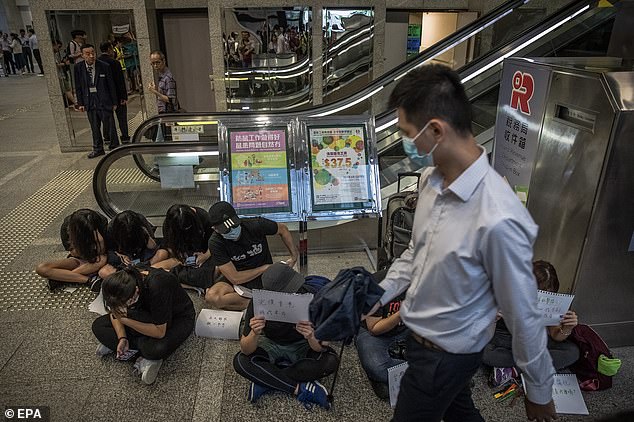 What do Hong Kong protesters want?

Apart from the resignation of Chief Executive Carrie Lam, Hong Kong demonstrators have listed five demands and have continued to urge the government to respond to them.

These five demands are:

1. A complete withdrawal of the extradition bill

2. A retraction from the government to its characterisation that the protesters were ‘rioters’

3. Unconditional and immediate release of protesters who were arrested and charges against them dropped

4. Establishment of an independent enquiry to investigate police violence during clashes

An insider from the city’s pro-Beijing camp told local news outlet HK01.com that high-level government officials in Hong Kong had not agree to an independent investigation into the police’s actions out of fear that it would dishearten anti-riot officers, which would make it even harder for the authorities to deal with the ongoing demonstrations.

Had the government only agreed to one or two demands, the protesters would not stop rallying either, the same insider said.

It was also alleged that the Hong Kong government had planned for ‘attrition warfare’ with demonstrators in a bid to wear them out.

The government would not consider an independent enquiry until most of the core activists are arrested and few people are left to ‘fight’, according to the person-in-the-know.

The city’s Beijing-backed Chief Executive Carrie Lam yesterday met with a group of young people about ongoing pro-democracy protests, but she showed no sign of budging on any of the protesters’ demands. 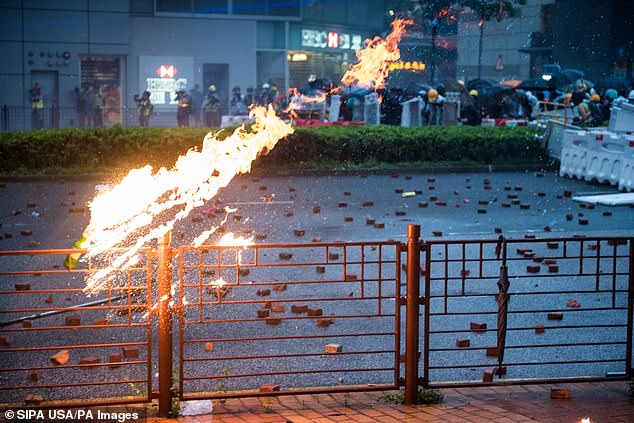 A molotov cocktail thought to have been thrown by protesters lands in no-mans land during the demonstration on Sunday. The clashes were some of the worst in 12 weeks of unrest 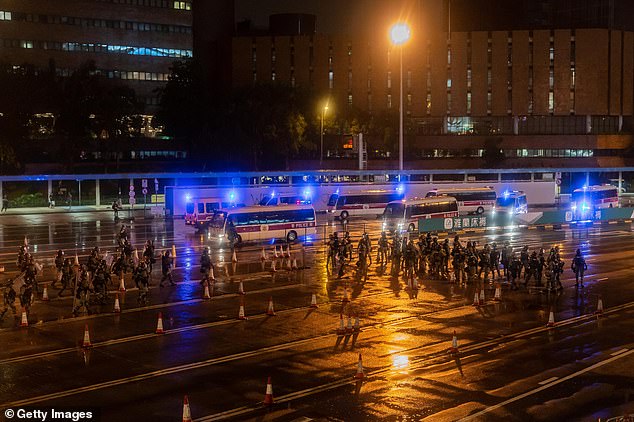 Police stand guard after protesters broke the gates of the Cross-Harbour Tunnel Sunday night. During clashes officers fired water cannon and a warning shot using a live bullet into the air 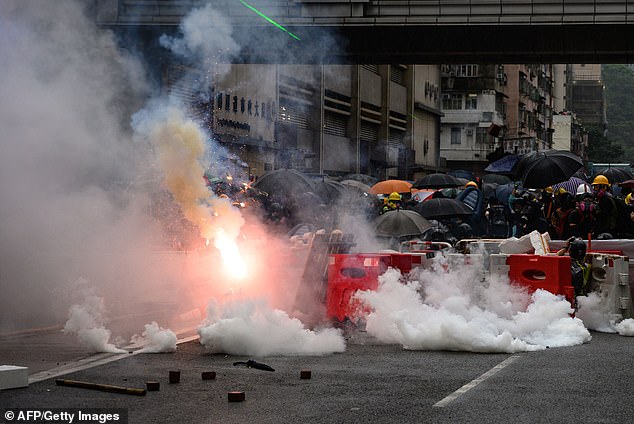 Mrs Lam said she explained the government’s position on the five demands of the protest movement at the Monday meeting, which was closed-door and unannounced.

She disputed criticism that her government is ignoring the protesters, whose demands include democratic elections, the dropping of charges against arrested protesters and an independent enquiry into what they believe is excessive use of force by police to quell the demonstrations.

The government said on Monday illegal violence was pushing Hong Kong to the brink of great danger after weekend clashes that included the first gun-shot and the arrest of 86 people, the youngest just 12.

Protesters built barriers across the roads and threw bricks and petrol bombs to try to block the police advance.

Mrs Lam announced last week that she is creating a platform for dialogue and said on Tuesday that it would include protesters.

Opposition politicians have questioned the sincerity of her initiative, calling it a delay tactic.

The education and home affairs ministers also took part in Monday’s meeting. The South China Morning Post newspaper, citing an unnamed source, said about 20 people took part and that they were mostly in their 20s and 30s. 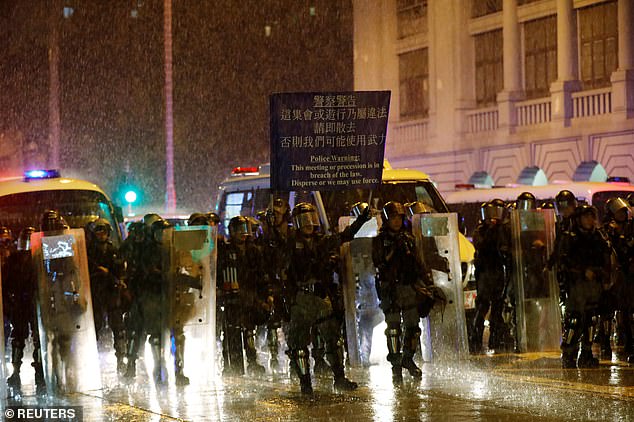 During one of the protests on Sunday, riot police hold a sign saying ‘this meeting or procession is in breach of the law. Disperse or we may use force’ as they blocked off a road in the rain 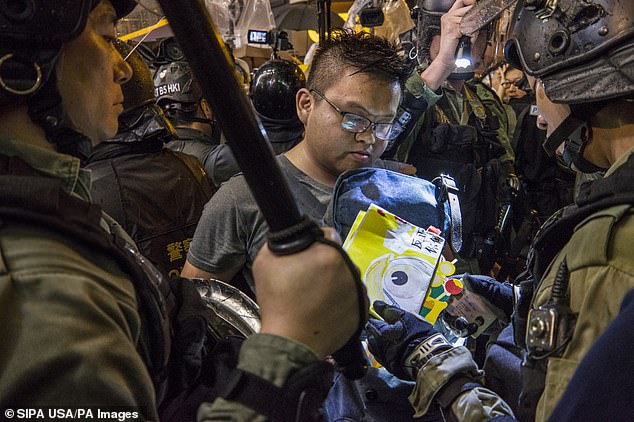 Mrs Lam dismissed any suggestion of her resignation, telling reporters that a responsible chief executive should continue ‘to hold the fort and do her utmost to restore law and order in Hong Kong’.

More demonstrations are planned over coming days and weeks, posing a direct challenge to authorities in Beijing, who are eager to quell the unrest ahead of the 70th anniversary of the founding of the People’s Republic of China on October 1.

After the clashes on Saturday, China’s state news agency Xinhua stressed Beijing’s authority and responsibility in cracking down any ‘riots’ in Hong Kong.

A commentary from the agency said on Saturday that ‘if riots happen, the central government will need to intervene’, citing late Chinese leader Deng Xiaoping who proposed the ‘one country, two systems’ policy during Hong Kong’s handover negotiations between China and the UK in the 1980s.

The policy was to guarantee Hong Kong greater freedoms than those on the mainland until 2047, such as freedom of speech and people’s right to protest.