Violent clashes between pro-democratic Hong Kong supporters and riot police have continued today, as part of a coordinated day of global protests aimed at casting a shadow over communist China’s upcoming 70th birthday.

Thousands of protesters regrouped after police fired tear gas at them Sunday and marched along a thoroughfare in downtown Hong Kong in a second straight day of defiance, sparking fears of more violence ahead of China’s National Day.

Protesters, many clad in black with umbrellas and carrying pro-democracy posters, sang songs and chanted ‘Stand with Hong Kong, fight for freedom’ as they took over a stretch of a road over 1 kilometer (1.6 mile) long and headed toward the government office complex.

Many fled earlier after riot police fired multiple rounds of tear gas to disperse a large crowd that amassed at the Causeway Bay shopping area and threw objects in their direction. But protesters returned to start their march, some carrying American, British and other foreign flags.

They were also blasted by water cannons, which is believed to contain an irritant blue dye to stain the protestors’ clothes.

Some of them defaced, tore down and burnt signages congratulating China’s Communist Party, which will mark its 70th year in power on Tuesday. Others sprayed graffiti along walls and smashed windows at a subway exit. A police helicopter was hovering above.

Many marchers were holding so-called ‘Chinazi flags’, a version of the Chinese flag where the yellow stars are arranged in the shape of a swastika.

Hong Kong’s pro-democracy supporters raise international flags, including for the United Nations, UK and USA, as they walk down a major thoroughfare in downtown Hong Kong 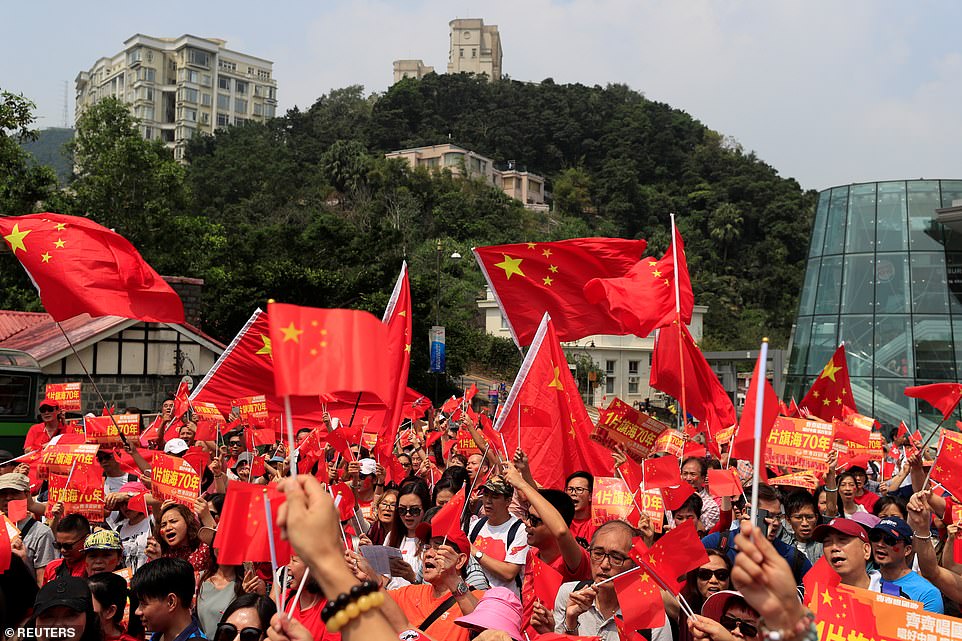 Earlier today, hundreds of pro-China supporters gathered on Victoria Harbour to sing the National Anthem, as they look to mark the 70th anniversary of the country’s founding 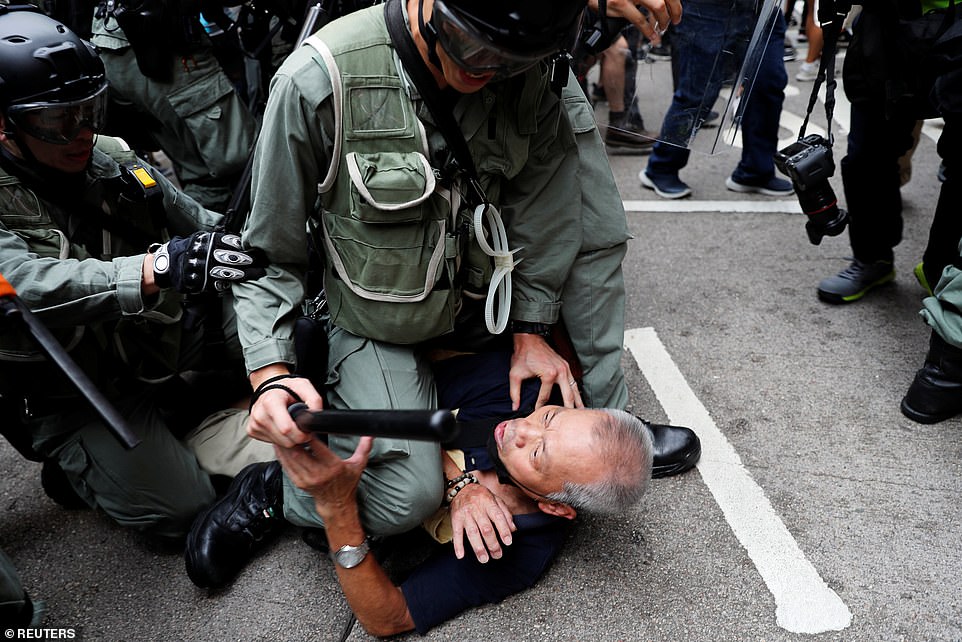 Riot police pin down and arrest an elderly protestor from a demonstration in the Causeway Bay shopping district, as the city descends into a second day of clashes ahead of China’s National Day later this week 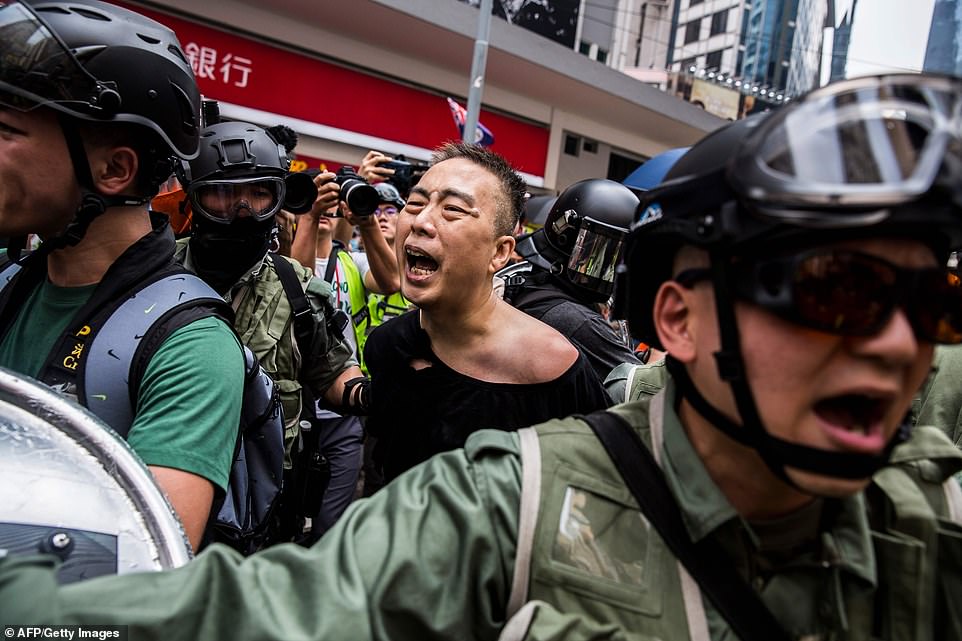 A pro-democracy Hong Kong protestor has his shirt ripped as he is detained within a police formation. Protesters are also planning to march on Tuesday, the country’s National Day, despite a police ban 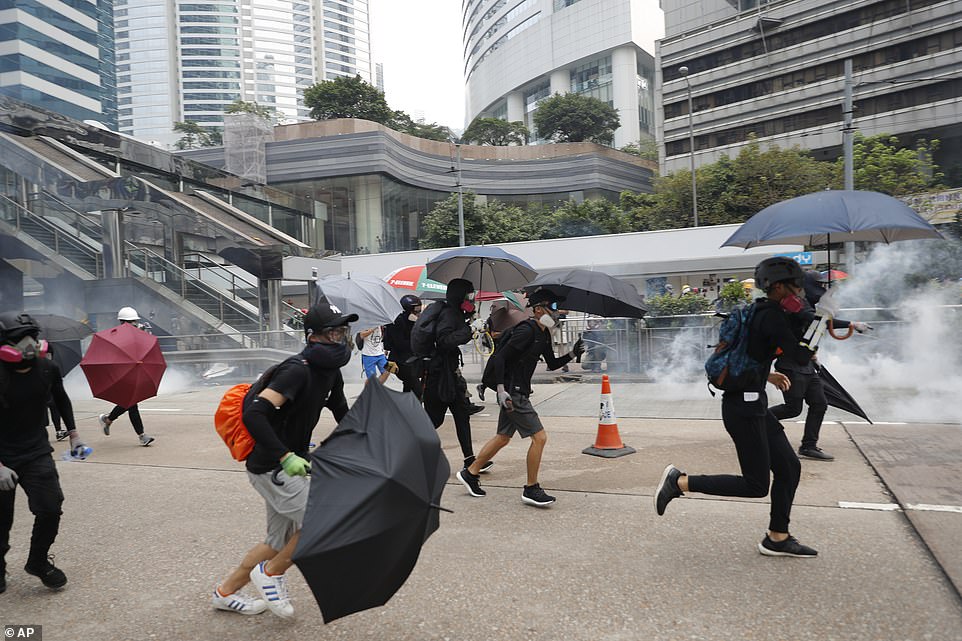 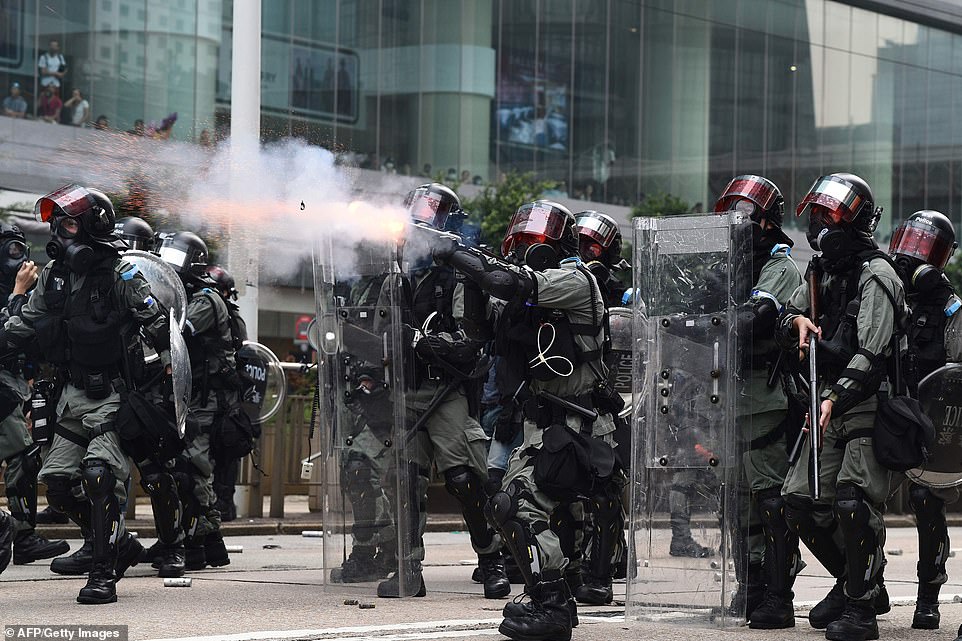 Many fled earlier after riot police fired multiple rounds of tear gas to disperse a large crowd that amassed at the Causeway Bay shopping area and threw objects in their direction. But protesters returned to start their march, some carrying American, British and other foreign flags 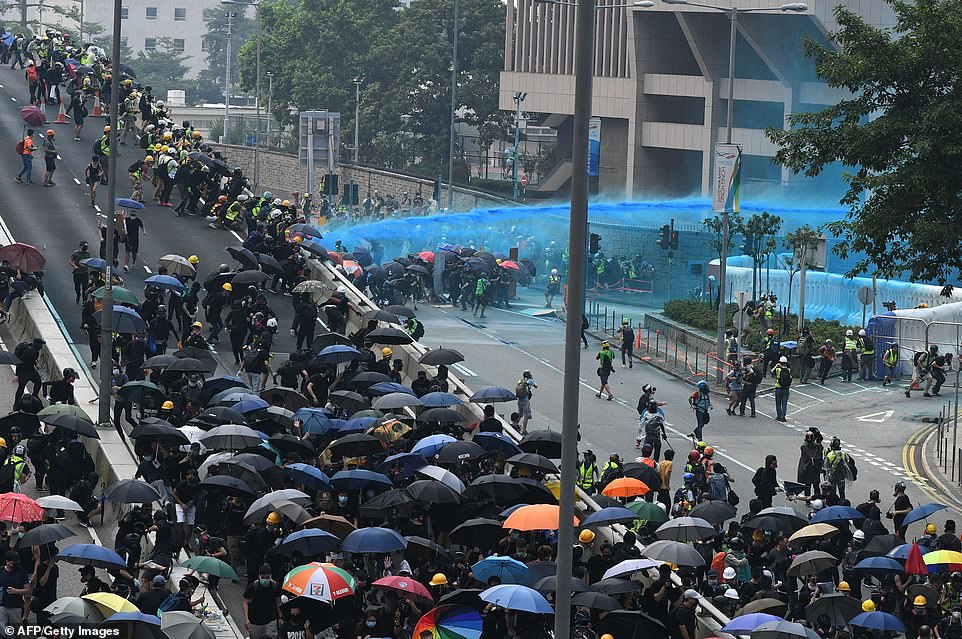 As protestors walked along a motorway bridge, they were also blasted by water cannons, which is believed to contain an irritant blue dye to stain their clothes

Sunday’s gathering, a continuation of months-long protests for greater democracy in the semi-autonomous Chinese territory, is part of global ‘anti-totalitarianism’ rallies planned in over 60 cities worldwide to denounce ‘Chinese tyranny.’

In Sydney, more than a thousand people rallied in support of pro-democracy protests in Hong Kong, yelling ‘Fight for freedom’ and ‘Stand with Hong Kong.’

Marches were also held in Australia and Taiwan, which is still battling for international recognition, with more planned in Europe and North America later in the day.

On Saturday, police also fired tear gas and water cannons after protesters threw bricks and firebombs at government buildings following a massive rally in downtown Hong Kong. The clashes were part of a familiar cycle since protests began in June over a now-shelved extradition bill and have since snowballed into an anti-China movement.

Protesters are also planning to march on Tuesday despite a police ban, sparking fears of more ugly scenes that could embarrass Chinese President Xi Jinping as his ruling Communist Party marks the 70th anniversary.

Many said they will wear mourning black in a direct challenge to the authority of the Communist Party, with posters calling for October 1 to be marked as ‘A Day of Grief.’

Hong Kong’s government has already scaled down National Day celebrations in the city, canceling an annual firework display and moving a reception indoor.

Despite security concerns, the government said Sunday that Chief Executive Carrie Lam will lead a delegation of over 240 people to Beijing on Monday to participate in the festivities. She will be represented by Chief Secretary Matthew Cheung in her absence and return to the city on Tuesday evening. 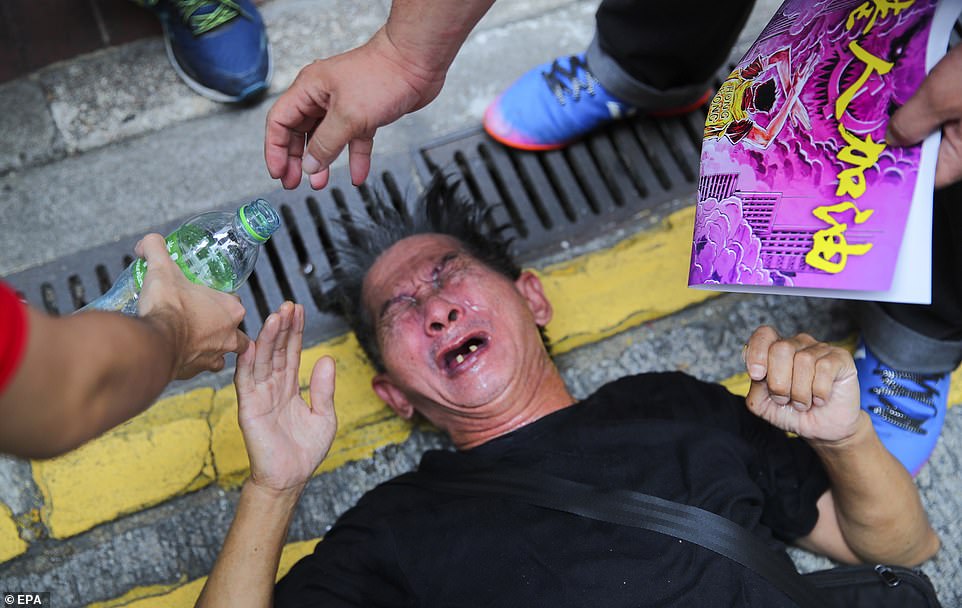 Pro-democracy supporter douse an tear-gassed man’s face with water and lies in the road. The protestors have regathered following an earlier attempt to separate them by police 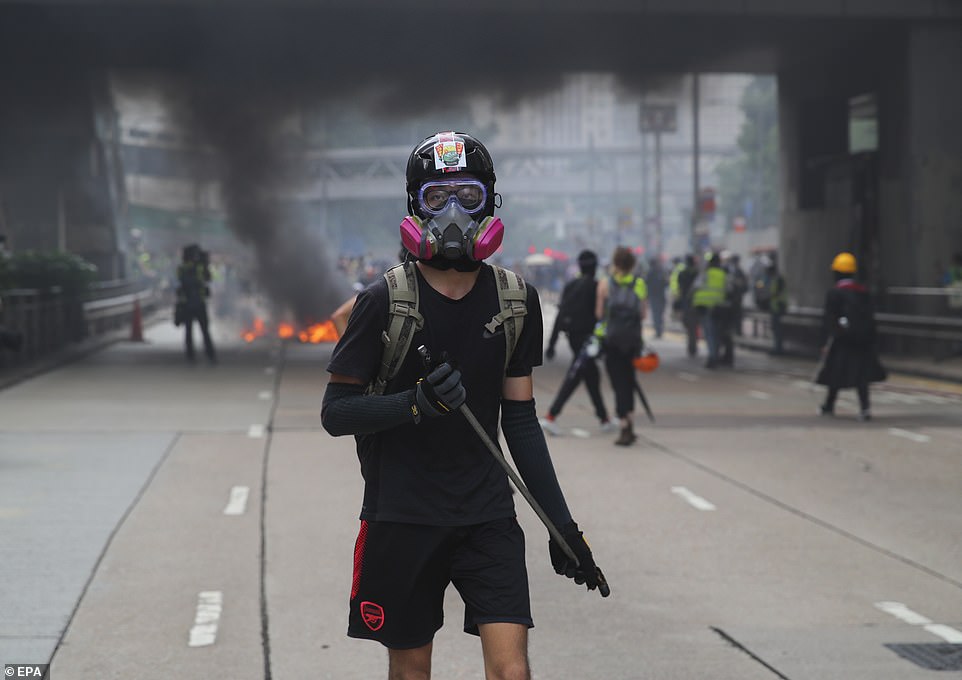 A gas mask clad protestor holds a baton in the middle of a closed road as the clashes between riot police and pro-democracy protestors continues. The city has entered its fourth month of mass protests sparked initially by a now suspended extradition bill to mainland China 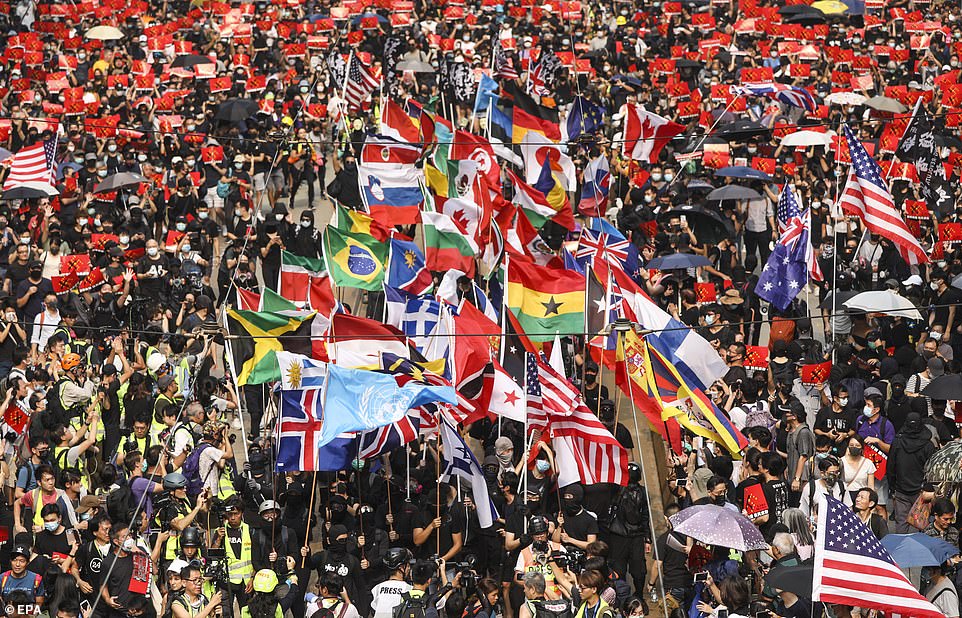 Lam held her first community dialogue with the public on Thursday in a bid to diffuse tensions but failed to persuade protesters, who vowed to press on until their demands including direct elections for the city’s leader and police accountability are met.

Earlier Sunday, hundreds of pro-Beijing supporters sang the national anthem and happy birthday to China in a counter show of solidarity for Chinese rule. Wearing red and carrying Chinese flags and posters, they chanted ‘I am a citizen of China’ at a waterfront cultural center. They were later bused to the Victoria Peak hilltop for the same repertoire.

Organizer Innes Tang said the crowd, all Hong Kong citizens, responded to his invitation on social media to ‘promote positivity and patriotism’ and urged protesters to replace violence with dialogue.

‘We want to take this time for the people to express our love for our country China. We want to show the international community that there is another voice to Hong Kong’ apart from the protests, he said.

Mobs of pro-Beijing supporters have appeared in malls and on the streets in recent weeks to counter pro-democracy protesters, leading to brawls between the rival camps.

Many people view the extradition bill, that would have sent criminal suspects to mainland China for trial, as a glaring example of the erosion of Hong Kong’s autonomy under the ‘one country, two systems’ policy when the former British colony returned to Chinese rule in 1997.

Under the policy, China offered Hong Kong certain liberties denied to citizens on the mainland – including freedom of expression, unfettered access to the internet and an independent judiciary. 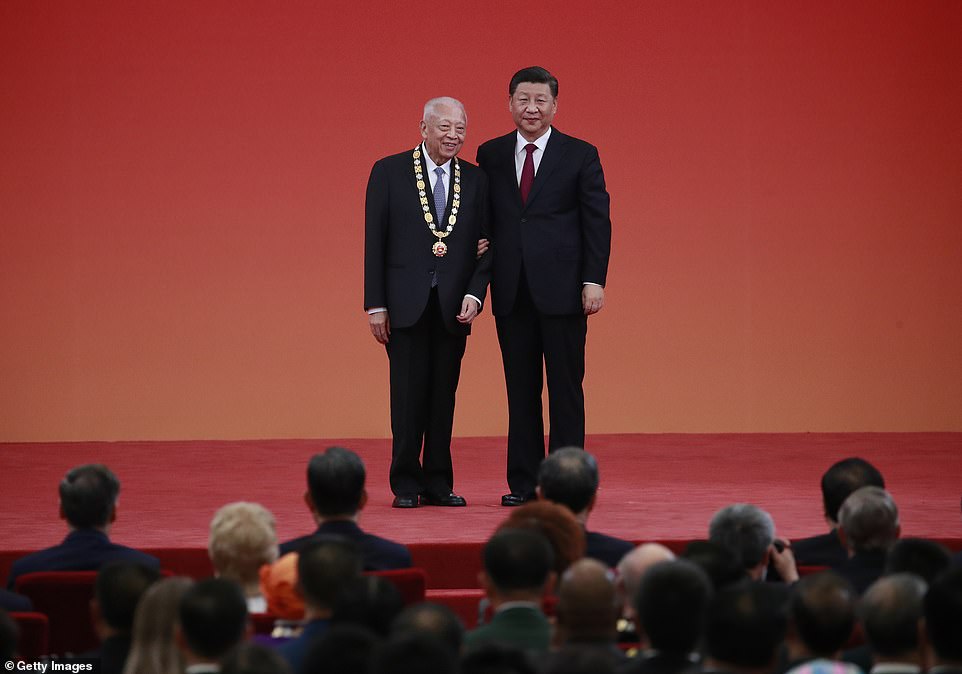 In Beijing on Sunday, former Hong Kong leader Tung Chee-hwa was recognized for devoting himself to the implementation of the ‘one country, two systems’ policy 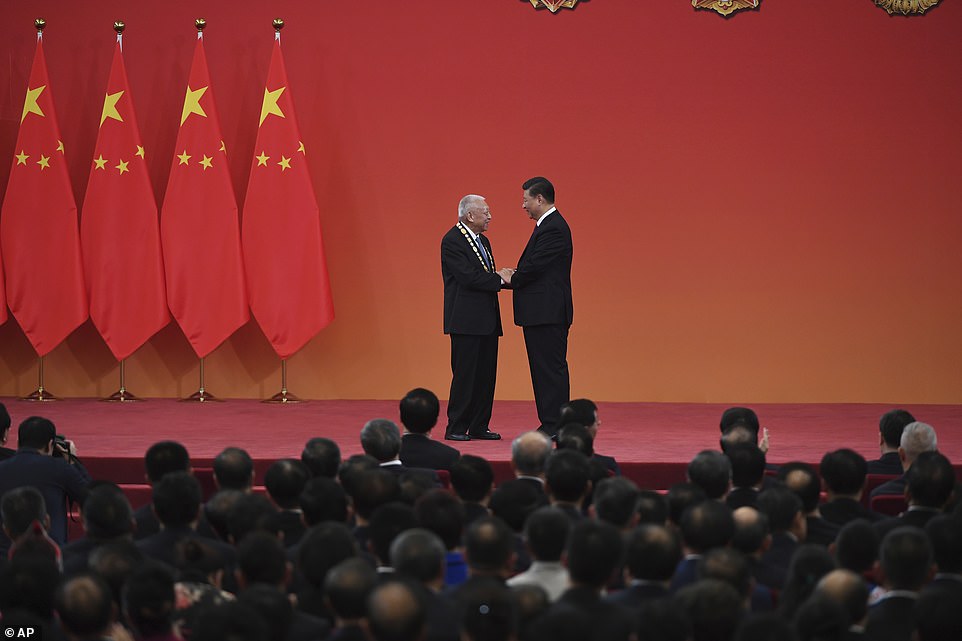 Tung, the first leader after Hong Kong’s return to China, was among 42 people, including a Nobel Prize winner and former French Prime Minister, who received national medals and honors from Xi for their contributions to the country 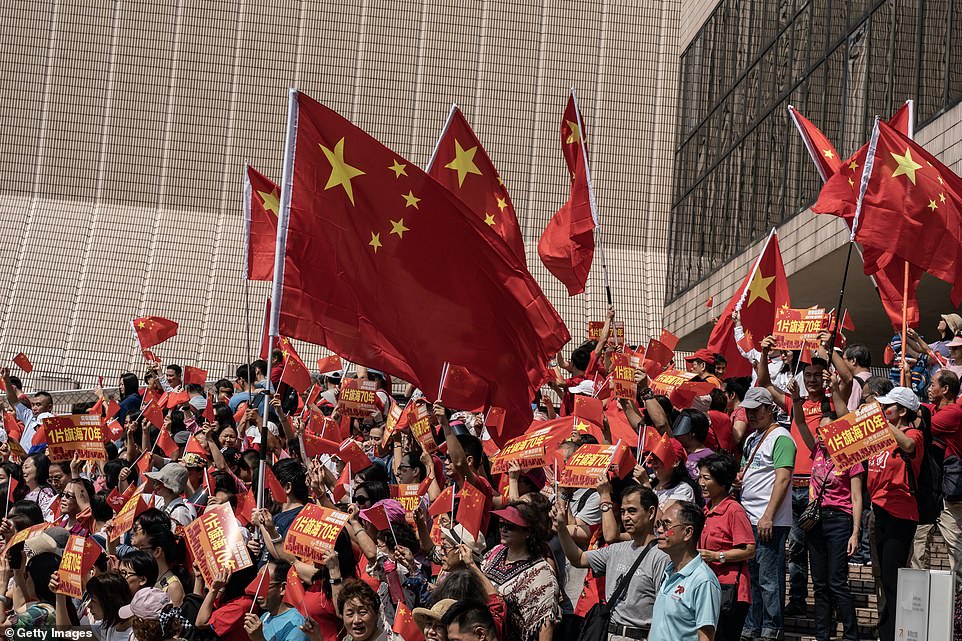 But it is claimed some of the freedoms guaranteed in the arrangement, which is due to expire in 2047, have already been chipped away by Beijing in recent years.

Protesters are calling for an independent inquiry into the police, an amnesty for those arrested and the right to elect their leaders — demands repeatedly dismissed by Beijing and city leader Carrie Lam.

In Beijing on Sunday, former Hong Kong leader Tung Chee-hwa was recognized for devoting himself to the implementation of the ‘one country, two systems’ policy. Tung, the first leader after Hong Kong’s return to China, was among 42 people who received national medals and honors from Xi for their contributions to the country.

President Xi this Tuesday will stage one of the largest military parades ever to make its way through central Beijing, celebrating not only the 70th anniversary of the People’s Republic, but also attempting to solidify his grip on the country.