Hong Kong police fired tear gas and water cannon today as they tried to disperse pro-democracy protests that have plunged the Chinese-ruled city into its worst political crisis in decades.

Police fired round after round of tear gas and pummelled protesters with blue-dyed jets of water as they took cover beneath umbrellas between the local headquarters of China’s People’s Liberation Army and government HQ.

Protesters hurled bricks and petrol bombs at the police in return.

The clashes came on the fifth anniversary of a decision by China to curtail democratic reforms in the former British colony, which returned to China in 1997.

The PLA on Thursday rotated its troops in Hong Kong in what it said was a routine operation. Their Hong Kong HQ was the former base of the British military garrison. 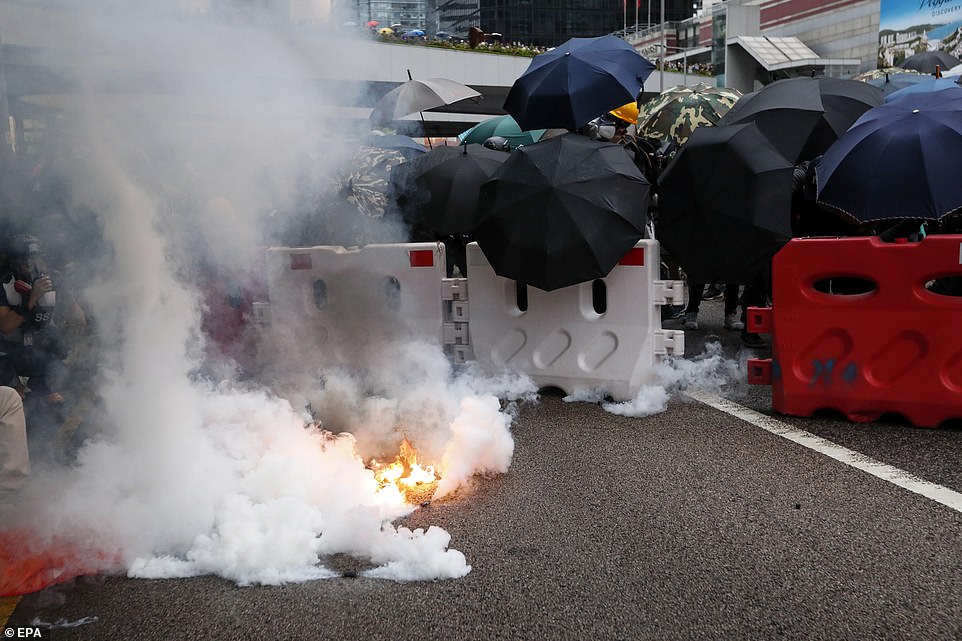 Protesters with their umbrellas react after police fired tear gas during an anti-government rally in Hong Kong, 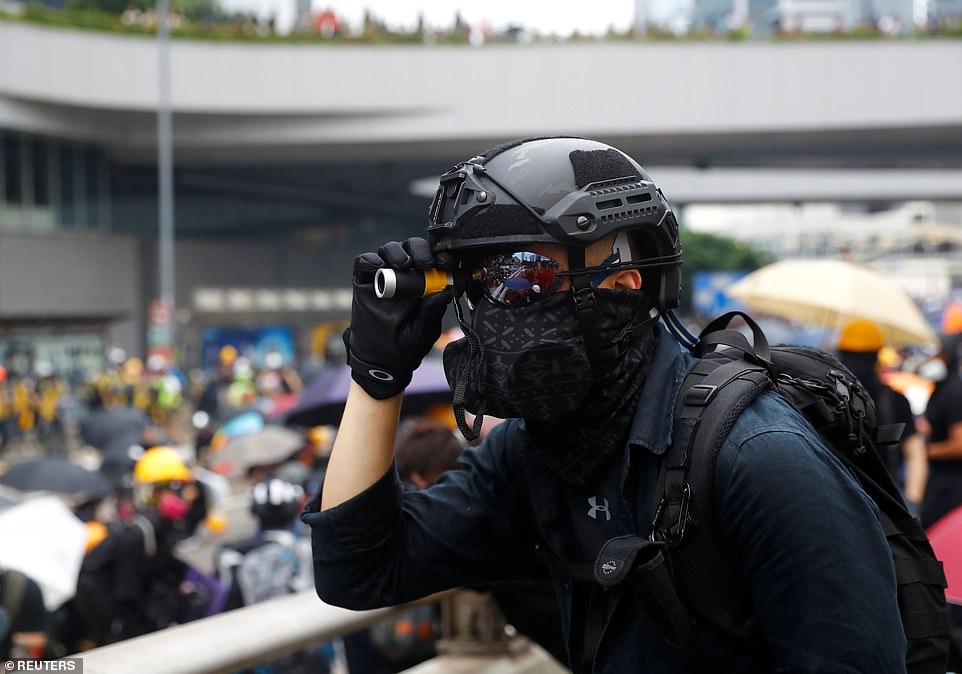 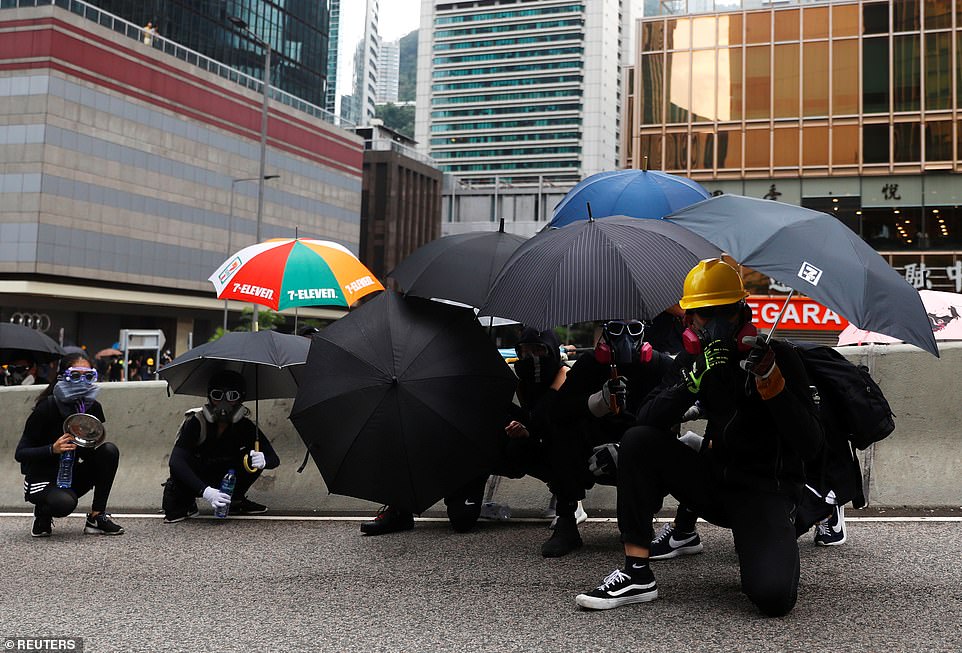 Demonstrators take positions during a protest in Hong Kong

It was latest in a string of protests over three months, some of which have turned violent, targeting the airport, the legislature and the Liaison Office, the symbol of Chinese rule.

‘Hong Kong has religious freedom,’ Sally Yeung, 27, a Christian, told Reuters. ‘We are praying at different check points and praying for justice to arrive in Hong Kong.

‘If they prosecute us simply because we are praying, they infringe our religious freedom.’

Hovering under an umbrella outside the government offices, Eric, a 22-year-old student, said telling people not to protest was like telling them not to breathe.

‘I feel it’s my duty to fight for democracy,’ he said. ‘Maybe we win, maybe we lose. But we fight.’

Police erected water-filled plastic barriers around key government buildings and two water cannon, used briefly for the first time last weekend, were parked near the Liaison Office, which was daubed with graffiti in an earlier protest. 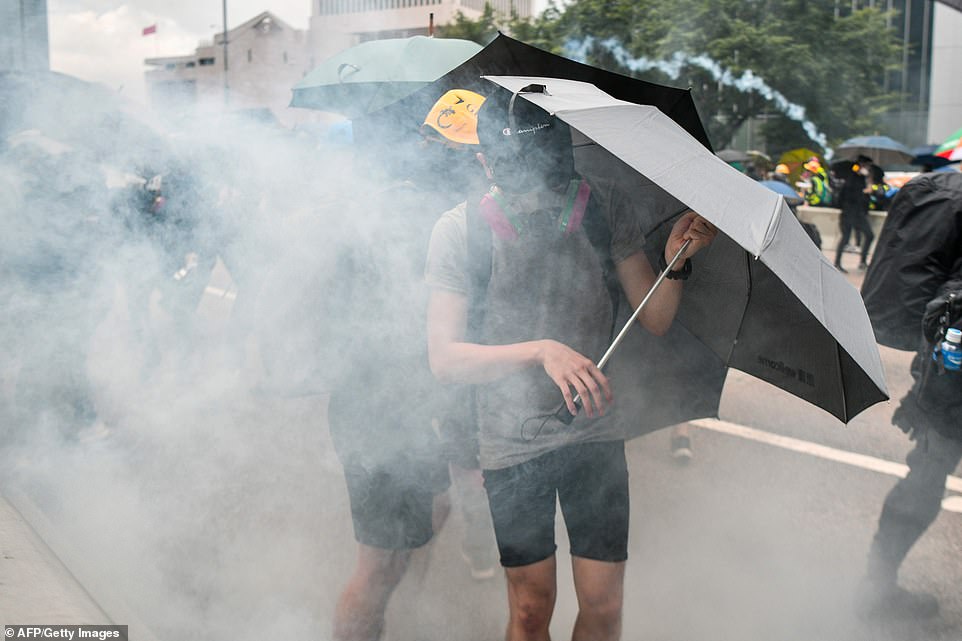 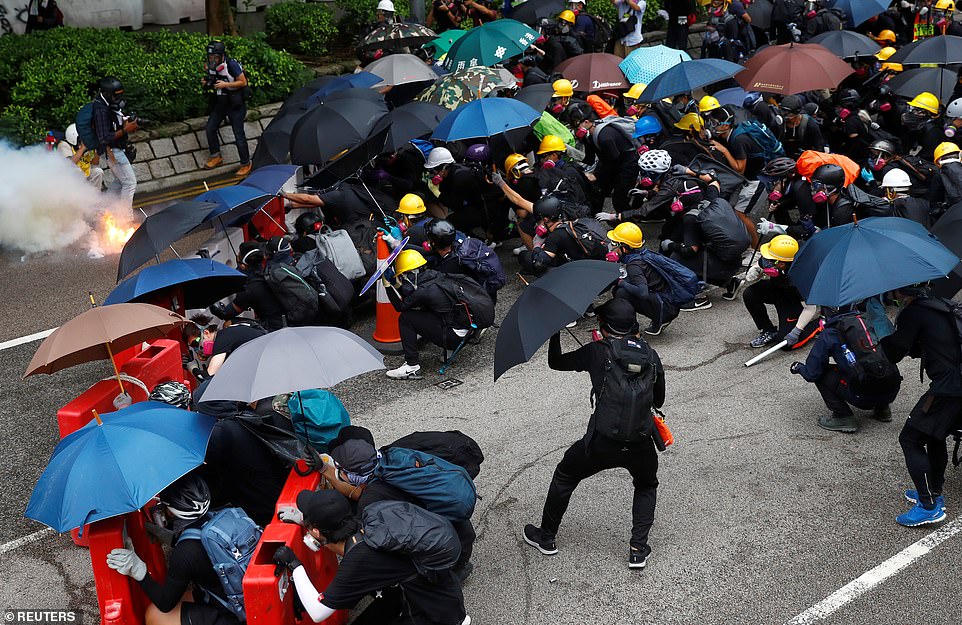 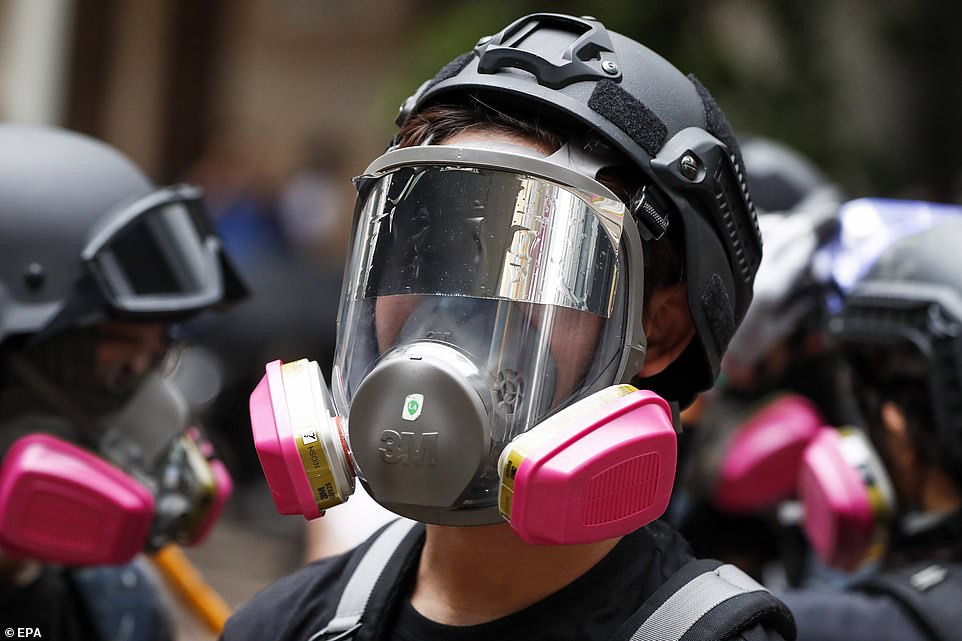 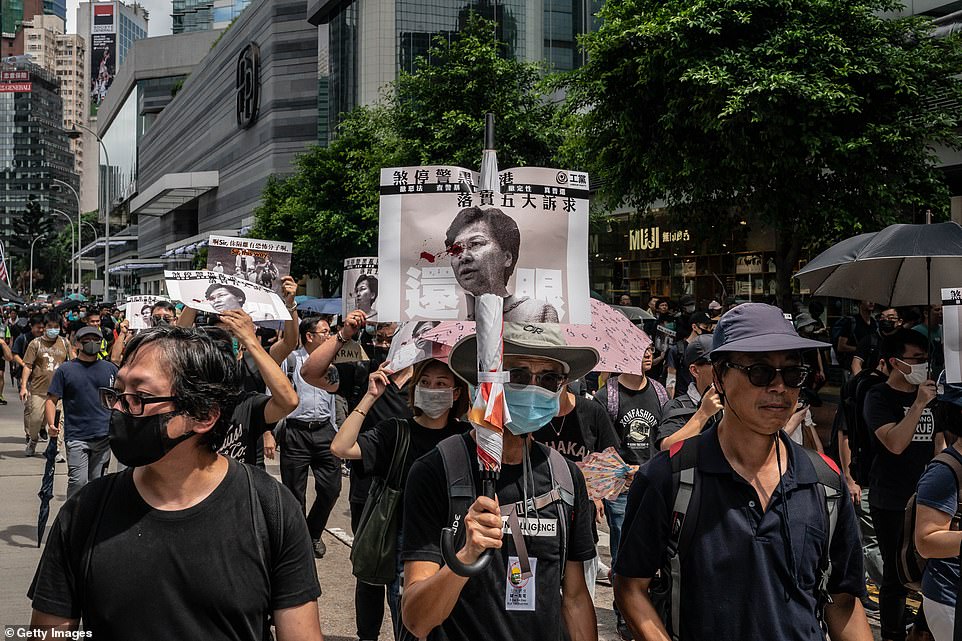 The MTR subway suspended some services and shut station exits because of likely ‘public activities’.

Earlier today a masses of old and young alternated between singing hymns and chanting the slogans of the pro-democracy movement as they march from a Methodist church and then onto police headquarters.

Among them, a man dressed as Moses with a tablet of the ‘Five Commandments,’ a reference to the five demands that have been brought by the activists.

An online flyer for the demonstration called it a ‘prayer for sinners’ and had a Christian cross and a picture of Hong Kong’s embattled leader Carrie Lam.

Religious meetings do not require police approval, but police said late Friday that a procession with more than 30 people does.

The participants in the religious march were peaceful and mostly older than the younger protesters who have led this summer’s movement and, in some cases, blocked streets and battled police with bricks, sticks and gasoline bombs.

Authorities turned down an application from another group for a major march but were preparing for widely anticipated unauthorised demonstrations. 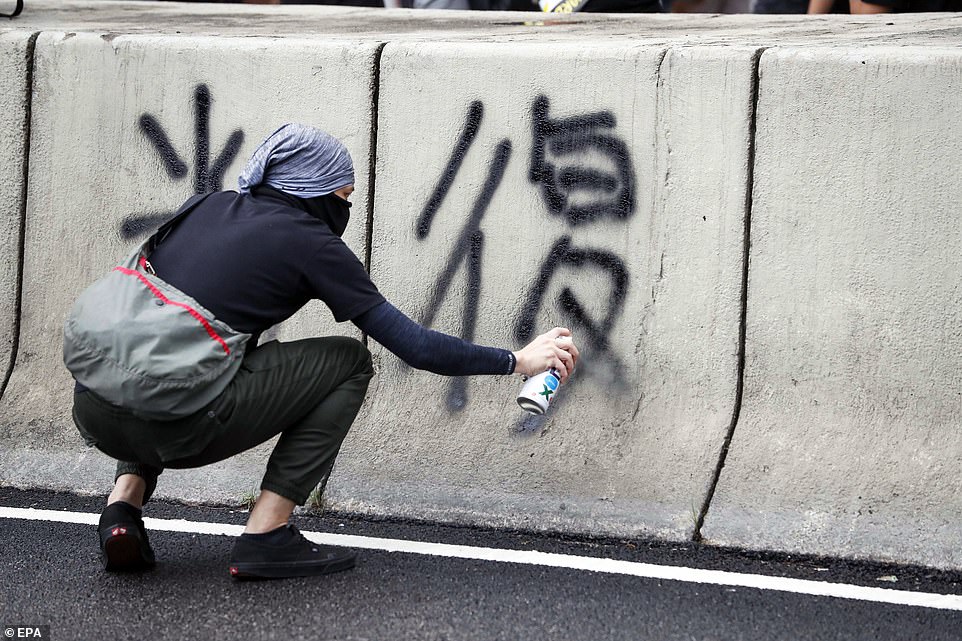 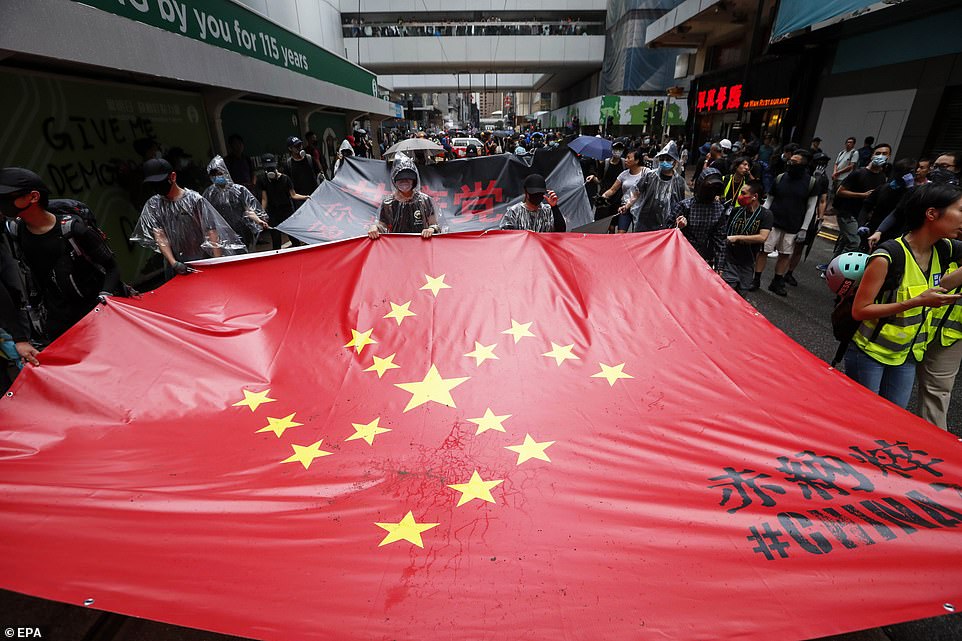 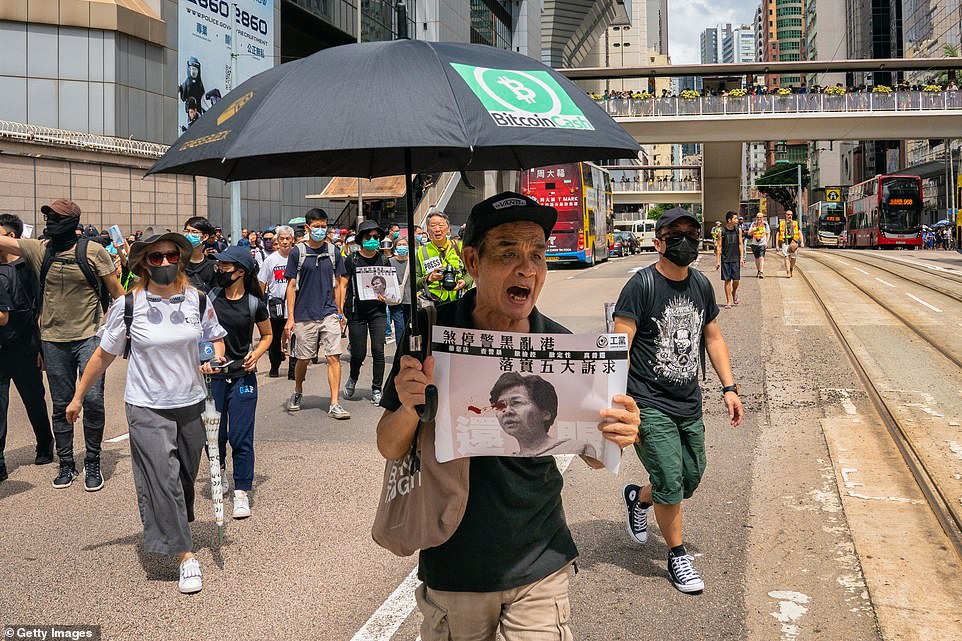 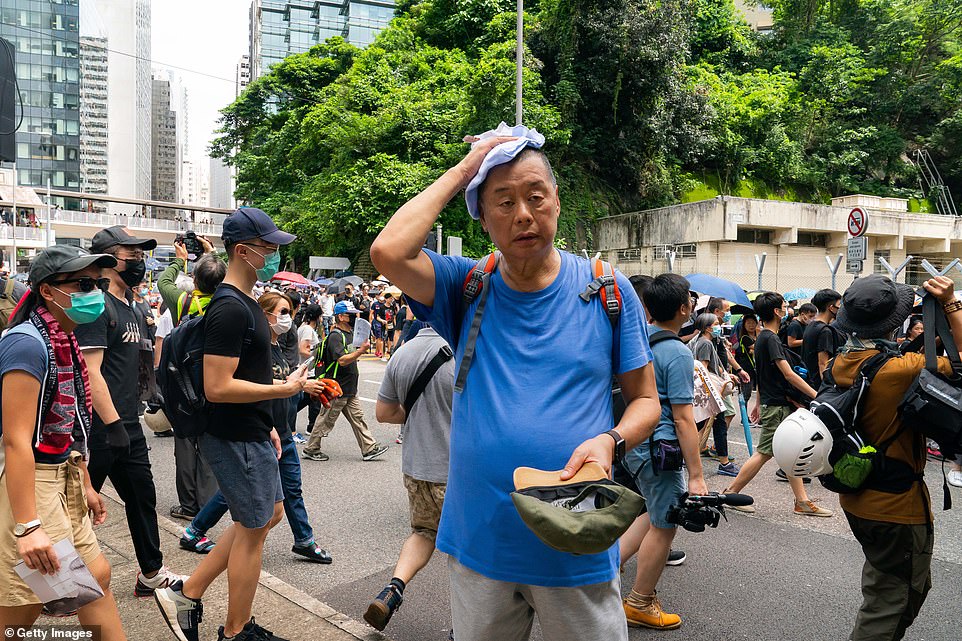 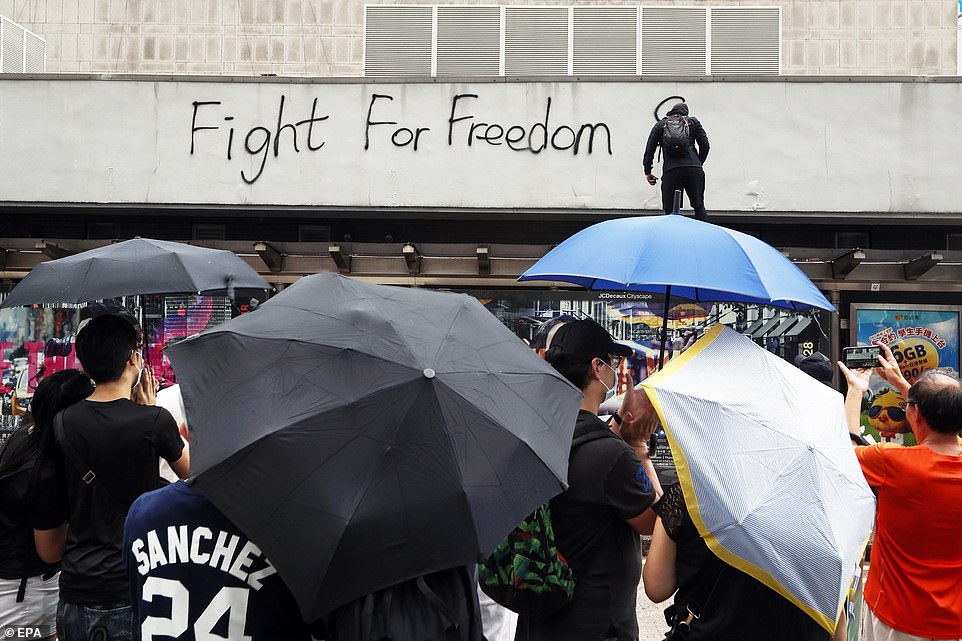 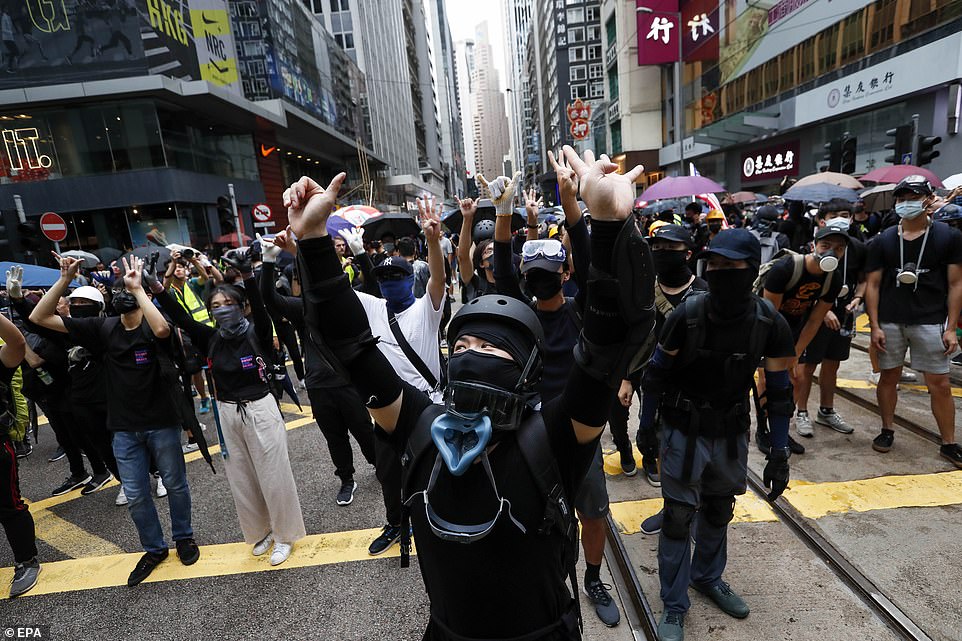 Police arrested a number of prominent pro-democracy activists and three lawmakers on Friday, seeking to rein in a movement which started with anger over planned legislation allowing extraditions to mainland China.

It soon broadened into calls for democracy amid fears China is squeezing Hong Kong’s freedoms.

But the latest protests have no leaders. The slogan is ‘be like water’, meaning be flexible. Marchers on Saturday were marching here and there, wherever streets took them, communicating with different hand signals and chanting ‘stand with Hong Kong’ and ‘fight for freedom’.

Some said roadblocks were forcing marchers to splinter.

China denies the charge of meddling in Hong Kong, which it says is an internal affair. It has denounced the protests and warned of the damage to the economy. 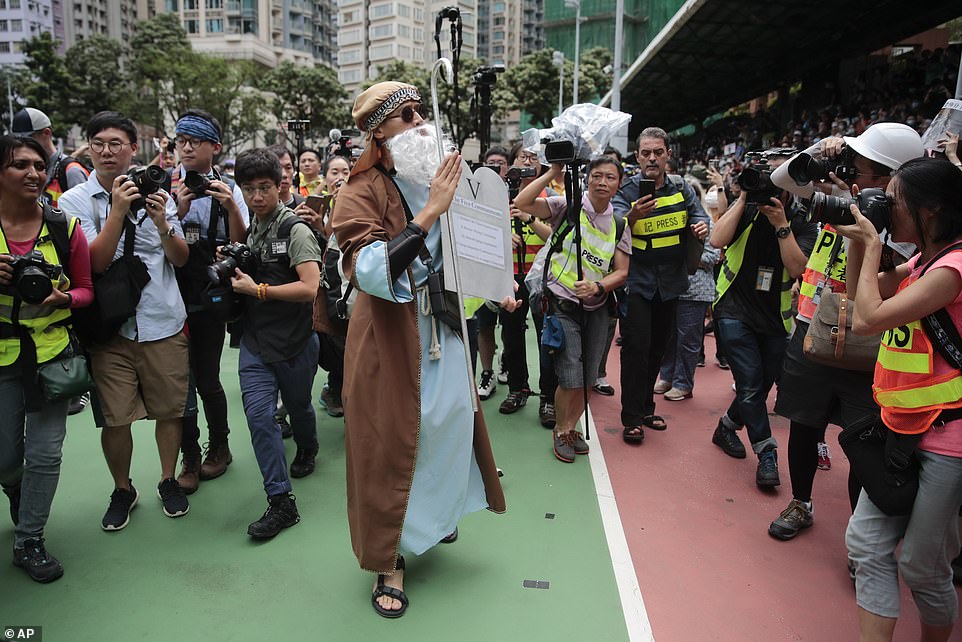 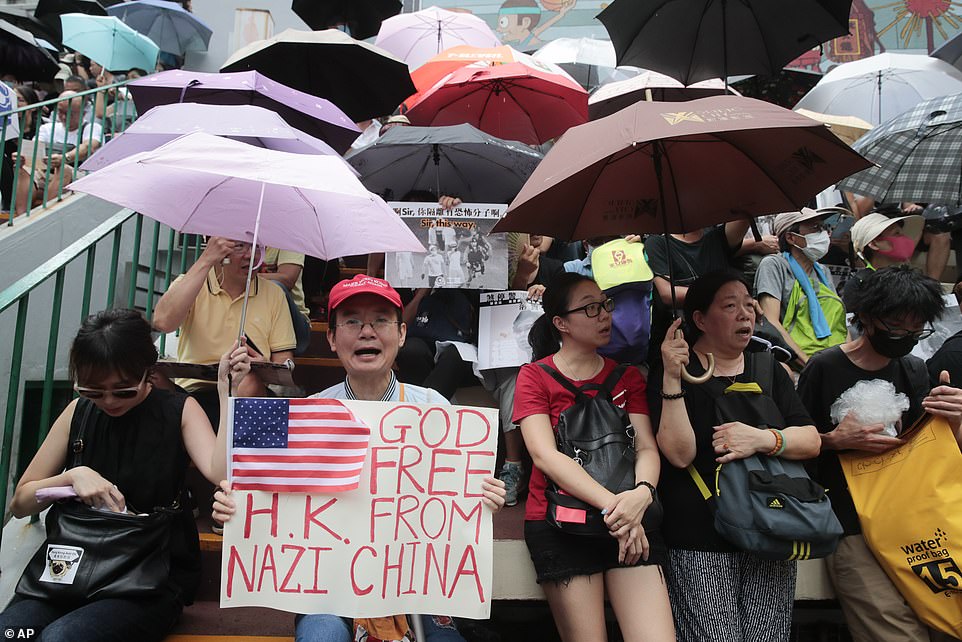 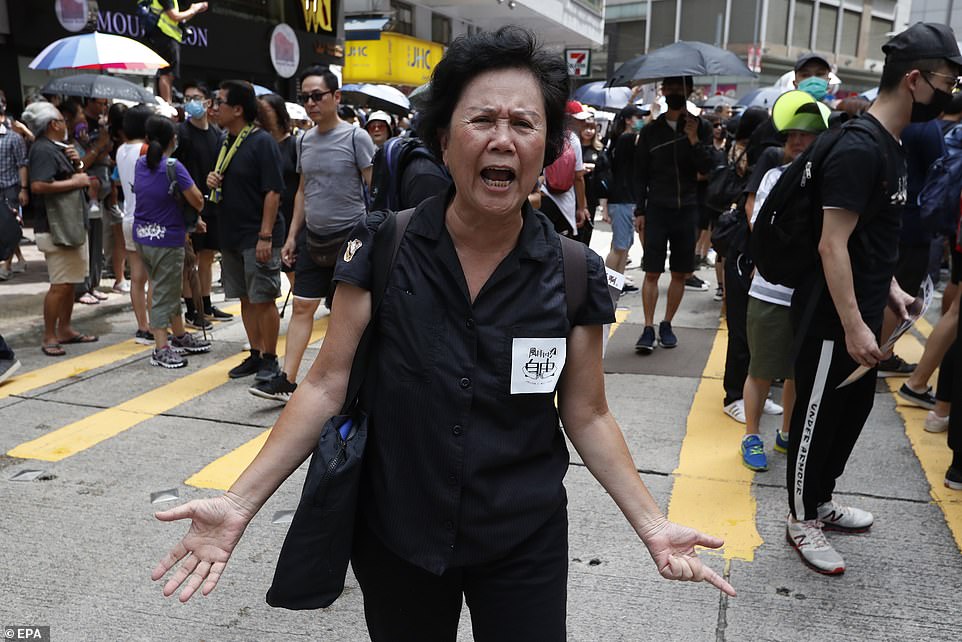 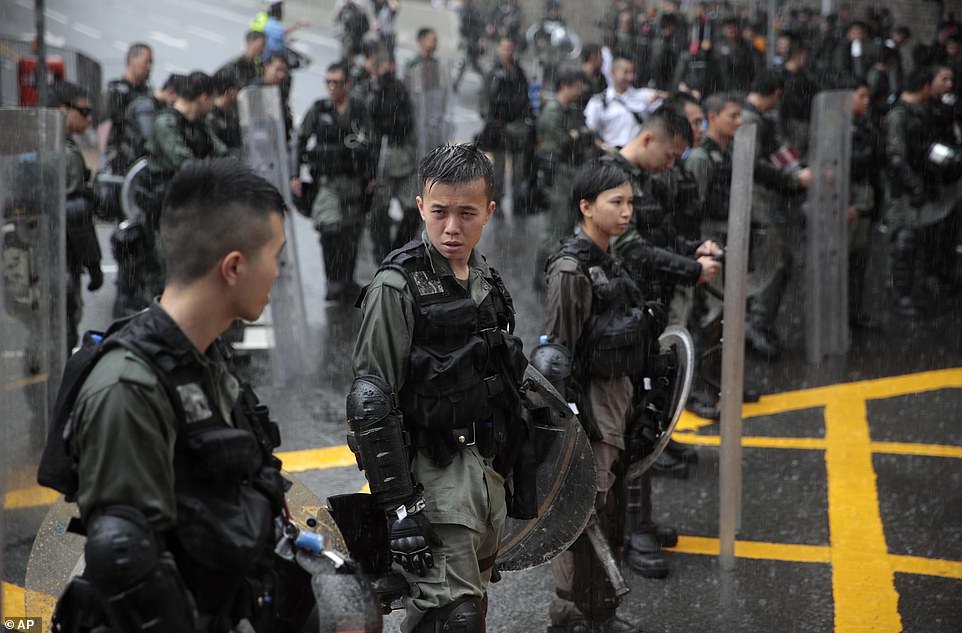 China is eager to quell the unrest before the 70th anniversary of the founding of the People’s Republic of China on October 1 but protesters vandalised a long red banner celebrating the event to cheers from the crowd.

Beijing has also accused foreign powers, particularly the United States and Britain, of fomenting the demonstrations and warned against foreign interference.

Hong Kong returned to China under a ‘one country, two systems’ formula that allows it to keep freedoms not enjoyed on the mainland, like the freedom to protest and an independent legal system.

There have been frequent clashes between protesters and police, who have often fired tear gas and rubber bullets to disperse crowds, amid accusations of excessive force.

‘A lot of people from the outside think it is the police who escalate (the violence) first,’ a police officer told a media briefing. ‘This is not true.’

An off-duty policeman was attacked late on Friday night by three unidentified men with a knife in the Kwai Chung container port area, suffering wounds to his limbs and back, police said. The news was a top-trending topic on China’s Twitter-like Weibo. 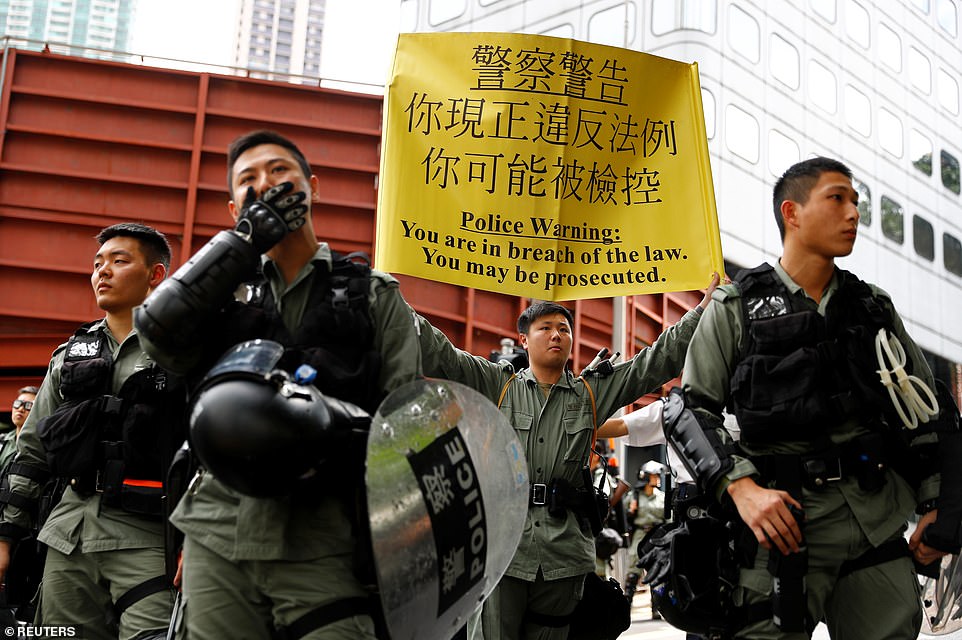 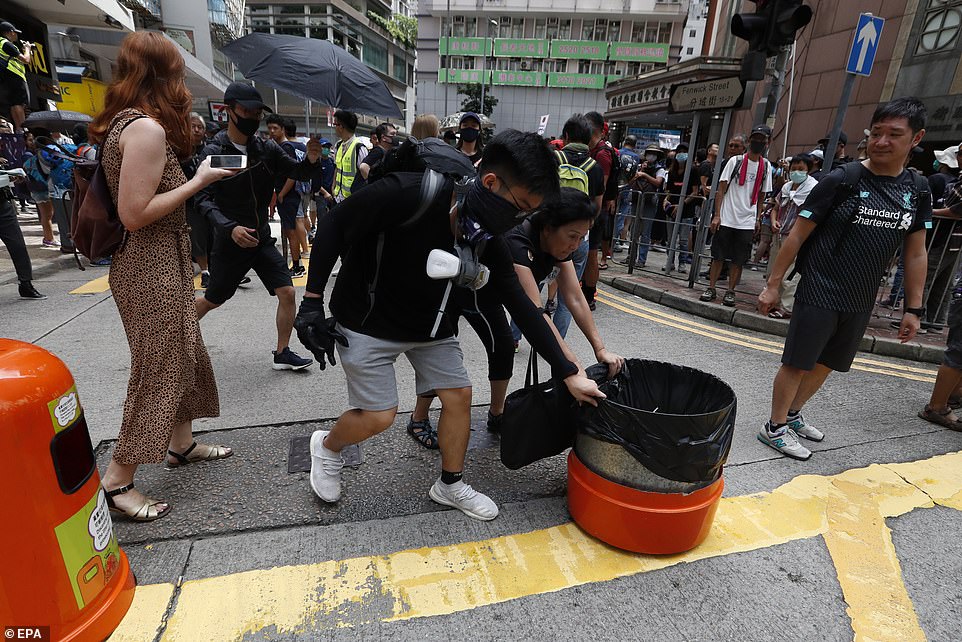 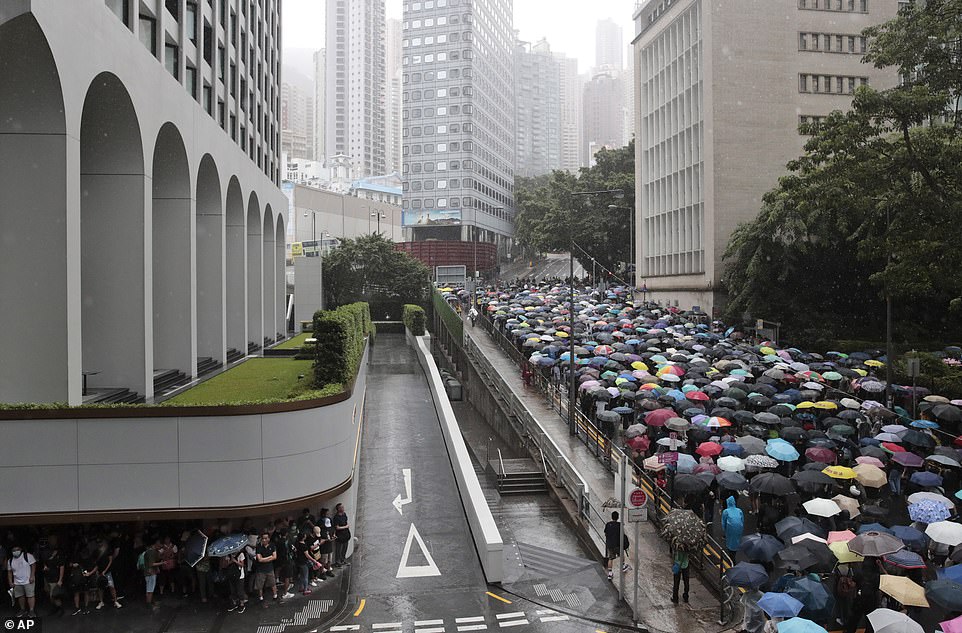 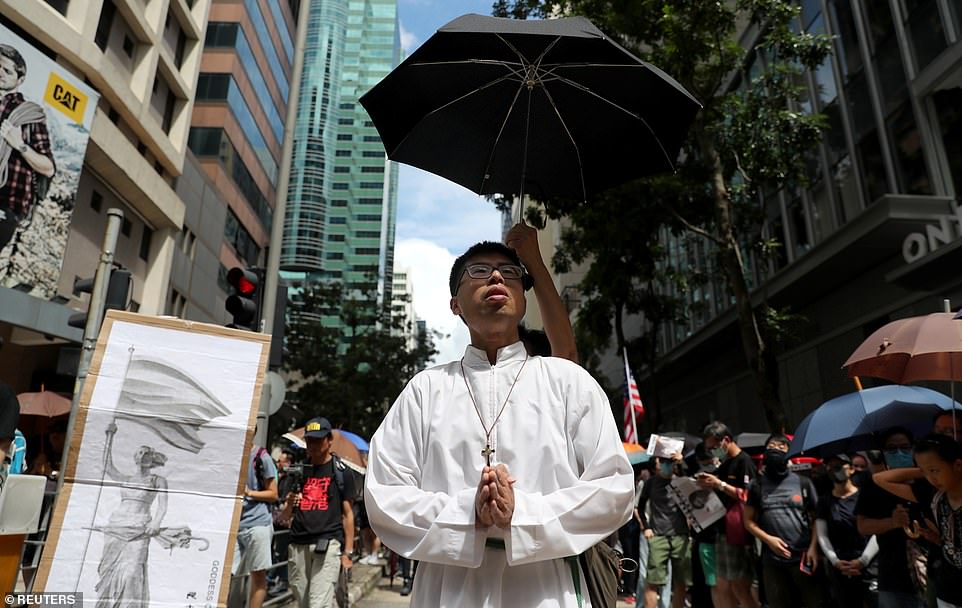 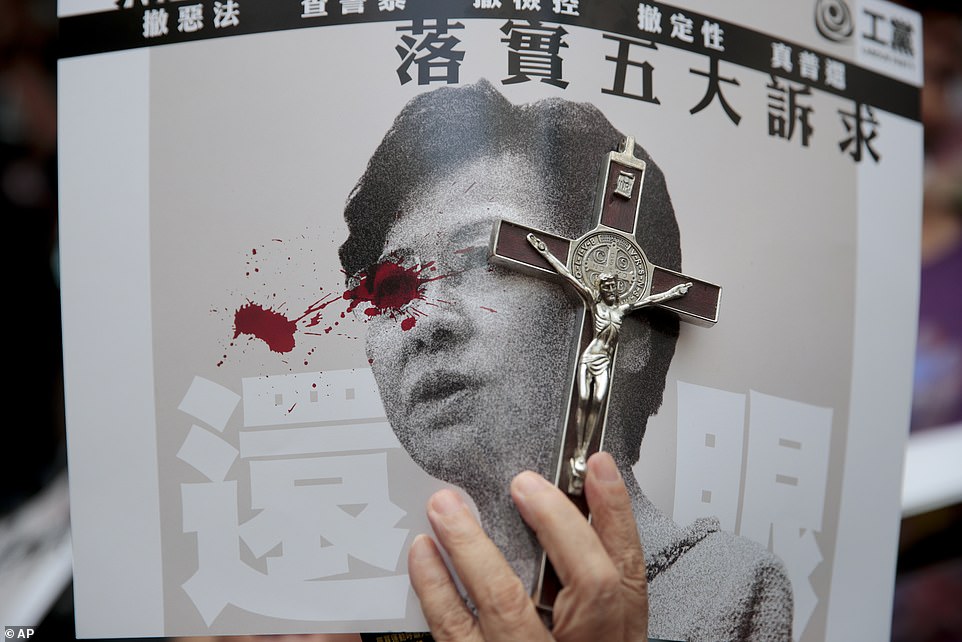 A protester holds a cross and poster which reads ‘Stop police disrupting Hong Kong, implement five demands’ during the rally on Saturday 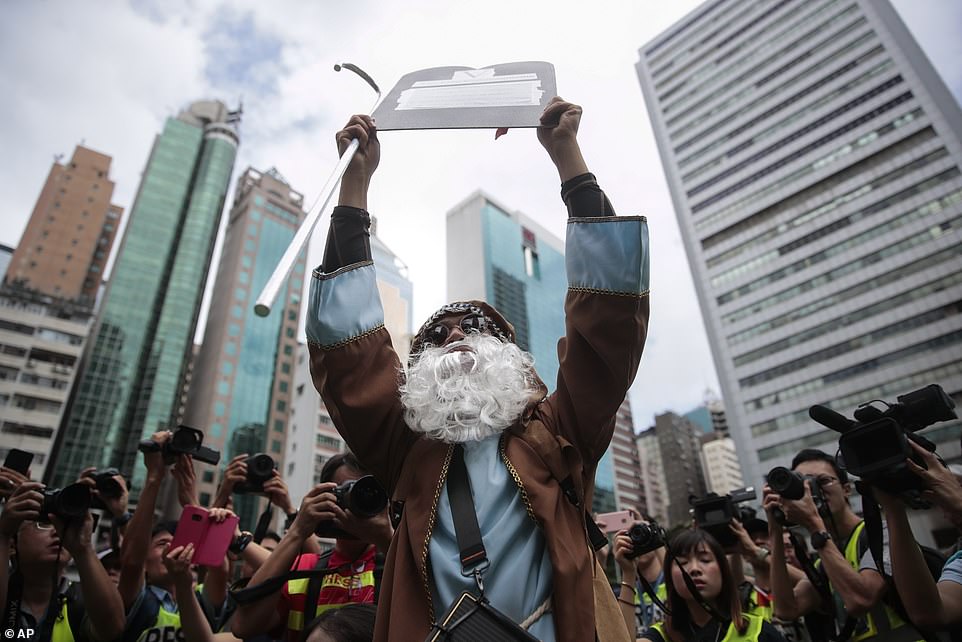 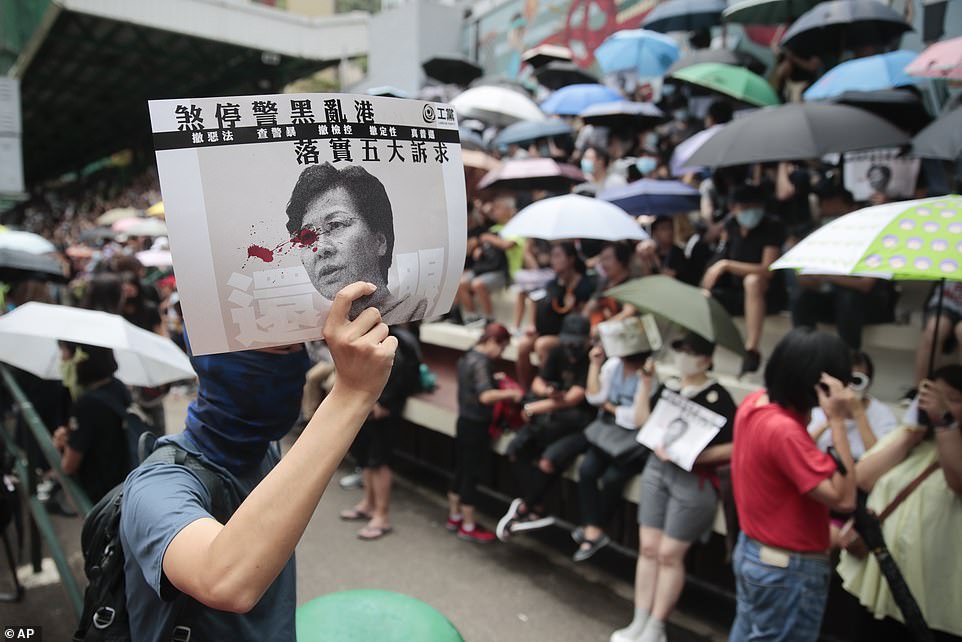 Many of the protesters unfurled their umbrellas once again, a symbol of the movement

With protesters and authorities locked in an impasse and Hong Kong facing its first recession in a decade, speculation has grown that the city government may impose emergency laws, giving it extra powers over detentions, censorship and curfews.

Lawmaker Fernando Cheung said the arrests of the three legislators were probably aimed at causing more anger and chaos to justify the use of emergency laws.

‘To incite more people to come out today is totally ridiculous,’ he told Reuters.

Saturday marks the fifth anniversary of a decision by China’s ruling Communist Party against fully democratic elections in Hong Kong.