‘Hoon’, 18, has Ford Falcon ute impounded after donuts ‘as dozens partied on a Gold Coast street’

Police dashcam shows them catch teenage ‘hoon’, 18, as he ‘does donuts’ on a Gold Coast street crowded with partygoers

A teenager allegedly caught doing burnouts surrounded by crowds of partying youths on the Gold Coast has had his bright green Ford Falcon ute impounded.

Shocking video of the stunt was captured by police who were called to the industrial suburb of Stapylton, about 11.30pm on Saturday night.

As police drove down Burnside Place, the footage shows large numbers of youths standing in groups blocking access to the road, looking at something ahead.

Wheels locked to the tow truck, the green ute was impounded the next day

In the distance a pair of headlights can be seen revolving in the middle of the road, as the smoke of burning rubber glows under the street lights, clouding the vision.

As the police sirens activate, a bright green ute can be seen skidding out of the smoke and driving off down the road through crowds of cheering youths.

Queensland police said on Sunday they had charged an 18-year-old man from Greenbank in Logan, 60km northwest of the Gold Coast, with hooning offenses.

‘On arrival, police observed a green Ford Falcon ute allegedly driving dangerously in the middle of the road and attempted to intercept it,’ police said in a release.

‘The ute allegedly sped off from police and was later located at a residence in Ormeau.’

A bright green ute can be seen skidding out of a donut and driving off about 11.30pm Saturday

Ormeau is 35km northwest of the Gold Coast, on the way to Logan.

The Greenbank man will face Beenleigh Magistrates Court on April 21 charged with dangerous driving and evasion.

Queenslanders have been urged to report hooning on Policelink 131 444 or the Hoon Hotline on 134 666. 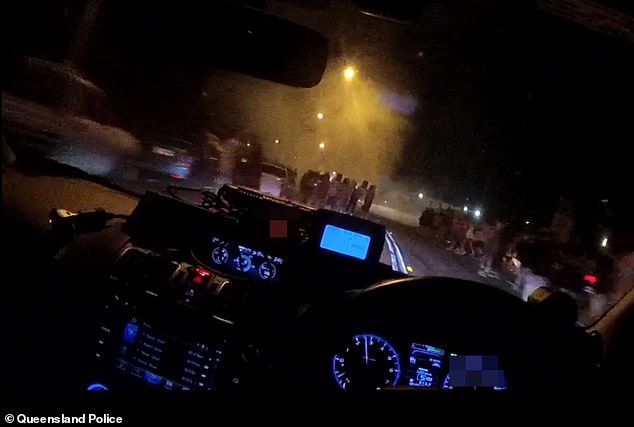 Smoke from burning rubber rises under the streetlights as police approach the crowds of youths watching the circle work at Stapylton, an industrial zone on the Gold Coast