People who have lost their sight in acid attacks may one day be able to see again thanks to a revolutionary new treatment.

An upcoming UK study will test the enzyme collagenase in 30 patients who have been in acid attacks or industrial accidents.

Applying collagenase to damaged corneas has been shown to soften the underlying tissue in rabbits.

This allowed the stem cells beneath the cornea to multiply and regenerate, which led to the injury repairing itself.

The pending study will be the first time the technique has been tested in real-life patients. Results are expected in 2021.

The study comes after a previous trial tested the enzyme collagenase in rabbits with damaged corneas. This helped to soften the tissue underneath, which allowed the stem cells to multiply and differentiate. A healthy rabbit cornea post-treatment is shown left and untreated right

The study will be carried out by Newcastle University and led by Dr Ricardo Gouveia, new harvest research fellow.

Study author Dr Che Connon, professor of tissue engineering, said: ‘The simplicity and relative low cost of this therapy compared to existing approaches in which stem cells have to be transplanted is a game-changer.

‘It greatly expands the number of potential patients being treated for corneal burns across the world and may well have applications in other diseases.’

Almost half-a-million people a year all over the world lose their sight due to chemical burns, including acid attacks.

And nearly five million people are completely blind as a result of corneal scars, which can occur due to burns, deep cuts or diseases.

WHAT IS A CORNEA TRANSPLANT?

A cornea transplant is an operation to remove all or part of someone’s cornea if it is damaged by injury or disease and replace it with donor tissue.

The cornea is a see-through layer at the front of the eye which protects the vital parts such as the iris and pupil.

The operation may also be called a keratoplasty or a corneal graft.

And it is commonly performed to help people who have a condition called keratoconus, which is when the cornea changes shape.

The procedure can be performed on an entire cornea or just on the outer layers, depending on how seriously damaged it is.

Patients can be kept awake during the surgery but given local anaesthetic in their eye, or completely sedated under general anaesthetic. The op takes about an hour to complete.

The cornea is the eye’s outermost layer and plays an important role in focusing vision.

It is covered by a thin barrier that somewhat protects against physical damage and prevents invading pathogens from entering the eye.

When this barrier is damaged, stem cells rapidly divide and flood the injured area, before sealing the wound.

Stem cells are basic cells with the ability to differentiate into more specialised cells.

This ‘flooding’ process can be compromised if the ‘stem cell niche’ – the area where the cells ‘live’ – is damaged.

Past research, carried out by the universities of Newcastle and Missouri, recreated the conditions of chemical burns on rabbits.

The animals’ injured stem cell niches were then treated with small doses of collagenase.

This then promoted healing via stem cell multiplication and renewal.

The difference was clear when the researchers examined the corneal tissue under high-resolution microscopes.

Speaking at the time, Dr Gouveia said: ‘We show the topical application of collagenase is safe and effective in restoring the normal stiffness of the cornea.

‘And [it] helps tissue regeneration by preventing the differentiation and loss of adult stem cells after such injuries.

‘We were further surprised to discover that the ability for a wound to heal was not directly caused by a lack of stem cells, but instead due to the environment these cells are exposed to.’ 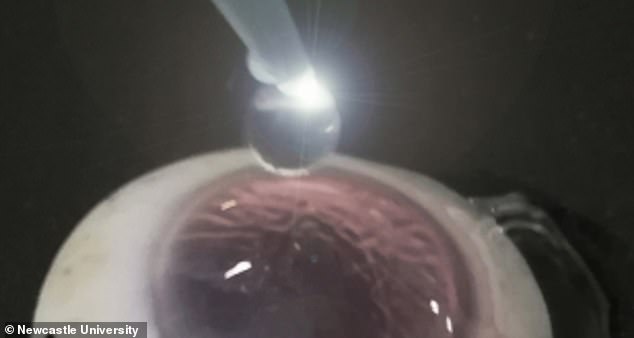 Collagenase has already been approved for other conditions, which accelerated its testing in clinical trials both in Europe and the US.

The enzyme is used as a non-surgical therapy for dupuytren’s contracture, which occurs when one or more fingers bend towards the palm.

‘As a scientist it is exceptionally rewarding to be involved in a bench-to-bedside project, using a scientific discovery to create a new treatment that benefits patients and helps improve lives,’ Dr Gouveia said.

The upcoming study will be funded by the Ulverscroft Foundation, which supports visually-impaired people.

Participants will be recruited from the LV Prasad Eye Institute in India.

In the future, the researchers hope their studies could benefit cancer patients, with tumour stiffness being a marker of disease progression.