President Trump gave Hope Hicks a loving goodbye on Thursday morning, but it looked like he wanted to give his outgoing White House communications director one final kiss before she bid farewell.

During the emotional sendoff, Trump, 71, proudly pointed at Hicks, 29, before shaking her hand and giving her a peck on the cheek. When they pulled away, the president waved to the photographers and videographers stationed on the South Lawn before offering the longtime aide another energetic handshake.

This time, Trump put his arm on her shoulder and appeared to be leaning in for a second kiss, but Hicks was too fast and had already pulled away.

Hopeless! President Trump appeared to try and give Hope Hicks a second goodbye kiss on Thursday, but she had turned away while still holding his hand 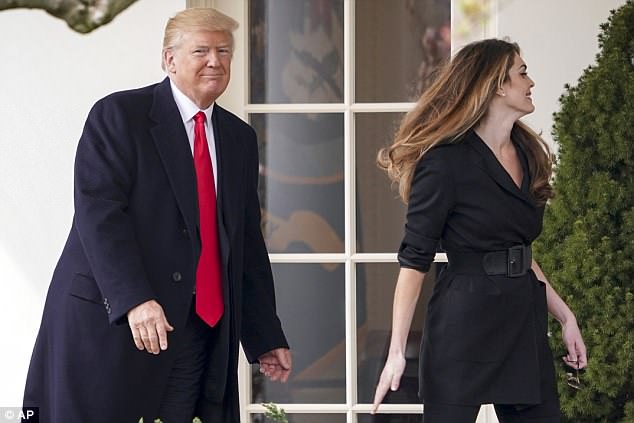 There she goes: Trump flashed a tight, closed-mouth smile to the media while outgoing White House communications director headed off

The former model was still holding her former boss’ hand when she turned and made her way back inside.

Trump flashed a tight, closed-mouth smile to the media after Hicks turned away, and they both head off in separate directions.

Hicks got her start in public relations and worked with Trump’s daughter Ivanka on her eponymous fashion line. Ivanka eventually hired her to join the company full time.

While she was working for Ivanka, Trump called Hicks into his office in Trump Tower in January 2015 and told her she was joining his presidential campaign.

Hicks became one of Trump’s closest aides, accompanying him on the road throughout his grueling presidential campaign in 2016 before moving into an office at the White House following his inauguration. 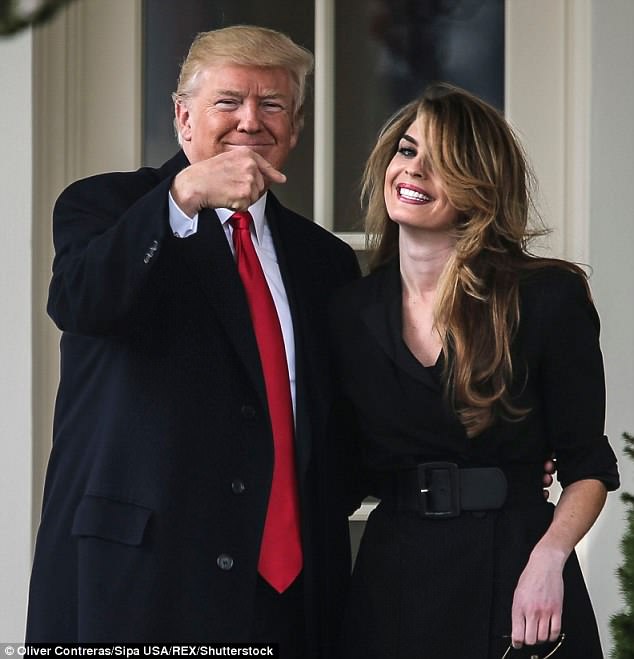 Look at this: Trump energetically pointed at Hicks and had his arm wrapped around her waist during his emotional sendoff 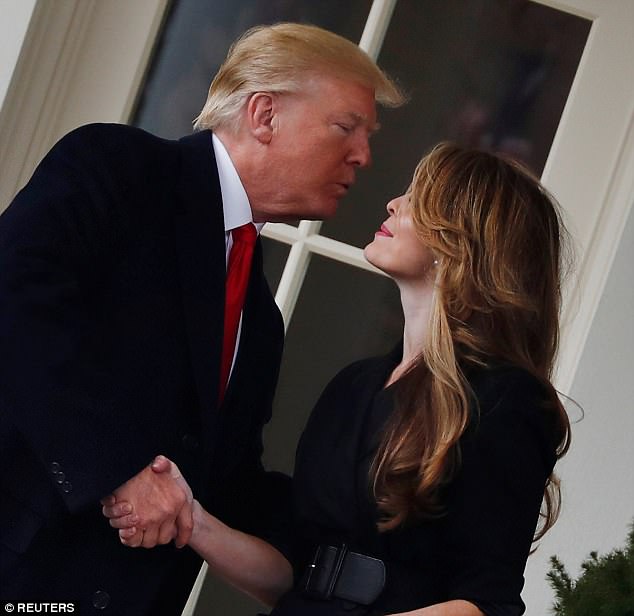 Pucker up: The president pulled Hicks in for a kiss after shaking her hand 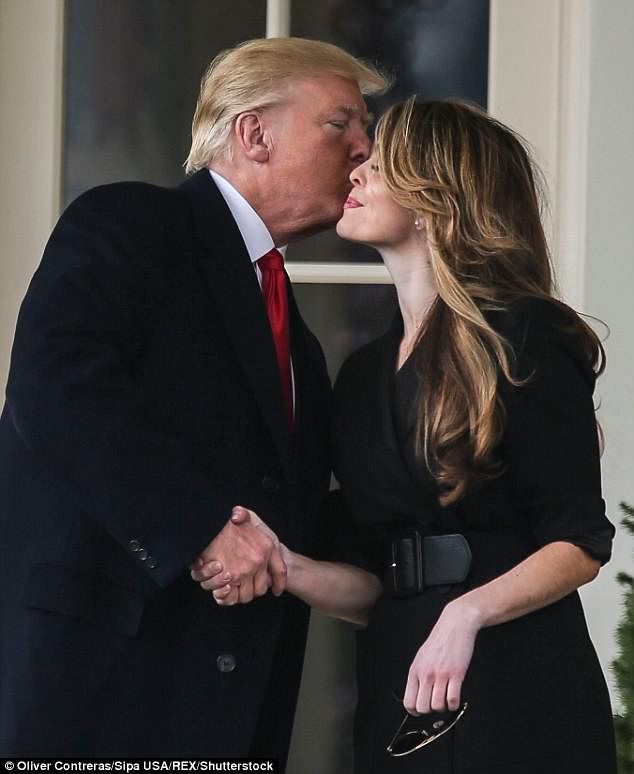 Father figure: Trump thinks of Hicks like a daughter, and he held on to her hand while giving her a peck on the cheek 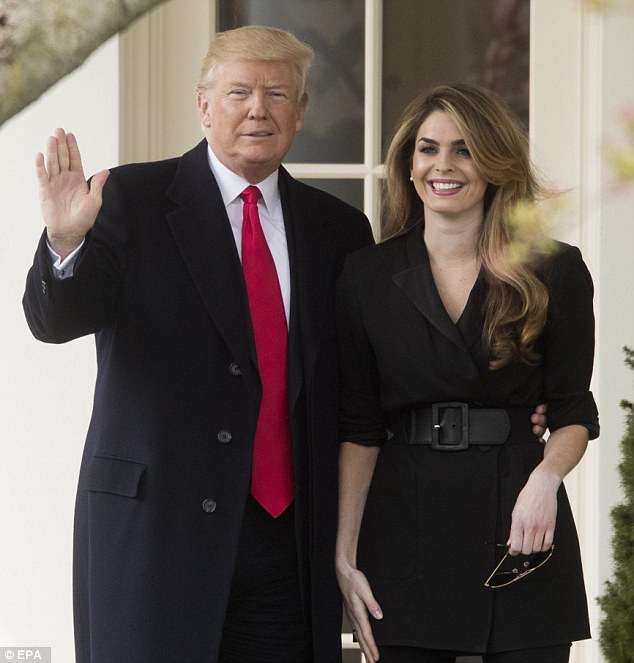 Did she? Some Twitter users pointed out that Hicks wiped her hand on her blazer after shaking hands with the president

After Mike Dubke, Sean Spicer and Anthony Scaramucci put in a total of 192 days heading up Trump’s spin efforts, the president picked Hicks to be the youngest ever to hold the post of White House director of communications.

She lasted four days longer than all of her predecessors combined.

Trump is said to think of Hicks like a daughter, but some were perplexed as to why he would kiss her goodbye.

When footage of the awkward encounter made its way to Twitter, some commenters insisted that it was in appropriate for the president to kiss her in the first place.

‘How weird to KISS her. Skeevy,’ Camille Cormier wrote, while Susan Parrish added that its ‘inappropriate for a boss to kiss [an] employee.’

‘Skeevy’: When footage of the goodbye made its way to Twitter, some commenters pointed out that it was inappropriate for the president to kiss her

Just saying: Susan Parrish was among those who noted that it was wrong for a boss to kiss an employee

Accusations: One eagle-eyed Twitter user pointed out that Hicks wiped her hand after shaking hands with the president

She saw it too: Another person agreed, noting that Hicks wiped her hand on her blazer immediately after the handshake 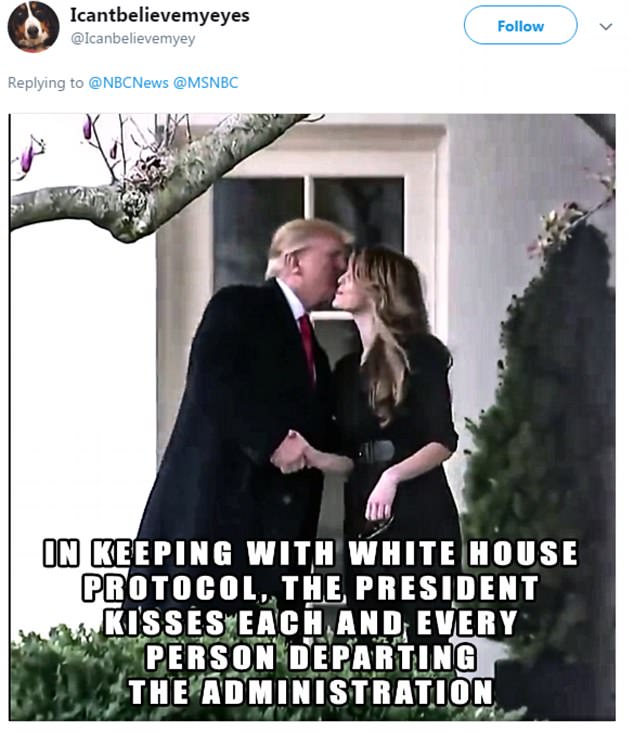 Going viral: Someone else used a picture of the kiss to make a meme

‘Really does he kiss other staff or is it just the women. How professional is that?’ someone else asked.

Several other people pointed out that Hicks wiped her hand on her blazer after shaking the president’s hand.

Hicks donned a mournful all-black outfit for her public farewell, pairing a long black blazer with an oversize black belt to cinch her waist. She topped off the look with a pair of form-fitting black dress pants.

Hicks’ last official day at the complex is Friday, although she could turn in her badge and leave for good today, a Trump spokesperson said.

The soon-to-be former staffer looked ready to go on Thursday with a pair of sunglasses in one hand as she said goodbye to the president. 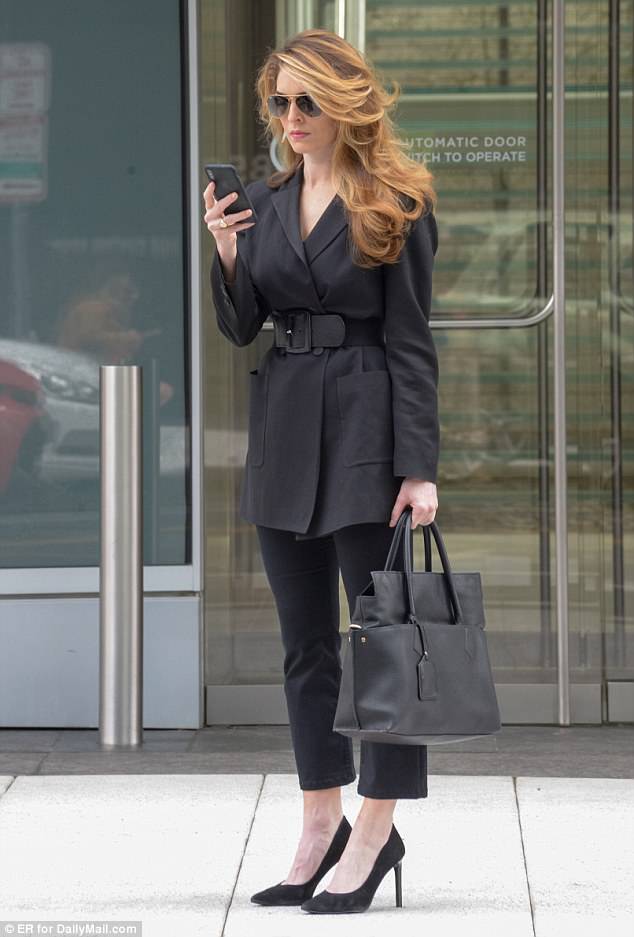 Late start: While on her way to the office, Hicks was photographed standing outside of her Washington, D.C. apartment on Thursday morning just before 10 a.m. 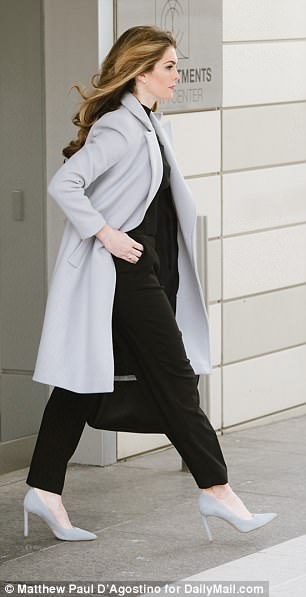 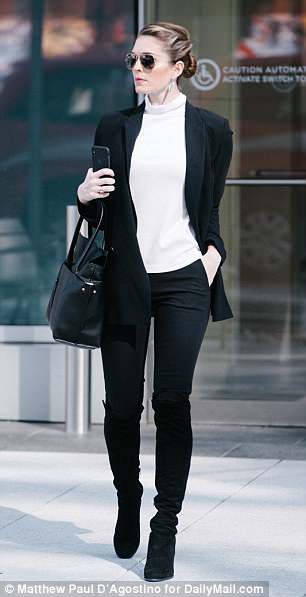 Up in the hair: The outgoing White House communications director announced she was leaving her post on February 28  (pictured on March 27 on left, March 22 on right) 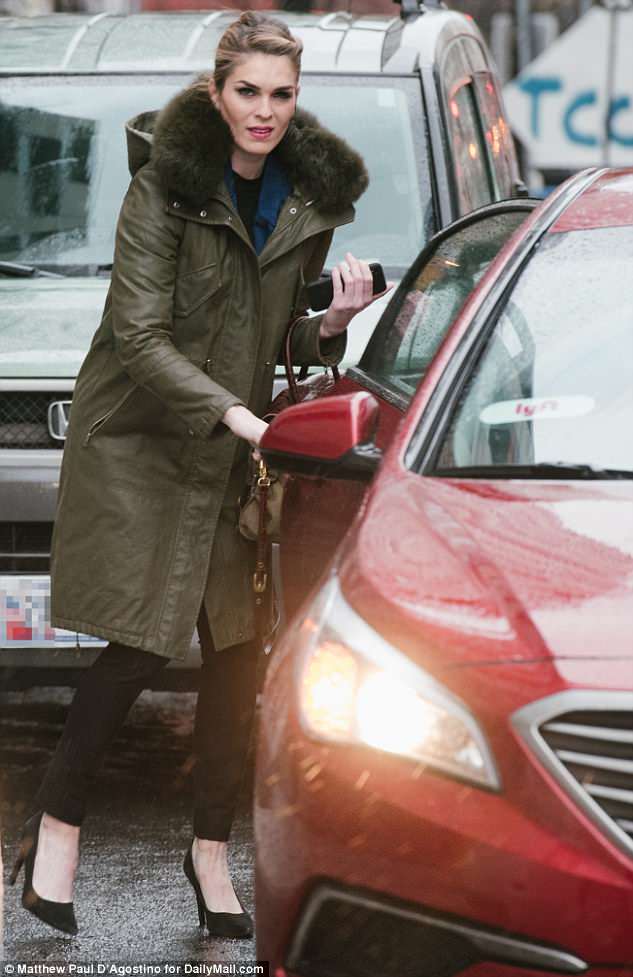 Thanks for the memories: The news was confirmed by a White House official who offered no further comment (March 20 above) 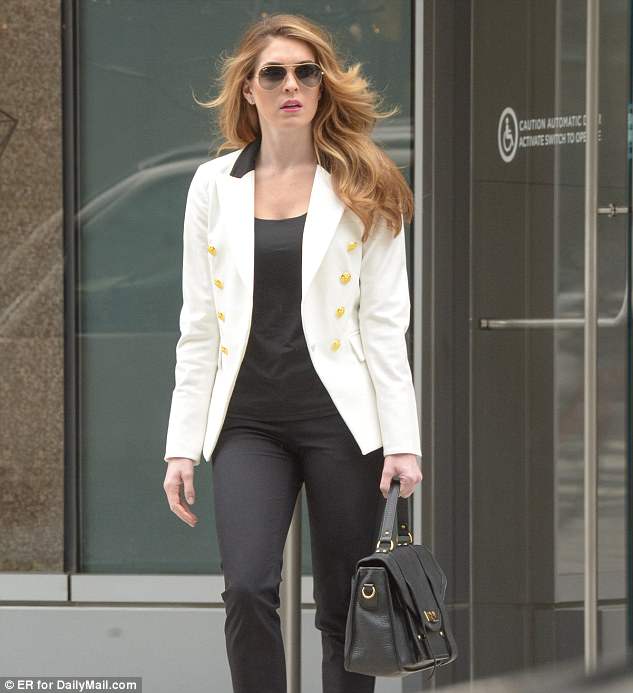 XOXO, Gossip Girl: ‘Most importantly, the president has deep respected for her, cares about her greatly, and listens to her. That’s not true of everyone. She’s earned that,’ Ivanka Trump said of of Hicks (above on March 1)

Pleasure principal: She is now the fourth person to exit as WH Communications Director after Michael Dubke, Sean Spicer and Anthony Scaramucci

Trump headed to Ohio for a speech on infrastructure before flying to Mar-A-Lago for the Easter holiday. This was the last day in the near term that they would be on the property together.

Hicks resigned last month after an especially grueling day on Capitol Hill, where lawmakers grilled her on the Trump campaign’s contacts with the Kremlin.

She’d also struggled with the revelation that her then-boyfriend Rob Porter, the former White House staff secretary, had allegedly beat both of his ex-wives. They told their stories to DailyMail.com and the FBI.

Hicks has worked for Trump since before he became president, moving over from his presidential campaign to handle press operations in 2015.

At the White House, she was among his inner circle of aides, taking on the role of communications director after his last one, Anthony Scaramucci, fizzled out 11 days into the role.