Women have long been advised to take folic acid ahead of pregnancy but should prospective fathers do the same?

New research suggests that men with higher levels of the vitamin have healthier babies.

The study’s U.S. and Spanish authors said their finding was ‘of great importance’ and could lead to men, as well as women, being advised to improve their diet ahead of trying to start a family.

Women have long been advised to take folic acid ahead of pregnancy but should prospective fathers do the same?

Folic acid is a synthetic version of folate or vitamin B9, and helps make healthy red blood cells.

Good sources include green leafy vegetables such as spinach and cabbage, as well as Brussels sprouts, orange juice, peas and liver. Some cereals and margarine spreads are also fortified with the vitamin.

Folic acid is also key to the growth of new cells and to the manufacture of the DNA that’s at their core.

This means demand for it is particularly high in pregnancy, when new cells are constantly forming.

In 1991, a landmark British study found taking folic acid supplements before pregnancy cuts the risk of spina bifida, in which a baby’s spinal cord does not develop properly in the first few weeks of pregnancy, which can lead to paralysis, incontinence and learning difficulties, by 72 per cent.

Since 1992, women have been advised to take supplements before pregnancy.

The NHS recommends taking 400 mcg a day from before conception until the 12th week of pregnancy.

Starting supplementation early builds up a woman’s stores and ensures her unborn baby is protected — even if she doesn’t realise she is pregnant — until the critical period for spine development in the first few weeks. 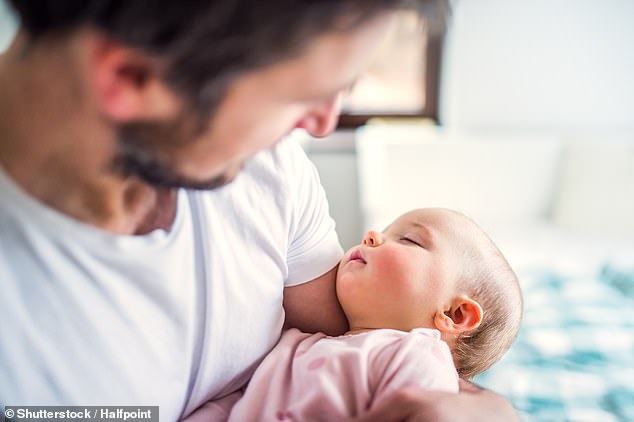 New research suggests that men with higher levels of the vitamin have healthier babies. Folic acid is a synthetic version of folate or vitamin B9, and helps make healthy red blood cells

However, not all women follow the advice and around 1,000 babies with spina bifida and related birth defects are conceived a year in the UK.

In June, the Government launched a consultation on adding folic acid to flour to boost intake.

But what about men? Do they need to raise their folic acid intake ahead of pregnancy too?

A handful of studies have looked at the impact of folic acid on males, and while it’s still early days, the results suggest that a lack of folic acid can make subtle changes to the DNA in a man’s sperm and that these can have lasting consequences for his unborn baby.

A U.S. study from 2008 found men with the most folate in their diets had the highest quality sperm.

The greater their intake of the vitamin, the fewer sperm they had with genetic changes that can lead to Down’s syndrome and miscarriages.

Other research, from 2013, found that mice born to fathers low in folate were 30 per cent more likely to have birth defects than those whose fathers were not deficient, the journal Nature Communications reported.

‘Because men have their fertility throughout their lives, they think they are good to go at any time,’ said the Canadian researchers. ‘But both men and women need to think about what they are doing pre-conception.’

In the latest study, researchers from Harvard Medical School in the U.S. and Navarra University in Spain, asked 108 couples undergoing IVF treatment about their diets in the past year and any supplements they had taken.

Some 142 babies were born, including several sets of twins and triplets.

Analysis of the couples’ diets found that a woman’s folate levels did not affect the length of her pregnancy.

But in men, higher levels — from food or supplements — were linked to the baby spending longer in the womb.

An extra 400mcg a day of the vitamin — the amount found in a typical supplement — equated to 2.6 days’ longer gestation, reports the journal Reproductive BioMedicine Online.

Lead researcher Dr Jorge Chavarro, an associate professor of nutrition and epidemiology, adds: ‘Our results suggest that preconception exposures of the father may have an impact on the health of his offspring and, therefore, that pre-conception care should shift from a woman-centric to couple-based approach.’

Professor Charles Kingsland, medical director of the CARE chain of IVF clinics, told Good Health another two or three days in the womb could be ‘significant’ for premature babies, with the lung and brain development both benefiting from the extra time.

‘In premature babies, those additional days could be vital,’ he says.

Sheena Lewis, a male fertility expert and emeritus professor at Queen’s University Belfast cautions against supplementation, pointing out that another recent study linked high levels of folate in men to smaller babies.

She says prospective fathers can get all the folate they need from green leafy vegetables.

But Professor Kingsland says there is ‘no harm’ in would-be-fathers who have a poor diet taking supplements.

‘Nicotine breaks down folate in the body,’ he says, ‘so there’s even more reason for smokers to take folic acid supplements ahead of starting a family.’