Horrific injuries of cyclist, 82, who was left for dead by hit-and-run white van driver

These are the ghastly injuries suffered by an 82-year-old cyclist who landed face-first after being flung from his handlebars in a hit-and-run.

David Bennett was left battered and bruised when he was knocked off his bike by the driver of a white van.

The grandfather-of-three was rushed to hospital where he was given a brain scan after hitting his head on the road.

Despite escaping major injury, furious David claims he could have been killed following the daytime smash on Saturday in Layton, Lancashire.

The retired BAE engineer, who has been cycling for seven decades, was travelling at around 10mph when he was clipped by the van which had pulled out of a road on the left.

The Blackpool Victoria Hospital volunteer was flung over the handlebars, but the van driver bolted and left him lying in the road writhing in pain.

Hero bystanders came to his aid, wrapping him in blankets before he was rushed to Blackpool Victoria Hospital for treatment.

Mr Bennett said: ‘I assumed the driver would be breaking but they didn’t slow and I didn’t have much time to think. My bike was hit at the back and I ended up on the road, hitting my head. 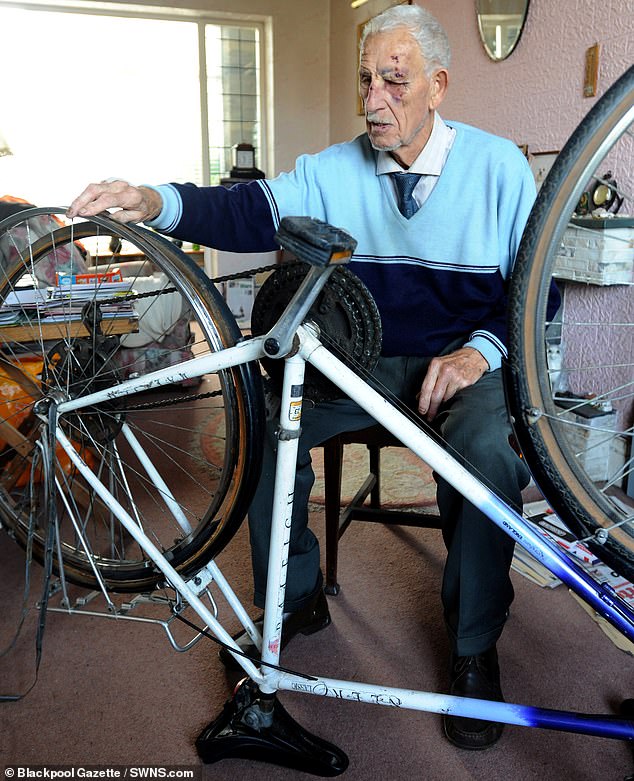 The 82-year-old’s bicycle (pictured) was also damaged in the accident, which left him battered and bruised

‘I was dazed, lying on the road. It could have been a lot worse. I could have easily been killed and am very lucky.

‘Two people picked me up under my arms and took me to the side of the road. I don’t want the driver to get away with it. They’re a menace on the road.

Mr Bennett had been to Layton Library for help with his computer tablet as well visiting nearby shops, including the Co-op and Costcutter stores. 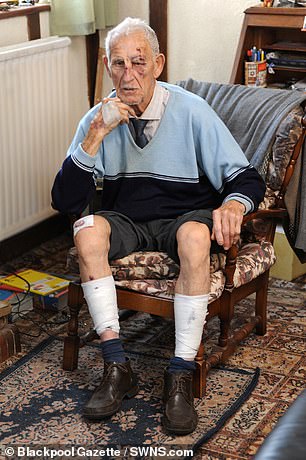 Mr Bennett (pictured) says he could have died in the accident

He began cycling home when he said the white van pulled out of the first road on the left – Wilford Street – and clipped the back of his bike.

David looked up to see the van driving off, as residents who heard the bang went to his aid.

Witness Emma Beardall said: ‘Some people from the houses on the road came out to help, and we stood and waited for the emergency services to come.

‘When they arrived, we took Mr Bennett’s bike to his house and left it with his neighbour as he asked us to.’

Mr Bennett, who worked for BAE for 31 years, cycles every day despite owning a decade-old car which has yet to clock 7,000 miles.

He said: ‘I’m 82 and the medics say it’s the best thing to do. It’s only because I cycle I’m fit enough to recover from something like this.’

David is now recovering at home from his ordeal and is trying to fix his buckled bike.

His face is bruised and cut, he has a plaster on his scraped hands and a bandage on each leg. 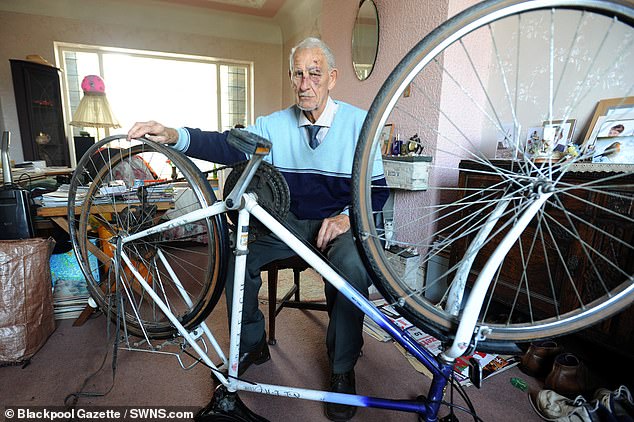 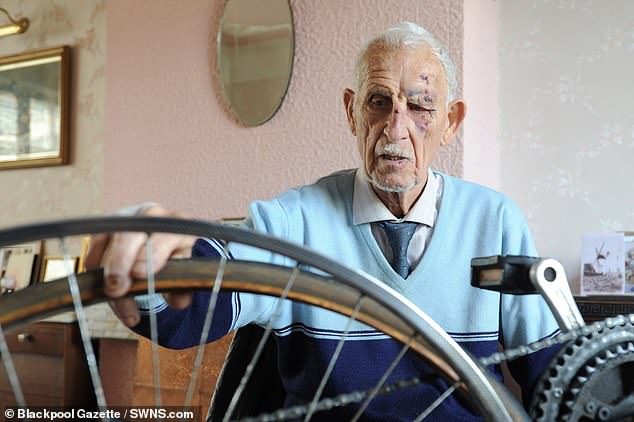 The retired engineer is a passionate cyclist and has used bicycles since he was 12 years old, but he was left writhing in agony on the floor

Mr Bennett, who has been cycling since he was 12, has been involved in three serious crashes in seven decades.

When he was 16, he would cycle to Lancaster on a Sunday, and was injured at Cockerham Sands when somebody opened their car door.

Then, two years ago, David was hurt when a car overtook him and turned left – leaving him “no room” to brake.

Lancashire Police said officers were looking at CCTV footage to try and trace Saturday’s van driver and appealed for witnesses or those with dashcam footage to come forward.

Anyone with information should call 101, quoting reference 595 of Saturday, September 22.