Taxi pulls out in front of a police car injuring three officers as they raced to an emergency – so was he entirely to blame?

A trio of police officers have been rushed to hospital after a horror crash with a taxi driver who pulled out in front of them.

The cabbie had just completed a job in Sydney’s west on Sunday morning when he cautiously pulled out of a side street and on to St Marys’ generally busy Glossop Street.

But only seconds after drifting into the right lane, a Toyota Camry police car with its lights and sirens blaring collided with the unaware driver behind the wheel of another Toyota Camry, sending debris sprawling across the road.

A trio of police officers have been left injured after a taxi pulled out in front of them, wrecking their Toyota Camry (pictured)

The officers were rushing to attend to a job marked as ‘urgent’ when they hit the taxi driver.

The force of the collision pushed the taxi more than 50metres down the road, with nearby workers running to help after hearing the boom.

Rushing to help, the locals found twisted panels of metal along the median strip of the road, with the front left of the police car a mangled wreck.

The officers in the car were taken to hospital with minor injuries, one complaining of chest pains, with the taxi driver left in shock. 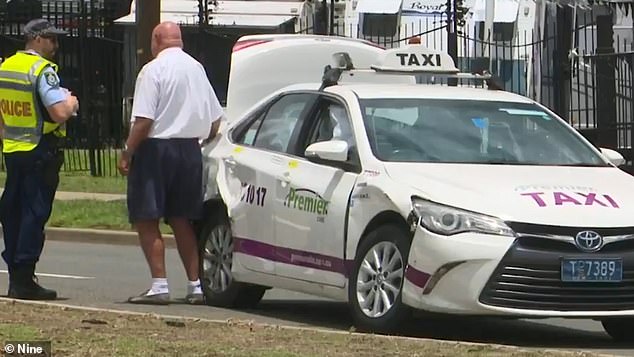 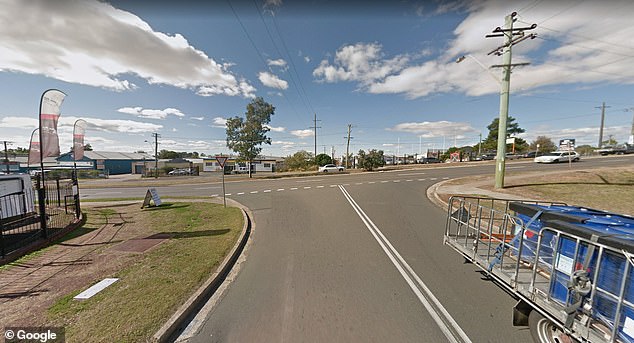 The police car sped over a crest (right), a blind-spot for the taxi driver pulling onto the road

The officers’ actions are being investigated, and the speed at which they were travelling will be reviewed with scrutiny.

The cabbie had pulled out in front of them slowly, and could never have seen the car coming as it sped over a crest.

It is believed the police had been deployed to respond to calls of a violent domestic abuse call, and were told to get there ‘urgently’.