Horrific moment cop is thrown into the air after his motorbike slams into car – but who’s to blame?

This is the shocking moment a policeman was thrown from his motorbike after colliding with an oncoming car – and it’s left people divided over who’s to blame.

The incident happened on Wednesday 22 August just after 5.30pm in Adelaide and was caught on a fellow driver’s dash cam in Adelaide.

The footage was posted on the Dash Cam Owners Australia Facebook page and shows the officer riding down the road towards a traffic light crossing.

The lights are green and the cop is seen driving down the inside lane when a car coming the other way begins to make a right turn.

The motorbike and car smash into each other, sending the cop flying into the air before he lands on the ground in a heap.

Some viewers have placed the blame entirely on the policeman, saying that he clearly ‘wasn’t fully paying attention’.

‘That copper was approaching the intersection like he’s riding on a motorway. No sense of awareness at all,’ one person wrote.

‘Even with his lights on, that cop did make a bad decision to be speeding through the intersection on the hard left,’ wrote another.

But these comments sparked outrage with others who believe there is no question that the car driver is to blame.

‘How can people blame the police officer?’ one viewer asked.

‘The light was green and the white car failed to give way as you see the other two cars had to break heavily to avoid hitting them also.’

A number of fellow motorcyclists also added their thoughts, with most saying that although the car definitely in the wrong, the cop was driving too fast.

‘100% car at fault, however as a motorcyclist myself that was the silliest thing for that officer to do,’ one wrote. 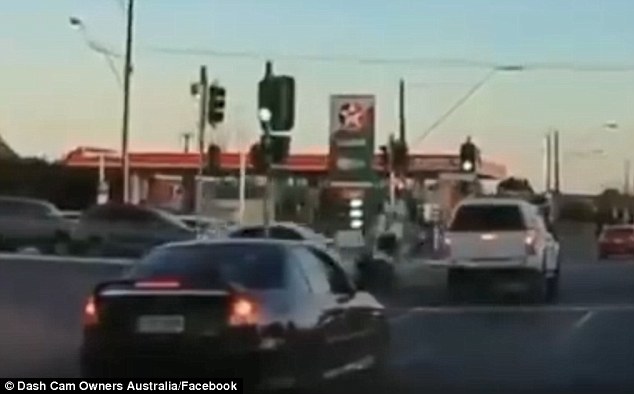 Another said: ‘Yeah the car was at fault no doubt, but as a rider myself, going that fast down an inside lane is asking for trouble.’

The accident took place at the intersection of Marion Road and Cross Road in South Plympton, Adelaide.

‘The rider of the bike, a male officer, was taken to hospital with non-life-threatening injuries,’ a police statement said.

‘The driver of the car, a 21-year-old woman from Clarence Park, was not injured.’ 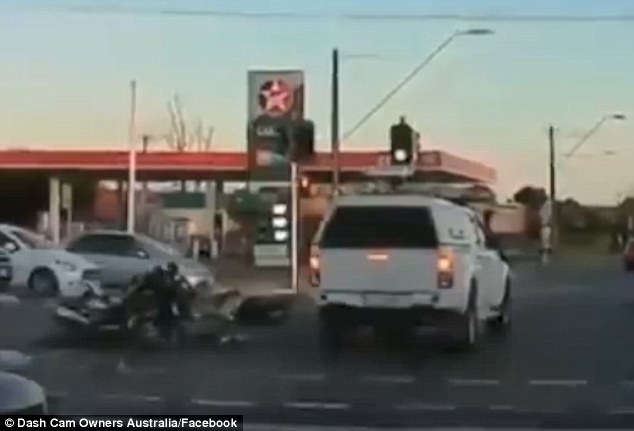 Other motorcyclists said the car is 100% to blame, but that the cop was ‘asking for trouble’