A 6ft carpet python wraps its mouth around an entire bird while dangling from a Queensland family’s washing line in this horrifying video.

The suspended serpent is focused on extending its jaw so that it can eat its meal whole and takes no notice of the snake catcher filming it.

It dangles below a bird feeder above the washing line that was an easy target.

The carpet python was discovered by a family at their home in Buderim, Queensland.

The 6ft carpet python hangs from a washing line while wrapping its jaws around an entire corella bird at a home in Buderim, Queensland

Stuart McKenzie from Sunshine Coast Snake Catchers recorded the footage after being called out to deal with the python.

The snake catcher warned that bird feeders are common targets for snakes.

He said: ‘This is definitely a warning to anyone who feeds wild birds in their yard.

‘Please be aware that you may also cause snakes to come in after the birds and also encourage rats because of all the leftover seed.

‘This Carpet Python was hanging out on the family’s clothesline which acted as a bird feeder.

‘It was only a matter of time until it got himself a nice feed of bird! 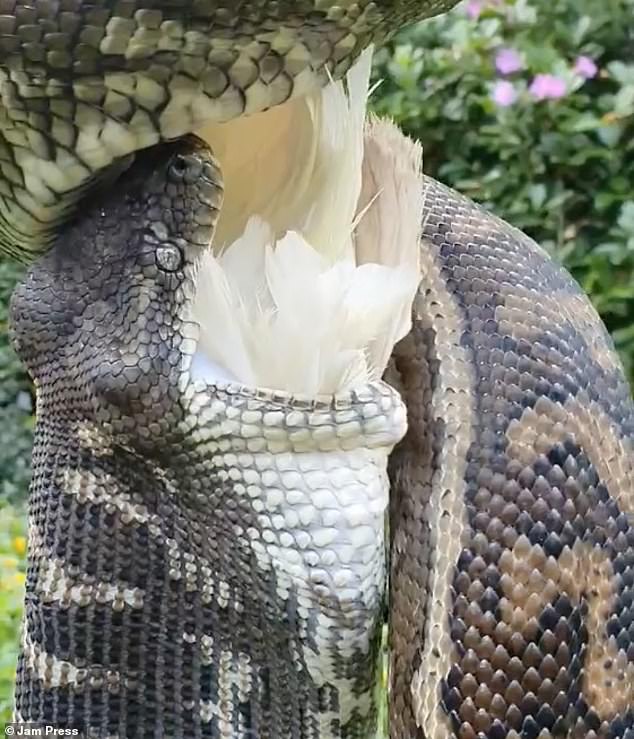 The snake edges its mouth around the body of the bird and uses its body the streamline its meal. Stuart McKenzie from Sunshine Coast Snake Catchers filmed the snakeafter being called out to deal with it

‘This happened at a home today.’

Carpet pythons are able to open their jaws up to five times the size of its head in order to swallow its prey.

Stuart was able to get up close with the carpet python because it was busy eating.

The pythons are not always so comfortable though and on May 6, McKenzie shared a video of a python lunging at him.

The clip from four years ago shows the longest carpet python that McKenzie has ever seen.

While trying film the enormous snake, it lunged at him.

McKenzie said the snake was angry ‘as soon as I went near him’.