A horrified mother found her home in ruins after her 15-year-old daughter’s secret party descended into chaos when 100 youths collapsed a ceiling, smashed a TV and destroyed her bed.

Officers in a dozen squad cars arrived at the usually sleepy cul-de-sac in Lincoln on Saturday night where they were pelted with glass bottles, according to witnesses.

The gathering, which was advertised on Facebook and began at around 4pm, also saw revellers taking Class A drugs in a bath.

Officers in a dozen squad cars arrived on the road in Lincoln, on Saturday night, where they were pelted with glass bottles, according to witnesses 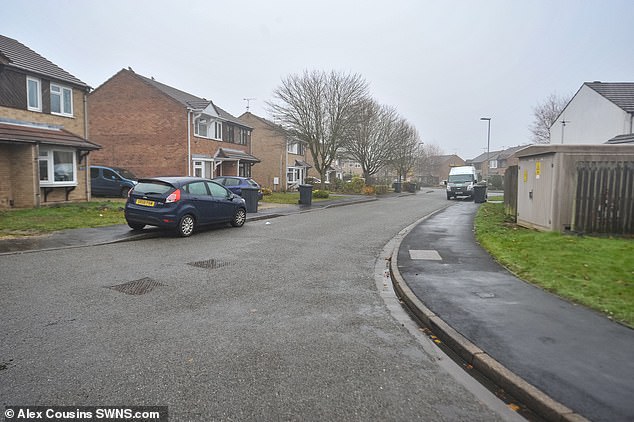 The mother, who was working hundreds of miles away at the time and asked to remain anonymous, said: ‘I’m horrified.

‘I was totally unaware my daughter was going to have a party – she had been staying at her grandmother’s but came back on Saturday afternoon.

‘There were people stood in the bath taking MDMA and the dining room ceiling came down, my TV was smashed and my bed was broken.’

Today, a skip left outside the house contained the remnants of a ceiling and damaged furniture taken out of the home.

Boxes were stacked in the window of the home on the corner of the quiet estate, with one builders van on the drive.

The mother added: ‘I’ve had to hire a skip to clear out everything that was damaged and start again. It’s a good job I own my own house, because if it was rented, I’d be evicted by now.’

One shocked resident has described the moment she arrived home in her car to the sight of ’50’ teenagers heading away from the street.

Aimee Pankhurst, 22, told MailOnline she had ‘never seen anything like this’ before in the quiet neighbourhood.

She said: ‘There was about five or six police cars. We came home as [the teenagers] were down this end of the street leaving. There was loads and loads of people.

‘As I pulled in I came to a complete stop and they were just surrounding the car.’ 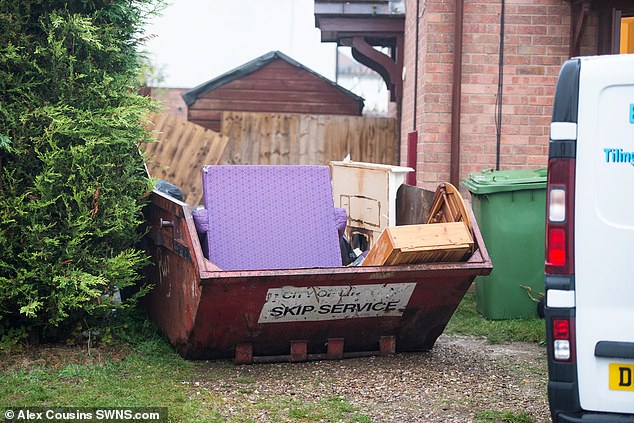 Ms Pankhurst said the music had stopped when she arrived home but bottles had been smashed along the pavement outside her home.

She added: ‘We got home about 9.30pm and it probably stopped about 45 minutes later.

‘The police moved them on but then there were obviously taxis and everything coming too. It was such a strange thing to see.

‘One of my neighbours who has been here over five years said it was the first time there had been any trouble at all on the estate.’ 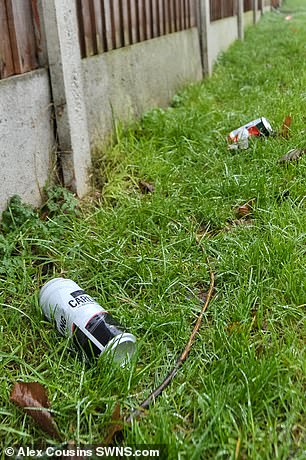 Empty cans of lager are strewn across a footpath on the estate.

Another resident said there was over 100 people on the estate but believed they had been ‘given a hard time’ and she ‘felt so sorry’ for the mother.

The woman, who wished to remain anonymous, said: ‘I am probably the opposite end to the other residents who are slating them. I sat watching telly and it was not even noisy. It was a handful of idiots.

‘Yes it got out of hand and there were a lot of people there, but a lot of what has been said is lies. I didn’t see any police dogs or bottles being thrown on police like I have seen online.’

Neighbour Chris Sellors said he first noticed the noise at about 4pm and then saw the teenagers.

‘My wife said it looked like Lincoln Christmas Market had come to the area,’ he said.

‘The whole street was full of teenagers. The police came and kids were throwing full bottles at them but in 10 minutes the police had corralled them.

‘I must say we didn’t feel threatened – it was just one of those surreal things that happen.

‘We picked up a few bits of broken glass but that was it. There was one lad aged about 15 or 16 who was sweeping the road – he was nothing to do with the party but he was just doing a good deed.’ 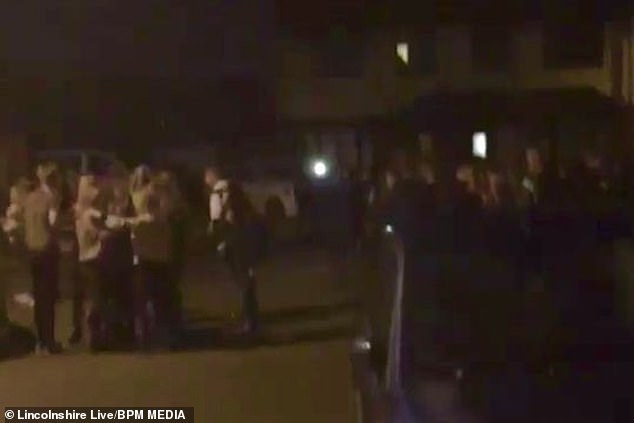 Teenagers gathered on the street on Saturday night, where neighbours complained of noise and disruption

Courtney Smith, 22, said she has never known anything like it in the three years she and her husband have lived in the street.

She said: ‘I got in at about 6pm on Saturday and the music was banging out.

‘I put my little boy to bed at about 7pm and then I went to bed but we were woken by the noise and I was not best pleased.

‘There were a lot of kids in the street and the police came. They had bottles thrown at them – we just wondered what was going on.

‘It’s normally really quiet around here. I don’t think anything like this will ever happen again – I hope not.’

A senior officer has since urged parents to ensure they know the whereabouts of their children and what they’re up to.