The Los Angeles Police Department released bodycam footage Tuesday of when a machete-wielding man was shot just when he was about to use the sword-like weapon to strike an officer.

The man in the footage was identified as Nathaniel Pinnock, who was shot down after he was alleged to have robbed an auto supply story on November 25.

He is seen in the footage, and added witness video, being chased by police who used a taser and bean-bag shotgun unsuccessfully stop him before shots were fied to immobilize him.

The man in the footage was identified as Nathaniel Pinnock, 22, who was shot down after he was alleged to have robbed an auto supply story on November 25 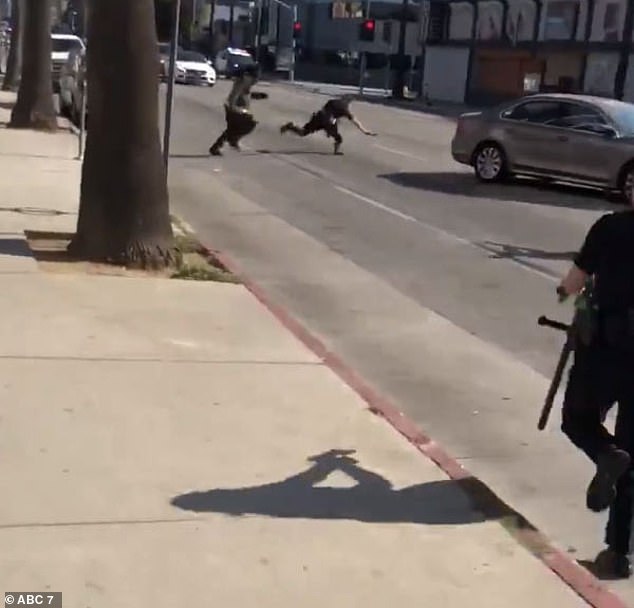 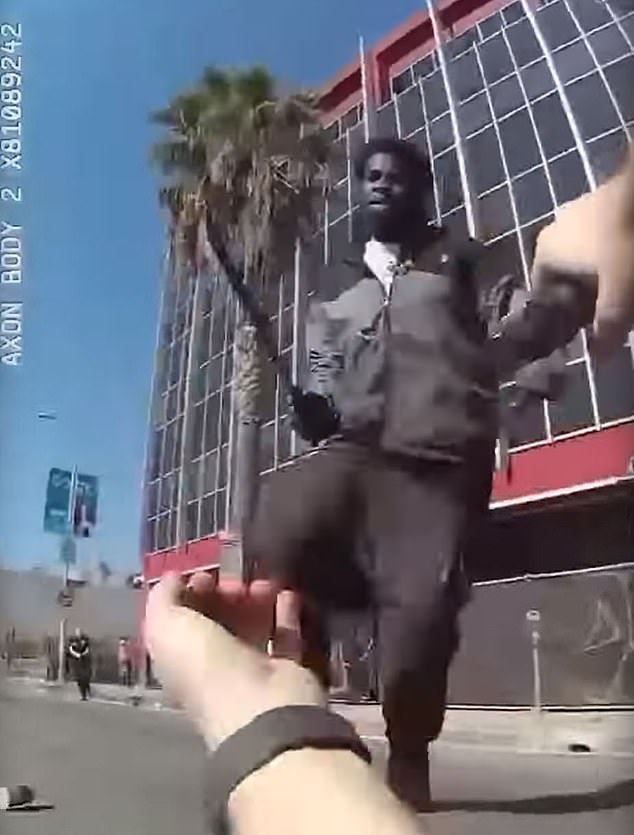 An officer’s body cam footage shows the suspect, later identified as Nathaniel Pinnock, 22, moments before he raises the machete to strike, but is gunned down

Pinnock is seen eluding cops, stealing a car from a fast-food drive thru, turning on an officer and lifting the sword-like blade as if to strike when police say they had to shoot him.

The bodycam video was released as part of a ‘Critical Incident Community Briefing’ prefaced by warnings of its graphic content by Josh Rubenstein, the LAPD’s public information director.

‘A word of caution, the images and information you’re about to see may be disturbing. When a police officer uses force to arrest a suspect, or defend against an attack, it is graphic and difficult to watch,’ he says.

The release of the video footage was to help give the public a better understanding of events as they unfolded and led to the shooting, police said, and the investigation may take up to a year to complete.

Captain Gisselle Espinoza, of the media relations division, explains what is seen through out the footage. The footage includes a mug shot of Pinnock, and plots the path he was alleged to have taken after the robbery.

Captain Gisselle Espinoza, of the media relations division, explains what is seen through out the footage. She said the incident began around 11:20 a.m. on November 25

The suspect, identified later as Pinnock, was armed with the machete when he was alleged to have robbed a local auto parts store at the corner of Fountain and Highland avenues.

Police are called and begin a foot chase.

Pinnock, wielding the machete, is then confronted by cops outside the drive-thru of a fast-food restaurant.

He is seen in the footage being ordered to put the machete down. He crouches down, but does not appear to release the machete.

Instead, the footage shows the suspect run into the drive thru lane, where he opens the drivers side door of a dark-colored car, which has been abandoned by its driver.

A witness’ cell phone video was included in the footage showing a different vantage point of the suspect running into the drive-thru and stealing a dark colored car. 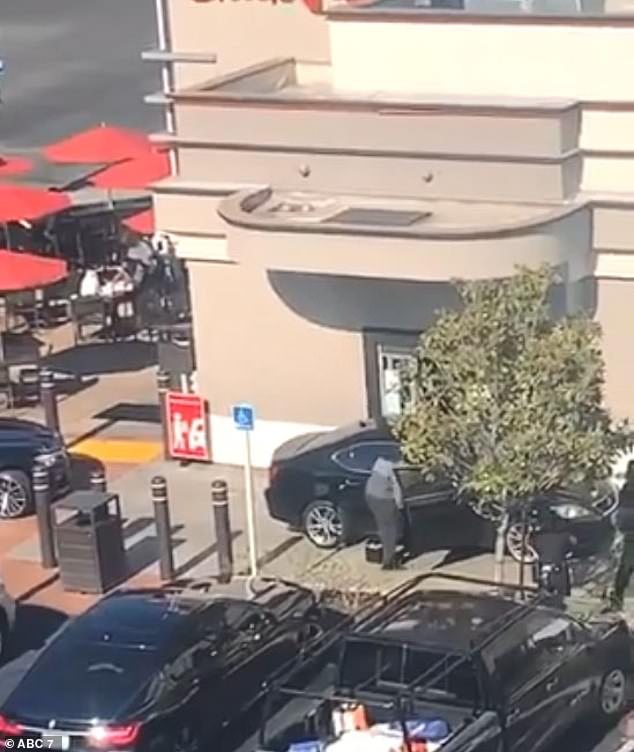 Cops surround the vehicle and one discharges a taser, which fails to stop the suspect. He is then seen in the footage driving off in the vehicle.

The footage shows the vehicle striking patrol cars in the drive thru before it is blocked from getting away.

The suspect is then seen resuming the chase, while still carrying the machete.

An officer’s bodycam shows the cop discharging a bean-bag shot gun at the suspect, who suddenly turns back at the cop.

‘Drop the machete!’ the officer yells at the suspect, when he starts backing away.

The footage shows the officer falling to the ground as the suspect raises the blade over his head to strike and gunshots are heard.

The footage then shows the suspect on the ground in the middle of an avenue. He is not moving as police officers, some looking unnerved, circle around him.

Cops said Pinnock was taken into custody and taken to a local hospital where he was pronounced dead.

The machete was recovered from the scene.