Scary dashcam footage captures high speed motorway crash – as debate erupts over which driver was in the wrong: ‘This was avoidable’

Video footage of a driver smashing their car after a last-minute attempt to merge lanes has divided Australians over who is at fault.

The dashcam footage shows a burnt orange Fiat 500 smashing into a car and spinning out of control on Canberra’s Yarra Glen road on June 14, after the driver attempted to change lanes.

The driver puts her left indicator on at the same time she starts to merge into the lane – failing to check her blind spot. 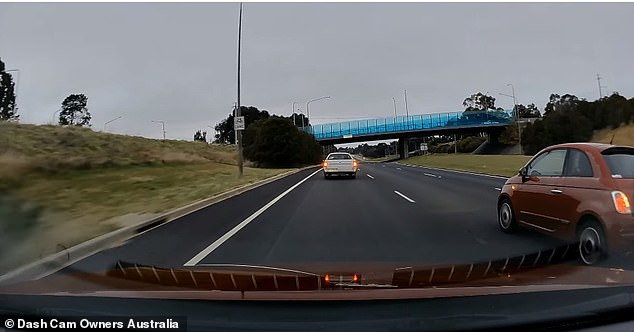 When the car starts to merge the dashcam driver honks his horn but its too late – the Fiat smashes into the front right-hand side of the car, spins and comes to a stop after it hits a concrete wall.

Exactly who was at fault has left viewers divided with over 2,000 comments on the video shared by Dash Cam Owners Australia’s Facebook page.

One user commented: ‘Fiat at fault and should have their licence taken away. They are a dangerous driver!’ 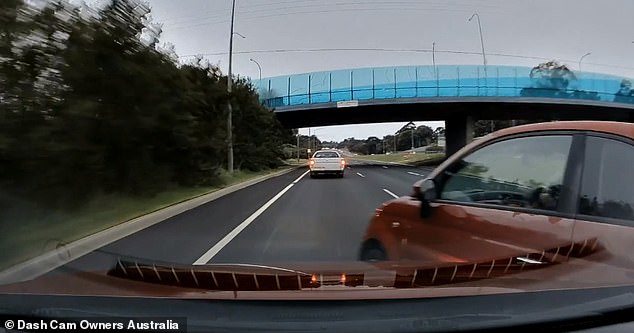 ‘They put indicator on and think they’re entitled to just move over. Indicate, look then change lanes if safe to do so,’ another wrote

‘Proof that an indicator doesn’t give you a special bubble of protection to do whatever TF you want,’ a third chimed.

However, some eagle-eyed viewers spotted the dashcam driver sped up from 72 km/hr to 76km/hr  seconds before the crash.

‘Interesting that your speed increased after the Fiat’s indicator came on. You could have just as easily backed off those few kms/hr,’ one user wrote.

‘Kellogg’s called, they want your licence back. You sped up into their blind spot then didn’t make any effort to avoid,’ another user commented.

Most viewers noted both drivers were at fault but said the accident was avoidable if the dashcam driver had pressed the brake instead of the accelerator. 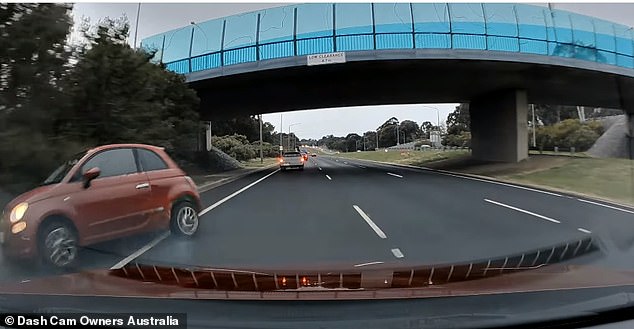 ‘Maybe a bit less energy leaning on your horn and a bit more applying the brakes and you could’ve avoided a crash,’ one user wrote.

‘Dash cam driver needs to learn how to back off,’ another said. ‘Whether or not you have the ‘right of way’, you are still responsible for avoiding an accident if you can. And this was avoidable.’

‘Fiat at fault for sure , no argument there , but also , it clearly shows you had enough time to brake and avoid the accident,’ one comment read.

Another user commented: ‘Amazing how much time and effort goes into that horn press and not the brake.’

‘Perfect example of ignorance vs arrogance,’ another viewer wrote. ‘One made a mistake (one many of us have made), one made a concerted effort that lead to that mistake eventuating into a crash.’

‘I reckon Tesla and all the other manufacturers developing autonomous driving tech could help reduce crashes if they just made the horn apply pressure to the brake pedal … time to step up Elon (Musk),’ one user wrote. 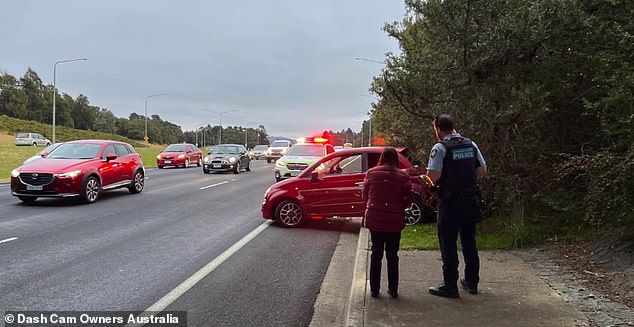 The footage divided viewers -with many commenting both cars were at fault and the accident was easily avoidable (Pictured, Police talking to the Fiat driver)