This is the extraordinary moment a dog owner got on his knees for forgiveness after his two Staffordshire Bull Terriers ‘ripped apart’ a family cat while off their leads in an attack captured by a doorbell camera.

Sharon Boalch, 50, and her daughter Shakira Jefferies, 16, are bereft after the fatal attack on their beloved Cleo, which Miss Jefferies saw out of the window of their Worcester home.

CCTV shows the black and white cat being thrown around by the dogs with one of them clamping its jaws down and pinning her to the ground until dead.

The owner can be seen trying to stop them they struck outside the house next to a city park but cannot stop his dogs tossing the cat around and killing her.

The video then shows the unnamed man getting on his knees and apologising to the distraught mother and daughter who break down in tears and collapse to the floor in grief.

The attack has been reported to the police and the incident will be investigated. 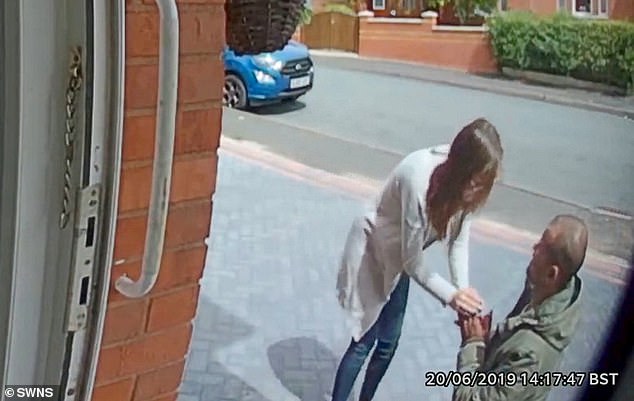 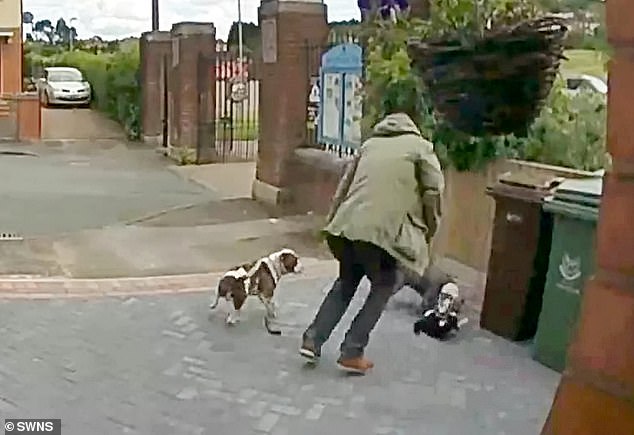 The dogs were on their way back from the park, without a lead, when they pounced on the pet and killed it 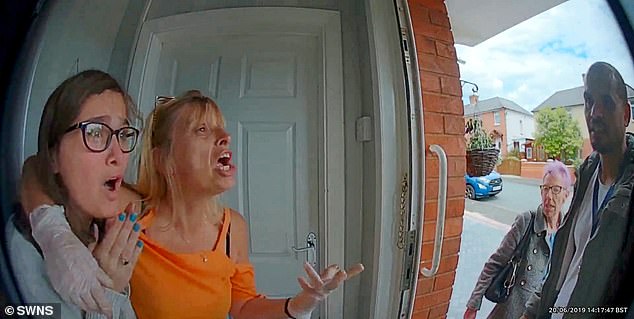 This is the moment Sharon Boalch, 50, and her daughter Shakira Jefferies, 16, learned from the dogs’ male owner that she was dead after a passer-by (far right) knocked on the door 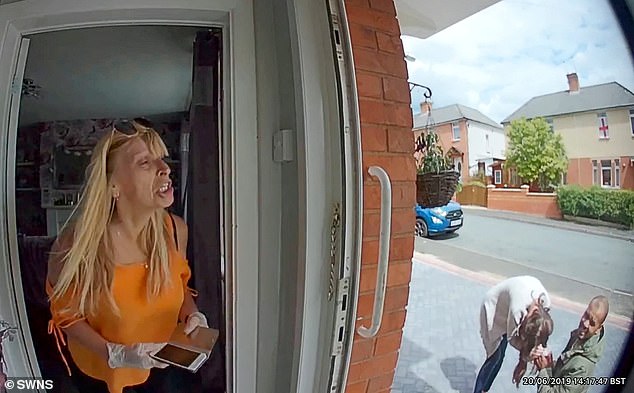 The owner of the dog, who has not yet been named, dropped to his knees and begged Shakira (right) for her forgiveness while her mother screamed: ‘Dogs should be on a lead’ 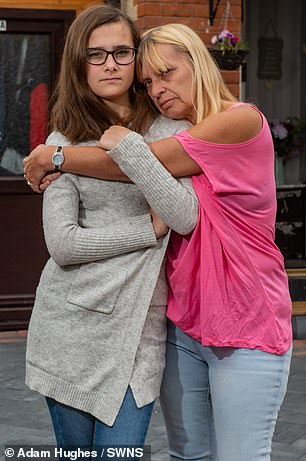 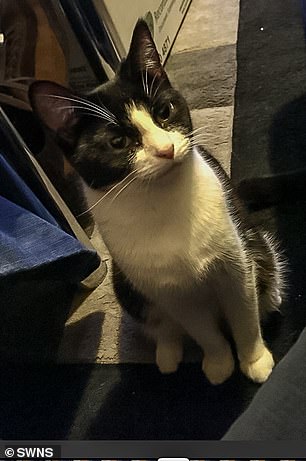 The owner, who has not yet been identified, arrives at their front door and says: ‘I was in the park and my dogs were following a black cat and they killed him. I was going to take him to the vet.’ 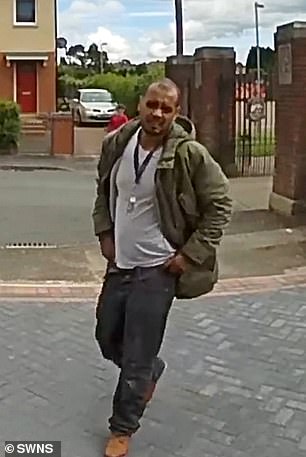 At one point he even gets down on his knees and says ‘I’m so sorry’ as Shakira weeps outside her house and her mother Sharon yells at him: ‘Dogs should be on a lead’.

Shakira said afterwards that she saw the dogs attacking the cat and dragging her into a nearby park but didn’t realise it was Cleo until it was too late.

She said today: ‘I was in the front room as it was happening. I didn’t realise it was Cleo until a neighbour knocked on the door and asked if our cat was black and white.

‘I collapsed on the floor screaming. I wish I’d helped her. I’d have rather been injured by the dogs than to lose my cat.

‘My mind keeps going back to seeing her dead on the ground. I haven’t slept in days and I can’t eat.

‘She didn’t deserve to die the way she did. I just want my cat back.’

Mrs Boalch added: ‘My daughter could hear all this commotion. She ran outside and saw what happened and came running to me in the back garden, screaming.

‘I was sat on the doorstep crying and I had my daughter in my arms. It was awful. I cried all night. I can’t get it out of my head.

‘And the fact that it happened on my drive, it’s disturbing.

‘The footage clearly shows the dogs were out of control and going wild. These were big dogs. They should be muzzled.’ 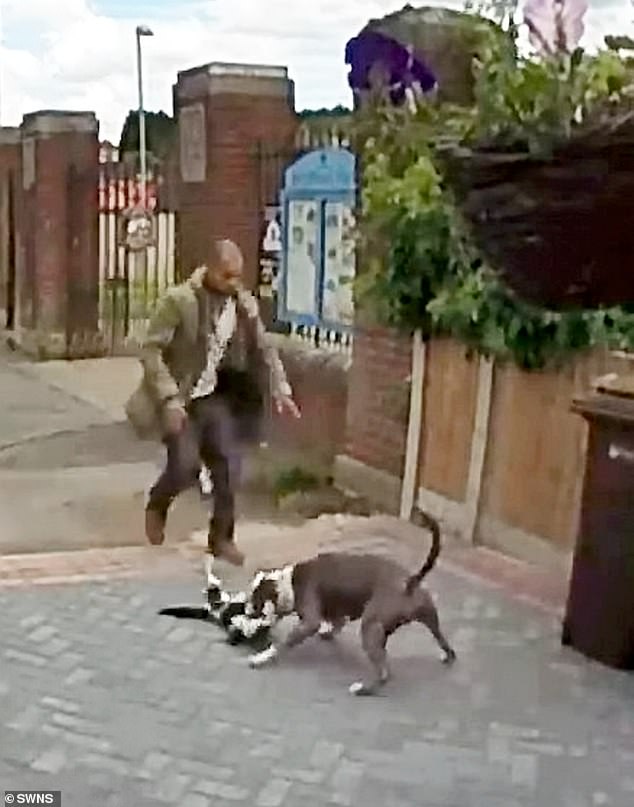 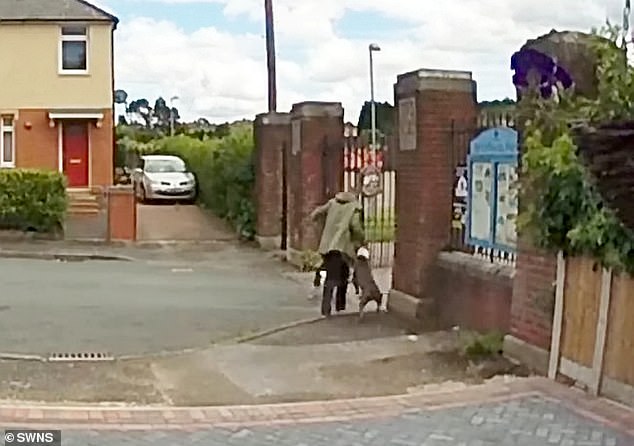 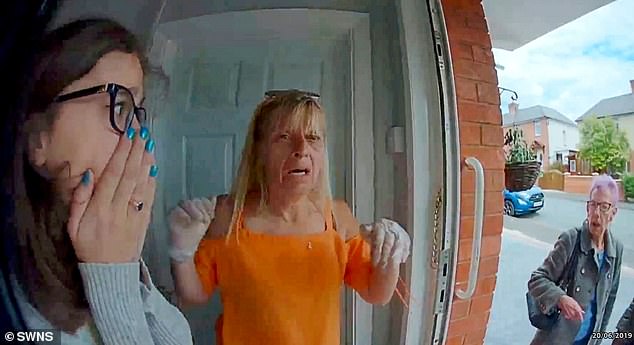 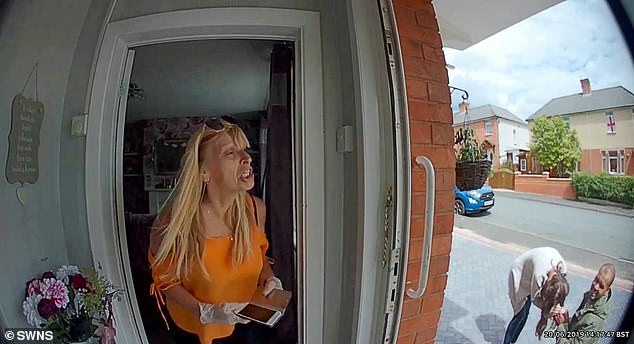 Mrs Boalch was yelling at the man as he clasped Shakira’s hands and kept saying: ‘I’m so sorry’ 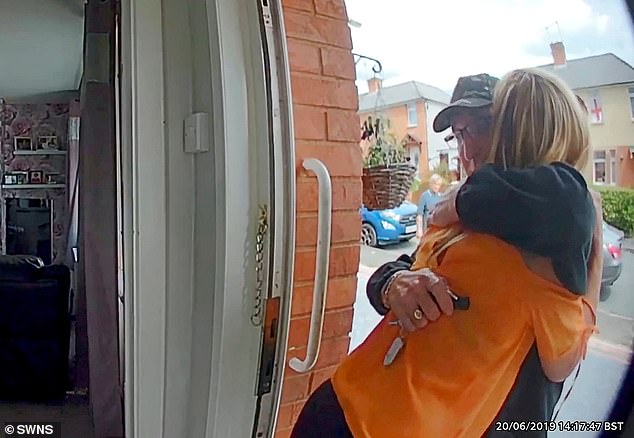 Mrs Boalch claims the owner of the dogs said he would take Cleo to a vet but she said the family have not heard anything since.

She has also contacted local vets in the area but none reported having Cleo brought in, meaning the family do not know here Cleo’s body had been left.

Mrs Boalch added: ‘I was in such a mess I didn’t realise she was dead, I presumed she was badly injured. It all happened so quickly.

‘We can’t even bury her to say goodbye. We are devastated and my daughter won’t stop crying. We will never get closure.’ 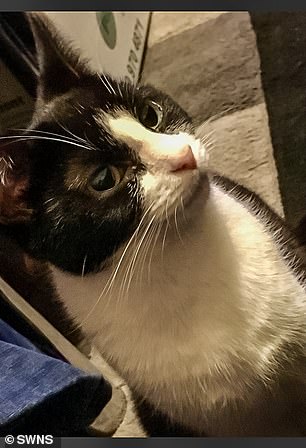 Cleo (pictured) was one of three cats belonging to the family

Shakira’s step-father, Ian, 56, watched the footage following the attack and said the dogs were off their lead and jumped onto Cleo unprovoked.

He said: ‘She didn’t have a chance. She was torn into pieces.

‘My wife was too distraught. She didn’t get any details from this man.

‘It’s devastating for our daughter. The cat used to sleep in her room. It’ll take her a while to get over this.

‘I am so angry. I’d like to see him prosecuted. Any dog that is capable of doing that should be muzzled.

‘Once they’ve done it once they have that lust for blood and will do it again, and next time it could be a child.’

Mother-of-four Sharon, a full time carer for her two autistic sons Kieran, 18, and Joshua, 19, added: ‘I want to see the owner prosecuted and the dogs destroyed.

‘I has been devastating for all of us but especially for my daughter. She was sat watching her favourite band BTS on the TV as she had just finished her GCSEs.

‘Then all of a sudden she heard this commotion. Our neighbour Dot knocked at the door and we knew something serious had happened. 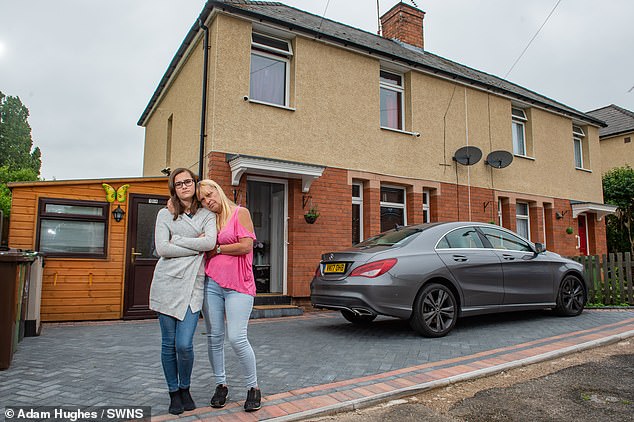 ‘Shakira went outside and there was blood all over the driveway, she then saw her pet cat dead on the ground. She was howling with grief.

‘There were children in the street as young as four who saw it happen. Next time it could be them. Those dogs now have a taste for blood.

‘I’m just glad we had the doorbell camera as we have clear pictures of the owner. One officer said he though he recognised him so hopefully he will be arrested.

‘We haven’t slept since it happened. We can’t understand why these powerful dogs were off the lead.

‘The guy was apologetic but it isn’t enough, those dogs were out of control and need to be stopped. Next time it could be a kid.’