Horrific video footage shows a 70-year-old San Francisco woman being attacked by a group of juveniles in broad daylight.

On Sunday, the victim, who goes by the name Mrs. Ren, made one of her first public outings since the COVID-19 pandemic began, after concealing herself inside for most of the last two years, ABC 7 reported.

‘Yesterday one of the first days for a long time she went out, and this is what happened,’ Mrs. Ren told ABC 7 through an interpreter as she laid in bed in pain from the attack.

A security camera from the complex located at the 100 block of San Francisco Street shows the four teens approaching the elderly woman and dragging her to the floor before one wearing a yellow and black baseball cap stomps her in the face.

A 70-year-old San Francisco woman was attacked in broad daylight by a group of teenagers. The unidentified suspects approached the woman, Mrs. Ren, asking for the time before proceeding to hit her when she wouldn’t surrender her iPhone 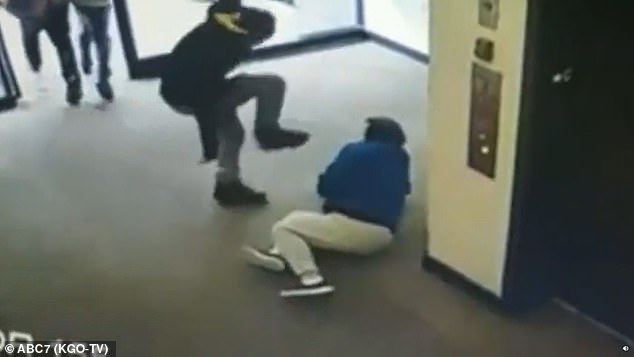 Footage shows horrific attack at the elderly woman’s apartment complex. Mrs. Ren was punched to the ground and continuously stomped on 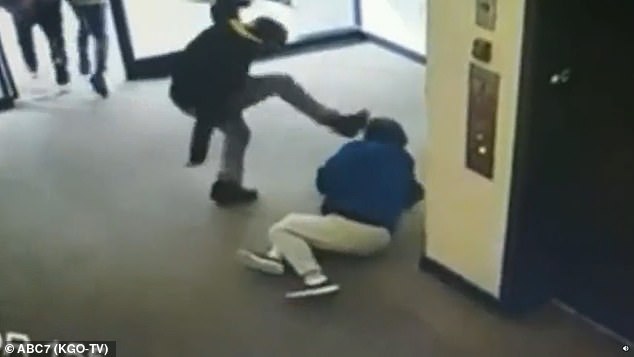 Security footage captures the moment Mrs. Ren was on the floor when one suspect came back to stomp her in the face before taking off

Mrs. Ren said the suspects first approached her outside the building to ask her the time. She told them it was ‘5 o’clock’ while showing them her watch.

‘They search my body, and I quickly realize they’re up to no good,’ Mrs. Ren said.

She attempted to get into the elevator of the complex, refusing to give the juveniles her iPhone. They then followed her and pushed her down in anger at her resistance. She was punched in the head multiple times before being dragged onto the floor and kicked.

The teenagers took off but returned when Mrs. Ren attempted to hide. 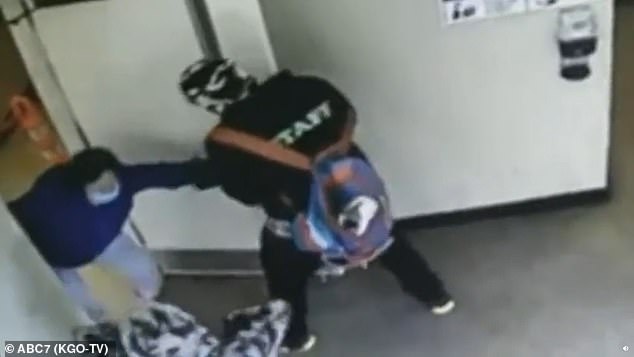 Mrs. Ren attempted to flee to a hallway for safety, but struggled to shut the door. The suspects see the elderly woman and chase after her. One suspect attempts to pull her by the arm while another hits her on the head. The suspects continue to assault her as they ask for her keys 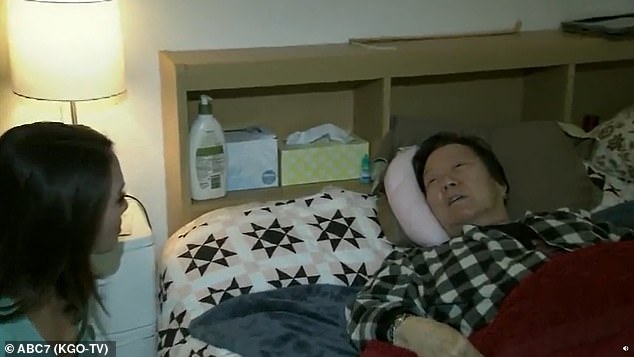 Mrs. Ren remains in bed after the horrific incident on Sunday. She suffers from extreme pain after she was brutally attacked, she told ABC 7 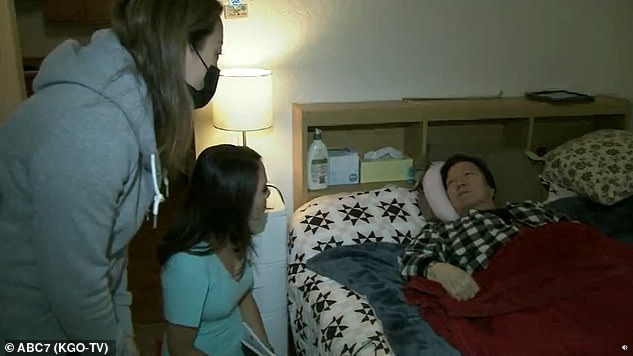 Sunday was the first time Mrs. Ren went outside since the start of the COVID-19 pandemic. Her daughter, who has remained by her side, says she has always heard stories of these assaults on the elderly, but ‘never expected’ it to happen close to home

Footage shows Mrs. Ren fleeing to a hallway and struggling to shut a door when two of the juveniles approach her. One suspect wearing a gray camouflage hoodie is seen hitting the 70-year-old on the head while one in a black hoodie with the words ‘staff’ and a multi-colored backpack pulls her by the arm as she falls to the ground.

The suspects grabbed her keys before taking off.

Mrs. Ren is in bed recovering from her injuries. Her daughter says she ‘never expected this to happen.’

Following the incident, Mrs. Ren was treated for non-life threatening injuries. San Francisco Police Department told DailyMail.com that no arrest have been made. Anyone with additional information is urged to call the SFPD Tip Line at 1-415-575-4444 or Text a Tip to TIP411 and begin the text message with SFPD. 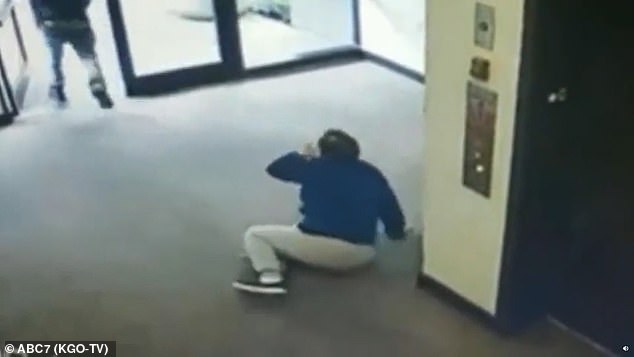 The suspects took off with her iPhone and keys. SFPD have not responded to the DailyMail in an inquiry for additional information

Asian hate crimes have been widely reported in the past few years. In New York, a woman who was filmed in a viral video pepper spraying four Asian women in a racially motivated attack in Manhattan in June was formally charged with assault.

Manhattan District Attorney Alvin Bragg announced the indictment of Madeline Barker after she pepper-sprayed a group of Asian women on Hudson Street in the meatpacking district while spitting racial remarks.

‘Hearing the hateful and discriminatory words, “go back to your country” is deeply painful and these women allegedly heard them before enduring the physical pain of Ms. Barker’s pepper spray. People of all backgrounds deserve to feel safe,’ Bragg said. 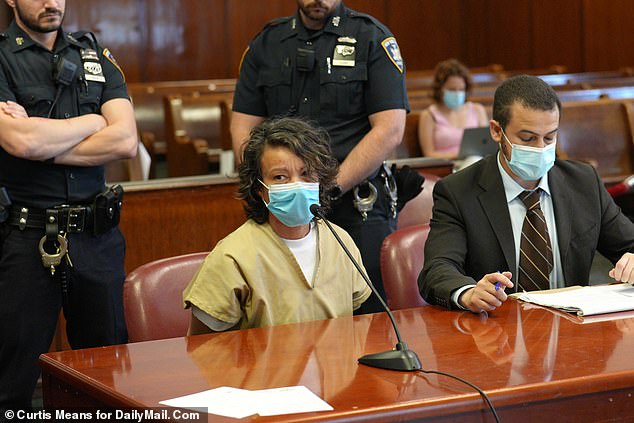 Madeline Barker, 47, was arraigned in July for attacking four Asian women last month. The women were standing right where she was sitting when she decided to attack them 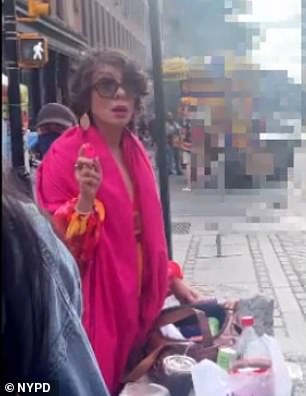 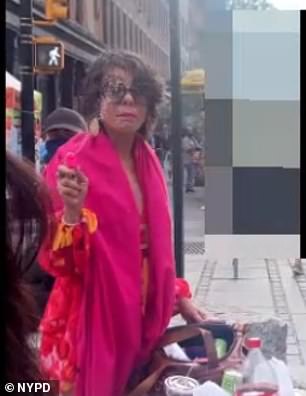 The suspect, 47-year-old Madeline Barker, was caught on camera hurling racial insults at the victims, such as ‘Go back to where you came from’ and you don’t belong here,’ during the June 10 altercation. The footage subsequently went viral and led to police arresting Barker

The four women experienced a burning sensation and pain in their eyes after the 41-year-old sprayed them for standing near where she was sitting.

The incident, which took place in a public plaza in the Meatpacking District, subsequently sparked a search for the then-unidentified woman – dubbed ‘Karen’ by internet users.

Shocking video recorded by the victims shows the moment the woman, dubbed ‘Karen’ by social media users, starts arguing with the four Queens women, all in their 20s, in Manhattan’s Meatpacking District on Saturday.

The victims, who asked to remain anonymous, told ABC 7 that they were checking out a flower installation when the woman suddenly picked a fight with them, and after accusing them of harassing her, the Karen pepper sprayed the four.

‘It was so painful, one victim said. ‘I couldn’t open my eyes for about 30 minutes.’

A bystander then filmed the victims walking away from the argument, but the Karen continues to yell at them and walks up behind one of the women and blasts her directly in the eyes with the pepper spray before leaving the area.

Barker, of Florida, was ruled a possible flight risk at her first court appearance Saturday in Manhattan, and ordered held on $20,000 bail.