A horse rider has had her face rebuilt after it was ‘crushed backwards’ when she was trampled on by her own steed.

Dr Elizabeth Keating underwent a gruelling 10-hour operation. Surgeons used photos of her before the accident to make sure her face was realigned correctly.

Her upper jaw was broken in three, her palate was split, both cheekbones fractured and nine ribs broken after her horse got spooked.

But surgeons at St George’s Hospital were able to rebuild her face using 11 plates and 41 screws. They said such devastating injuries are ‘rare’.

Dr Elizabeth Keating underwent a gruelling 10-hour operation. Surgeons used photos of her before the accident to make sure her face was realigned correctly

Dr Keating, 38, a paediatric registrar who trained at St George’s, said: ‘The impact basically crushed the middle of my face backwards.

‘ I was incredibly lucky – both to have been discovered by passers-by, but also to be brought to St George’s, which has so many specialists in one place.

‘I had panda eye bruising and my face was so swollen I was hardly recognisable – so to be back on my feet now, looking back to how I was, is amazing.’

The junior doctor added: ‘I am grateful to everyone who looked after me – so many people were involved in my care.’

Dr Keating was out horse riding in October 2017 before she had to dismount from her horse when it was spooked by a noise in the woods.

However, it trampled over Dr Keating and ran right across her chest. 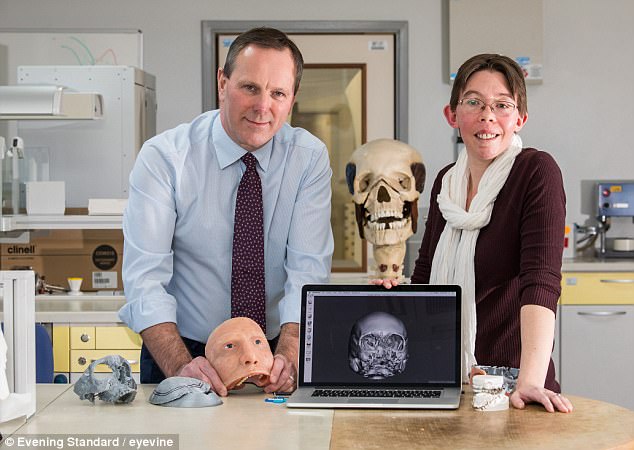 Every bone between Dr Keating’s palate and eye sockets was broken, according to Nick Hyde (pictured together), who led the operation

Passers-by called an ambulance and she was rushed to the Major Trauma Centre at the Tooting-based hospital.

A&E doctors were able to stabilise her before she was passed to the maxillofacial department eight days later for surgery.

The procedure involved nine surgeons and theatre staff to rebuild her face, which had collapsed under the weight of the horse’s hoof.

Her family gave surgeons a photo of her from before they accident, which they used in theatre to ensure they recaptured her original bone structure.

Every bone between Dr Keating’s palate and eye sockets was broken, according to Nick Hyde, who led the operation.

He said: ‘Multiple injuries to the face such as this are rare, and the surgery Elizabeth required was complex and labour-intensive.

‘However, the end-result is very pleasing, and a credit to the many different people involved in her care.’

Mr Hyde said the surgery was only possible because of the ‘real team-effort’ of everyone involved in the surgery.

HOW CAN SOMEONE’S FACE BE REBUILT?

How surgery for head and face deformities is done depends on the type and severity of deformity, and the person’s condition.

The medical term for this surgery is craniofacial reconstruction.

Surgical repairs involve the skull (cranium), brain, nerves, eyes, and the bones and skin of the face.

That is why sometimes a plastic surgeon (for skin and face) and a neurosurgeon (brain and nerves) work together.

The surgery is done while you are deep asleep and pain-free. The surgery may take 4 to 12 hours or more. Some of the bones of the face are cut and moved.

During the surgery, tissues are moved and blood vessels and nerves are reconnected using microscopic surgery techniques.

Pieces of bone (bone grafts) may be taken from the pelvis, ribs, or skull to fill in spaces where bones of the face and head were moved.

Small metal screws and plates may be used to hold the bones in place. Implants may also be used. The jaws may be wired together to hold the new bone positions in place.

To cover the holes, flaps may be taken from the hand, buttocks, chest wall, or thigh.