Hospital coronavirus admissions were over-reported at peak of pandemic

The figures of those admitted to hospital for coronavirus during the peak of the pandemic were over-reported, it was revealed last night.

Britons who were suffering from other illnesses were included in data collected to monitor the virus outbreak, according to the Daily Telegraph.

The Government’s Science Advisory Group for Emergencies (SAGE) found patients were categorised as Covid-19 hospital admissions if they had ever tested positive for the disease.

And they were included in the number of people who were admitted specifically for coronavirus.

Around 20,000 people a week were admitted to hospital with Covid-19 at the peak of the crisis in April, according to government statistics. The correct figure is not yet known.

It comes after a recent review into the way Public Health England (PHE) calculated coronavirus deaths. More than 5,000 people who died from causes unrelated to the virus were initially included in the statistics – a tenth of the overall death toll.

One top expert today said the statistical error was more widespread for hospital admissions than deaths – but told BBC Radio 4’s Today programme that it was only a ‘minor inflation’.

The NHS denies the figures were being over-reported nationwide and claimed the miscounting only occurred at one trust.

Around 3,000 people a day were admitted to hospital with Covid-19 at the peak of the crisis in April, according to government statistics. The correct figure is not yet known

Government figures show around 20,000 were in hospital every day during the darkest days of the crisis in April

And around 3,000 coronavirus-infected patients were being treated on ventilators each day between April and May 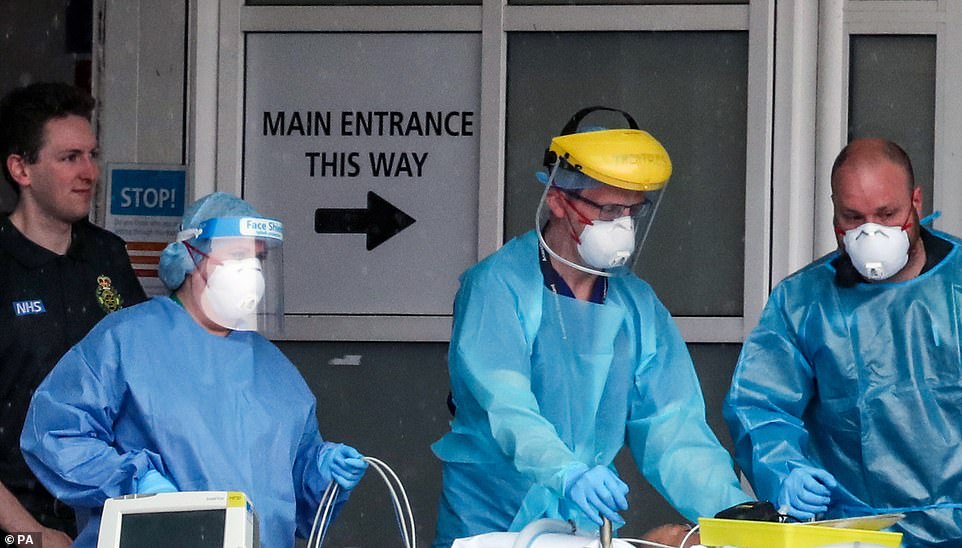 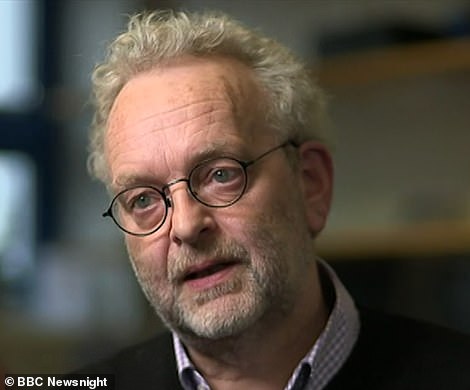 Professor Graham Medley, of the London School of Hygiene and Tropical Medicine, was asked to examine the situation by Sage

The UK’s coronavirus death toll was then revised and fell by more than 5,000 as it only included those who died within 28 days of a positive test. Before, it counted anyone who had ever died in England – meaning no-one could ever truly recover.

Professor Graham Medley, an infectious disease modelling expert from the London School of Hygiene and Tropical Medicine, was asked to examine the situation by Sage.

Professor Medley told the Daily Telegraph: ‘By June, it was becoming clear that people were being admitted to hospital for non-Covid reasons who had tested positive many weeks before.

‘Consequently, the NHS revised its situation report to accommodate this.’

He told BBC Radio 4 Today’s programme this morning that it was ‘inevitable’ hospitals would over-count admissions.

Professor Medley said: ‘You don’t want to undercount and so the definitions made at the start will always result in minor inflation of numbers of people going in and then inevitably that gets corrected. The definitions of what is a covid case will continue to change.’

‘By the time you get to June, there are people coming in with a twisted knee which is clearly unrelated to Covid-19.’

Experts have warned that the over-counting is a worry because the hospital admission figures had been used to look at the current circumstances of the crisis. 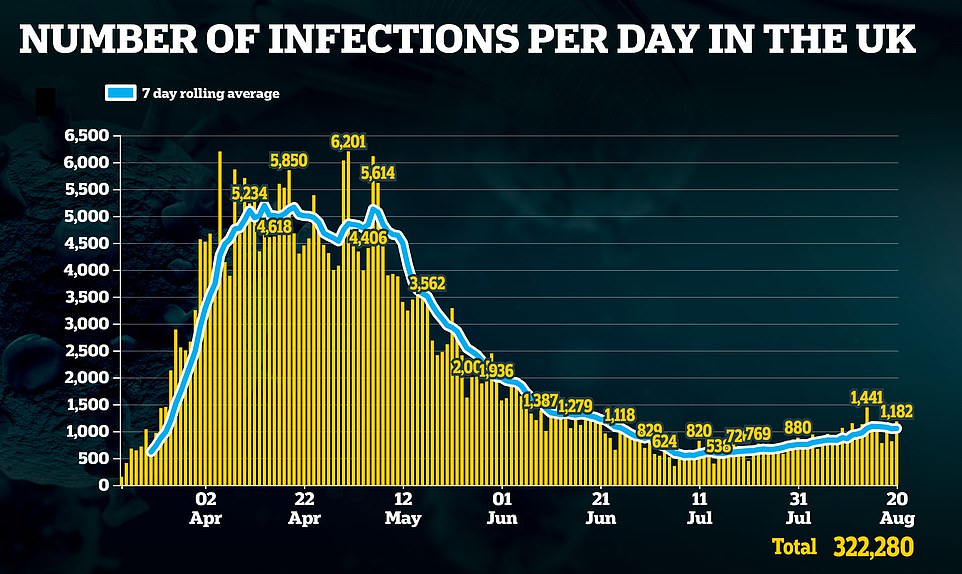 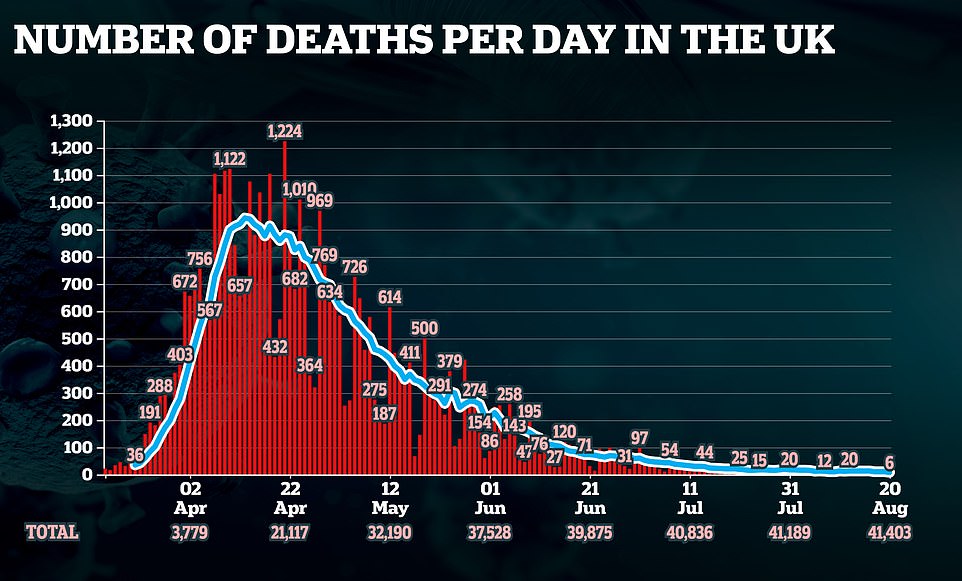 GOVERNMENT KNOCKS OFF 5,000 DEATHS FROM OFFICIAL TOLL BECAUSE OF ‘STATISTICAL FLAW’

The discrepancy is just one in a string of issues with the Government’s coronavirus data.

Officials this month confirmed they were changing the way they count the number of Covid-19 deaths because PHE had been including anyone who died of any cause after a positive test for the disease.

Even someone who was diagnosed in March, then recovered and died after getting hit by a bus in August would have been included in the Covid-19 death toll.

Now the Department of Health only includes people who die within 28 days of their diagnosis, in an attempt to reduce the number of people included wrongly.

NHS England and the devolved governments in Wales, Scotland and Northern Ireland had been using the 28-day cutoff throughout the outbreak. As a result of the change the official death count dropped by 5,000.

PHE still publishes weekly stats showing how many people died within 60 days of a positive test, to try and include people who have long stays in hospital or long-lasting Covid-19 illness.

Professor Carl Heneghan, director of the Centre for Evidence-Based Medicine at the University of Oxford, said: ‘The admissions data is a crucial point.. I’d say it is more important than the death data because it is the best marker of the impact of the disease.’

The problem was first noticed on June 18, when government scientists made their worries clear that non-Covid patients were being added to the outbreak statistics, according to Sage minutes.

Public Health England, the NHS Medical Director and Professor Medley were asked to assemble a group.

‘So, we saw with the death statistics, that initially a “Covid death” was defined as any death in which the person had previously tested positive,’ Professor Medley said.

‘The same is true, but even more so, for hospital admissions. In order to capture all the potential manifestations of the disease at the start of the epidemic, all admissions of people who had tested positive were counted as “Covid-related admissions”.’

The NHS claimed it told hospitals trusts in June that they should only count admissions as any patient who had tested positive for Covid-19.

It claimed it then found out from government advisers that Imperial College Healthcare NHS Trust was recording anyone who had ever tested positive for Covid-19.

The discovery prompted them to issue further guidance to urge health bosses to only include patients who were diagnosed ‘recently’. But it did not specify what classed as recently.

NHS England then sent out repeated guidance on July 1 urging trusts to only count patients who had recently tested positive.

NHS England said there had not been a change in the trend line for admissions from July.

It is not known how many people were wrongly registered as coronavirus patients before July. Around 450 people were admitted to hospital at Imperial Trust between the start of the pandemic and July 1.

Experts say the correct number is needed to also work out death rates.

Professor Heneghan added: ‘If admissions are going up, then that should drive the lockdown. But currently you have people with active infections, those who have tested positive but have been discharged, and those who have contracted it in hospital, so it isn’t helpful.

‘This really does need sorting out as we go into the winter, otherwise we get into this noisy position where we can’t understand what’s going on.

‘There will be loads of people coming in with different conditions who have survived this, so it’s a huge problem. It’s clouding our judgment as to whether the disease is having a significant impact.’

Professor Stephen Powis, National Medical Director of NHS England said: ‘It is completely untrue to claim there has been any ambiguity in the data on Covid positive hospital inpatients.

‘For the safety of both patients and staff it is obviously sensible and important that NHS trusts monitor, track data on patients in their hospitals that have Covid, whether admitted as a Covid patient, or for another condition.

‘The instructions to hospitals in England have not fundamentally changed since the start of the pandemic, with updated advice to hospitals being published as scientific evidence has developed, as hospitals and sage requested further advice, and as the availability of testing has become more widespread.

‘Data on hospital admissions, people in hospital with Covid and people on mechanical ventilation in England were published and presented daily at the Downing Street press conferences, along with clear and transparent explanations online, including for example clarification that some admissions in devolved administrations had to be reclassified and included suspected and not just confirmed cases.

‘Throughout the pandemic we have worked with Sage and follow their advice to ensure data is collected in a manner that supports their important work including through mutually agreed changes to existing guidance.’