Picking out the perfect Halloween costume is a favorite annual tradition for many – but for a group of Illinois parents with premature babies, the chance to dress up their child in a fun and creative outfit marked a much more meaningful milestone.

Advocate Children’s Hospital in Illinois launched a Halloween costume contest for its premature babies this year, with parents of nearly 40 tiny tots in the neonatal ICU centers dressing their children in festive costumes, with some even decorating the incubators to truly get into the holiday spirit.

But the weekend meant much more than spooky fun, it was also a rare moment for these parents to hold their little ones while dressing them up in their costumes  for their very first Halloween.

The Boy Who Lived: Advocate Children’s Hospital in Illinois held a Halloween costume contest for its premature patients in two locations, including babies like Atticus, who was Harry Potter 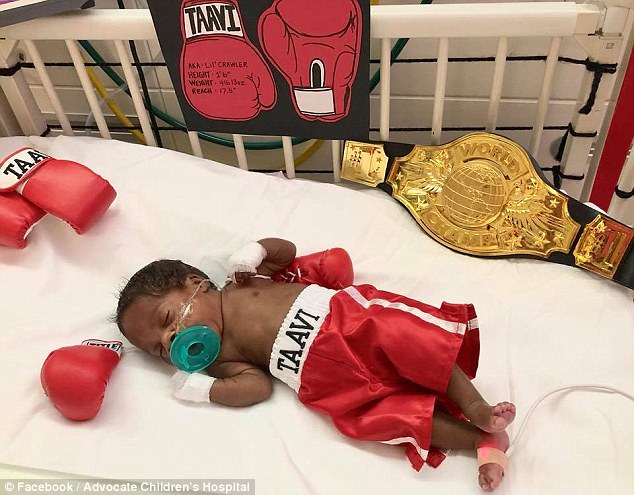 Fight night! Nearly 40 babies participated in the contest, with votes being counted via Facebook likes, with infants like Taavi in boxing gear raking in the online compliments 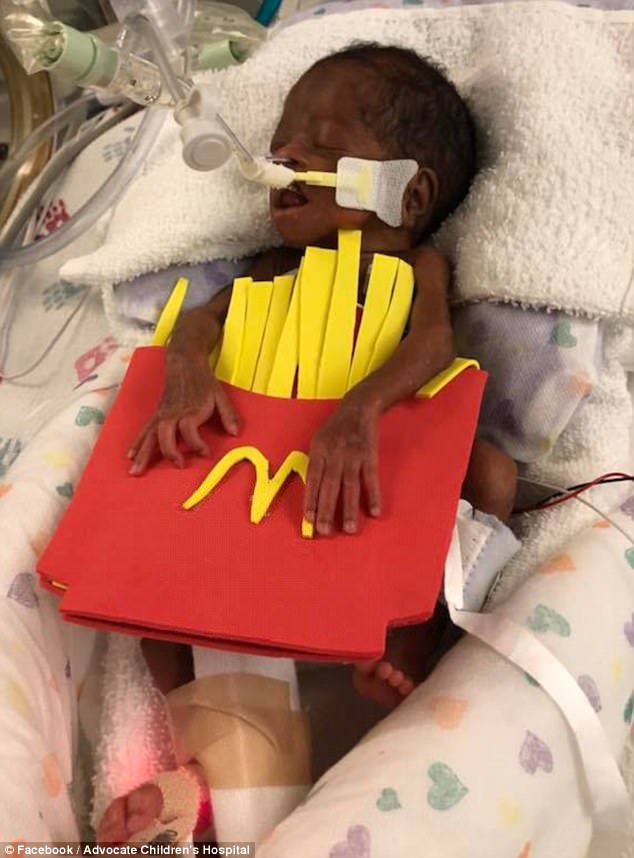 She’s lovin’ it! Jada’s parents dressed her up as tasty McDonalds fries for her first Halloween

The hospital, with two participating locations in suburbs Oak Lawn and Park Ridge, Illinois, throws the costume contest every year and took to Facebook to share their heartwarming photos.

The pictures launched a voting pool with the top winners taking home Babies R Us $150 and $25 – $50 gift cards, and the contestants were incredibly impressive with babies dolled up as boxers, Wonder Woman, minions, Harry Potter, pumpkins and tasty McDonald’s fries.

For the hospital, the festive competition is a fun way for parents to relax with their babies while they’re in the ICU unit.

‘We have a lot of little preemies at Advocate Children’s Hospital that have been fighting for one, two, even three months, and this brings a little bit of normalcy into their parent’s life,’ contest organizer Deb Skopec said to ABC.

‘They get to have a little fun, which they don’t always have on a daily basis here,’ she added.

Parents get to take their babies out of their cribs for a fun dress up session and play with their little ones. And according to Deb, year after year the contest is a hit.

‘[It] has been such a phenomenal thing. It allows parents to dress their babies, to plan a costume and to really bring out their baby’s personalities,’ she shared. 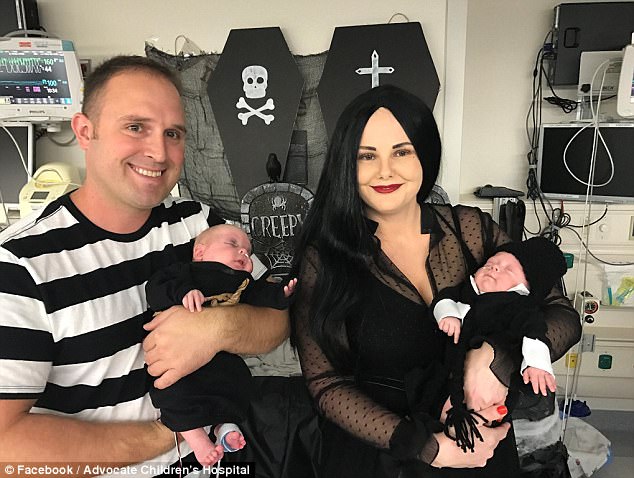 A family affair! Parents Michael and Vivianne decided to dress up along with their children as the Addams family, putting their tots in black smocks and hats for the role 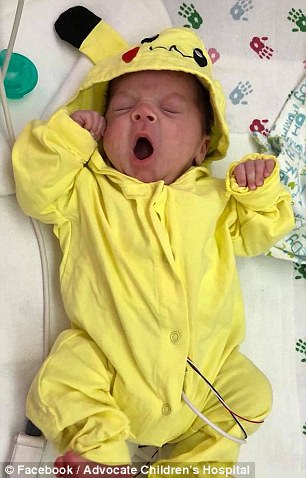 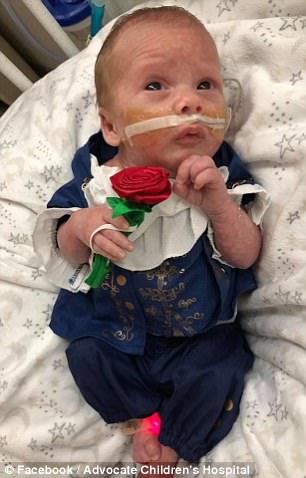 Just like TV! These parents dressed their babies as Pokemon’s Pikachu and as the beast from the Disney reboot Beauty and the Beast, complete with rose in hand 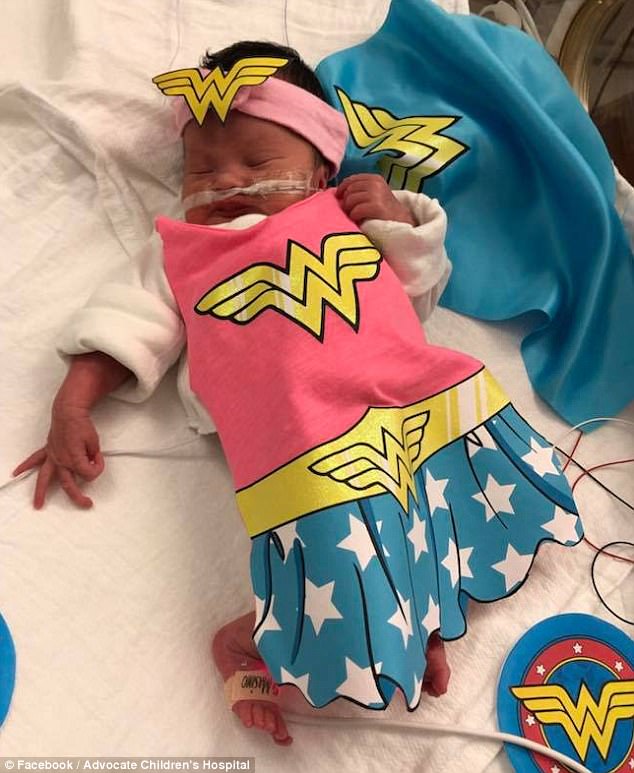 She’s a wonder! Parents Shelley and Rob Paz dressed their daughter Adaline (above) as Wonder Woman with a tiara, cape and dress as well as matching quotes to deck out her crib 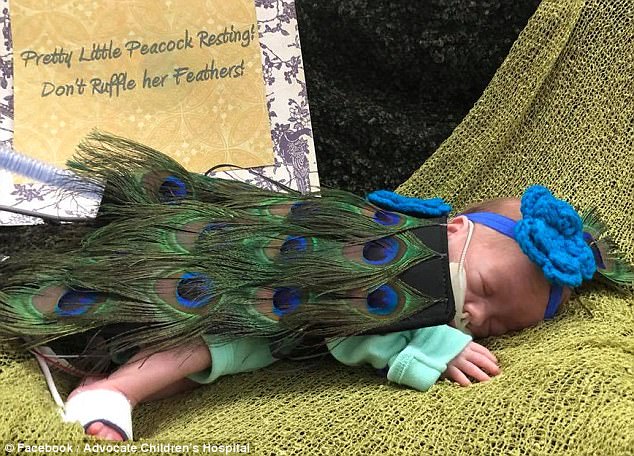 Not to be ruffled with! Six-week-old Sienna was created into a resting peacock and napped next to her sign that said ‘Don’t ruffle her feathers!’

For many, it’s a intimate moment where parents can finally hold their babies, a rare occasion for the safety of the child’s delicate health.

The families’ costumes did not disappoint this year. Thirty-six babies were decked out from head to toe in precious costumes, with popular leaders in the online vote being pirates, peacocks, mermaids, and superheroes.

One mom Julie Kunik dressed her six-week-old daughter Sienna, who was born at 28 weeks, as an elaborate peacock for the competition.

‘Most of the time you’re in the NICU, you don’t get to hold or touch the baby, so today was very special,’ Julie shared to ABC.

You wait for the day your baby is going to be born and you take them home right away. And when that doesn’t become a reality and they have to stay in the hospital for a long time, you miss those little moments,’ Julie said.

‘Just being able to change Sienna and dress her brings a little normalcy and fun to the day,’ she added. 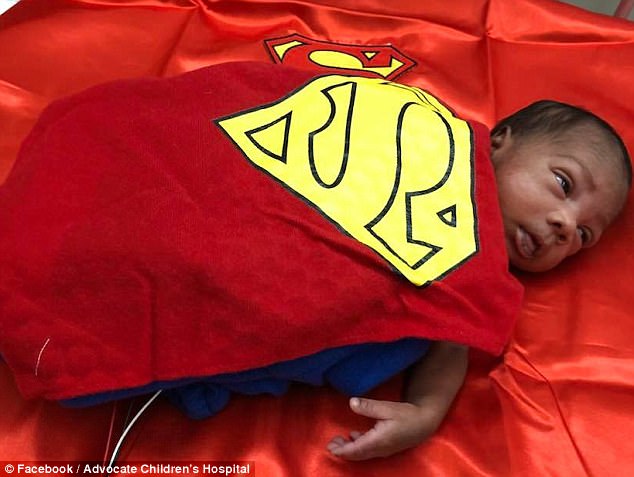 We have a winner! Superman Wesley is leading the competition with 8,000 likes on Facebook 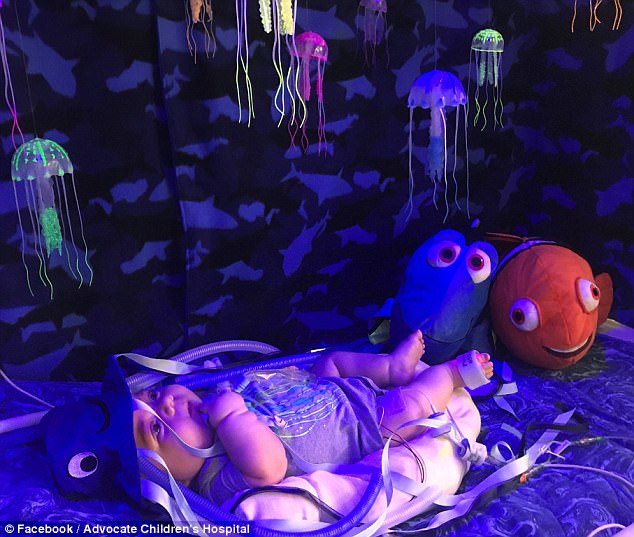 Just keep swimming: Miles, dressed as a jellyfish, is in second place with 6,600 likes, for his glow in the dark underwater paradise complete with Dory and Nemo toys 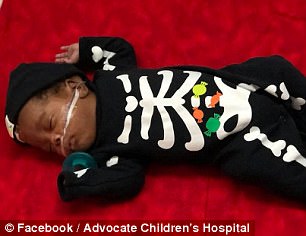 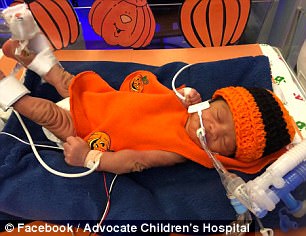 What a fright! More classic Halloween costumes included babies as skeletons and pumpkins 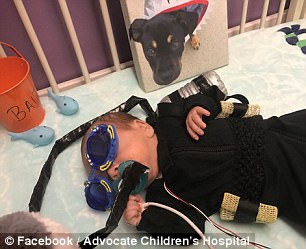 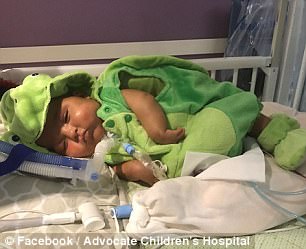 Little dreamers! Caleb was dressed into a shark diver with his crib as his cage while Brian enjoyed a snooze in his turtle shell costume 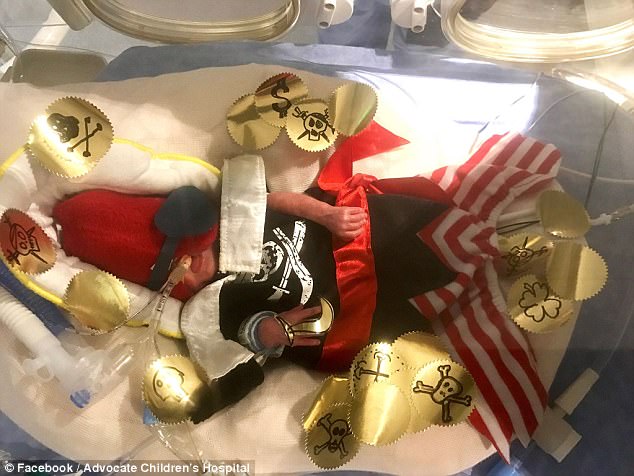 Ay matey! Mason played it cool, lying among his pirate’s gold, sneaking in some shut eye under his eye path, with a paper sword in hand 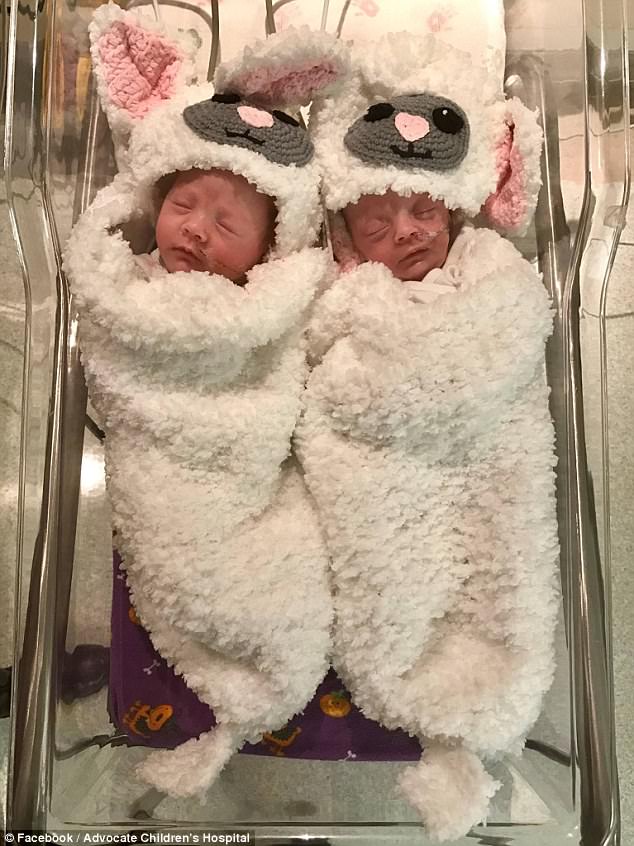 Aww! Twins Charlotte and Emily were soft treats for Halloween dressed as a pair of ewe’s

Parents Shelley and Rob Paz decided to deck out their one-week-old daughter Adaline as this year’s hottest superhero Wonder Woman.

The baby came seven weeks early for the Orland Park parents, but for them she’s their hero. They even decked out her incubator with Wonder Woman’s phrase ‘Only love can truly save the world’.

‘She’s our little Wonder Woman. She’s our superhero. She still has a long road ahead,’ dad Rob said to ABC.

The costume dress-up for the parents and baby was an eye-opening experience.

‘It was emotional to see her in the costume since it’s the first time ever seeing her in clothes, and you really see how tiny she is,’ mom Shelley Paz added.

While parents were filing in to transform their children’s units into Superman spreads, pumpkin patches, pirate booty, and boxing arenas, one family decided to create a joint costume and dressed up as the Adams family with their tots.

The photos online have won the hearts of thousands, with some favorites racking up over 5,000 like ‘votes’ for the heart-melting festive images.

So far the leaders in the race include Wesley in his red Superman cape and little Miles in his glow in the dark Finding Nemo set up. 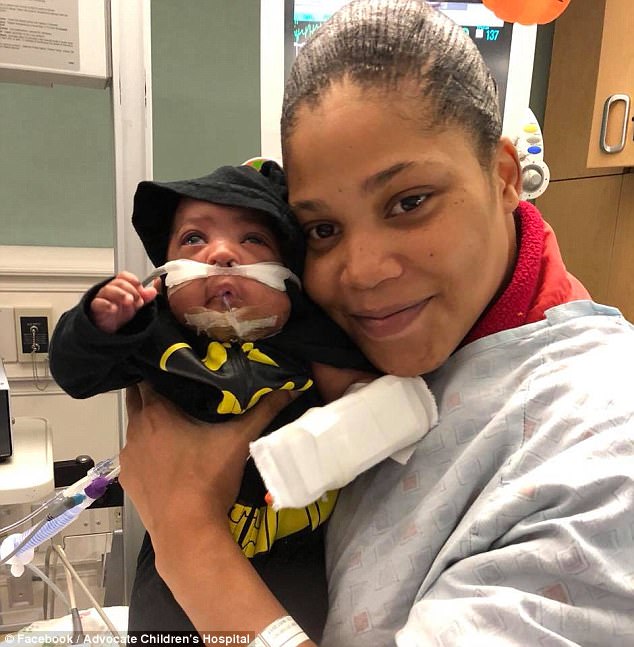 The cute night! Batman smiled for a snap with mom dressed in his superhero costume 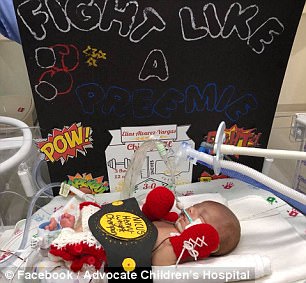 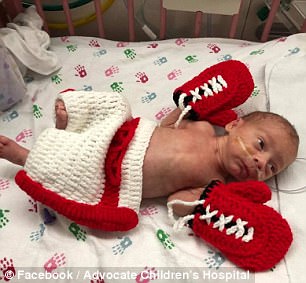 Throwing hands! These red-mittened fighters showed off their stuff transforming their cribs into arenas. One even had a poster that read ‘Fight like a preemie’ 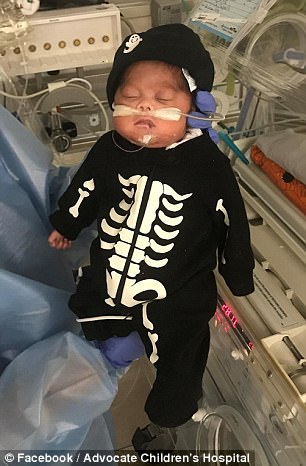 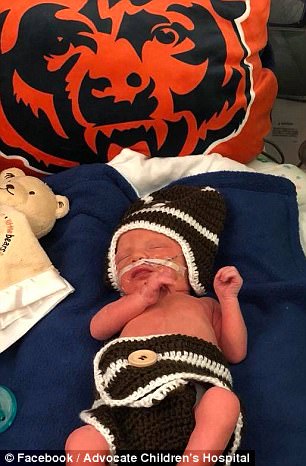 Snoozing through the fun! Robert (left) and Michael (right) slept while their parents photographed their adorable costumes as a skeleton and a Chicago bears fan 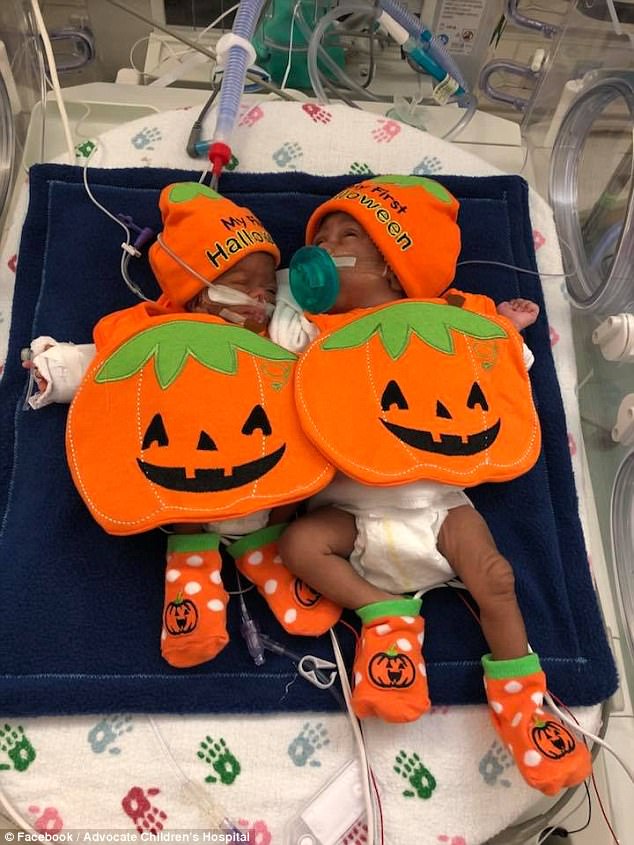 A perfect pair! Twins Kameron and Kaleb dressed as matching smiling pumpkins with hats that read ‘My first Halloween’ with matching socks 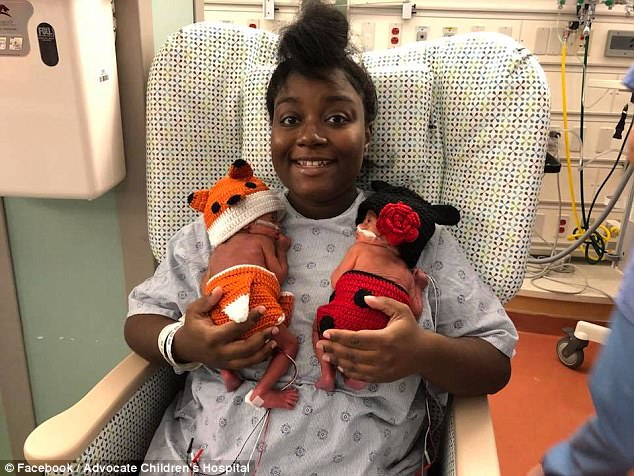 Twice as nice! This mom smiled with her babies Zachariah and Zion who were dressed as a ladybug and fox with hats and diaper bottoms