Just a day before he gunned down his ex-fiancee in front of the hospital where she worked, Juan Lopez stood by her side in church.

Lopez attended church services on Sunday with Dr Tamara O’Neal and her family in Indiana, where she was originally from.

Barely 24 hours later, O’Neal would be Lopez’s first victim in a hospital rampage that would also take the lives of a 28-year-old rookie cop and a 25-year-old pharmacy resident.

Lopez’s rampage only came to an end after a SWAT team officer’s bullet struck him in the abdomen and killed him.

Just a day before he gunned down his ex-fiancee Dr Tamara O’Neal in front of the hospital where she worked, Juan Lopez stood by her side in church 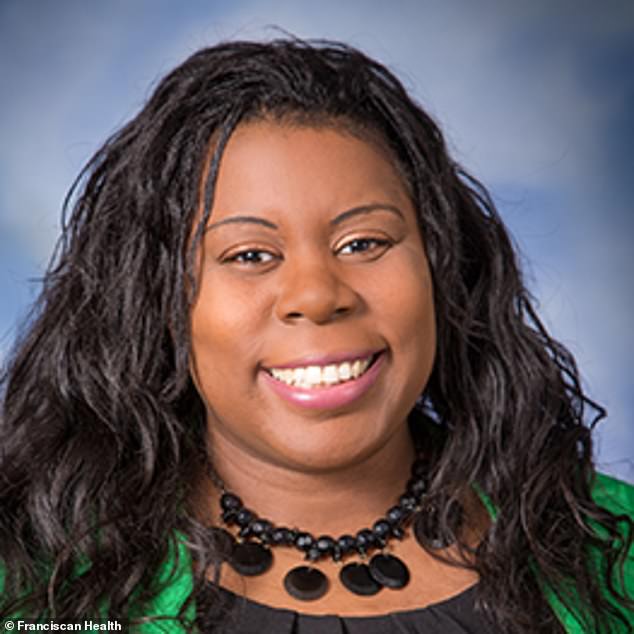 Barely 24 hours later, O’Neal would be Lopez’s first victim in a hospital rampage that would also take the lives of a 28-year-old rookie cop and a 25-year-old pharmacy resident

O’Neal and Lopez were engaged until late September, when the ER doctor decided to call off their October wedding.

Tom O’Neal, her father, told CNN that Lopez ‘couldn’t accept’ that the relationship was over.

O’Neal, a Christian, was very involved with her church. Tom said she and Lopez were ‘not united in their faith’.

‘I just thank God for the 38 years we had with her,’ he said. ‘I was thinking we’d have a lot longer. We were expecting being grandparents, spoiling the grandchildren.’

Details of Lopez’s troubled past are emerging in the aftermath of the shooting.

On Monday it was revealed that Lopez was kicked out of the Chicago Fire Department Academy in May 2014.

Lopez made threats to a female fire cadet and was told he was going to be disciplined, according to department spokesman Larry Merritt. 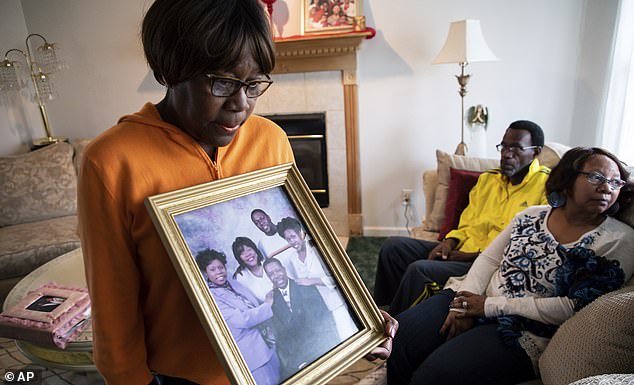 Glenda O’Neal shows a photo of her daughter and their family at their home in LaPorte, Indiana. Lopez had gone to church with O’Neal and her family in Indiana on Sunday 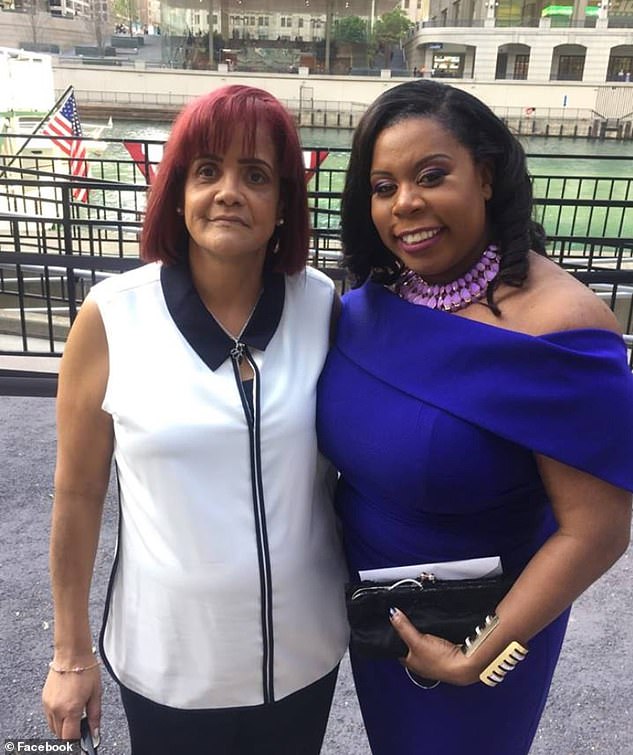 O’Neal and Lopez were due to marry on October 27, but she called the wedding off in September. O’Neal is pictured here with Lopez’s mother, who caption the photo ‘my future daughter-in-law’ 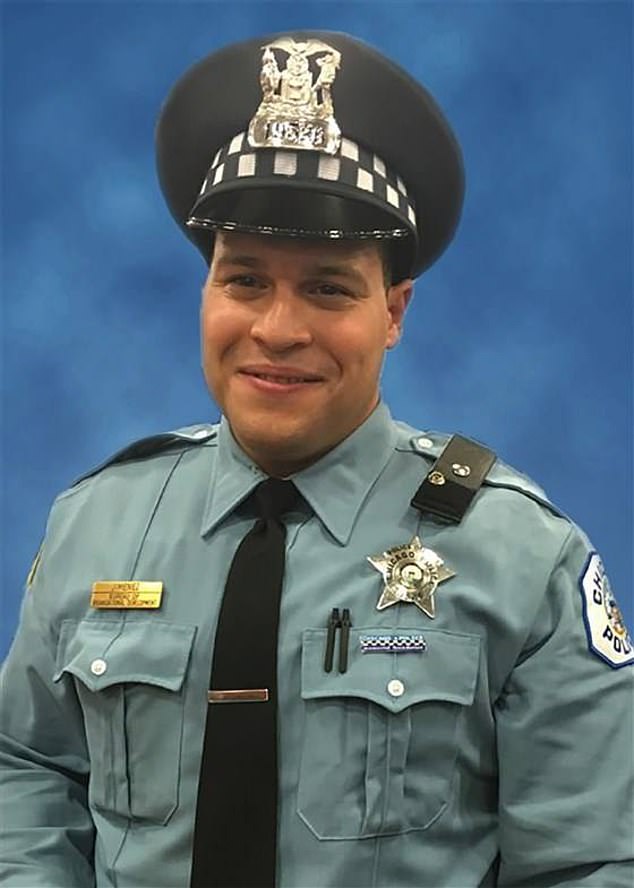 Lopez also killed Chicago police officer Samuel Jimenez, 28, (pictured). Jimenez had only just completed his probationary period. He was a father of three 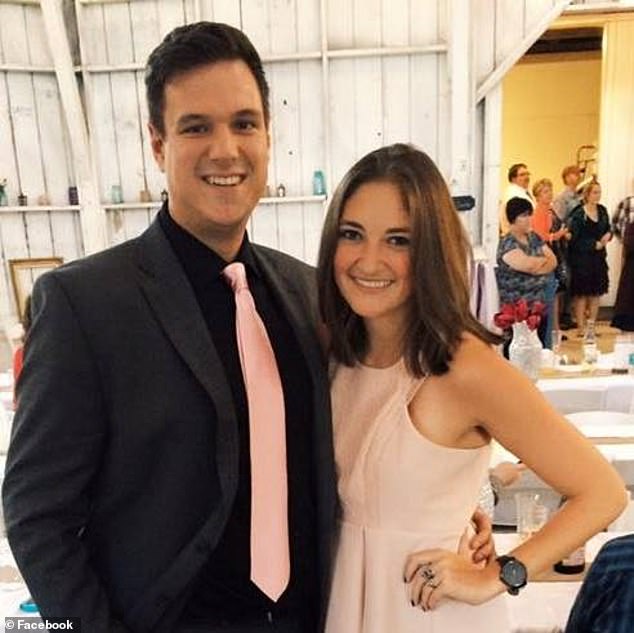 Dayna Less, 25, (pictured) was also killed in the shooting. She was a first-year pharmacy resident at Mercy Hospital who was engaged to be married

Sources told the Chicago Tribune that he then threatened to shoot up the fire academy.

Merritt did not have any details of the past threats but said they were made the same year a woman sought an order of protection against Lopez because he was incessantly texting her.

Police said they have not determined if the woman was granted an order of protection and Lopez was not criminally charged.

Lopez disappeared from duty during the ‘discipline process’ and did not report back to the academy. He was fired less than two months after he was hired.

Monday’s rampage began when Lopez left his job at the Chicago Housing Authority to confront O’Neal in the parking lot about an engagement ring, witnesses said. 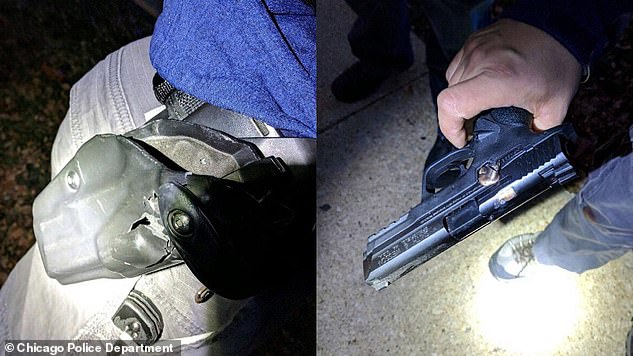 Lopez also shot at a second police officer, but the bullet struck his holster and embedded into the gun (pictured). He was not injured

After shooting the doctor six times, he then ran into the hospital and continued firing.

He shot at a second police officer who escaped injury when the bullet lodged in the barrel of his handgun while it was holstered on his belt.

Lopez had a permit to possess a concealed firearm, but it was unclear if officials knew about the 2014 complaint when the permit was granted, Chicago Police spokesman Anthony Guglielmi said.

Witnesses said the shooting began around 3.30pm when Lopez confronted Dr O’Neal in the parking lot. 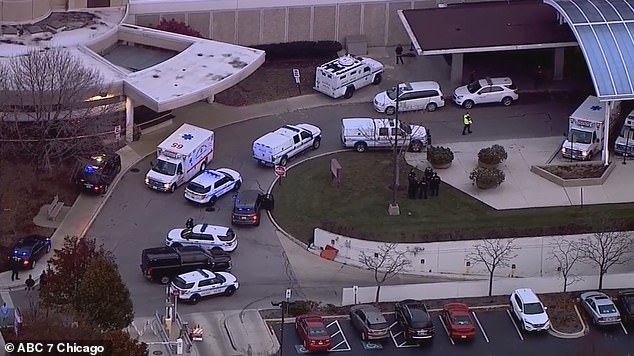 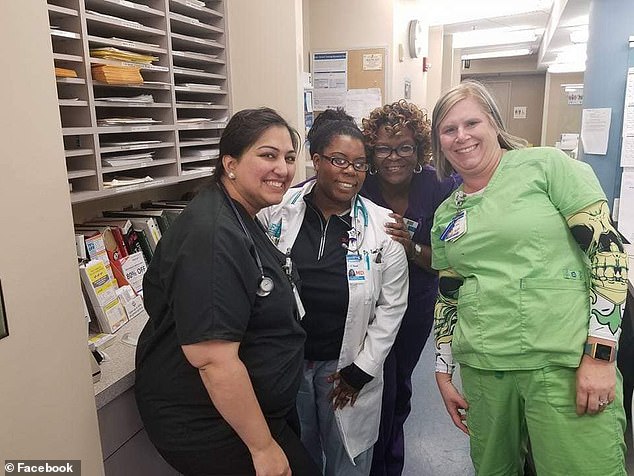 Dr O’Neal, an ER doctor at the hospital, was reporting for work when she was confronted by Lopez just before 3.30pm 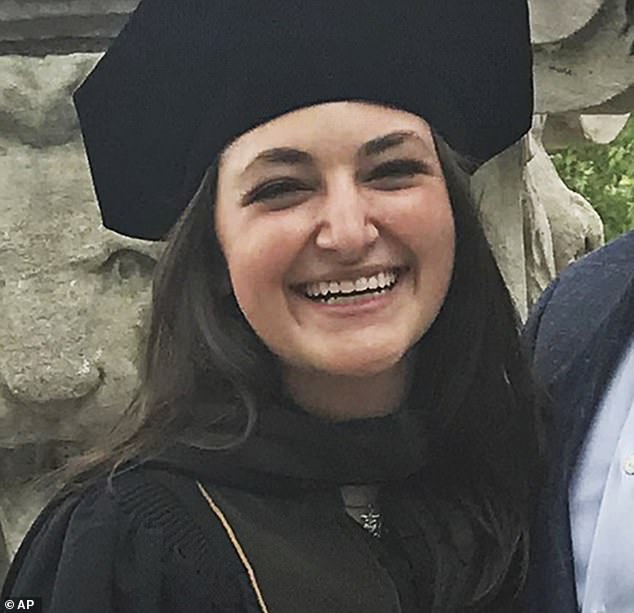 She was wearing her medical scrubs and was about to start her shift at the hospital.

A witness who was sitting in a van with nursing home patients in the parking lot said O’Neal had run to them for help.

‘She got on the phone and she was trying to call the police,’ the witness told WGN. ‘She asked us not to leave her alone because he is going to kill her.’

The witness said Lopez then approached O’Neal and demanded that she give him a ring. O’Neal told him that she didn’t have it. Then, he pulled out a gun.

James Gray saw Lopez and O’Neal talking to one another in the parking lot when he suddenly pulled out the gun. 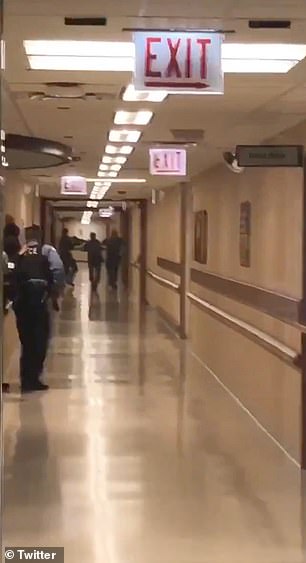 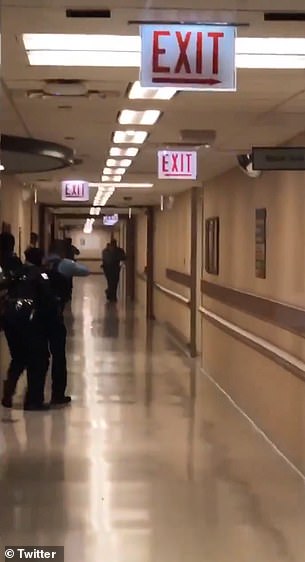 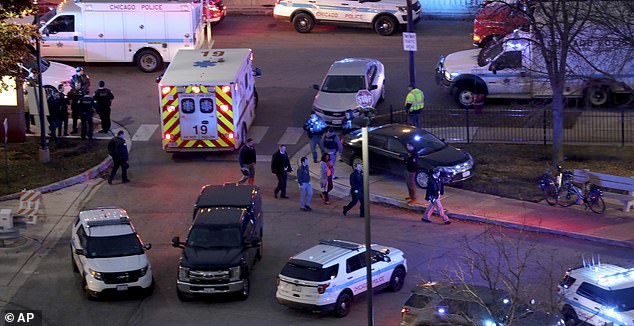 Lopez, 32, died inside the hospital after he was reportedly shot by a SWAT team officer

‘The gentleman turned around and shot three times in the chest,’ Gray told WLS.

‘Once she fell to the ground, he turned around and shot her three more times’.

Lopez then made his way into the hospital and shot Less multiple times just as she was getting off an elevator.

‘That poor woman got off an elevator,’ Chicago Police Superintendent Eddie Johnson said during a press conference. ‘She had nothing to do with nothing, and he shot her. Why?’

Lopez then fatally shot Jimenez in the neck. The rookie cop was a married father-of-three who had only just completed his probationary period. 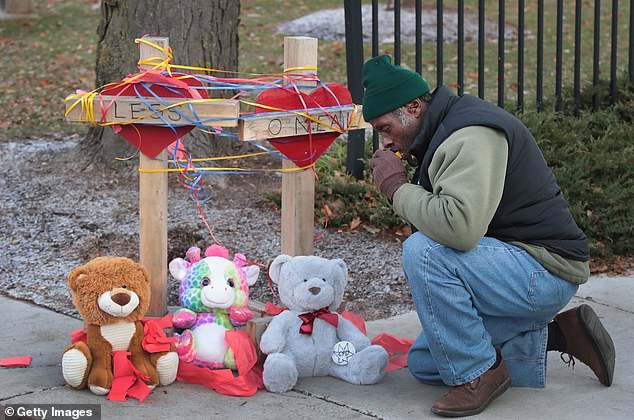 Ziff Sistrunk, of Crosses for the Losses, places crosses outside of Mercy Hospital for the victims of Lopez’s hospital rampage 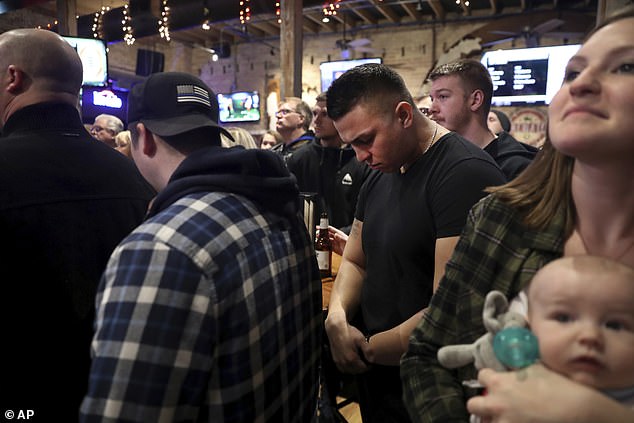 Johnson paid tribute to the slain officer late Monday, calling him and the other responding officers ‘heroes’.

‘They saved a lot of lives because we just don’t know how much damage he was prepared to do,’ he said.

Mayor Rahm Emanuel, fighting back tears, said the victims were ‘all going about their day, all doing what they loved.’

‘This just tears at the soul of our city,’ he added. ‘It is the face and a consequence of evil.’ 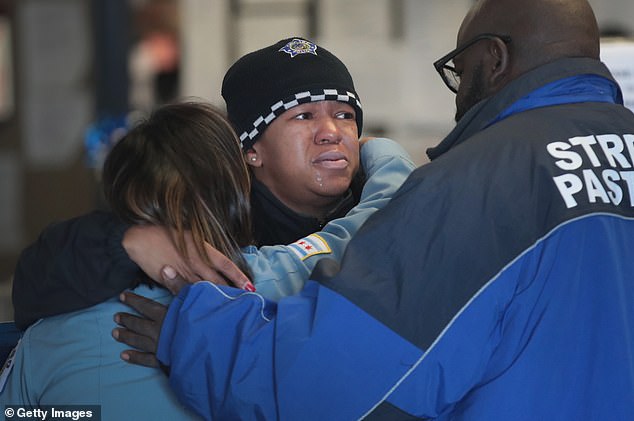 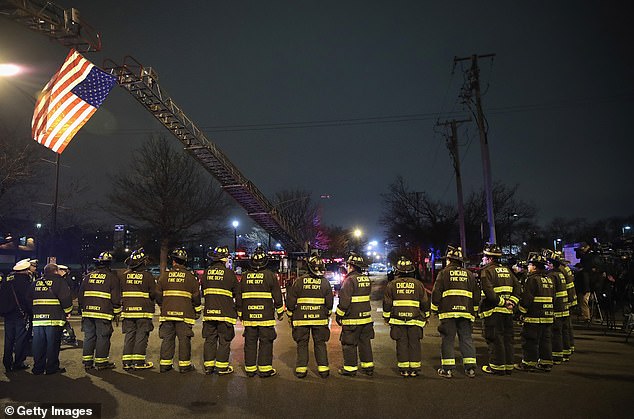