Hospital worker gets her bike back after seeing it on eBay

A hospital worker turned into a detective when police did not have time to investigate a thief caught on film stealing her £300 mountain bike.

She not only found the bike after it was advertised on eBay, but duped the seller into letting her ride it away.

The woman, who asked not to be named through fear of reprisal, works at the Manchester Royal Infirmary. The theft was captured on CCTV.

The unnamed woman tracked down her stolen bike on eBay and went to get it back. She asked to try out the bike and left the seller with a bag containing only old bus tickets

Despite telling Greater Manchester Police of the footage, she said officers considered it to be a ‘petty crime’ and wasn’t investigated.

The woman said: ‘The police said “nothing can be done, we’re understaffed”.’

She then spent several days searching for her bike on eBay and Gumtree and found it advertised five days later.

It is not known if the seller of the bike also stole it.

The woman contacted police telling them she’d found the bicycle.

‘They said ‘we can ring them, but they then usually vanish into thin air’,’ she added.

‘I told them that if they wouldn’t go round and get it, I’d do it myself.’

Police recommended she did not go to the advertiser’s house as she could put herself in danger.

But determined to get her bike back, she arranged to go and see the bicycle.

She went with her husband, his brother and three friends for security. 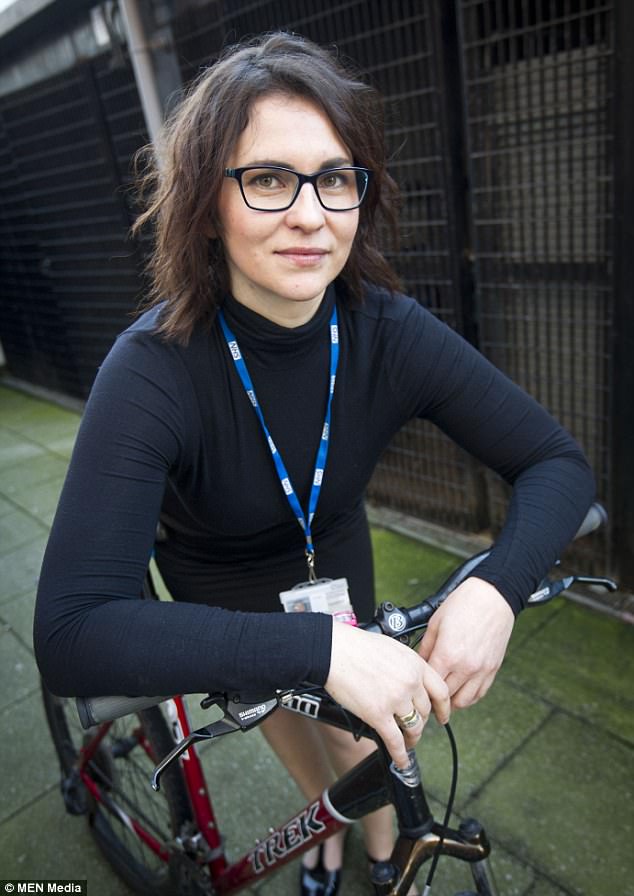 After spotting her bike being stolen in CCTV footage the victim told the police, who she says told her: ‘Nothing can be done, we’re understaffed’

They watched on from down the street as the woman knocked on the door and spoke to the vendor.

She offered him £70 cash before asking if she could have a test ride.

The woman asked him to hold her bag – containing just used bus tickets – and then set off down the road.

She used one of the cars to block the seller’s view before cycling out of sight.

Once she had the bike back home, she called the police to inform them – and officers congratulated her.

The victim has been robbed six times in 14 years.

Her BMW F650 motorbike has been stolen twice from her home in Manchester.

Police recovered the motorcycle both times after the woman tracked it down.

‘I did what I did as a matter of principle,’ the woman added.

‘It is like a military rule for me. For some people it’s just a bicycle, but it’s my bicycle.’

She described the bike seller as around 20, Asian, ‘chubby’, around 5ft 8 with a shaved head.

She added: ‘He looked innocent, like he wouldn’t be involved with crime at all. He was very polite.’

A GMP spokeswoman added: ‘At 5.35pm on January 19, police received a report of the theft a bicycle.

‘Solving crime takes time and we allocate resources to investigate as soon as we possibly can.

‘Each incident reported to us is dealt with based on the threat, harm and risk it poses and is prioritised appropriately.

‘Officers will be reviewing the incident and making contact with the victim in due course.’