Hospitals may be trying to ‘game the system’ to make A&E waiting times look shorter by moving patients to different departments, an investigation has found.

The NHS has for years repeatedly failed to meet its own standard of treating or discharging nine out of 10 A&E patients within four hours.

Health bosses recently confirmed that the target is being scrapped because many hospitals are unable to meet it.

And now there are claims hospitals are changing the way they record patient arrivals in a bid to shift the numbers in their favour.

By moving A&E patients to new emergency day care units – which aren’t included in the four-hour target – hospitals can keep them under the radar.

Accident and emergency departments in England are moving their patients to day care units to try and cut them out of the four-hour waiting time targets, an investigation has claimed (stock image)

A member of emergency staff at the University Hospital Southampton NHS Trust told the Health Service Journal they were doing it at their hospitals.

The whistleblower said: ‘We have rebadged an area in A&E and made it a clock stopping area.

‘There is no change in the environment or standard of care. Simply changing the name.

‘Nothing will change about who sees these patients or where, they just won’t be counted as breaches.

‘Our worry is patients will be made to wait over those that are counted.’

The move is made possible by a scheme to introduce the emergency day units in all NHS hospitals by September this year, the HSJ reported.

These units will be used to treat patients who need urgent care likely to last for a number of hours – such as scans or observation – but don’t need an inpatient bed.

An estimated 20 to 30 per cent of A&E patients could be sent to these units which will, it’s hoped, relieve pressure on buckling emergency departments and wards.

However, hospitals are believed to be starting to just shift significant numbers of patients into the departments – called SDECs – to get them out of A&E so they can make their performance look better on paper. 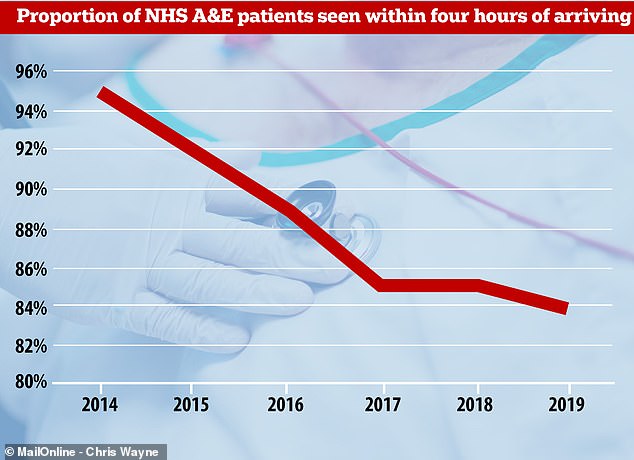 It would also save the trusts money because they’re fined every time a patient is made to wait longer than four hours for medical help.

NHS England has begun the process of scrapping the four-hour maximum A&E wait target to replace it with new ones.

In place of its infamous four-hour target, the NHS is now trialling seeing the most seriously ill patients – strokes and heart attacks, for example – within one hour.

Those with less serious conditions, meanwhile, will have to wait longer, and new targets will be drawn up after pilots at around a dozen hospitals.

Having failed to hit the four-hour benchmark for nearly four years in a row – it was last met in July 2015 – the NHS is now rewriting its own goals.

‘Now is the right time to look again at the old targets,’ the NHS’s medical director said in March.

This is despite past warnings from emergency medicine experts that scrapping the target could put patient safety at risk.

In January, Dr Taj Hassan, president of the Royal College of Emergency Medicine (RCEM) said: ‘Scrapping the four-hour target will have a near-catastrophic impact on patient safety in many emergency departments that are already struggling to deliver safe patient care in a wider system that is failing badly.’

Removing the target could wipe the NHS’s slate clean in one respect, making A&E data for the past 15 years difficult to compare with how hospitals perform in future.

And one branch of the health service, NHS Providers, has already admitted it may look like bosses are ‘moving the goalposts’.

‘But what is happening in reality is [some] trusts are just rebranding part of their emergency department as an SDEC unit and saying: “These patients no longer count in the four-hour data”.

‘But there’s no actual change in clinical practice – it’s just an exercise designed to game the system.

‘The patients in the SDEC just end up waiting longer, but are no longer on the four-hour clock.’

A&E waiting times hit their worst ever low in January this year, with just 84.4 per cent of people being seen within four hours of arriving.

This was significantly below the 95 per cent target, which the NHS as a whole hasn’t met since July 2015.

As a result, the health service is now rewriting its goals and is in the middle of trial to scrap the four-hour target in favour of an average time measure.

This will remove the benchmark but, the NHS claims, will stop more seriously ill people having to wait for less urgent patients to be treated so staff can get them out in time.

But experts have railed against the moving of the goalposts.

Dr Taj Hassan, president of the Royal College of Emergency Medicine said in January: ‘Scrapping the four-hour target will have a near-catastrophic impact on patient safety in many emergency departments that are already struggling to deliver safe patient care in a wider system that is failing badly.’

Sources told the HSJ that it had been told a number of hospitals were already using day care units to improve their waiting times, but there are no official data.

And staff said it made them anxious because the way patients were being treated was the same in both departments.

But the attempts, another anonymous NHS doctor said, were an inevitable consequence of hospitals being forced to reduce their waiting times on paper.

Dr Caroline Marshall, chief operating officer at University Hospital Southampton NHS Foundation Trust, said in a statement: ‘The concerns outlined by staff to the HSJ were raised by staff directly to senior management last week through appropriate channels and have already been addressed.

‘Our aim is to ensure all patients in our emergency department receive the right clinical care in a timely manner and we have been working closely with NHS Improvement on how we can improve our processes to manage the increasing numbers of patients we are seeing.

‘Some patients require more than four hours to complete their assessment and treatment but do not require a hospital admission and we are trying to identify that group of patients.

‘This involves trialling measures to improve the flow of patients through the emergency department, including expanding the use of same day emergency care practices where it is appropriate to do so.’