A hospital’s catalogue of mistakes led to the death of a six-year-old girl from sepsis just days after doctors assured her family she was healthy, it has emerged.

Coco Bradford was admitted to the Royal Cornwall Hospital on July 25, 2017 and later became increasingly unwell due to a ‘series of failures in care’.

She became increasingly dehydrated, and due to ‘missed opportunities’ in treatment died of Sepsis on July 31, 2017.

Her family met on Friday to hear an independent report into the death, which found the hospital ‘was not good enough’ in its treatment.

Coco Bradford (pictured), six, died from sepsis at the Royal Cornwall Hospital on July 31, 2017 just days after doctors assured her family she was healthy 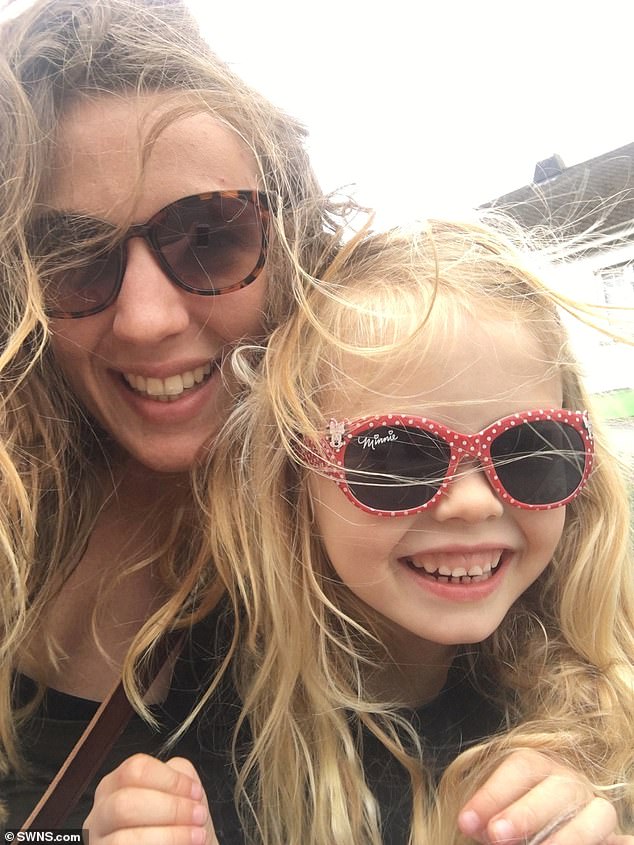 Rachel Bradford (pictured with her daughter Coco Bradford) said she was ‘appalled by the level and magnitude of failings’ at the hospital. She was speaking following an independent report into the death of her daughter conducted by Royal Cornwall Hospitals NHS Trust

Speaking at the meeting, Coco’s mother Rachel said: ‘After reading the final report into Coco’s death in full, which has been extremely distressing and actually a further burden to bear, I am appalled by the level and magnitude of failings from the moment Coco entered the hospital.

‘Our beautiful, little girl did not stand a chance. In July last year, Coco was living her best life ever. She was happy and healthy and absolutely loving life.

‘Then Coco became ill and, due to the multiple failings by certain members of staff in this hospital, she died eight days later and she never got to live the life she so deserves.’

Members of the board of Royal Cornwall Hospitals NHS Trust (RCHT) met on Friday to accept an independent report into the death of Coco, who is from St Ives, Cornwall.

They faced damning statements from Coco’s family, who described how they were treated with arrogance by staff on Polkerris Ward. 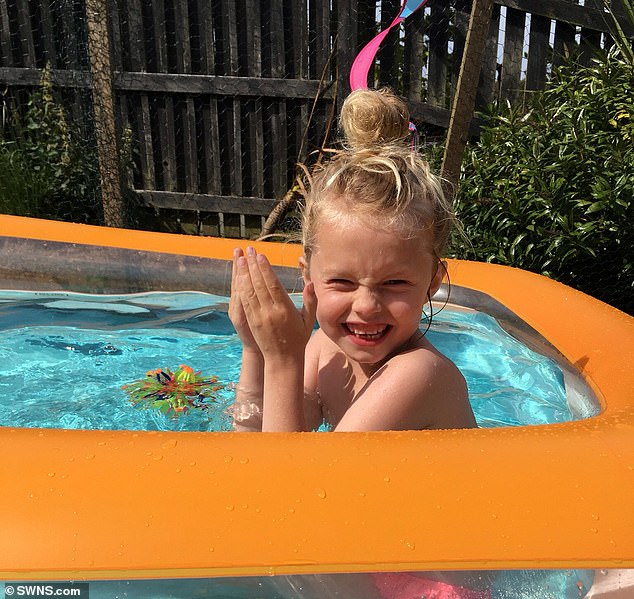 Coco (pictured) has been described by her mother as ‘an inspiration to others’ by her mother Rachel. She said at a meeting on Friday that Coco ‘would definitely have grown up to be a world changer’

Luke and Rachel Bradford described how staff failed to listen to them as their daughter lay dying.

Medics assured the family in July 2017 that Coco, who was autistic, was okay, days before she died from sepsis.

The report, which included 13 recommendations to change procedures at the hospital, said mistakes had been made in diagnosis and there was a delay in treating Coco.

It concluded: ‘There were numerous missed opportunities which we believe would have significantly increased her chances of survival.’

Attending the meeting in Truro, were both of Coco’s parents, Luke and Rachel, and sisters Chelsea Elcocks and Bianca Ackroyd. 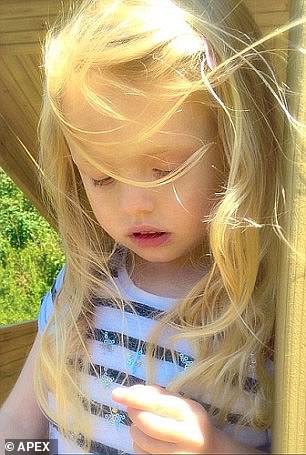 Rachel Bradford said the death of her daughter Coco (pictured) had ‘broken [her] mentally, physically and emotionally’ and that it had had a ‘devastating effect’ on the family as a whole

The room was shown a video of Coco and board members were visibly upset and moved by the poignant images.

Addressing the board, Rachel said: ‘Coco was an inspiration to others, a life changer, and she would definitely have grown up to be a world changer. She amazed us every single day.

‘I cannot and will not ever forgive those individuals we hold responsible for Coco’s death. They know who they are and they should be utterly ashamed of themselves.

‘To then, later, find out that they blamed Coco, her autism and from being uncooperative and non-compliant to excuse their own incompetence is unforgivable.

‘For the record Coco was neither uncooperative or non-compliant.

‘I am extremely angry regarding the questionable honesty of some clinicians and their failure to recall information even though it was documented.

‘We questioned their actions constantly, begged for pain relief for Coco and Chelsea (Coco’s sister and a clinical skills tutor who has worked in ICU for over two years) questioned them directly by phone.

‘They treated us with indignance and arrogance and told us they were not worried about Coco and she was fine, but actually she wasn’t.

‘She was dying in front of our eyes.’ 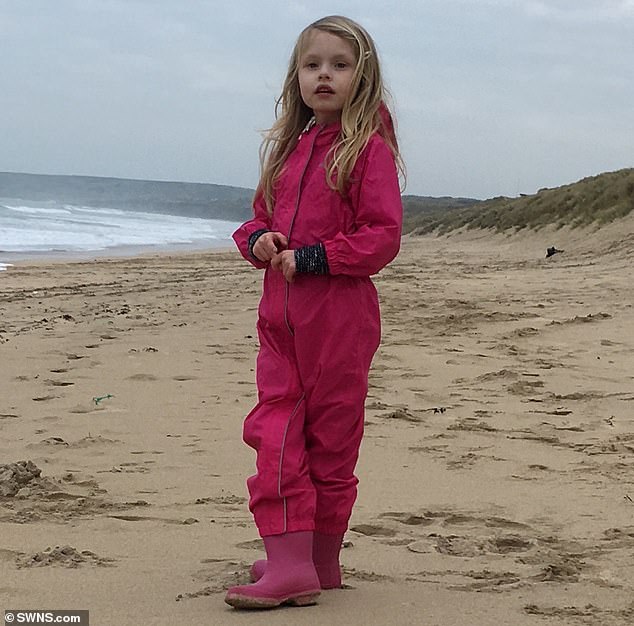 Rachel described her daughter Coco (pictured) as someone who loved the beach, swimming, eating chocolate and listening to music ‘all the time’ especially Justin Bieber and Little Mix

Sarah went on to explain how when ‘faced with a severely dehydrated child with diarrhoea and vomiting’, doctors decided not to follow guidelines.

She added: ‘when a clinician who agrees a plan for a dying child does not implement that plan or transfer to another hospital, and when a paediatric consultant does not recall, can’t remember, wasn’t aware of and cannot explain a course of action or procedures, it would seem acceptable to question the suitability of their chosen professions.’

‘Coco’s death has had a devastating effect on us all.

‘She was absolutely the most precious person in our family and, for me, she was and continues to be the absolute love of my life.

‘I cannot come to terms with her death and it has broken me mentally, physically and emotionally.

‘I simply cannot put into words how losing Coco has made me feel.

‘I spent nearly every day with her for six and half years, loving her, caring for her, protecting her and fighting for her. She meant and still means the world to me.

‘When you take your child into hospital you have to put your trust in the hands of the medical professionals if you, yourself, are not medically trained.

‘You have to believe they are doing the best for your child. You really don’t have a choice.

‘This report is not a full account of what really happened and what was actually said, as it would be classed as circumstantial or hearsay, but it most definitely confirms our worst fears and concerns from last July and that is very difficult to live with, especially when you know all that Coco needed was rehydration.

‘The failure of treating that initial infection led to Coco contracting sepsis, which is what she actually died of.’ 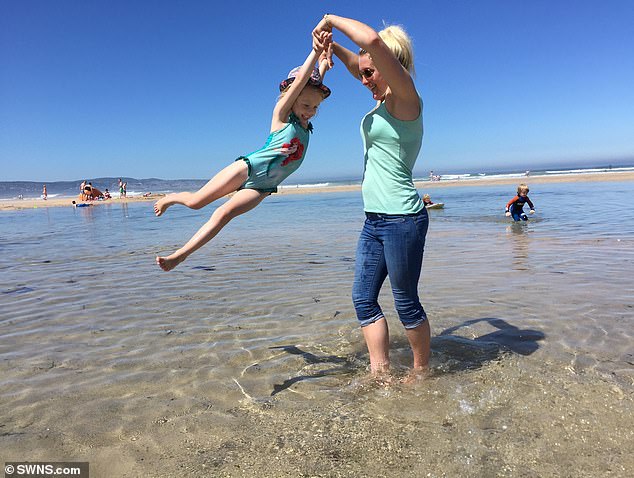 Coco pictured with her sister Biancia Bradford. Another of Coco’s sisters, Chelsea, said Coco, known by her nickname Coco-bean, was an adorable six year old girl

Her death comes just one year after Coco managed to speak to her parents for the first time in three years.

The inspirational girl had begun speaking at the age of two – only to cease completely.

But three years later her silence ended when, out of the blue, she asked her astonished parents for ‘more toast please’.

Like many children with autism, Coco’s language skills were delayed and she struggled to communicate.

But she overcame those difficulties in a ‘really magical moment’ for her mother and father. 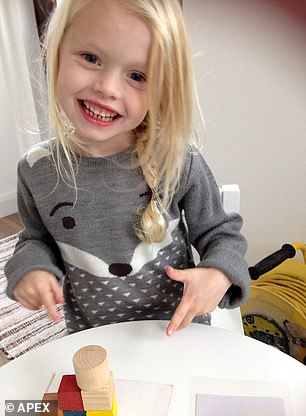 Coco spoke for the first time in three years in 2016 when she asked her parents for some ‘more toast please’. She was diagnosed with autism and struggled in developing her speech

Speaking at the time, Rachel said: ‘Her exact words were ‘I want more toast please’. She just kept saying it and we were just like ‘oh my god’.’

Coco’s sister Chelsea was also at the hearing on Friday.

She said Coco, known by her nickname Coco-bean, was an adorable six year old girl.

She described her bedtime routine and explained how Coco, who, because, of her autism had been delayed in developing speech, would say ‘ruff you’ for ‘I love you’.

She said: ‘It’s Wednesday July 26, 2017, and I’m sat looking at the same beautiful bleached blonde six-year-old but this time she’s not well, so unwell she can barely lift her hand from the sofa where she lives.

‘I’ve already instructed my mum to call an ambulance and there is just time to say goodbye to little Coco-bean.

‘This time I say, ‘Look at you little Coco-bean. You’ll get better soon. I love you.’

‘She manages, somehow, to gather the strength to slightly lift her head and say, ‘Ruff you’. This is the last thing my beautiful little sister ever said to me.

‘Just two days later and now I’m questioning staff at Treliske (Royal Cornwall) hospital. I’m angry because what I am telling them is not getting through.

‘This is my expanded NHS family, people that, as a fellow healthcare professional, I should trust. I try, but they tell me they are not worried about this, no she doesn’t need that, and no we don’t use that system here.

‘Even more infuriating is when I find myself sat in a room 12 months later, with the medical director telling me you were right all along, your instinct was correct from the offset.

‘I am now furious that I allowed such incompetent healthcare professionals to create a smokescreen as to what was really happening, which is that no-one knew what the hell they were doing.’ 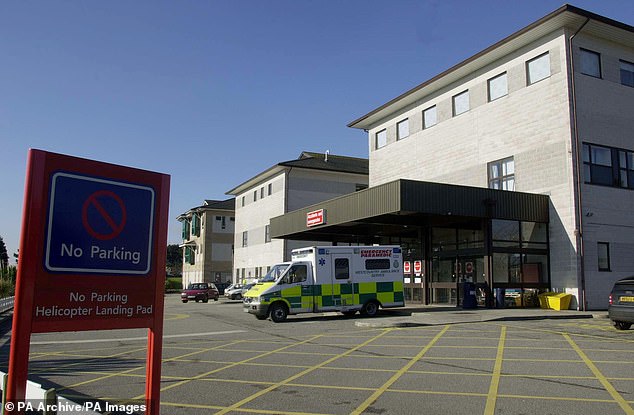 She added: ‘Treliske at first were in denial and dishonest to us. I can forgive that. What I cannot forgive is that everything I have told you today could have and should have been avoided.

‘My beautiful little sister could still be here today and we would never have had to stand here, falling apart, explaining how our lives have been impacted and are now ruined.

‘The countless missed opportunities by fellow NHS staff mean I will never hear my little sister laugh, giggle or say ‘I ruff you’ again.’

Chairing the meeting was RCHT non-executive director Sarah Pryce, who said to the family: ‘I know I speak for the whole board in saying we are so very sorry.’

She added: ‘None of us can possibly imagine what you have been through and continue to go through.

‘Today, you’ve given us some indication into how special and a beautiful girl Coco was and some sense of the impact of your loss.

‘It’s incredibly difficult to hear about your loss and pain but as a board we are pleased to listen to you.

‘To be honest, I am struggling to find words that are big enough to say sorry. We will learn from what happened to Coco.

‘I know that doesn’t make your loss any less painful.’

Kate Shields, the chief executive of RCHT, also read a statement in which she said: ‘We have today formally received an independent report into the care and treatment of Coco Rose Bradford.

‘We have fully accepted the report’s findings and will report our progress against every one of its recommendations publicly at our trust board.

‘Coco was a six-year-old little girl who was in our care on two occasions in July 2017.

‘The report describes a series of failures in care and missed opportunities to treat Coco at a time when her death could have been avoided and her symptoms treated.

‘We know that Coco’s family and, in particular Rachel, Luke, Chelsea and Bianca, have fought to get the full facts of the case.

‘We will continue to work with them to try to fully understand why we failed and to make sure that Coco’s legacy for all children in Cornwall is that this never happens again.

‘The whole hospital trust and our communities in Cornwall will be saddened when they read the report.

‘The care described is not read reflective of general care on our children’s wards.

‘We have sought, and will continue to seek, external scrutiny of our services so that local people can be confident that we are safe and effective in the care of children in Cornwall.

‘It is however vital that we accept and acknowledge the fact that for Coco and her family we were not good enough. We apologise unreservedly.’