By Kamal Sultan For Mailonline

This is the dramatic moment two men were injured after falling from an out-of-control hot air balloon in Austria.

Pilot Hansjorg Keller, 69, and one passenger were hurt after they crashed out of the balloon basket after a gust of wind caused a landing failure in Raggal, Vorarlberg.

An eyewitness filmed the incident outside his home when the hot air balloon flew up into the air again without a pilot. 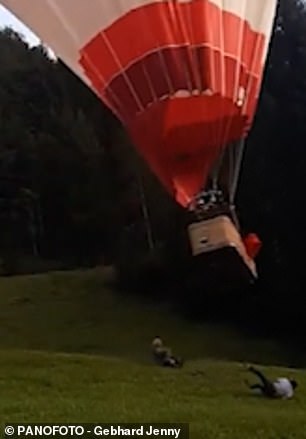 Pilot Hansjorg Keller, 69 and one passenger, 64, were injured after falling from a hot air balloon in Raggal, Vorarlberg, in Austria on August 26

The 69-year-old from Switzerland was returning from Grosses Walsertal with six Austrian passengers and wanted to land the balloon at around 8.15 pm on August 26.

On his attempt to land a gust of wind blew into the envelope of the hot air balloon and lifted the basket up off the ground before it landed again with extreme force.

The basket toppled over and the pilot and the passengers had fallen out but the 64-year-old man tried to hold on to it to stop it from flying away. 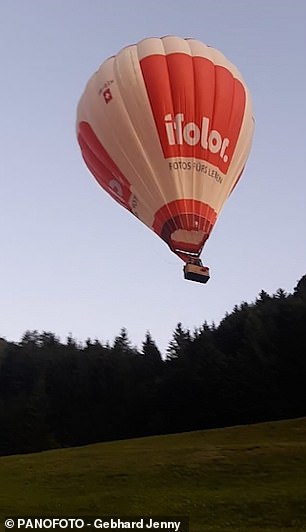 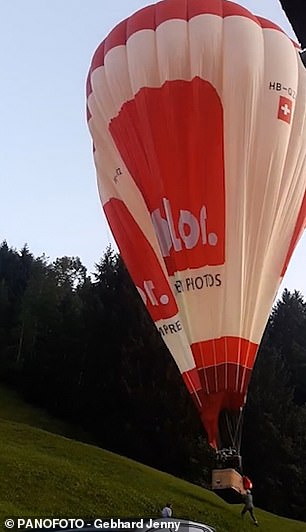 He was picked up and lifted a few metres into the air before he crashed back down onto the grass, while the pilot was dragged along the meadow as he didn’t let go of the ripcord in order to make the balloon descend.

It crashed back down again and the pilot this time stopped it from taking off.

According to the witness a fire brigade team of 20 men with two vehicles and a mountain rescue team arrived to help within 17 minutes of the incident.

Mr Keller suffered minor injuries and the 64-year-old man broke his arm and was admitted to the Landeskrankenhaus Feldkirch but the other passengers were not hurt.

According to the police, the weather conditions for the landing were normal.