This is the terrifying moment a hot air balloon caught fire mid-flight and forced a crash landing with all 15 passengers and the pilot escaping relatively unharmed.

The balloon lifted off over the Yarra Valley, in north-east Melbourne just after 5.30am on Wednesday morning.

Just after 6am flames engulfed its gas tank and the fire quickly grew more aggressive, The Herald Sun reported.

A person on camera is seen spraying down the flames with an extinguisher as the terrified passengers look on in horror.

The pilot was forced to land the hot air balloon in a paddock near Cahillton Road, Gruyere.

‘The pilot has been operating for over 30 years — he’s one of the most experienced pilots in Australia and I think that experience has really paid off today,’ he said.

Thanks to his lifelong experience, the veteran pilot was able to bring the balloon safely back to ground amid precarious conditions.

He even managed to evacuate the passengers and himself as the fire spread and fully engulfed the passenger basket.

Miraculously only a 27-year-old woman was taken to hospital for observation.

Senior Sergeant Mal McKern confirmed doctors were looking after the woman, though there were no serious injuries.

‘They’re all in good spirits — it’s probably a bit of an adventure,’ he said of the relatively uninjured passengers. 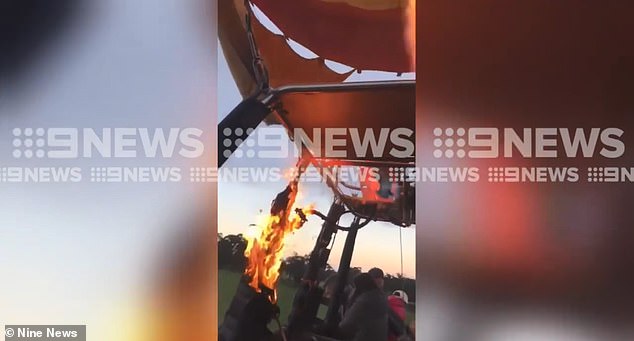 Sgt McKern said emergency services had first got the call-in at 6.15 am from one of the passengers.

By that time the balloon had landed in the paddock.

The Country Fire Authority were called to the scene at the time and six fire trucks were sent to the crash site.

An on-board fuel system is believed to be at the centre of the cause of the fire.

Three couples became engaged on the hot air balloon before it was caught it in a tree.

Then in February this year seven people were taken to hospital after a hot air balloon made an emergency landing in Dixons Creek, 45km north-east of Melbourne. 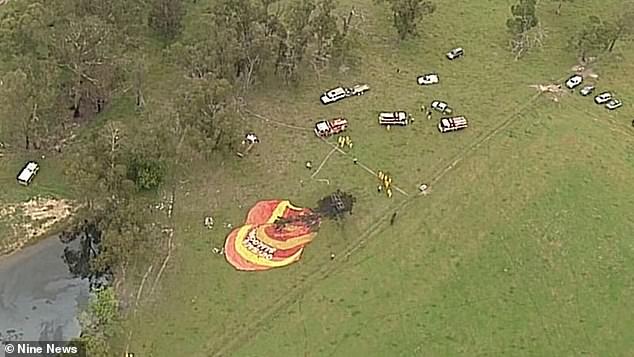 The pilot was forced to land the hot air balloon in a paddock near Cahillton Road, Gruyere (pictured)