A charity is baffled after a hotel cancelled its Christmas booking for 28 homeless people with no explanation or warning.

The Raise the Roof Homeless Project, in Hull, had booked 14 twin rooms at the Royal Hotel to accommodate 28 of the city’s homeless on Christmas Eve and Christmas Day.

But the charity was left feeling ‘gutted and angry’ by the hotel’s sudden decision to cancel the booking which cost £1,092. 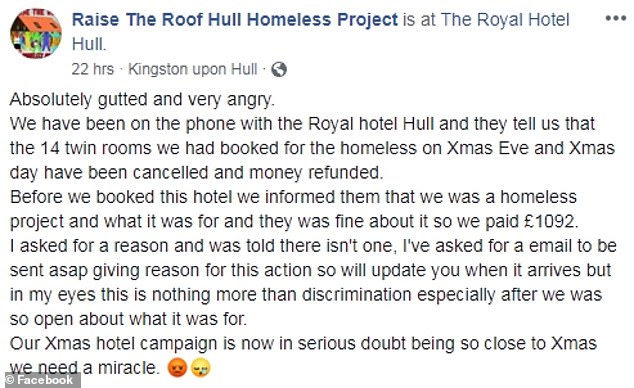 But The Royal Hotel cancelled the booking without explanation or warning according to the charity, which broke the news on its Facebook page

In a Facebook post the charity said: ‘Our Xmas hotel campaign is now in serious doubt being so close to Christmas. We need a miracle.’

Organiser Carl Simpson said he booked rooms for 28 people in the city centre hotel but, with only a week to go before Christmas, he has been told the bookings have now been cancelled.

Mr Simpson said he is waiting for an explanation because he was clear and open when he booked that the rooms would be used for the homeless.

He said: ‘I can’t think of anything else apart from discrimination. This is just kicking people at their lowest, while they’re down.’

Mr Simpson said: ‘They’ve left us in a real fix. We had already told people and it had given them a lot of hope. Now we’ve got to tell them it’s not going to happen.

‘Christmas is the lowest point of the year for the homeless, you see suicides increase. Last year we did not have any deaths in Hull.’ 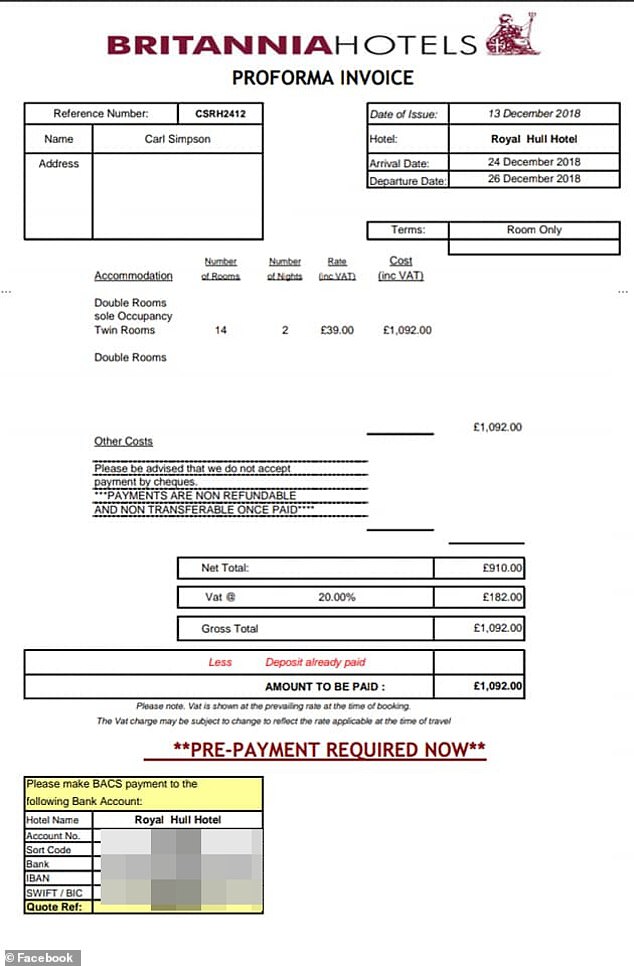 But the charity was left ‘gutted and angry’ by the hotel’s sudden decision to cancel the booking which cost it £1,092. The hotel’s invoice to the charity is pictured

Raise the Roof used the city’s Ibis hotel last year for its Christmas campaign, but the venue did not have enough twin rooms available this year to repeat the booking, cafe owner Mr Simpson said.

But he said there had been no reports of any trouble from the previous booking, adding: ‘We had guests asking staff for Hoovers to tidy up after (themselves).’

Mr Simpson said that he had paid the Royal Hotel, which is part of the Britannia Hotels group, £1,092 for 14 twin rooms on Christmas Eve and Christmas Day.

He is now concerned about the time it will take to receive the refund, and whether the number of rooms needed can still be found elsewhere at an affordable price.

Asked what he wanted to happen, Mr Simpson said: ‘If Britannia could change their minds or if another hotel could come forward.’

Many people hit out at the hotel in response to the post.

Donna Harmanm said: ‘Disgusting. The hotel should hang their heads in shame. I for one will be sending a strongly worded email and I urge everyone else reading this to do so too. I will boycott this hotel from now on.’

We received a booking for 14 twin rooms for 2 nights from 24 December.

A spokesman for Britannia Hotels Gail Sainthouse said: ‘The booking was under the name of Carl Simpson and was for 28 homeless people.

‘We received a call from a lady called Sarah who worked for the charity last year when they stayed at the Ibis Hotel. She had rung to warn us that the group had caused serious problems at the Ibis and that she felt we should not take the booking.

‘Among the issues last year were trashing of rooms, fires , theft of hotel goods and property and damage to property.

‘The hotel has a number of families and tours staying at the hotel over the Christmas period which we feel would suffer if the booking was taken.

‘We have, however contacted the charity to advise that we are willing to take the booking with conditions.’