House Republican say their investigation into the FBI’s handling of Hillary Clinton’s email server and the Trump campaign’s alleged Russian ties, which quietly wrapped up this week, uncovered concerns about its ‘impartiality’ – yet Democrats have blasted the probe as being little more than a distraction from Robert Mueller’s investigation.

Republicans have said since the election that they believe Justice officials were biased against President Trump when they started an investigation into his ties to Russia and cleared Clinton in a separate probe into her email use.

In a letter released Friday evening, less than a week before Republicans cede the House majority to Democrats, the chairmen of two House committees described what they said was the ‘seemingly disparate treatment’ between the two probes and  called on the Justice Department to appoint a special counsel to investigate further.

House Judiciary Chairman Robert Goodlatte and Rep. Trey Gowdy, House Oversight and Government Reform chairman, both of whom are retiring next week, sent a letter to the Justice Department and Senate Majority Leader Mitch McConnell saying they reviewed thousands of documents and conducted interviews that ‘revealed troubling facts which exacerbated our initial questions and concerns.’

But Democrats have blasted the GOP-led congressional probe, saying it was merely meant as a distraction from special counsel Robert Mueller’s Russia investigation.

California Rep. Adam Schiff, who does not sit on either panel but is the top Democrat on the House intelligence committee, tweeted Friday evening: ‘This is how the House Republican effort to undermine Mueller by ‘investigating the investigators’ ends. 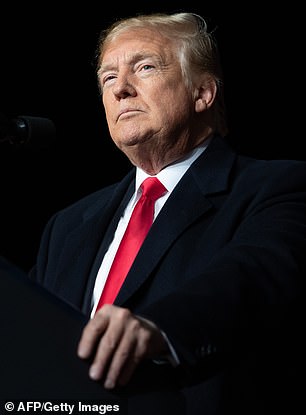 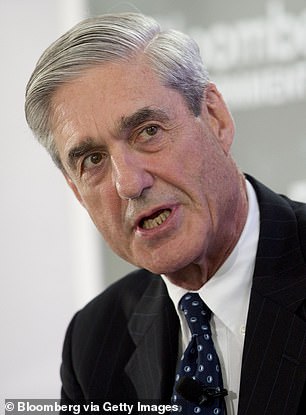 House Republican say their investigation into the FBI’s handling of Hillary Clinton’s email server and probe of the Trump campaign’s alleged Russian ties, which quietly wrapped up this week, uncovered concerns about its ‘impartiality’ yet Democrats have blasted the probe as being little more than a distraction from Robert Mueller’s investigation 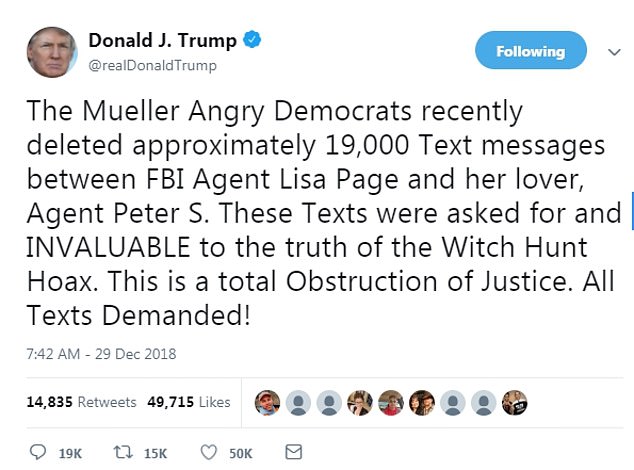 On Saturday, Trump appeared to take a swing at the Mueller investigation’s probe into the texts between and Page – many very critical of his presidency

‘Not with a bang, but with a Friday, buried-in-the-holidays whimper, and one foot out the door.

The GOP lawmakers insist the investigation was not an attempt to undercut special counsel Robert Mueller.

So far, the Republican House have only released the letter although they do plan to release transcripts of the 19 interviews that were conducted as part of the probe, including with former FBI Director James Comey, former Attorney General Loretta Lynch, and FBI official Peter Strzok and his lover Lisa Page.

On Saturday, Trump appeared to take a swing at the Mueller investigation’s probe into the texts between and Page – many very critical of his presidency.

‘These Texts were asked for and INVALUABLE to the truth of the Witch Hunt Hoax. This is a total Obstruction of Justice. All Texts Demanded!’

The investigation’s most public day was a 10-hour open hearing in July in which former FBI special agent Peter Strzok defended anti-Trump texts he sent to a colleague as he helped lead both investigations. Strzok fought with Republican lawmakers in a riveting spectacle that featured Strzok reading aloud from his sometimes-lewd texts, and Democrats and Republicans openly yelling at each other. 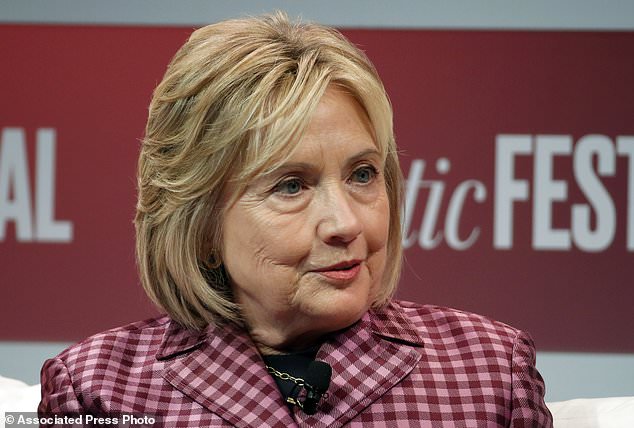 Republicans believe officials were biased against Trump when they started an investigation into his ties to Russia, and cleared Clinton of her email use 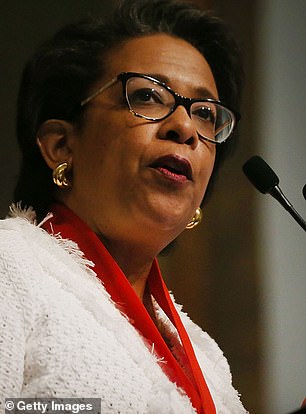 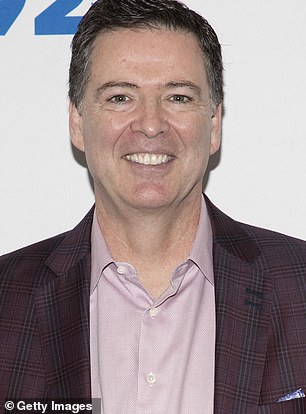 Goodlatte and Gowdy laid out several concerns in the letter, many of them echoing a report issued this year by the Justice Department’s internal watchdog.

That report concluded that Strzok’s anti-Trump text messages cast a cloud on the agency’s handling of the probe and also that fired FBI Director James Comey repeatedly broke from protocol, including when he announced his recommendation against charging Clinton. But unlike the congressional investigation, the report also found there was no evidence that Comey’s or the department’s final conclusions were motivated by political bias toward either candidate.

The Republicans have insisted that they were not trying to undermine the Mueller probe.

‘Contrary to Democrat and media claims, there has been no effort to discredit the work of the special counsel,’ Goodlatte and Gowdy wrote in the letter. ‘Quite the opposite, whatever product is produced by the special counsel must be trusted by Americans and that requires asking tough but fair questions about investigative techniques both employed and not employed.’

Republicans have repeatedly asked for a special counsel to look into the 2016 questions, but former Attorney General Jeff Sessions never granted their request. The department is now led by Acting Attorney General Matt Whitaker, a Trump ally who has not weighed in on the issue.

The Republicans sent the letter not only to McConnell but to several other Republican Senate committee chairmen, including South Carolina Sen. Lindsey Graham, who will become chairman of the Senate Judiciary Committee. Goodlatte and Gowdy wrote that ‘while Congress does not have the power to appoint a special counsel, Congress does have the power to continue to investigate. They said they believe ‘the facts uncovered thus far’ warrant continued oversight.

Goodlatte and Gowdy have also asked for the Justice Department release transcripts from their investigation. The committees sent the transcripts to the department last week so they could be reviewed for any classified information, but they have not been released.