New peers should only be appointed if two others have died or retired, according to a major report on shrinking the size of the House of Lords.

A review by the Lord Speaker said the size of the upper chamber must be cut by a quarter if it is to earn the public’s confidence.

This would mean that, for the first time, the size of the House would be capped at 600 – and all new peers would have to retire after 15 years.

New peers should only be appointed to the House of Lords if two others have either died or retired, a report outlined by the Lord Speaker Lord Fowler, pictured in the chamber yesterday 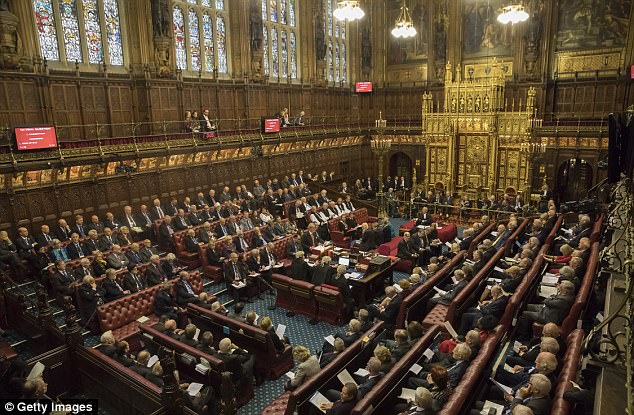 All new political peers would be appointed in proportion to the previous election result – meaning that the number of Liberal Democrat peers will gradually fall if their poor electoral fortunes continue.

The report calls for an accelerated ‘two-out, one-in’ retirement scheme to ensure the House falls to 600 members within a decade.

But the plan, outlined by Lord Fowler, the Lord Speaker, can only work if the Prime Minister and all political parties agree to limit their numbers. That would require about 50 Tories and 40 Labour peers voluntarily agreeing to retire by 2022.

And the plans would actually increase the power of privilege in the Lords because it says the number of hereditary peers should remain the same – increasing their proportion over time as the House shrinks.

Lord Fowler said the reforms, which aim to cut costs and raise the quality of new peers, were vital to ‘build public confidence’ in the upper house.

Unless reforms are made soon, current trends mean the House of Lords will rise from 824 now to 1,000 within 25 years.

Peers who won’t even sit in the House

The Queen should confer peerages without offering a seat in the Lords as a way to bring down the size of the House, the report said.

‘Individuals of distinction’ could be given a life peerage and given the title of lord, without sitting in the upper chamber.

The idea is to encourage political parties to give figures ‘peerages without a place’.

That would please recipients who would like the dignity of the title, but are not interested in being a legislator.

No more new members would be appointed than there were vacancies. The report said: ‘We have thought about whether there would be merit in providing for peerages which would not entail membership of the House.

‘Such peerages might, for example, be suitable for individuals of distinction who are thought to deserve an honour at that level but who cannot be accommodated within the cap on the size of the House, or who do not wish to become a legislator.

‘We have been advised that the monarch is empowered to appoint life peers other than under the Life Peerages Act 1958. Peers appointed in this way would not be entitled to a seat in the House of Lords. We would encourage the Government to pursue this option.’

He said: ‘The House of Lords carries out vitally important work in holding the government to account. However, with over 800 members, about 150 more than the Commons, we are too large. The time has now come to take action to correct this and put a cap on numbers.

‘A smaller more effective house will be able to build public confidence and support for its crucial constitutional role in checking bills before they become law and in reviewing policy through their hard-working select committees.’

The Prime Minister’s spokesman and Labour said they would consider the report.

Lord Fowler said the proposals would only go ahead if it was shown to have cross-party support in a debate in December.The report lays down a proposed timetable of departures, with 48 Tories going by 2022, 38 Labour peers, 18 Liberal Democrats and 35 crossbenchers.

Although new peers would be appointed on a 15-year limit, there would be no change for existing peers.

To reflect public opinion more closely, new political appointments would be calculated on the average of the party’s share of the vote in the previous election and the proportion of seats won. That could see a gradual cutting of the number of Lib Dem peers, if they continue to perform poorly in elections. There are currently more than 100. Lord Beith, the Lib Dem member of the committee, said: ‘We intend to reverse our electoral fortunes in no time at all.’

No party would be allowed an absolute political majority and a minimum of 20 per cent of seats would be reserved for independent crossbenchers.

Hereditary peers are usually replaced in by-elections. If that system continues unchanged in a smaller House, the number of seats for hereditary peers would remain the same and they would make up a larger proportion of the membership.