House prices in Britain could fall nearly 5 per cent in the next two years according to analysts, wiping out some of the near 20 per cent gains made since the start of the pandemic.

Prices will drop 4.8 per cent overall by the end of 2024, in contrast to the 9 per cent annual gain it forecasted for 2022, Capital Economist predicts.

While most forecasts have predicted a small rise in house prices in 2023, it has revised its estimates to predict a 3 per cent fall. That, it said, would be followed by a further 1.8 per cent drop in 2024.

On the decline? Rising inflation and more expensive mortgages could result in a fall in UK house prices, according to Capital Economics

It said the resulting ‘peak-to-trough’ fall of 5 per cent would reverse a small chunk of the surge in prices since the pandemic began.

The fall, it said, would be due to rising inflation and a ‘sharp rise’ in mortgage rates in the months ahead.

Capital Economics predicted that the average mortgage rate, which is currently 1.8 per cent by its estimate, would double to 3.6 per cent at some point in 2023.

This would be the ‘sharpest rise in mortgage rates since 1990,’ it said, predicting that the increased cost of borrowing to buy a home would lead to an ‘abrupt slowdown’ in house price inflation.

However, the report said a repeat of house price crashes seen in 2008 or 1990 was unlikely. At those times, prices plummeted by as much as 20 per cent.

The report said: ‘While the house price-to-earnings ratio is roughly the same now as in 2007, we do not anticipate a return to pre-financial crisis mortgage rates of 6 per cent, so the cost of mortgage repayments will remain much less of a burden’.

Mortgage rates are increasing because the Bank of England has been steadily increasing its base rate to try and tackle rising inflation, with another rise potentially in the pipeline next week.

A higher base rate makes it more expensive for banks to borrow money, and they pass the additional cost to their customers. 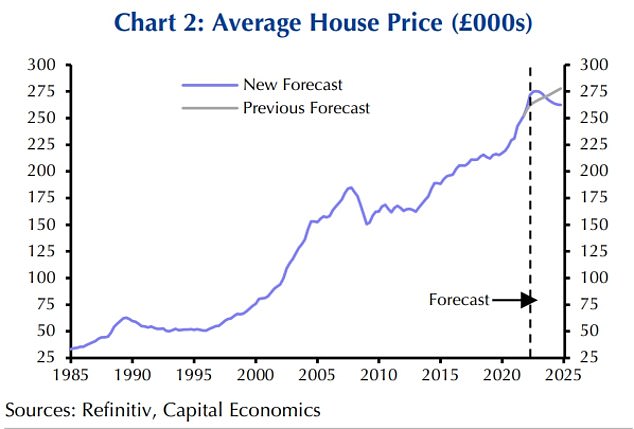 Capital Economics has downgraded its previous forecast for house price growth, and is now predicting a 3% fall in prices in 2023 and a 1.8% fall in 2024

Customers may also find it more difficult to pass affordability tests for mortgages from now on – or have to look at cheaper properties – as many lenders are factoring the rising cost of living into their calculations.

‘With several lenders, affordability is based on income rather than considerations in the costs of living. But as the costs continue to escalate, we could see lenders exercise caution and start to consider other factors to ensure the mortgage remains affordable.’

How does it compare to other predictions?

Other house price forecasts have predicted slight growth in house prices in the coming years rather than a fall.

Tom Bill, head of UK residential research at Knight Frank, said: ‘Some of the heat inevitably has to come out of the UK housing market as the distortive effect of the pandemic works it way through the system.

‘The wave will have to break at some point and we expect price growth to slow down this year as mortgage rates and the cost-of-living rise.’ 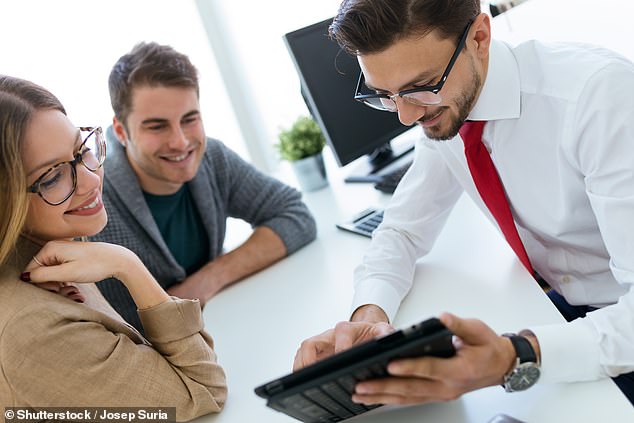 First-time buyer boost: Falling house prices will be welcomed by those getting on the housing ladder, many of whom have struggled to save a deposit amid steep rises

At the start of the year, Halifax predicted a typical rise of 0 per cent to 2 per cent; Rightmove predicted a rise of 5 per cent and Zoopla a rise of 3 per cent.

House prices have grown exponentially since the start of the pandemic, as lockdowns led to a desire to move to bigger homes further away from city centres.

Nationwide Building Society recently said that prices were 21 per cent higher than before the pandemic struck in early 2020, having risen in price by £33,000 in the last 12 months alone to a record £265,312.

Lower house prices could be good news for first-time buyers, many of whom have struggled to increase their deposit at the same rate as house prices have risen in the last two years.

Samantha Bickford, mortgage and equity release specialist at Clarity Wealth Management, said: ‘A cooling of the property market is welcomed from a buyer’s perspective as along with inflation, and interest rate rises, this is likely to help with the supply and demand issue the market has been experiencing.

‘This could make properties more affordable for first-time buyers who are vital to keep the property market moving.’

James Hyman, head of residential at agent Cluttons, suggested that buyers may wish to hold off on their purchases until later in the year to take advantage of lower prices.

‘Recent house price growth is unsustainable and out of kilter with people’s earnings especially with escalating inflation and increased living costs.

‘These challenges are going to lead to an element of anxiety in the market, increasing market supply and bringing down house prices later in the year and into 2023.

‘Increased supply will be welcomed by buyers however and they might want to hold off until later in the year.’

Negative equity warning for those with big mortgages 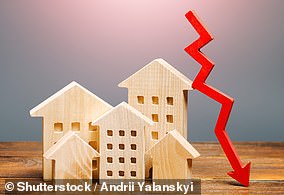 If a home’s value falls, those with large mortgages could be at risk of negative equity – where their mortgage is more expensive than the house itself

If house prices fall substantially, this may be a source of concern for those homeowners who have large mortgages, as a decrease in their property’s value could put them in negative equity.

This is where the value of a home is less than that of the mortgage secured on it, and it is a particular risk for first-time buyers who have only paid small deposits.

Bickford, said: ‘My main concern with a drop in house prices by up to 5 per cent is for first-time buyers who have taken a 95 per cent loan to value mortgage in recent years.

‘This could mean many high loan-to-value borrowers could find themselves at risk of being in negative equity.’

Negative equity can become an issue if a homeowner needs to move home or remortgage, and they will often need to stay in their property until its value increases above the that of the loan.