House prices in the UK edged downwards in February, but are predicted to hit record highs again after the stamp duty holiday was extended by Chancellor Rishi Sunak in this week’s Budget.

This still represented a significant 5.2 per cent uptick compared to February 2020, thanks to the rush of buyers that have flooded into the market since last summer when the tax holiday was initially announced.

House prices fell by 0.1% in February according to Halifax, but could be set to soar again

Annual house price growth has now topped 5 per cent for seven consecutive months. However, the year-on-year growth in February did not hit the highs of more than 7 per cent annual growth seen between September and November.

At the height of the market in November, the average house price was £252,890 according to Halifax.

However, economists have been forced to tear up their forecasts for the rest of the year thanks to announcements in this week’s Budget.

Although the market appeared to cool in February, it is widely tipped to heat up again now that buyers will still be able to benefit from the stamp duty holiday in some form or another until the end of September. 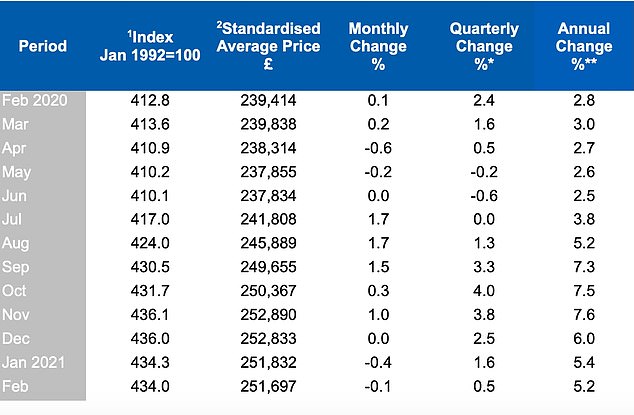 It will then taper off, applying to the first £250,000 until the end of September, before returning to £125,000 at the beginning of October.

As many as 300,000 additional home purchases are expected to now benefit by the end of June deadline, according to Rightmove, following Rishi Sunak’s announcement.

Nicky Stevenson, managing director at national estate agent group Fine & Country, said: ‘Economists have had to tear up their property predictions and the housing market now has every possible ingredient it needs to deliver another sustained wave of highs, similar to that seen in the second half of last year.’

Buyers are being warned that transactions are taking a long time to complete due to a ‘bottleneck’ in the legal and mortgage process, but experts predicted that this will not hold the market back.

Stevenson added: ‘Despite warnings already being aired that four months won’t be enough to complete a new purchase, buyers who began their property search this week are bound to think they’ve got a good chance of doing so by the end of June, when the tax break becomes less generous.

‘All these factors are set to send demand soaring in the coming months.’

The housing market is traditionally busier in the spring and summer months, and the new extension could compound that effect.

Lucy Pendleton, property expert at independent estate agents James Pendleton, said: ‘The ongoing stampede for larger homes left its boot print all over the performance of the market in February as it defied predictions of a severe slowdown.

‘Now that the stamp duty holiday has been extended, there is nothing standing in the way of a string of new record highs over the coming months.

‘While pumping up property prices is unlikely to have been the Chancellor’s aim, he has effectively fired the starting gun on what is set to be a second honeymoon for house price gains.’

The lifting of lockdown restrictions and the seemingly successful vaccine roll-out could also encourage people to move home.

Jonathan Hopper, CEO of Garrington Property Finders, said: ‘Though technically open for business and with Covid-safe viewings able continue in January and February, the front end of the property market spent the first two months of the year treading water.

‘But looking ahead, there’s every chance things will click back into gear very quickly as lockdown restrictions ease and months of pent-up demand are given free rein, and stoked by the Chancellor’s extended tax incentive.’