House prices were flat for the first time in nearly five years during the last three months, according to testate agents.

The latest Royal Institution of Chartered Surveyors report found that falling values in London dragged down the national average, with a net balance of 54 per cent of surveyors seeing prices fall rather than rise.

Capital: Falling prices in London have dragged down the national average, the Rics report says

Rics says its monthly house price balance fell to zero in November from +1 the month before.

This means its members were evenly split between those reporting price rises compared with three months ago and those seeing falls.

It is the lowest level recorded by Rics since March 2013.

Simon Rubinsohn, Rics chief economist, said: ‘The mood music in London and the South East is very much flatter than elsewhere and interestingly, the forward looking indicators suggest this is likely to persist into the new year.

‘It remains to be seen whether the scrapping of stamp duty for first-time buyers announced in the Budget will provide much of a lift for the market.’ 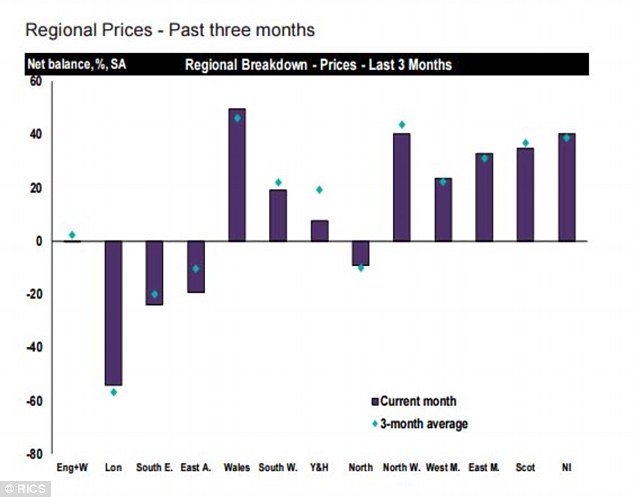 Falls: A net balance of 54% of surveyors are reporting prices dropping in the capital rather than rising, according to Rics

Prices in eastern and northeast England also fell, but there were solid gains in Wales, Northern Ireland and northwest England, Rics said.

Rics said the fresh supply of properties being listed for sale continued to deteriorate in November – and numbers have now been declining for 22 months in a row.

It said feedback received ‘suggests that housing market activity continues to be stifled by a persistent shortage of new instructions along with economic uncertainty.’ 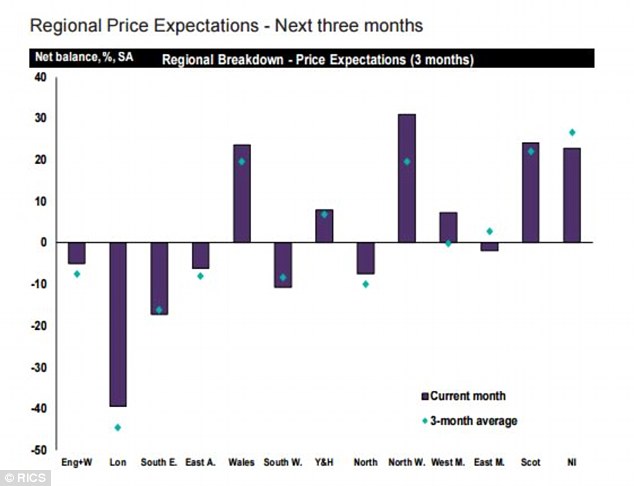 Price expectations: The short-term sentiment for the capital does not look rosy when it comes property prices

Brian Murphy, head of lending for Mortgage Advice Bureau, said: ‘November was an unusual month due to both an interest rate increase and changes to stamp duty for first-time buyers, along with what one might suggest to be a challenging political and economic environment.

‘The fact that the market has remained stable is likely to be welcome news for many in the industry.

‘Pragmatically, many believe that a “flat” market at least represents stability, and going into 2018 that would provide the market with a firm footing.’ 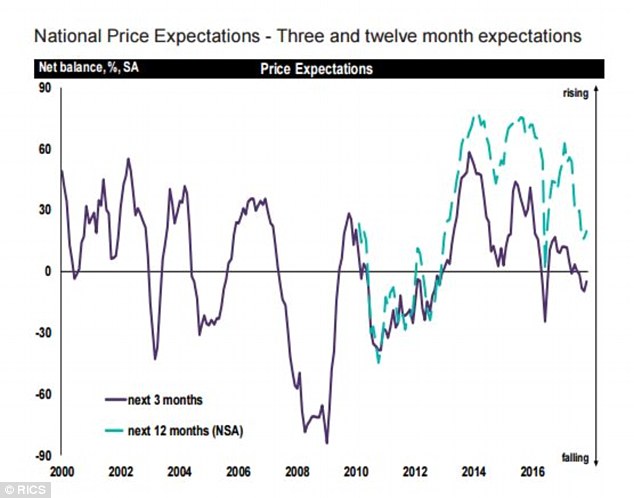 Long-term: Surveyors believe that prices will fall in the next three months – but will be higher in 12 months time

Office for National Statistics data for the year to October, released earlier in the week and based on sales, showed that prices are up £10,000 compared to a year ago.

Prices for Britain as a whole were 4.5 per cent higher, while London was up 2.1 per cent. Meanwhile, data from Rightmove, looking at asking prices, reported a £8,000 decrease on the month.

London’s housing market is the most exposed to foreign investors’ concerns about Brexit, as well as to tax increases for property purchases valued at over £1million

Last month the Government scrapped property purchase tax for most first-time buyers as the flagship measure of its annual budget in a bid to tackle falling home ownership among young people who find it increasingly hard to buy their own home.

Rics said its members had seen little sign of increased interest from buyers in the weeks since the change. 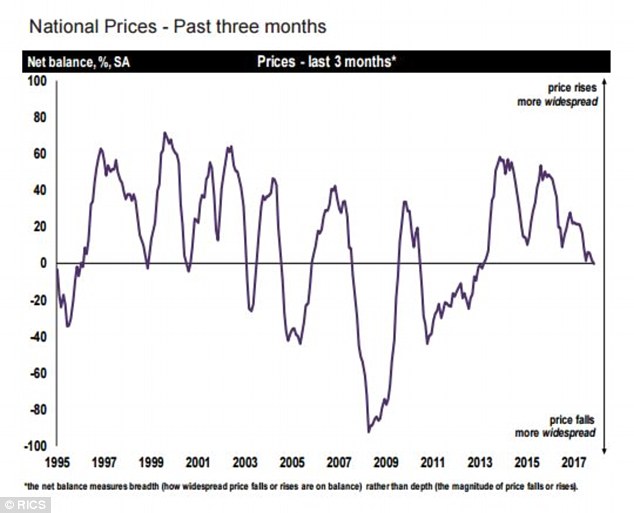 Flat: House prices in the last three months have been ‘flat’ according to surveyors

The body also reported the biggest fall on record in demand from tenants to rent property – though it said this was likely to be partly a seasonal effect in the run-up to Christmas.

Jeremy Duncombe, director at Legal & General Mortgage Club, said: ‘There is still more that can be done to ease housing pressure.

‘Extending the stamp duty exemption to downsizers, for example, would be a sensible move.

‘This would help to encourage retired borrowers to move, and therefore increase the amount of suitable properties on the market, boosting housing stock for growing families and younger buyers.’

WHAT THE AGENTS SAY

Anthony Filice of Kelvin Francis Ltd in Cardiff, said: ‘Many potential vendors are holding back until January.

‘The interest rate change has had little impact. Stamp duty change for first-time buyers is an incentive that I expect will encourage activity.’

UK Finance, which is a body that has combined activities of organsiations such as the Council of Mortgage Lenders and the British Bankers’ Association, says it is more optimistic about the number of housing transactions increasing in the coming years.

Mohammad Jamei, senior economist at UK Finance, said: ‘We are slightly more optimistic about the next two years than we were a year ago.

‘We expect more first-time buyers over the next two years, helped in part by competitive mortgage rates and government housing schemes.

‘Home movers numbers have recovered a little in 2017, but look set to remain flat over 2018 and 2019, as they have benefitted less from government support and have been largely left to fend for themselves.

‘The number of home owners re-mortgaging with a new lender has grown strongly in 2017, and our expectation is for this to continue over the medium term.

‘Regulatory and tax changes are among several factors that are reducing confidence in the buy-to-let market.

‘This has led to subdued house purchase activity by landlords since the middle of 2016 and we expect more of the same over the next two years.

‘Housing market activity on the whole has recovered somewhat over the last 12 months helped by first-time buyers, but this recovery only brings activity levels back to where they have been since 2014.

‘Looking ahead, we expect activity to continue flat over the next two years, in part a result of economic uncertainty.’