House prices reached a record average high of £213,000 this month, according to new figures from Nationwide Building Society.

Property values in Britain climbed 0.2 per cent month-on-month during April, reversing a 0.2 per cent decline in March, its latest house price index has revealed.

The annual pace of house price growth also accelerated to 2.6 per cent, from 2.1 per cent when they slumped to a seven-month low in March.

New high: UK house prices hit a record average high of £213k this month, according to new figures from Nationwide

However, Britain’s biggest building society warned that house price gains are expected to slow to one per cent this year, reflecting weak economic growth and possible higher interest rates.

Robert Gardner, Nationwide’s chief economist, said: ‘Looking ahead, much will depend on how broader economic conditions evolve, especially in the labour market, but also with respect to interest rates.

‘Subdued economic activity and the ongoing squeeze on household budgets is likely to continue to exert a modest drag on housing market activity and house price growth this year.

‘We continue to expect house prices to rise by around one per cent over the course of 2018.’

Gardner said the share of cash transactions in the housing market has fallen slightly over the past 18 months.

However, he added that cash buyers still account for around a third of sales. 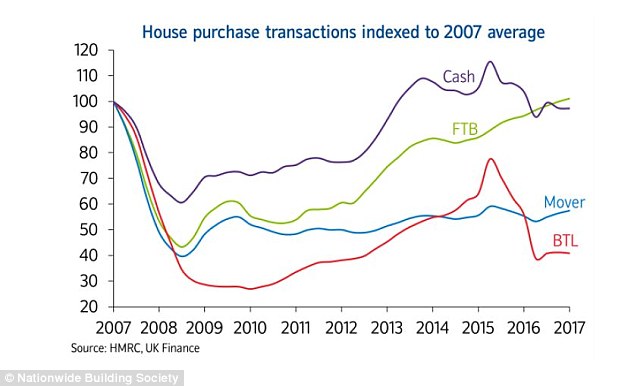 Buying: There has been a recovery in first-time buyer transactions

Gardner suggested the decrease was partly due to the introduction of an additional stamp duty levy for people buying second homes and rental properties, a large proportion of which tend to change hands using cash.

He added: ‘In recent years, we have seen a recovery in first-time buyer transactions, which are now broadly in line with pre-crisis levels.

‘The easing in credit availability, including schemes such as Help to Buy, have helped boost activity. Meanwhile, home-mover activity has remained relatively subdued, in part due to the lack of stock on the market.

‘Buy-to-let purchases have fallen as a share of total transactions since 2016.’

House prices have been rising much more slowly than before the European Union referendum result, which hit consumer confidence. 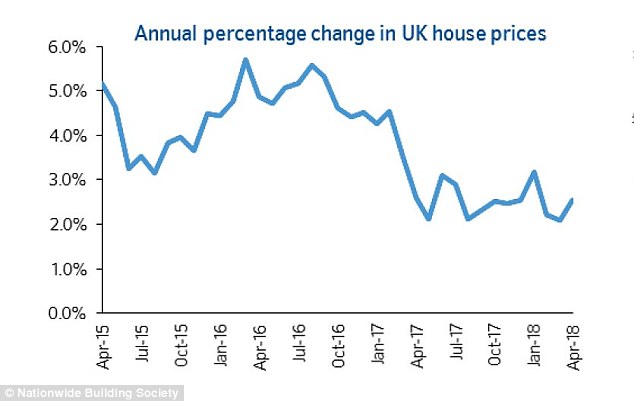 Howard Archer, chief economic adviser at EY Item Club, said: ‘It is very possible that housing market activity – and possibly prices – were adversely impacted in March by the severe weather that particularly occurred during the month.

‘Even so, the current softness of the housing market runs deeper than that.’

He added: ‘We continue to expect price gains over the year will be limited to a modest two per cent.

‘The fundamentals for house-buyers are likely to remain challenging.

‘Consumers have faced an extended serious squeeze on purchasing power, which is only gradually easing.

‘House-buyers will also likely be concerned about further interest rate hikes over the coming months.’ 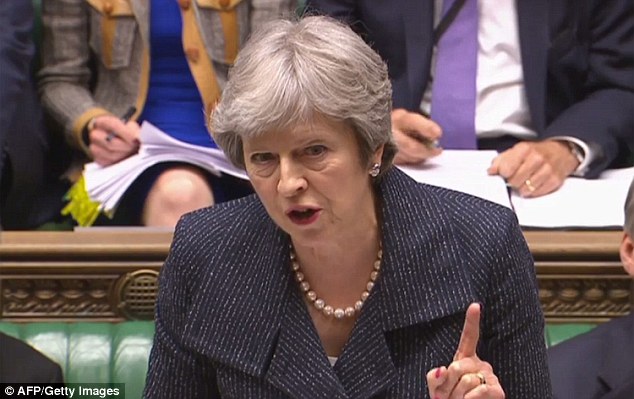 Housing shortage: Prime Minister Theresa May wants construction of new homes to increase to 300,000 a year to tackle a shortage of housing

Mike Scott, chief property analyst at Yopa, said: ‘Nationwide are forecasting a rise of one per cent for 2018 as a whole, which if anything is looking a little pessimistic.

‘However, there are a few clouds on the horizon.

‘They report falls in the numbers of both buyer enquiries and houses coming up for sale, suggesting a slowdown in market activity, although this may not have much effect on prices if the drops in demand and supply run in tandem.’ 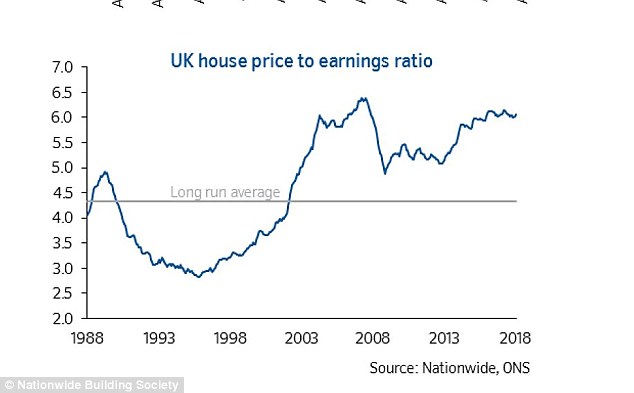 Hovering: The house price to earnings ratio continues to run far higher than the average

Jeremy Leaf, north London estate agent and a former RICS residential chairman, said: ‘The small increase in house price growth is probably more to do with a lack of supply rather than a burst of springtime activity.

‘Nevertheless, a rise is more welcome than a fall and in line with other recent statistics shows that the market is continuing to follow a slow upward path, albeit without any fireworks.

‘Looking forward, we don’t expect a huge change but we are seeing an increase in valuations and listings which is likely to show itself in a little bit more activity over the coming months.’ 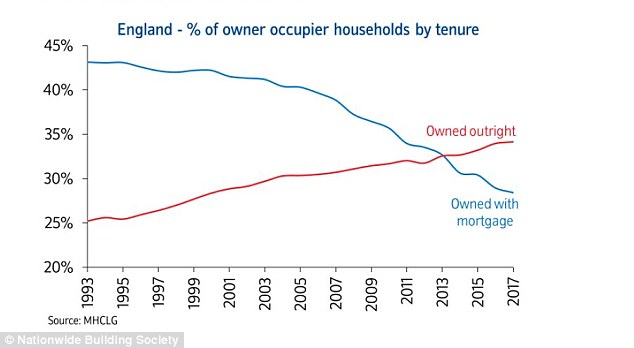 Bigger gap: Number of homes owned outright versus owned with a mortgage

Brian Murphy, head of lending for Mortgage Advice Bureau, said: ‘While the growth is, at best, incremental, it does at least point to a market which remained robust in the first four months of this year.

‘One might suggest that the subdued average increase in values could be a reflection of current market dynamics.

‘London and the South East are seeing a higher level of available properties than previously coupled with reduced demand putting a dampener on pricing, contrasted with many areas in the rest of the UK still seeing a drought in properties on the market, leading to lack of buyer choice.’

The Bank of England has said it expects to continue raising interest rates after making the first increase in over a decade in November 2017.

Many investors believe there’s a likely chance of another hike next month.

However, a shortage of homes for sale is expected to continue to shore up the housing market.

Prime Minister Theresa May wants construction of new homes to increase to 300,000 a year to tackle a shortage of housing.