House prices in major UK cities to slow down in 2019, but London is forecast to see a fall of 2% or more

House prices have slowed across the majority of the UK’s biggest cities to rise at their lowest level in five years – and this trend is set to accelerate into 2019 as London property values fall.

This year, Manchester, Liverpool, Cardiff and Newcastle are the only major cities to have seen prices grow faster than they did in 2017, while the other 16 have all seen slower growth, according to Hometrack.

House price inflation across the UK’s biggest cities was 2.6 per cent this year, down from 3 per cent in 2017, mostly because of falls in London and a sustained slowdown across cities in the South.

Cities house prices: London will turn negative, but Liverpool and Glasgow are expected to see price growth of about 5 per cent, Hometrack said

Hometrack said the trend is set to continue, forecasting average major city house price  inflation will ease to 2 per cent in 2019, with future price rises or falls depending mostly on affordability and Brexit.

In London, house prices are forecast to fall by 2 per cent next year, with some high value areas in for even bigger price falls.

‘The fundamentals of housing affordability will shape the prospects for city house prices in 2019,’ Hometrack insight director Richard Donnell said.

‘This is already the case with flat to falling prices in the most unaffordable cities and above average growth in the more affordable areas.’

He added: ‘Ultimately, the speed at which affordability translates into price changes depends on economic factors, changes to mortgage rates and household sentiment.

‘Brexit is the greatest driver of uncertainty in the near term and the prospects are for a slow start for the housing market in 2019.’ 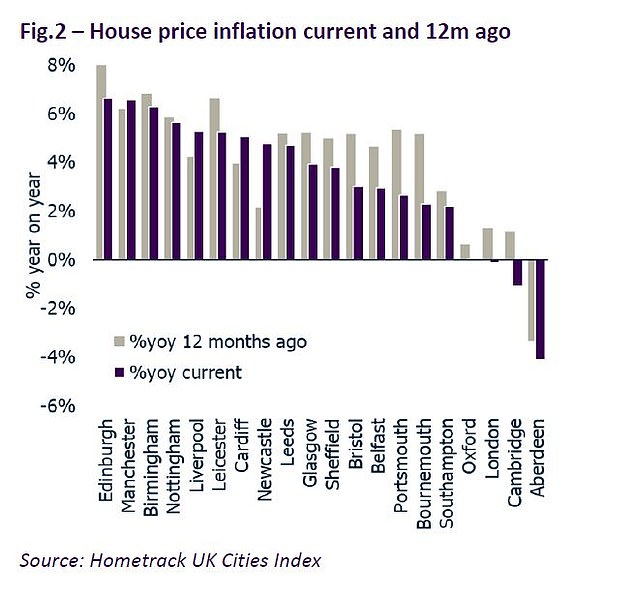 London prices are already in decline – down 0.1 per cent compared to last year, which marks the second time in 23 years that London sees prices decline, Hometrack said.

That’s mostly down to a mix of stretched affordability, a succession of tax changes and increased uncertainty over the outlook, which have all affected demand. 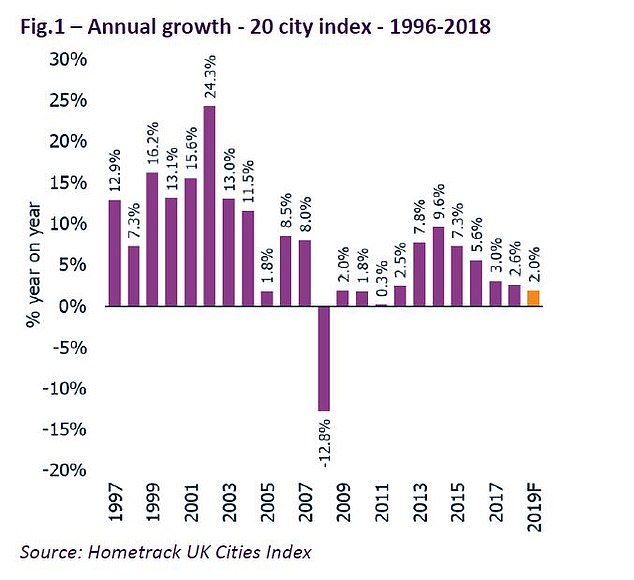 Annual price growth has eased to its lowest level since 2012

However, Hometrack expects prices to grow by up to 5 per cent in the most affordable markets such as Liverpool and Glasgow.

At present, Edinburgh is currently the fastest growing city, with prices up 6.6 per cent, followed by Manchester and Birmingham also running at above 6 per cent.

However, only four cities are registering higher levels of house price growth than this time a year ago – Manchester, Liverpool, Cardiff and Newcastle.

The cities that have the seen the greatest slowdown are all located in the south of England, such as Bournemouth, Portsmouth and Bristol.

Cambridge and Aberdeen were the only other two cities, aside from London, to see prices fall, down 1.1 per cent and 4.1 per cent respectively compared to November last year.