Property prices surged 10 per cent annually in November 2021, according to the latest official figures.

This marked a small increase in price inflation compared to October, when prices grew by 9.8 per cent, the Office for National Statistics’ house price index shows.

The figures confirm that house prices continued to climb, even after the stamp duty holiday finished at the end of September 2021.

The tax break, which lowered home buyers’ bills by up to £15,000, contributed to rapidly rising prices after it was introduced in July 2020.

This was despite the cost of a home increasing by £10,000 more than the maximum tax break.

The number of housing transactions taking place also increased in November, growing by nearly a quarter compared October according to HMRC.

However, it was 16.4 per cent lower than the number of transactions in November 2020.

This suggests that the slight dip in October following the end of the stamp duty holiday may have been a temporary blip. 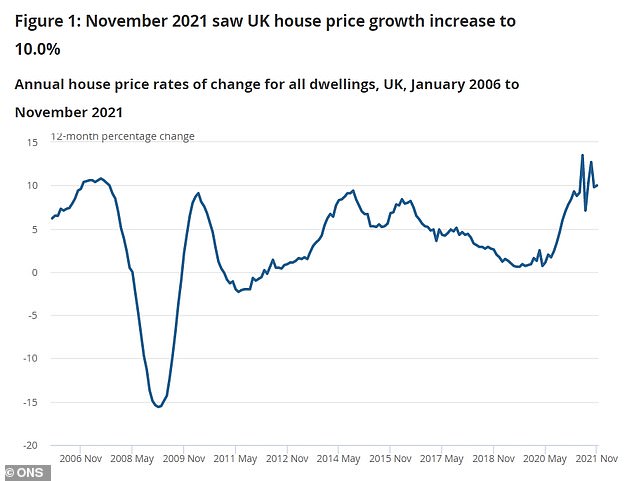 Rise: The rate of house price growth ticked up in November compared to October 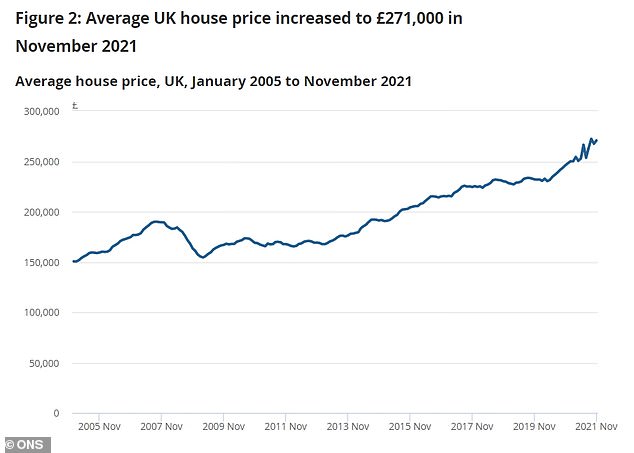 Phillip Stevens, director of Richmond estate agency Antony Roberts, said: ‘It was business as usual in November as property prices rose again following October’s dip, which came about following the end of the stamp duty holiday.

‘There is plenty of evidence that buyer demand remains strong, especially for houses, and with relatively little stock available it is a house seller’s market.’

However, experts said that the spectre of rising inflation and increases in the cost of living could serve to dampen the housing market later in 2022.

This depends to some extent on whether there are further increases in the Bank of England’s base rate, which would likely push up the cost of a mortgage.

Mark Harris, chief executive of mortgage broker SPF Private Clients, said: ‘There is further speculation that the Bank of England will raise interest rates by 0.5 per cent at its February meeting in order to counter rising inflation, and it remains to be seen what impact this will have on buyer confidence.

‘Squeezed affordability would be an issue, preventing first-time buyers in particular from getting on the ladder.’

Looking at the different countries of the UK, house prices increased 9.8 per cent over the year in England to reach an average of £288,000.

The South West was the region with the highest annual house price growth, with average prices increasing by 12.9 per cent in the year to November 2021. This was up from 10.8 per cent in October 2021.

The lowest annual house price growth was in London, where average prices increased by 5.1 per cent over the year to November 2021, down from 6.7% in October 2021.

Despite being the region with the lowest annual growth, London’s average house prices remain the most expensive of any region in the UK at an average of £520,000. 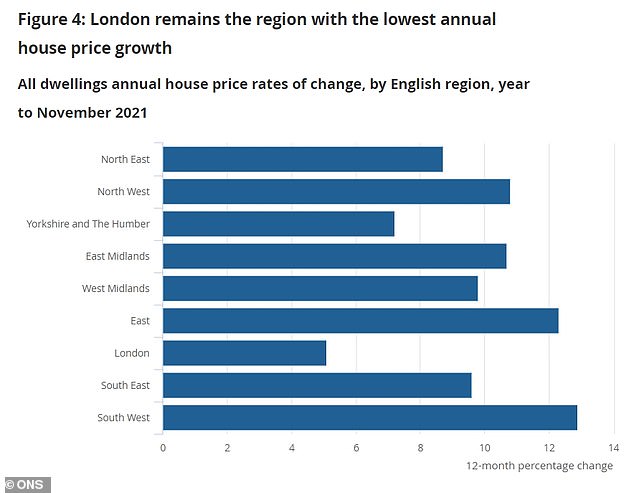 The North East continued to have the lowest average house price at £149,000, but prices still increased 8.7 per cent in the year to November.

The fact that the number of homes on the market is much lower than the number of interested buyers is another factor continuing to drive up prices, along with Britons’ desire to change their living arrangements due to the pandemic.

Nick Leeming, chairman at estate agent Jackson-Stops said: ‘Last year proved to be an astonishing year for the property market, with prices and demand defying expectations set by the pandemic in January.

‘Whilst today we see average house prices up slightly from those recorded in October, the figures still reflect lack of supply in the market and are therefore impacting levels of demand in the year to November 2021.

‘It is evident that this imbalance between stock and demand will continue to underpin housing activity in coming months.

‘This is reflected by what we are seeing across our branches where the complex and ongoing changes to the nation’s working patterns and lifestyle aspirations have only heightened the importance Britons place on owning a home.’