The average property price increased 5.4 per cent in the year to September 2017, official figures reveal this morning.

It means the typical home in Britain is now worth £226,000, some £11,000 higher than a year earlier, defying some expert predictions of prices reversing after years of runaway growth.

Annual house price inflation is up from the 4.8 per cent recorded a month earlier by the Office for National Statistics in its monthly index.

North West: House prices in the region grew 7.3% in the year to September 2017. Pictured, Manchester

The annual growth rate has slowed since mid-2016 but has remained broadly around five per cent during 2017, in the face of Brexit talks – and despite worries over consumer lending and the wider economy.

A new hotspot has emerged in September according to the data, with the North West showing the highest annual percentage rises, with values increasing by 7.3 per cent in the year to September 2017.

This was followed by the South West at 6.6 per cent and the East Midlands at 6.4 per cent, according to the figures that lag behind other similar indices.

Meanwhile, the lowest annual growth was recorded in London, where prices increased by 2.5 per cent over the year.

Between 2014 and 2016, the capital saw double-digit annual inflation. 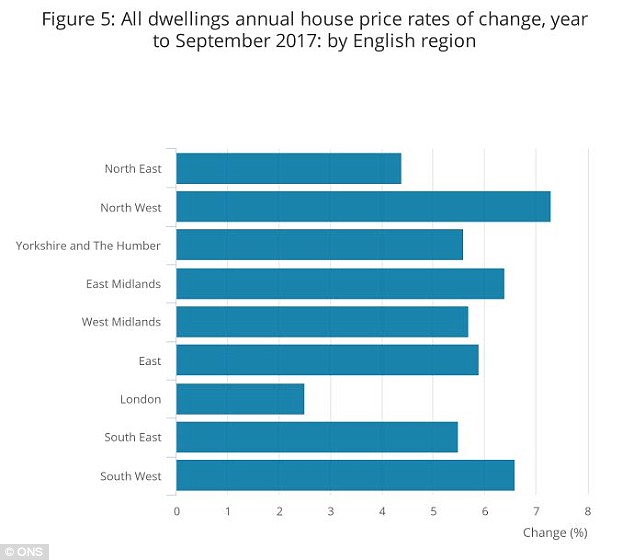 Regional: Percentage growth in the North West is nearly three times that of London

However, values in London are roughly three and a half times larger than that recorded in the cheapest area, the North East. 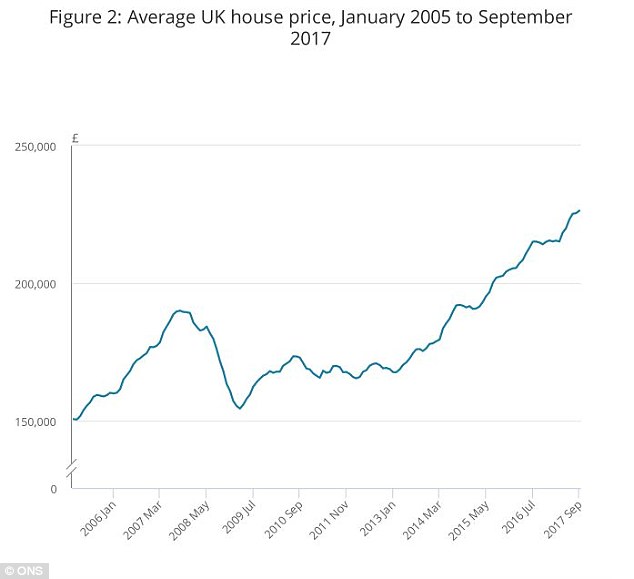 Rising: The average UK house price has continued to race ahead since 2013

‘With house prices estimated at 7.6 times the average annual salary, for the majority of would-be first-time buyers the prospect of affording their own home is not a near possibility, leaving them forced to rent for longer to save a deposit.

‘With housing set to be a key area for the Budget, we hope to see a real push from the Government to address the chronic issues in the market.’ 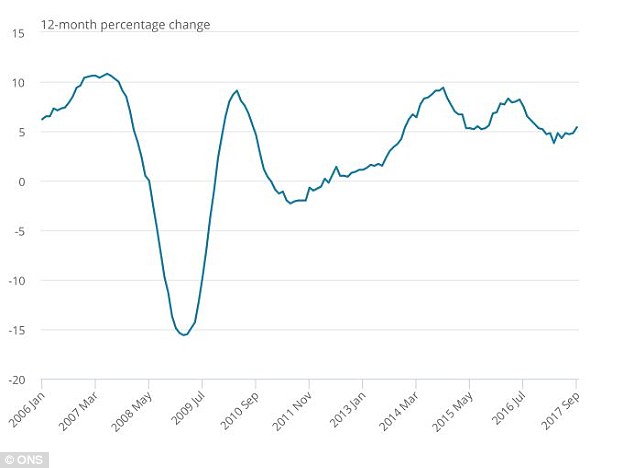 Annual inflation: It has remained steady over the course of 2017, the ONS says

The main contribution to the increase in house prices came from England, where values increased 5.7 per cent over the year, with the average price now £244,000.

The average price in Northern Ireland currently stands at £132,000, an increase of six per cent over the year to quarter three. 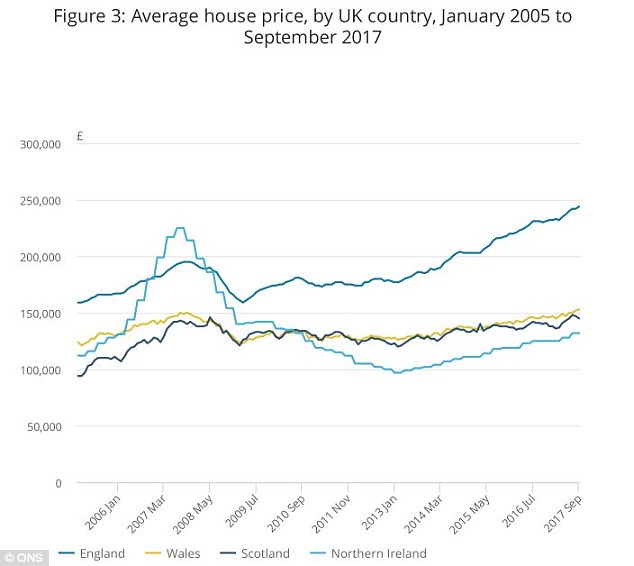 ‘This is certainly promising for those on the ladder and we should see a large degree of stability return with a heightened level of buyer interest come January.

‘It is yet to be seen what, if any, impact the marginal increase in interest rates will have.

‘It is likely that while many will sit back and see through the Christmas period as a result, there will be no medium to long-term impact on the UK’s appetite to buy property, with the cost of borrowing still very affordable for the masses.’ 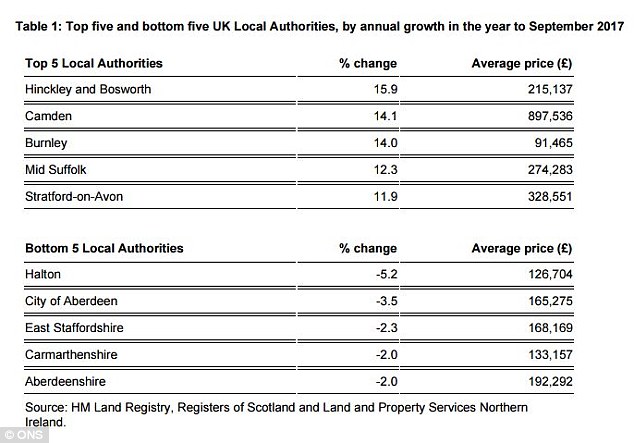 Rise and fall: Hinckley and Bosworth saw the strongest growth in September

The local authority showing the largest annual growth in the year to September 2017 was Hinckley and Bosworth, where prices increased by 15.9 per cent to reach £215,000.

In September 2017, the most expensive borough to live in was Kensington and Chelsea, where the cost of an average house was £1.2million.

In contrast, the cheapest area to purchase a property was Blaenau Gwent, where an average house cost £85,000.

Last week, data from Halifax showed that property values increased 2.3 per cent between August and October, the fastest three-month pace of growth recorded since January.

Annual house price inflation of 4.5 per cent last month saw a typical British home hit £225,826, another record high, according to the monthly index from one of Britain’s biggest lenders.

Property prices had dipped from £222,190 recorded in December 2016 to £218,477 by June, fuelling homeowner fears that values were on a downward spiral.

However, a lack of supply and low mortgage rates continue to prop up values. The typical home has increased in value by more than £7,000 since the dip seen in June.

Richard Snook, senior economist, PwC, said: ‘Our latest market projection, published in July, was for growth of between three and give per cent in 2017, with four per cent as the central scenario.

‘Growth for the year is now likely to be around the upper end of this range.

‘The other notable trend is that these price gains are being experienced on increasingly low transaction volumes, which were 15.2 per cent lower in July 2017 than July 2016.

This does point to a lack of broader market momentum and may lead to a softening in price growth as we move into 2018.’