A suburban house that has been transformed into a living laboratory is, scientists believe, set to revolutionise the treatment and diagnosis of Parkinson’s disease and even some forms of dementia.

The property is equipped with sensors that detect tiny changes in the patient’s strength, posture and the time it takes them to finish tasks. These help track how well patients respond to medication and pick up signs of improvement or deterioration that might otherwise be too subtle to detect.

The idea is that patients would go into the house to test new drugs, allowing doctors to see how well they work. This could speed up clinical trials of disease-halting medications by providing pinpoint measurements of changes to such things as gait or grip.

For instance, fridge handles, the kettle and the kitchen cupboards are fitted with sensors that can detect the grip strength or the amount of pressure the patient exerts. Sensors can also monitor the time it takes them to open the bread bin and put bread into and remove it from the toaster.

Meanwhile, sofas, beds and chairs are made with smart textiles, which detect body weight and subtle changes in position.

Patients, who will stay for days or weeks at a time, will wear sensors on their wrists, feet, chest and lower back to track gait and posture as well as any tremor — a characteristic of Parkinson’s — and bradykinesia (abnormally slow movement).

Readings can be sent wirelessly to a command suite near the entrance hall, where the information is collated to track how a patient’s condition is progressing or how they respond to a medication.

‘One of the issues we have with Parkinson’s is that we cannot monitor the progression of the disease accurately, which means we cannot test new drugs very effectively,’ says Dr Beckie Port, research communications manager at Parkinson’s UK. ‘Clinical trials could have failed in the past, not because the drugs have not worked, but because we were unable to test them effectively in Parkinson’s.’

The house in New York is the focal point of Project BlueSky, a joint venture between pharmaceutical company Pfizer and computer firm IBM.

Technicians have trialled the technology for a year on IBM staff to calibrate standard settings that can be compared to those of the Parkinson’s patients.

The condition affects an estimated 127,000 people in the UK, but a report warns that numbers may double by 2025 because of our ageing population. 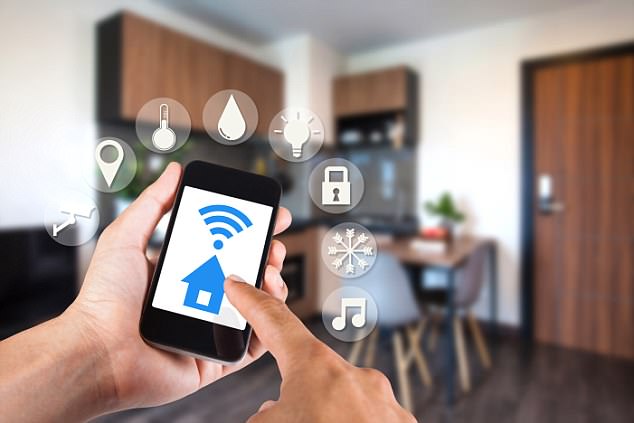 The living laboratory is equipped with sensors that detect tiny changes in the patient’s status, such as strength and time taken to finish tasks (FILE photo)

It is a progressive neurological condition caused by a lack of dopamine, a brain chemical that helps control movement. Symptoms include slowed movement and stiff muscles, but can extend to pain, anxiety, depression, sleep disturbance and bladder issues.

Diagnosing Parkinson’s is difficult as the symptoms are often dismissed as natural ageing.

Currently there are a series of often-crude tests, such as walking up and down a hospital corridor, or touching your nose with a fingertip. The gold-standard medication, levodopa, was introduced 50 years ago, but treats only the symptoms and becomes less effective with time. Trials of new drugs have been hampered by the difficulty in measuring the changes they bring.

‘We are in a strong position to develop better drugs in the future,’ says Dr Beckie Port. ‘But we know that people need these drugs now, so we need to get them faster with improved clinical trials.’

The hope is that the Parkinson’s house will also provide information that will help improve diagnosis of the disease.

‘If you go back ten years, for most people with Parkinson’s there are signs — these are the things we are trying to capture and measure now,’ says Peter Bergethon, Pfizer’s head of quantitative medicine.

‘My father had Parkinson’s. He was a professor known for his speeches and his stentorian voice; one of the first things that goes often unrecognised is the ability to motor your voice, as happened to my father.

‘The idea is for doctors to note changes in movement, just like they would in blood pressure for other conditions, and have the ability to treat Parkinson’s before it becomes devastating.’

Dr Port adds: ‘Technology could help with early diagnosis and create opportunities for digital health to provide home monitoring, allowing people to stay put for as long as possible and allowing carers and family members to know their loved ones are safe.’