Laurence Brown, 60, has been fined £300 after he set a fox-snare for his neighbour’s cat because it wouldn’t stop fouling in his hot tub

A householder who set a fox-snare for his neighbour’s cat to stop it fouling in his hot tub has been fined £300 and warned he could face jail if he targets the animal again.

Laurence Brown, 60, tried screens, pepper, and even lion dung after the feline began to ‘repeatedly’ defecate in the heated outdoor whirlpool.

However Falkirk Sheriff Court heard that the deterrents ‘appeared only to make his neighbour’s pet more determined’.

After these attempts failed to stop the cat, Brown bought a snare on the Internet and set it where the animal was squeezing through the palings of the fence that divided his garden from the cat’s.

Prosecutor Susan Campbell said: ‘His garden backs onto their garden, and the gardens are separated by a six foot fence which has spaces which the cat can fit through.

‘On 22nd June the owner of the cat heard a yowling noise coming from the area of the fence.

‘He saw his cat dashing and realised that she had a piece of wire round her neck.

‘It was a loop of yellow wire with a small metal fixing and there was no stopper on the device which would have prevented it from continuing to tighten.

‘He got some scissors and cut it off. The cat was not injured.’

Ms Campbell said the cat’s owner – who was not named – challenged Brown about the incident, who claimed he was ‘trying to catch foxes’.

But on Wednesday November 28 Brown, a lorry driver, of Derwent Avenue, Falkirk, pleaded guilty to setting an illegal and inhumane snare and trapping the cat, whereby it became entangled and unable to free itself, causing it unnecessary suffering.

He also admitted contravening the Wildlife and Countryside Act by setting a snare ‘calculated to cause unnecessary suffering’ to any animal coming into contact with it, in that it had no ‘stop’ on its noose. 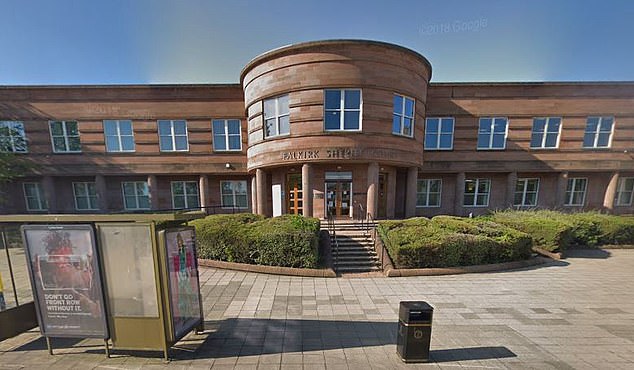 Falkirk Sheriff Court (pictured) heard how Brown bought the snare on the internet for £5.50 after his attempts of using screens, pepper, and even lion dung to deter the cat failed

Allegations that he had also tried to poison the cat were dropped by the prosecution.

Brown’s solicitor Gordon Addison said Brown had resorted to snaring the cat only after all other measures failed.

He said: ‘Mr Brown and his wife had a whirlpool hot-tub, and it was being repeatedly fouled, and of course that meant draining it, cleaning it, refilling it, and disinfecting the whole lot, so it was expensive every time.

‘Efforts were made to determine what animal was doing it, and it became apparent it was the neighbour’s cat.’

Mr Addison said Brown tried pepper and lion dung – which he described as ‘the usual sort of measures’ – to deter the cat, without success.

He then erected a fence round the hot tub, but that did not work either.

Mr Addison said: ‘He also put a roof over the hot tub and what can loosely be described as a midgie screen around it.’

All this cost more than building the hot tub in the first place.

Mr Addison said: ‘After all that, it appeared that the cat became more determined than ever.

‘When the midgie screen went up, the cat tore it to shreds, so as a last resort Mr Brown put down these pieces of wire that he bought on the Internet for £5.50.

‘The cat was caught once. It was checked over and it was fine, it was not injured, and it is no longer fouling the hot tub. That seems to be the sum and substance.’

He told him: ‘You had a limited record when you appeared before me, but you now have a conviction for animal cruelty, and that will live with you.

‘Not only that, you will have to live with the consequences of your actions – not least of which is knowing that your neighbour knows that you set a trap for his cat, which on the basis of the narration given to me by the Crown, can only have been with the intent to either maim that animal or at least cause it significant injury.

‘Fortunately for you it was unhurt, but I should tell you this: Parliament intended these offences to be taken seriously, and that is why Parliament provided me with the power to send you to prison for up to 12 months.

‘You should understand that if there is any repeat of this sort of behaviour, the court will undoubtedly regard it seriously.’

Brown left court without commenting. The cat’s owner was also unavailable for comment.