Energy bills are likely to rise by nearly £600 to £1,865 next year for a typical dual fuel customer, as the gas price crisis continues.

Following further highs in wholesale costs and the raft of supplier failures seen in the last few months, the domestic default tariff price cap for summer 2022 will likely increase by hundreds of pounds, according to analysts Cornwall Insight.

It is also an increase of around 12 per cent on the analysts’ previous estimate of the summer 2022 cap.

Energy bills are likely to rise to a £1,865 annually for a typical dual fuel customer, experts say

Wholesale prices have surged due to ongoing supply concerns for electricity and gas; geopolitical pressures affecting the European gas market; and the usual colder weather associated with the winter season.

However, it has said this figure may change considerably before the price cap is formally announced in August 2022.

The price cap was introduced by industry regulator, Ofgem, in January 2019 as a way of keeping a limit on increasing energy bills.

Currently, the cap is at its highest level of £1,277 – a jump of £139 from the previous cap – but this is still much cheaper than many fixed deals on the market.

Since wholesale prices have started to soar, 25 suppliers have folded with millions of customers put through Ofgem’s Supplier of Last Resort system.

This is where customers are automatically moved to another provider by Ofgem, ensuring they have a consistent supply.

Cornwall Insight’s assessment of the total cost associated with those suppliers that have gone through the regime, is approximately £2.4billon.

The figures do not include Bulb, previously Britain’s seventh-largest energy supplier, which is instead going through Ofgem’s special administration regime. 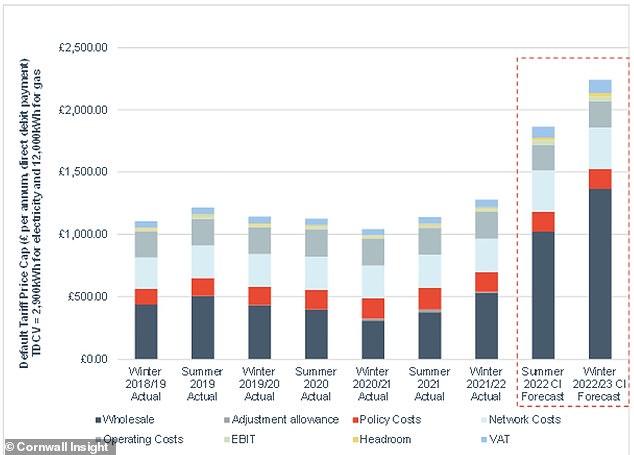 Cornwall Insight, energy analysts, predict there will be significant increases to the price cap

Based upon its assumption that those customers’ new suppliers will have had to purchase gas and electricity on the wholesale market to meet this new demand, the costs associated with these trades, compared to the wholesale cost element of Ofgem’s default tariff price cap, represent the lion’s share of this sum.

Those acquiring suppliers will be able to apply to Ofgem to recover the costs of taking responsibility for these customers.

This is a well-established approach through which the cost of these claims are recovered through the network charges paid by domestic gas and electricity customers.

This £2.4billion, therefore, equates to approximately £90 per household, assuming there are 27million customers from which this sum can be recovered.

However, Cornwall Insight’s forecasts for summer 2022 and winter 2022 to 2023 already include around £30 per annum worth of costs associated with the former suppliers.

This is based upon indicative 2022 to 2023 charging statements from the gas distribution operators and its own assessment of the impact of mutualisation associated with the Renewables Obligation low carbon generation support scheme.

With charging statements to follow from the other energy network companies, Cornwall Insight anticipates the remaining costs associated with the wave of supplier exits – currently forecast to be an additional £60 per customer per annum – will be crystallised within the coming months.

Dr Craig Lowrey, senior consultant at Cornwall Insight, said: ‘With Ofgem examining a wide range of potential reforms to both the cap and the way in which the costs associated with supplier failures are recovered, we note that there is still a large amount of uncertainty relating to the level and structure of the cap.

‘However, with the energy supply sector still dealing with the exit of more than two dozen companies in a matter of weeks, the need to ensure resilience across the entire market is evident.

‘Furthermore, it is not solely domestic customers that are dealing with these new highs in energy costs, as businesses will face their own set of challenges without the protection afforded by the default tariff price cap.’

Previously, customers were advised to switch to a fixed deal as these were much better value than default tariffs.

However, households are now being advised to stick to a default tariff as it is capped by Ofgem.

The price cap is currently at its highest level of £1,277 which is much cheaper than most fixed deals on the market.

Despite this, it is also expected to increase after it is reviewed in April with many experts expecting it to rise by around £300.

Customers on a long term fixed deal are probably the safest at the moment as their prices won’t change.

However, those coming off a fixed deal should consider carefully whether joining another fixed contract, likely at a much higher rate, or to join a default tariff for now and wait to see if it increases in April.