Hoverboards are sending thousands of children to hospital

Cheap electric skateboards are fun to go strolling with. However, skate lovers are also more than ever before inspired to try hoverboards, but a recent study reveals that hoverboards had enrolled thousands of children to hospitals, due to accidents.

Trendy hoverboards are sending tens of thousands of children to hospital, a new study reveals.

The toy, which can cost in the region of £180, has soared in popularity since it was invented five years ago.

However, the gadgets, which have been used by Canadian pop star Justin Bieber, have gained notoriety for catching fire.

But scientists have now discovered the majority of injuries caused by hoverboards are from fractures and sprains – not burns.

Experts at Weill Cornell Medical Center, New York, estimated 25,000 children injured themselves by falling off the toy between 2015 and 2016.

Hoverboards are sending tens of thousands to the emergency room, according to new study

Doctors are now calling for parents to stop their children from riding hoverboards – and if they do, warn wearing helmets and wrist guards are essential.

‘Riding one safely requires a good amount of core strength to maintain your balance. It often looks a lot easier to ride one than it really is.

‘My personal feeling is that they are unsafe, and I would advise parents against allowing their teens and children to ride them.

‘That said, I would advise caution if you do allow your child to ride one.

‘It’s essential that they wear an appropriate and well-fitted helmet, as well as wrist guards with padding to reduce the risk for injury.’

Researchers compared 26,854 hoverboard injuries and 121,398 skateboard injuries that ended up in emergency rooms at US hospitals between 2015 and 2016.

The most common injury were fractures, at 40 per cent, while contusions, sprains and strains were less frequent.

Children mostly injured their wrist, forearm or head. Only a few were injured by burning, according to the study published in Paediatrics. 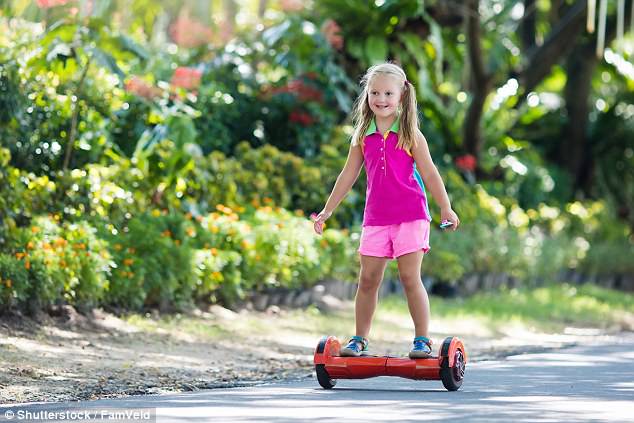 The study estimates that over 25,000 kids have injured themselves by falling off the latest toy

They found 11 year olds were the most likely to injure themselves on hoverboards – but 13 was the most common age for skateboard injuries.

They found also that boys were more likely to be injured, and the majority of these injuries happened at home.

Dr Sean Bandzar, lead study author, told Reuters: ‘Many of these injuries may be avoided with proper protective gear.

‘Parental supervision is one of the best ways to reduce the risk of injury, in addition to having children wear helmets and wrist pads.’

The researchers state these results will help parents understand the risks associated with these toys.

‘This is a well-known pattern seen for falls associated with many consumer products,’ Smith,’ Dr Gary Smith, president of the Child Injury Prevention Alliance in Ohio.

‘Starting in the pre-school years, children have enough strength and coordination to use their out-stretched arms to attempt to break their fall.

‘The force of their fall often causes a fracture in one of the bones in their forearm near the wrist.’

Hoverboards, which began gaining popularity in 2015, had some initial problems with overheating and bursting into flames.

British officials warned in November that year that consumers should be careful when buying a cheap hoverboard, because they could explode.

A Welsh family were left homeless earlier this week after their son’s hoverboard burst into flames and burned down their home in Porthmadog.

Tammy Humphreys and her children have been left devastated after the toy caught fire while charging and filled their home with thick black smoke.

The use of the name ‘hoverboard’ is controversial, as these boards don’t actually hover. The term ‘self-balancing ‘electric scooter’ is sometimes preferred.

HOW TO SPOT A ‘SAFE’ HOVERBOARD, ACCORDING TO SAFETY OFFICIALS

‘They won’t have manufacturer details on them.

‘Plugs won’t go into your socket properly and without a fuse, they’re very dangerous.

‘The product itself should have a CE mark on it and the ones we have found have nothing on them at all.

‘These things have batteries in them that can overheat and catch fire and we’ve seen that happen in the county already. Remember the golden rule, if it seems too good to be true, it probably is.’

The instructions should contain all the information you need to use the product safely and the manufacturers name and address should be included so you can contact them if anything goes wrong.

Check for spelling mistakes on the box; this is a giveaway for counterfeits. They also often copy safety marks, so take a close look to be sure they are genuine.