A Nigerian football team that came from obscurity to nearly win the country’s top division put their success down to a no sex, long hair, diving or tattoos policy.

Mountain of Fire and Miracle Football Club (MOF), one of the biggest teams in the Nigerian version of the Premier League – has some of the strictest rules for footballers on the planet.

Players from the Christian team have to live in a church seven days a week and are banned from taking drugs, drinking, gambling or smoking.

They are also told not to win freekicks or penalties by diving and faking injuries under the club’s strict code of conduct.

The team emerged from obscurity 11 years ago and were close to winning the Nigerian Premier League last year, finishing second, but were just pipped at the post. 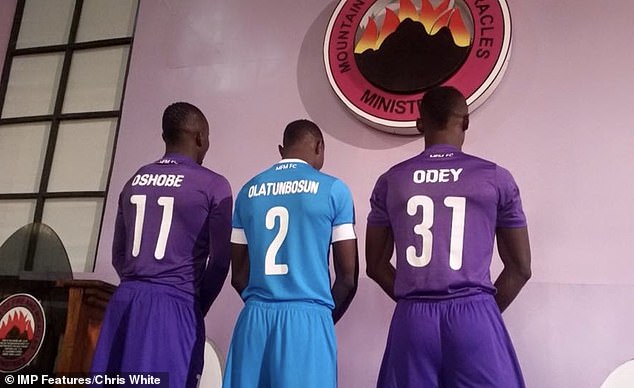 With their routine of praying before, during and after each match the club attribute their success to their strict code of conduct 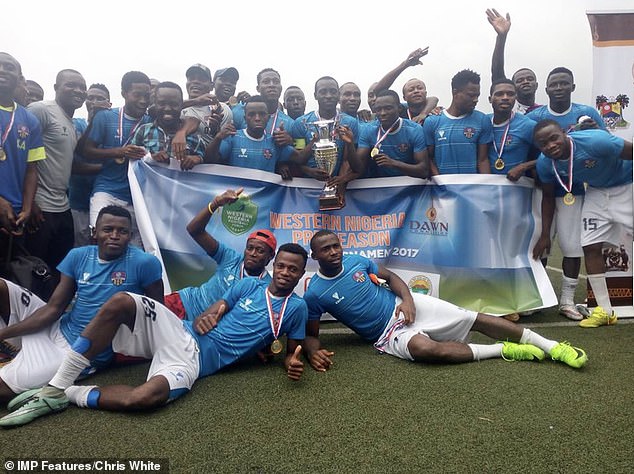 The Nigerian team emerged from obscurity 11 years ago and were close to winning the Nigerian Premier League last year, finishing second

The club, founded in 2007 and based in Lagos, also won the inaugural Church World Cup in Colombia three years earlier.

MOF’s meteoric rise rivals Leicester City’s jump from relegation candidates to Premier League winners in 2016 in the space of a year.

Pastors for the Nigerian team have been literally praying for a miracle each week and the club has been enforcing the code of conduct for players.

Godwin Enakhena, the club’s chairman, calls his players ‘football monks’ and says the rules are simple.

Players also have to pray before, during and after every match with a personal pastor assigned to each member of the squad.

None of the team are allowed to wear jewellery or have dreadlocks and have to abide by the ‘absolute celibacy’ rule.

Any players with tattoos have to cover them up with long sleeves and they are not even allowed to wear baggy trousers.

Mr Enakhena said: ‘We are special, more than any other football club in the world. We use football for the youth to lead a useful life. We rescue youths from Satan. 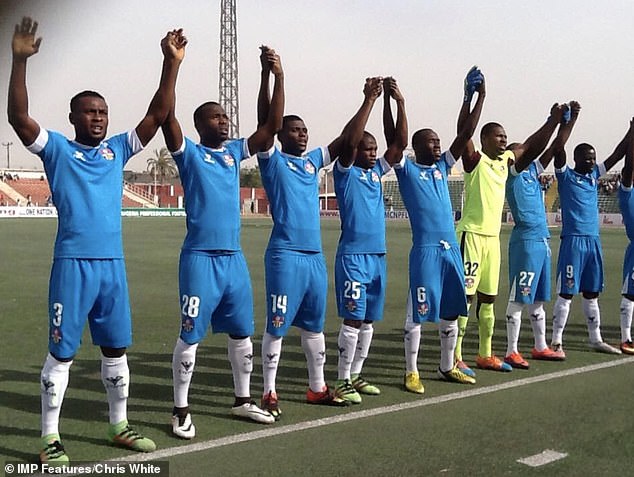 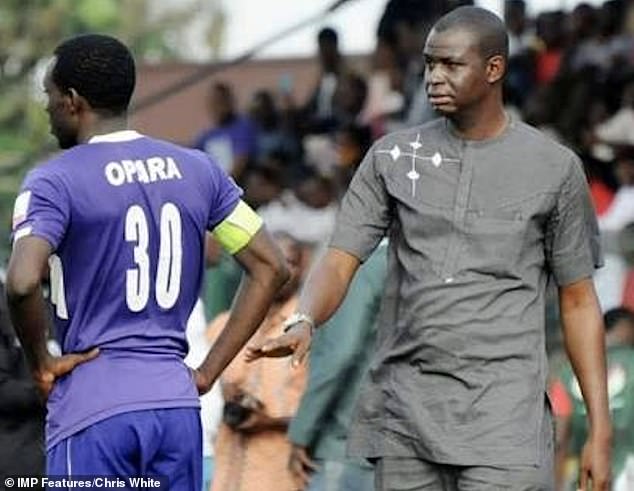 Godwin Enakhena, the club’s chairman, described his players as ‘football monks’ and says the strict Christian rules are simple

Players have to live in a church seven days a week and are banned from taking drugs, drinking, gambling or smoking

‘If you’ve already got them [tattoos], wear a long sleeved shirt to cover them up. You have to comb it [hair], it has to look very good, no dreads, no jewellery. You can’t have saggy trousers, no way.

‘First and foremost, we don’t run the club like the Premier League clubs. The professional side go training and we insist that everyone stays at the Church, seven days a week.

‘Everybody must eat and sleep in the camp. That is the only way to control the players.

‘In the UK, you’re free to do what you want after training. Right here, when you’re in Rome you behave like Romans, it’s not a conventional team, it belongs to a Church.

‘The doctrine is you work so hard, and pray so hard, we are going to help you by attaching pastors to you, who can talk to you. Our purpose is to ensure that our players reach their potential.’ 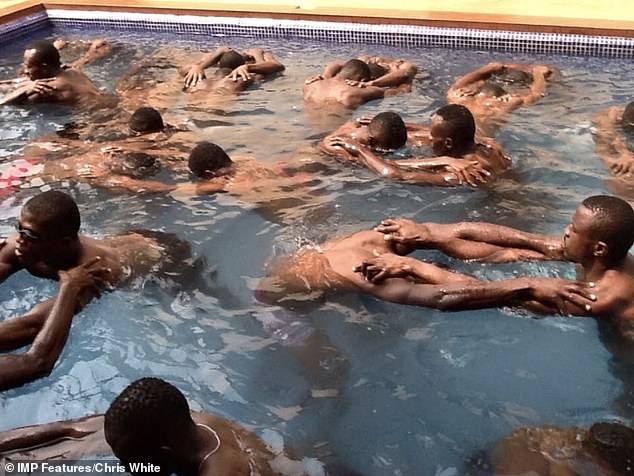 Tattoos, long hair and baggy trousers are banned under the Christian team’s strict code of conduct 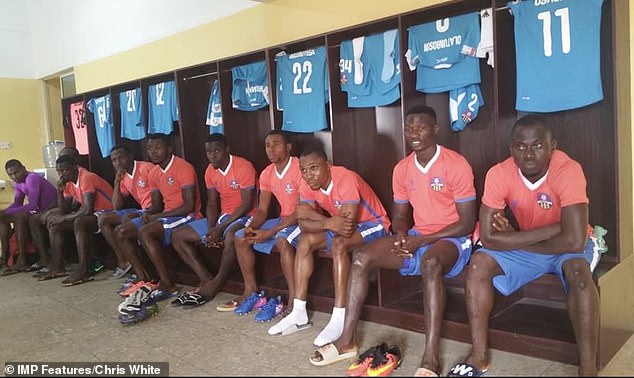 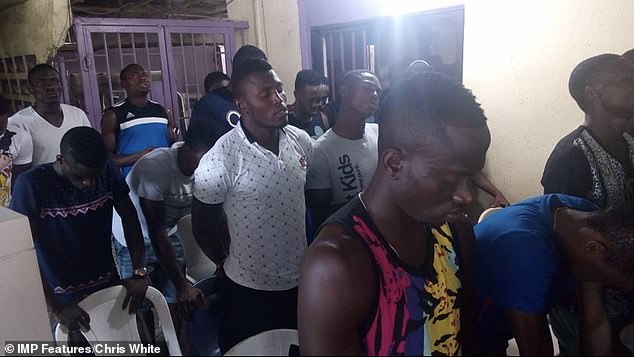 He added: ‘English clubs could learn from us, you have to manage the personnel, the youth, the Dele Allis of this world, the little Wayne Rooneys, he shouldn’t have had a life like he did at that age. 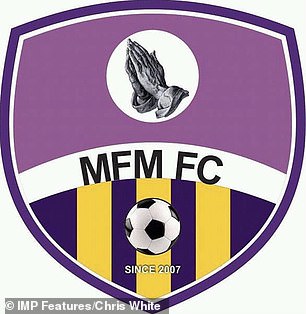 ‘Like for a player such as Balotelli, where he has good potential, but he is a man in the body of a child.

‘He has refused to grow up, we pray for him, we make him good, stop him from going to clubs, and following that path. We are praying for him to not go to nightclubs, smoking and drinking, driving at 80mph.

‘When you see the average Brazilian go on the pitch, like a Kaka, Neymar, they get on their knees and pray, we do the same – pray for no injuries, God we have done our work, trained hard, grant our reward.

‘We do it on the pitch before the game, and at the end, win or lose, may God’s Will be done. No injury or death is more important than results,’ says Godwin. 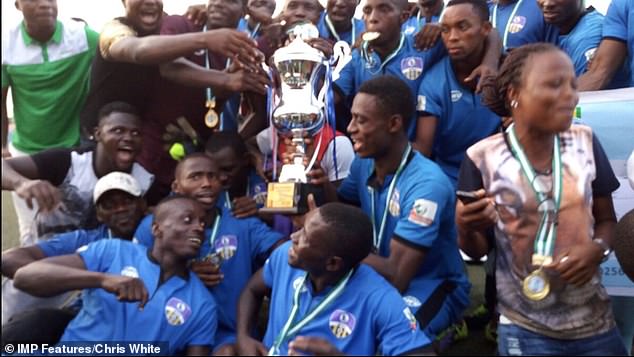 Champions: The club, based in Lagos, won the inaugural Church World Cup in Colombia in 2016, winning 7-0 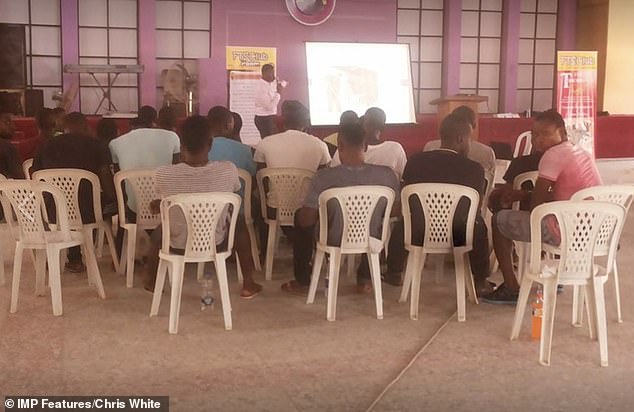 Each player is assigned their own pastor to mentor and guide them to pray before, during and after every match 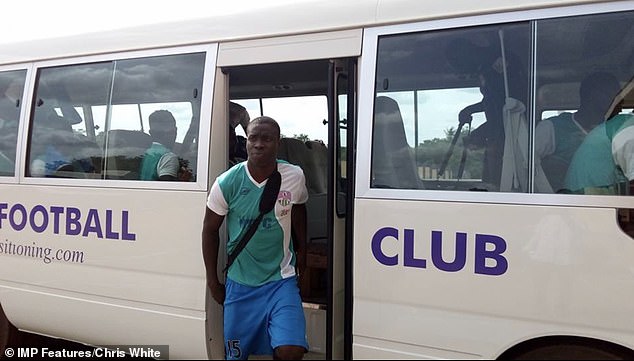 Mr Enakhena claimed divine intervention helped the team claw back a 2-0 deficit in the last minutes of the game to then secure a victory on penalties.

He said: ‘Once, we were 2-0 down, and it was 89 minutes and we were praying, this is key, it’s a powerful weapon, God doesn’t answer all of the prayers, then there’s no challenges in the world, me and the pastors were praying.

‘[In the] 89th then 91st, we score, then penalties, we scored all our penalties, they didn’t get one. We worked very hard, then prayed, they go hand-in-hand.’