Millions more Australians could be plunged into isolation within the next week after a gold miner exposed hundreds of colleagues to the Indian Delta strain of Covid-19 – who then flew home to every state.

About 750 workers at Granites gold mine, north-west of Alice Springs, were sent into isolation over the weekend after the miner tested positive on Saturday.

But another 900 fly-in-fly-out workers had already travelled home to cities across Australia before the worker was told he had coronavirus, sending state health authorities into panic.

Darwin went into a snap 48-hour lockdown on Sunday after 196 of the workers presented for testing, which resulted in four confirmed cases.

Another 24 went to Alice Springs and tested negative, and there are an additional 70 contacts at the Howard Springs hotel quarantine facility.

Western Australian health authorities scrambled to isolate and start testing 252 contacts who flew into the state over the weekend.

Southeast Queensland is ‘on the verge of lockdown’ after 170 workers arrived in Brisbane and a female miner from the Bli Bli area of the Sunshine Coast tested positive to the Delta strain after spending time out in the community. 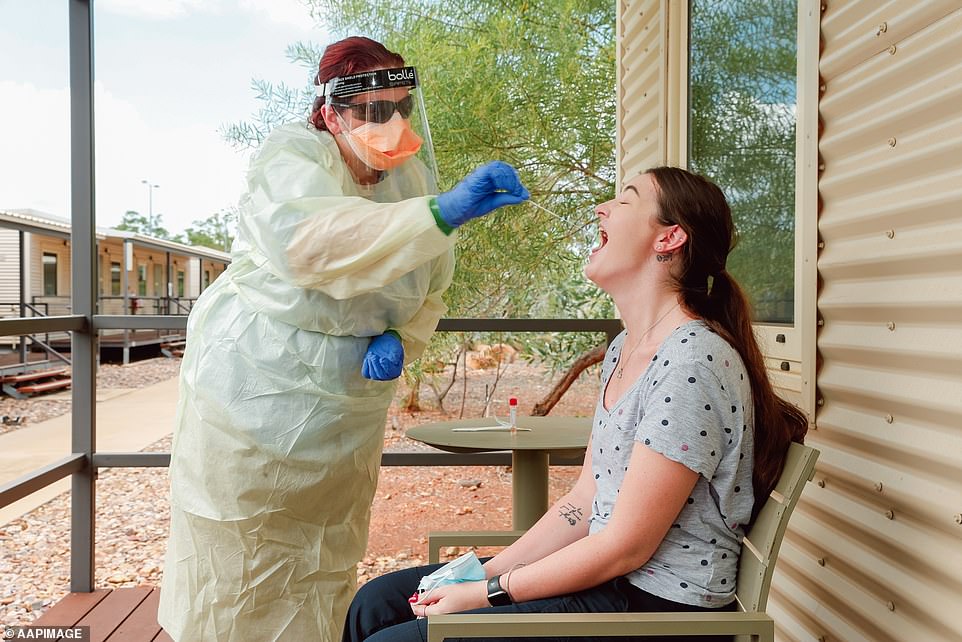 City of Darwin, City of Palmerston, Litchfield, Wagait Shire and Belyuen Shire, and Darwin Waterfront will all stay into lockdown until Friday at 1pm (pictured a woman getting a Covid test in Darwin)

The state is also grappling with a further three infections from a different cluster, bringing the total up to 41.

It is not known how many miners entered NSW, but one person linked to the outbreak in the NT tested positive in Australia’s most populated state – bringing the total number of infections to 130.

Sydney entered into a two-week lockdown on Saturday evening after the eastern suburbs cluster started spiraling out of control.

The gold miner is believed to have been unknowingly infectious from June 18 until he tested positive.

NT Chief Minister Michael Gunner announced at a press conference that the lockdown, which will cover Darwin, Palmerston, and Litchfield, would start at 1pm on Sunday and run through to 1pm on Tuesday.

‘We are assuming the worst,’ Mr Gunner said.

‘We are expecting more cases. There is a stronger chance that any new cases will have exposure sites which makes the job of tracing and testing much bigger.’

At first it was believed the miner may have contracted the virus while in a Brisbane quarantine hotel as the man staying opposite was infected with the British Alpha strain. 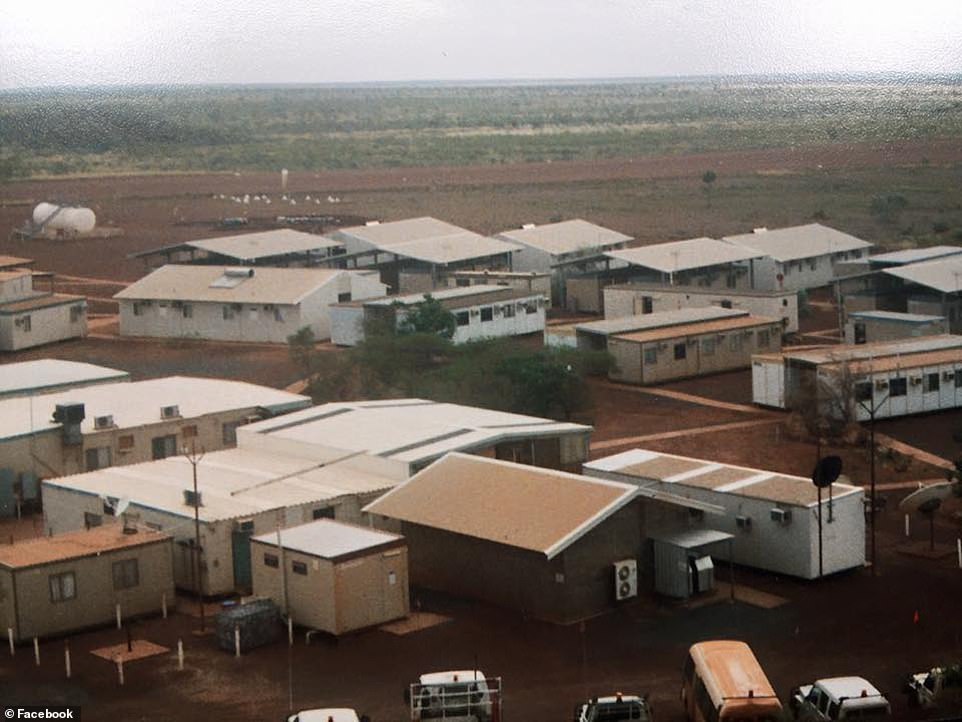 About 750 workers at Granites gold mine (worker accommodation pictured), north-west of Alice Springs, were sent into isolation over the weekend after the miner tested positive on Saturday

The mining outbreak brings the total number of locally-acquired infections in the Territory to six.

Meanwhile, Queensland Premier Annastacia Palaszczuk said the next 24 to 48 hours are critical if health workers are going to stop a surge in cases in the state after three new infections were recorded overnight on Monday.

When asked at a press conference about the threshold for lockdown, Ms Palaszczuk said: ‘When we have unlinked community transmission.’

‘We are going to be looking at this day by day and we will not hesitate to take action, I’ll tell you that,’ she told reporters.

‘This a highly infectious strain and we need to get on top of this very, very quickly.’

The mask mandate will apply for the next two weeks. Masks do not need to be worn while driving a car or outside exercising. 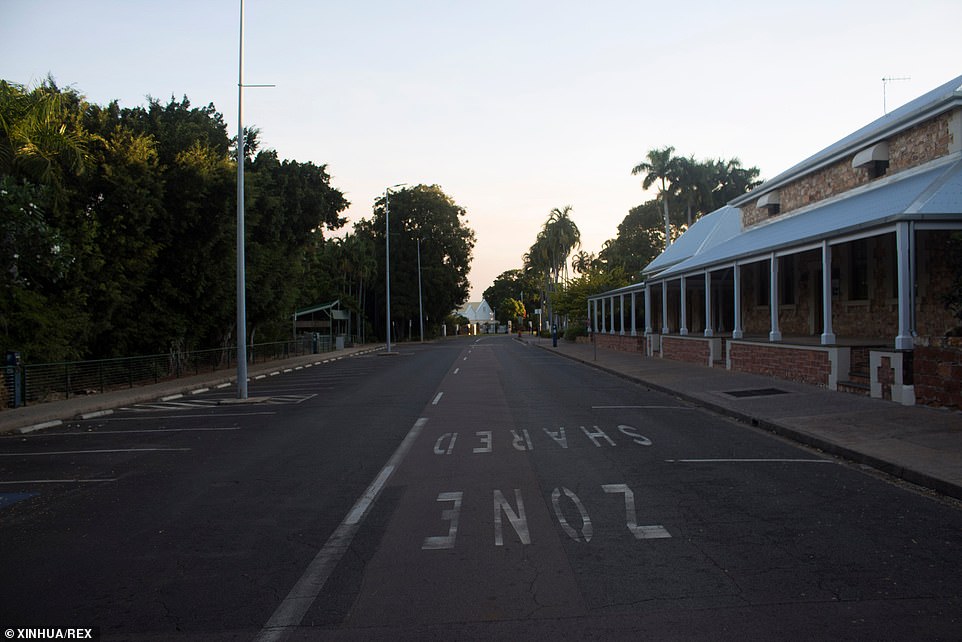 Usually busy streets in the Territory are currently deserted after the lockdown was extended until Friday, July 2

Only 30 people would be allowed to visit people in their homes and the one person per 4sqm restriction had also been reintroduced in public places.

People visiting restaurants and cafes must be seated, and must use Queensland’s check-in app on entry.

The second case in Queensland is linked to the Portuguese Family Centre cluster caused by an overseas Emirates flight attendant who tested positive after observing 14 days hotel quarantine a week ago.

A retail worker at the DFO shopping centre near Brisbane Airport tested positive for the virus before her partner also developed symptoms overnight on Sunday.

There are also reports the person worked at a police watch house, and officers are working to determine when the woman may have worked her last shift and whether she was infectious at the time.

Neither of the new cases are the Indian Delta variant and are suspected to be linked to the infected Portuguese flight attendant who travelled to the Sunshine State earlier this month.

Chief Health Office Jeannette Young urged people not to wait until the total mask mandate comes in on Tuesday.

Fears are growing the nation is on the edge of a deadly new wave of infections, with Prime Minister Scott Morrison calling an emergency national security committee meeting on Monday. 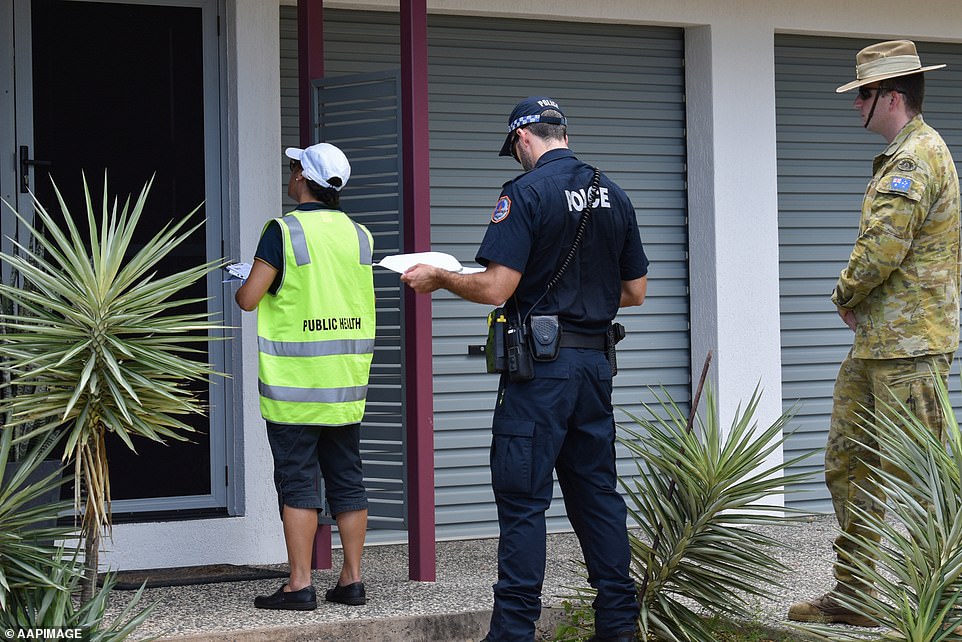 Territorians in hotspots will also only be allowed to exercise for one hour a day with one other person they live with Pictured: NT officers checking on people in quarantine

There are also separate clusters in other states believed to be linked to the UK Alpha variant.

Sydney’s worrying outbreak has also spread to the west coast after a woman dined in a Bondi café at the same time as an infected resident.

The physiotherapist ate lunch at Lyfe Café in Sydney’s east before flying home to Perth on June 20, when she returned a negative Covid test.

Premier Mark McGowan responded with sweeping restrictions to the Perth and the Peel region in an attempt to curb any further spread.

Face masks will be mandatory for at least the next three days on public transport, all indoor settings and outdoors when physical distancing is not possible.

All public events that cannot be restricted to under 150 people must be cancelled.

Sunday’s AFL match between West Coast Eagles and Western Bulldogs went ahead without any spectators.

A 30-person limit has also been introduced for all private gatherings, while hospitality, retail and entertainment venues must now comply with the two square metre rule.

Weddings and funerals will be permitted to proceed with no more than 150 attendees.