Revealed: The medieval STI that can KILL babies is on the rise in Australia – and has already claimed the lives of seven infants

A medieval sexually transmitted disease is on the rise in Australia and has already killed seven babies.

There have been thousands of cases of syphilis reported in Australia since the outbreak began in 2011.

The disease can be passed from mother to baby, and in extreme cases can result in infant death.

There have been 2400 cases of syphilis in Australia in seven years including 15 congenital syphilis deaths.

Among those, seven babies have tragically died as a result of the disease.

Young, deadly, syphilis free is an STI awareness campaign that was developed by the government in response to the increase in sexually transmitted syphilis infections.

Many notable people in history either had or were suspected of contracting syphilis during their lifetimes, including Oscar Wilde, Van Gogh, Henry VIII and Beethoven.

There have also been new outbreaks reported in South Australia, with Victoria reporting its first congenital cases in 14 years, news.com.au reported.

Seven of those babies born with syphilis have died since the outbreak was declared, with one infant dying among the two congenital cases reported last year.

The signs and symptoms of syphilis can vary depending on the stage of the disease – and in some cases, people will have no symptoms at all – making diagnosis difficult.

The Department of Health states on its website cases are predominately among young people aged 15 to 29, and is particularly prevalent in Indigenous communities.

‘We are making progress but the fact that this preventable and treatable yet deadly disease is rampant in some First Nations communities is a tragedy that should never have been allowed to happen,’ Mr Wyatt said. 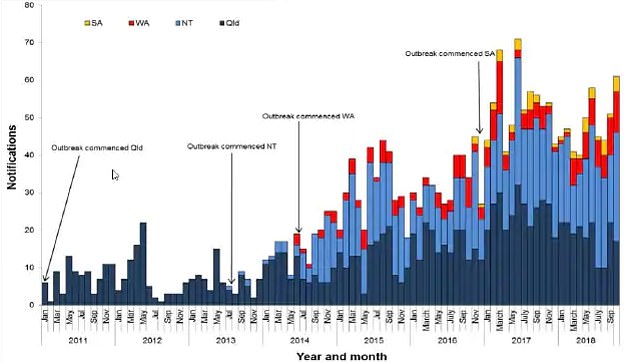 Since the outbreak was first reported by The Department of Health in 2011, the disease has spread to Western Australia, South Australia and Queensland 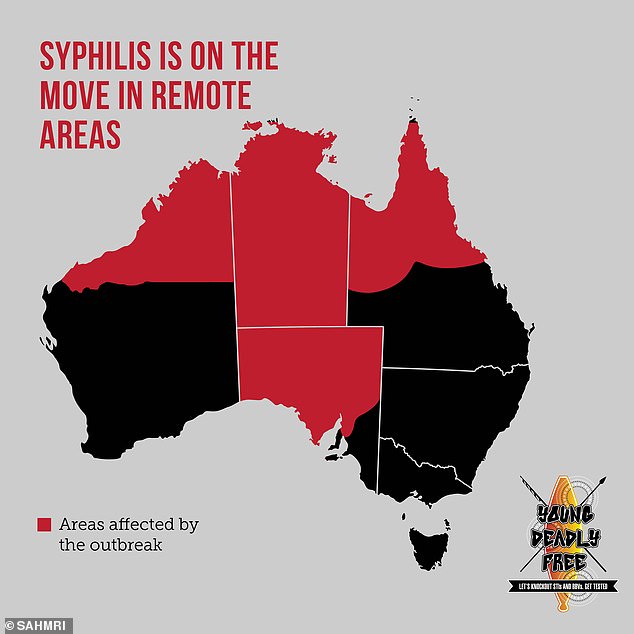 Since the outbreak was first reported by The Department of Health in 2011, the disease has spread to Western Australia, South Australia and Queensland

As part of the campaign initiative, almost 120 health professionals have been trained to use on-the-spot testing kits and more than 4000 people have been screened.

The program also includes a $1 million investment in rapid responses to remote areas in the event of an outbreak, as well as radio and television promotion.

Mr Wyatt has also urged other states and territories to act at local level, saying it is their responsibility to provide extra resources for those Australians at risk.

In Victoria, three-quarters of reported cases of syphilis were among homosexual and bisexual men, but Victoria’s Deputy Chief Health Officer Dr Brett Sutton said there had been an increase among women in the last three years.

‘It had virtually disappeared in the ’90s in Australia. It’s had a slow rise since that time, and then in recent years we’ve seen an upturn,’ Mr Sutton previously said.

The health officer said while stillbirth the most tragic outcome, the disease can also cause deformities of bone, skin, limbs and the brain in newborns.

‘It’s preventable and we shouldn’t allow it to happen,’ Mr Sutton said.