Brandon Allen-Pagett spent much of his relationship with Rachael Bourke making apologies: for losing his temper, for causing her pain, for raping her in her sleep.

The bathroom tiler is big on saying sorry but seems incapable of showing any real remorse.

Allen-Pagett’s last attempted apology to Ms Bourke came as he was to be sentenced for two counts of sexual intercourse without consent, in a letter he wanted read aloud in court but she said was simply worthless.

Ms Bourke has waived her right to anonymity as a victim of sexual assault so that she can warn others about her former boyfriend and violent, controlling men like him. 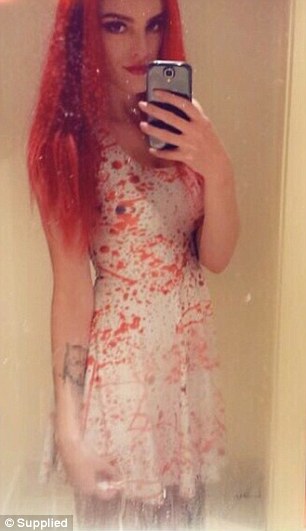 Brandon Allen-Pagett (left) made a ‘pinky promise’ to his girlfriend Rachael Bourke (right) that he would not rape her again. He is now serving a three-year prison sentence because he did 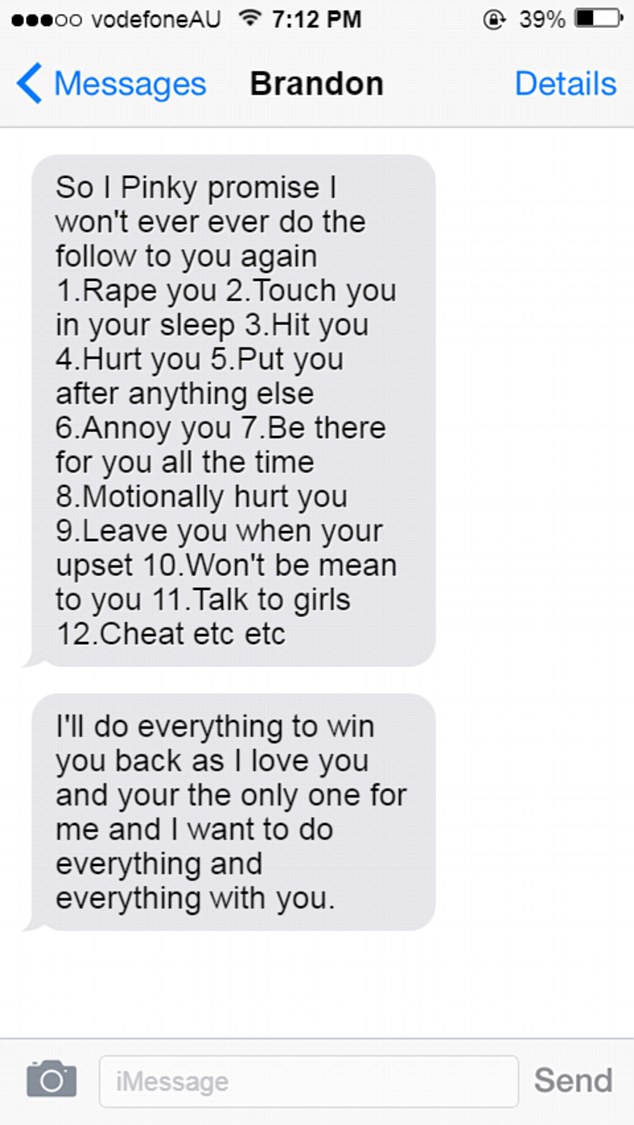 Among Brandon Allen-Pagett’s apologies to Rachael Bourke was this pathetic series of ‘pinky promises’ after he had raped her in her sleep in November 2015. He raped Ms Bourke again

She has decided to speak out about what it is like to be in a relationship with someone who won’t take no for answer and thinks saying sorry is the solution to everything.

‘It’s horrible and I wouldn’t want anyone else to go through that, ever,’ she said.

The 21-year-old child care worker from Sydney’s western suburbs was raped by Allen-Pagett who then offered a series of pathetic ‘pinky promises’ he would never do it again.

In one text message he referred to her as a ‘rape doll’ and a ‘fat useless piece of s***.’

Ms Bourke met Allen-Pagett through friends when they were teenagers and the pair began going out after they had known each other for a couple of months. 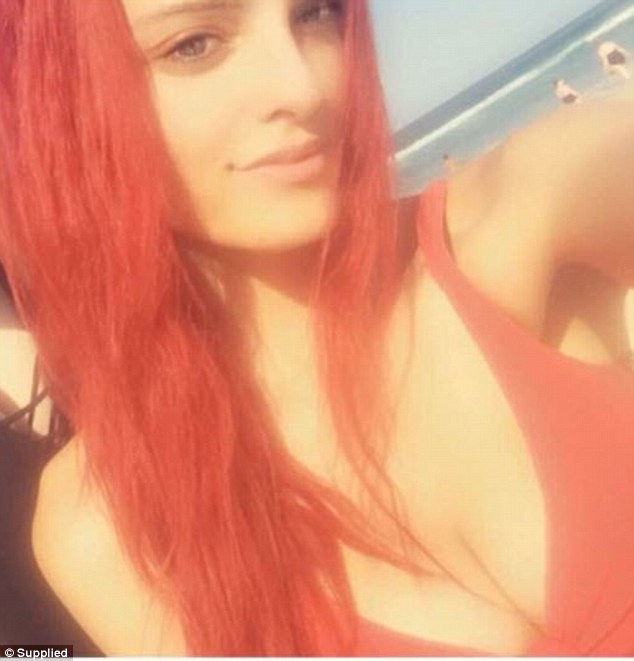 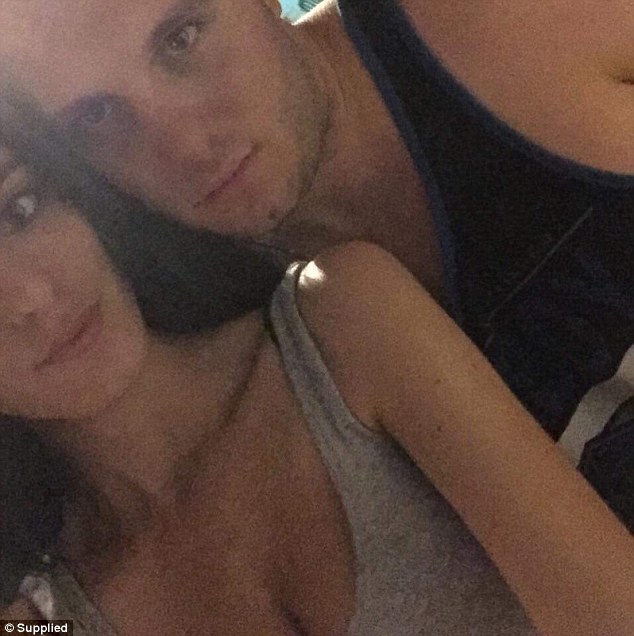 Rachael Bourke pictured with Brandon Allen-Pagett. The couple went out for three years, with Ms Bourke spending some of that time with Allen- Pagett and his family in western Sydney 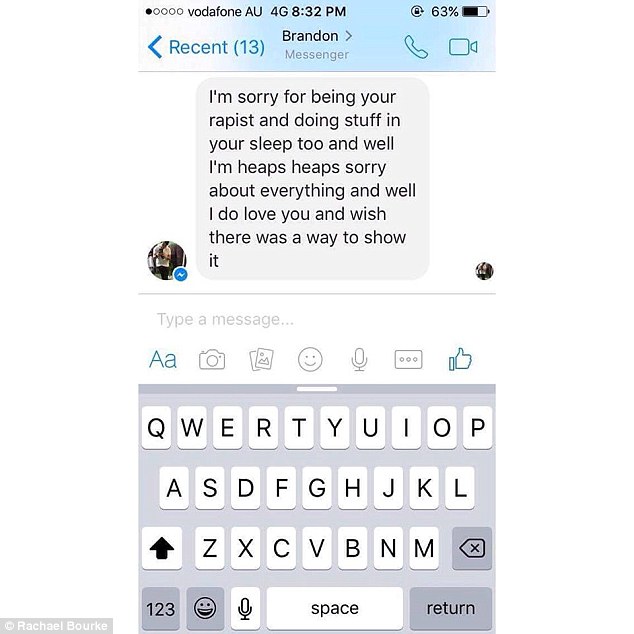 ‘Brandon initially was such a nice guy,’ she later told police. ‘He would take me to work and do things for me. However that changed as our relationship grew.’

Allen-Pagett lived in the three-bedroom weatherboard house with his parents and four siblings. He and Ms Bourke shared his room.

‘He was always there for me and we clicked straight away. He was just that perfect person that you’d want to be your boyfriend.’

As time went on Allen-Pagett became more controlling and Ms Bourke learnt he had a short temper. After about six months the relationship became violent.

Ms Bourke said that when she tried to leave Allen-Pagett – who was not a drug user or big drinker – he repeatedly threatened her. 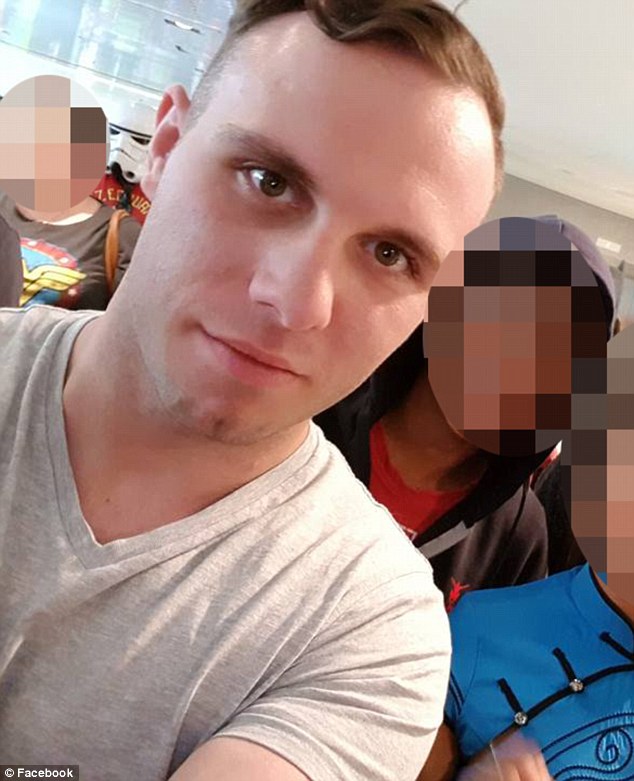 ‘I’ve had a lot of people ask me why I didn’t leave sooner,’ Rachael Bourke said of her relationship with Brandon Allen-Pagett. ‘But trying to leave him was literally impossible… ‘ 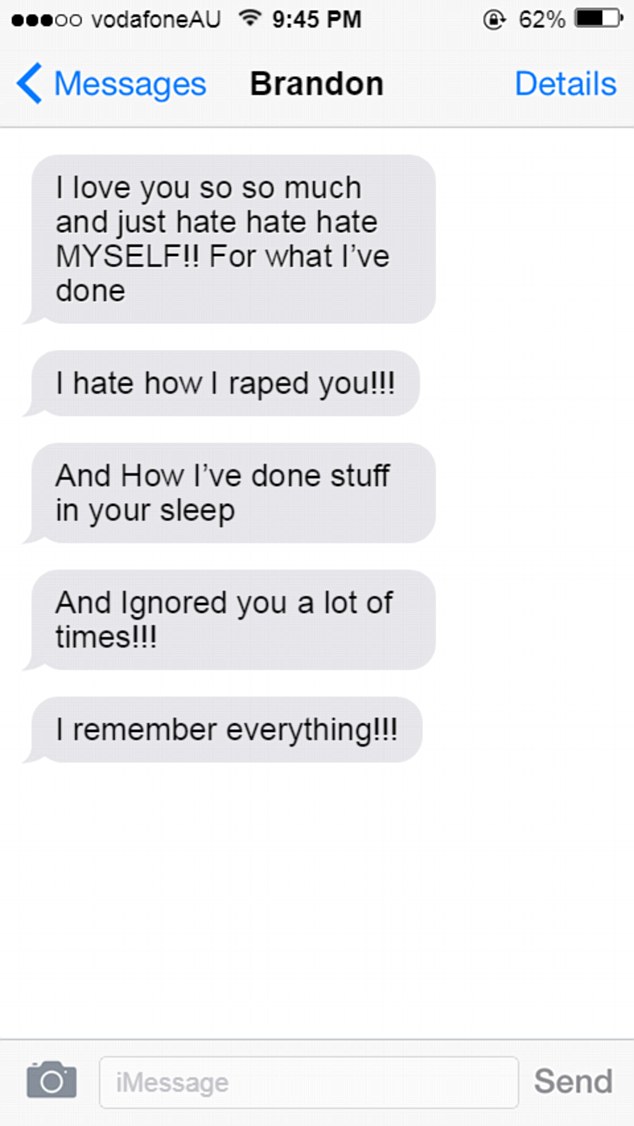 Brandon Allen-Pagett’s apologies to Rachael Bourke meant nothing but turned out to be useful to police. Whenever he mentioned rape in a text message she took a screenshot of the image

‘Brandon was always fairly violent with me and would request sex almost every night,’ she told police. ‘I was thinking how I could get out without him annoying me or further harming me.’

The relationship remained toxic for a couple of years.

‘I’ve had a lot of people ask me why I didn’t leave sooner,’ Ms Bourke said. ‘But trying to leave him was literally impossible unless you had a pull-out plan that would work.

‘I was extremely scared of him and just wanted to get away. It was like mind games, how I could leave.

‘If you try and just leave or try and sneak out he would wake up or he would follow you and just bash me until I couldn’t take any more and then I’d have to stay. I couldn’t do it.’

Eventually, after a lengthy debate, Allen-Pagett agreed to Ms Bourke’s proposal to spend a few nights at her mother’s place from November 11, 2015.

Her real plan was to start removing personal items from his home so she could escape permanently. 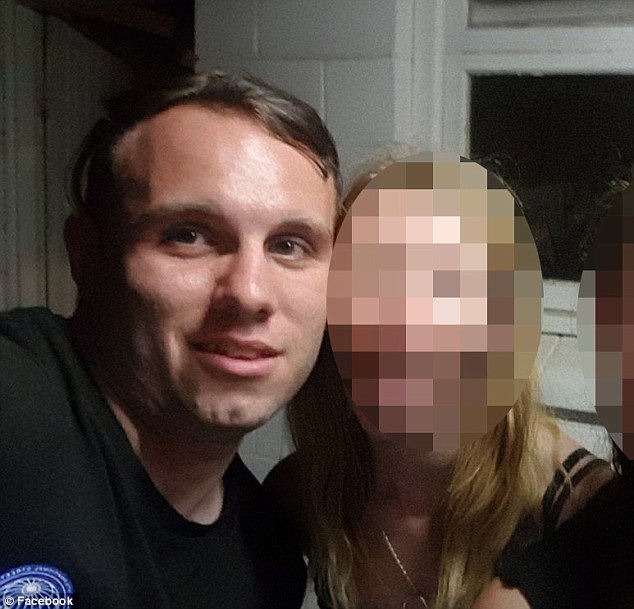 Bathroom tiler Brandon Allen-Pagett made ‘pinky promises’ to girlfriend Rachael Bourke that he would not ‘Touch you in your sleep’, ‘Hit you’, ‘Hurt you’ or ‘Talk to girls’ and ‘Cheat, etc etc’

Rachael Bourke woke to find Brandon Allen-Pagett having sex with her the night before she was to leave his house and spend time with her mother. He was subsequently jailed for rape

The night before Ms Bourke was due to depart she woke in pain to find her pants and underwear pulled down around her thighs and Allen-Pagett raping her in her sleep.

‘I rolled over and said to Brandon, “I am leaving tomorrow, why would you do this now?” Ms Bourke told police. ‘He said: “I am sorry, I did not mean it.”

‘I stayed up the rest of the night sitting on the floor next to the bed whilst Brandon fell asleep in the bed.

Later that day Ms Bourke’s mother collected her and she ended their relationship.

In the days and weeks that followed Allen-Pagett sent Ms Bourke text messages filled with promises and apologies, according to a police statement of facts tendered to court.

‘In the messages the offender apologised for his conduct, promised that he would not do it again and could not explain why he had acted the way he did,’ the statement said. 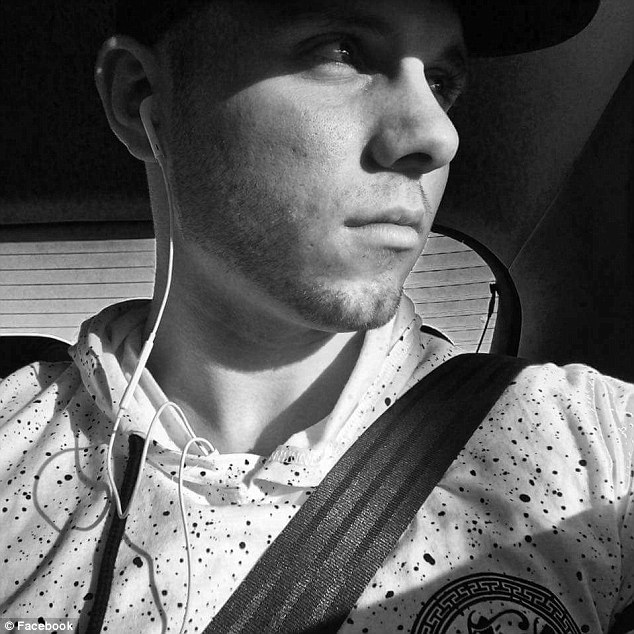 ‘I want him known for what he did and he could do,’ Rachael Bourke said of her former boyfriend, 21-year-old Brandon Allen-Pagett. ‘I just want people to be aware of what he’s like’ 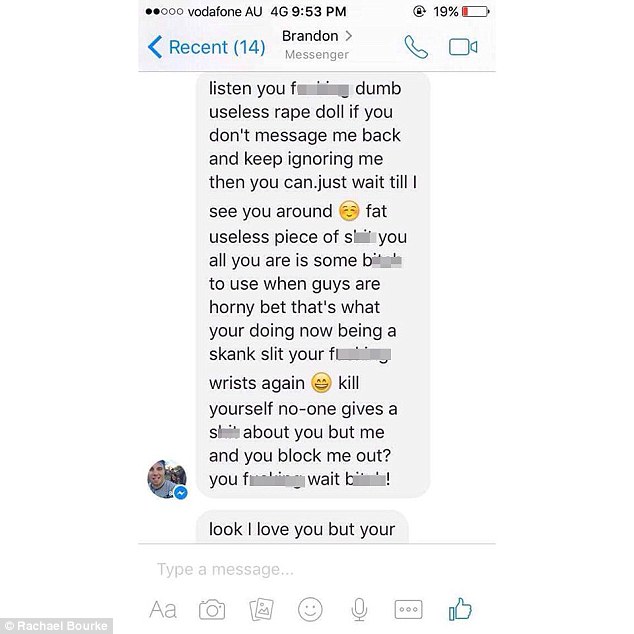 In one text Allen-Pagett wrote: ‘I wish there was something I could do to go back and stop myself from what I did and what I did to you in the past.’

In that childlike text, Allen-Pagett declared his love for Ms Bourke and sent a list of things he ‘pinky promised’ he would never do to her again. The first item on a list of 12 was ‘Rape you.’

Allen-Pagett further ‘pinky promised’ he would not ‘Touch you in your sleep’, ‘Hit you’, ‘Hurt you’ or ‘Talk to girls’ and ‘Cheat, etc etc’.

In one text exchange Ms Bourke asked: ‘How do I know if I moved back that you won’t rape me again, or attempt it in my sleep? You need self control.’

Allen-Pagett replied: ‘I know I do. And I know my promise and word can’t show that I won’t but I pinky pinky promise I won’t ever ever ever do it.’

Ms Bourke: ‘Well why did you even do it the first time and in my sleep? That’s kinda f***ed up.’

Allen-Pagett: ‘I know it f***ed and I can’t really explain why I ever did it. It was wrong and f***ed on so many levels.’

In another exchange Allen-Pagett wrote: ‘Wow see the love. But like seriously what is it.’

Ms Bourke responded: ‘There is no love because you can’t hit and rape someone you love.’

Allen-Pagett: ‘Well I do love you like heaps I know you say you can’t but there is a thing called making the wrong choice but yeah.’ 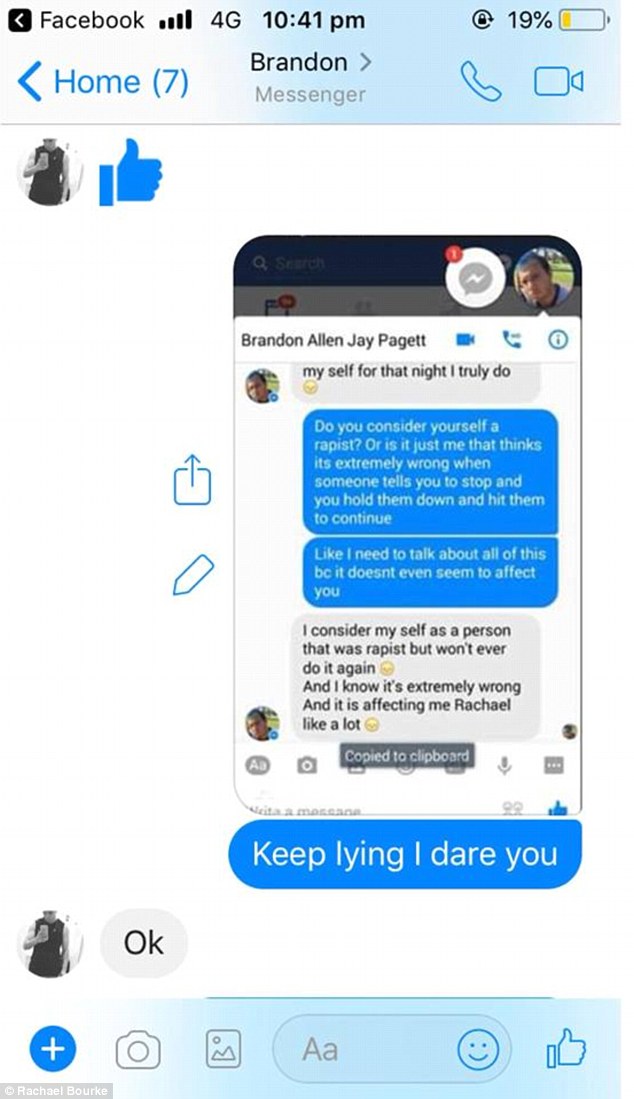 Ms Bourke: ‘Making the wrong choice? How many times can you make the same wrong choice and have your girlfriend crying and still think it’s okay???’

Every time Allen-Pagett sent a message with mention of an assault or rape Ms Bourke took a screenshot. On Australia Day, 2016, she reported Allen-Pagett to Mt Druitt police.

‘Although I stayed with Brandon for almost three years it took that three years to build courage to leave him,’ she told detectives. ‘After the first six months I lived in terror and was always scared of Brandon.’

About five months later, on June 10, Ms Bourke visited Allen-Pagett at his residence and spent the night in his bedroom while he slept in the loungeroom by agreement.

The following night they followed the same arrangement but about 3am Ms Bourke woke with her pants and underwear pulled down and Allen-Pagett on top of her raping her again.

‘I pushed Brandon off and immediately got out of the bed,’ Ms Bourke told police. 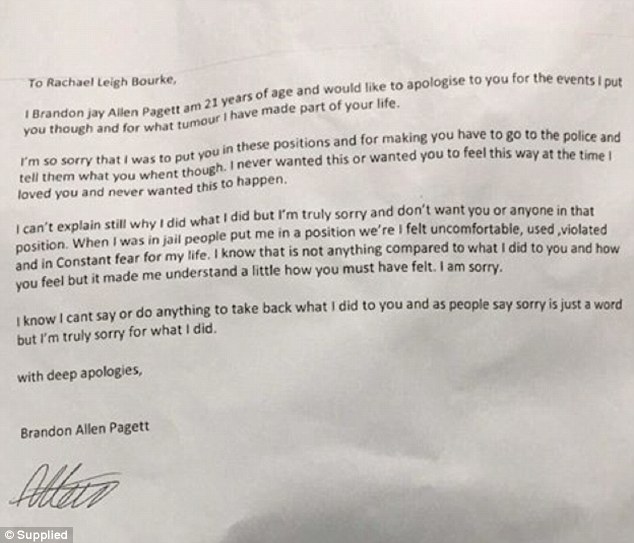 Brandon Allen-Pagett wanted to read this letter aloud in court. Rachael Bourke declined but kept a copy for herself. ‘I read through it and straight away thought it was bull***t,’ she said

‘Brandon tried to stop me but I was furious. I dressed myself and attempted to leave the premises.

‘Brandon was annoyed that I woke up. Brandon started to punch and damage the walls walls within the house.’

Ms Bourke barricaded herself in Allen-Pagett’s room using a crutch wedged under the door handle and went back to police the following day.

This time detectives asked Ms Bourke to call Allen-Pagett and in a recorded conversation he confessed to having raped her.

‘The offender apologised to the victim in relation to sexually assaulting her the evening before,’ the police statement of facts said. 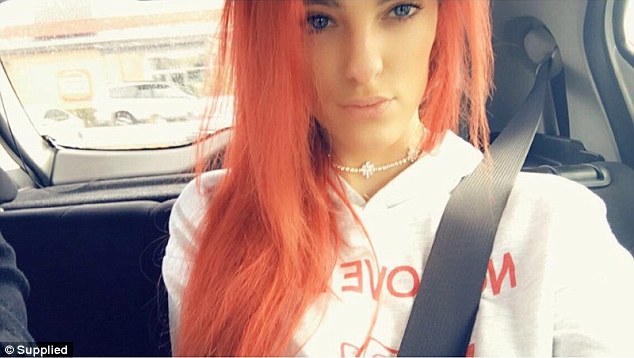 Ms Bourke said in the recorded conversation: ‘I want to know why you raped me in the first place.’

Allen-Pagett: ‘I just got overwhelmed and really wanted to have sex.’

‘Ms Bourke could recall further sexual offences however was unable to specify individual incidents,’ the statement of facts said.

Allen-Pagett eventually pleaded guilty in Penrith District Court to sexual intercourse without consent and was jailed on September 7 for a maximum three years with a non parole period of 18 months.

But the 21-year-old was not finished with his apologises.

Ms Bourke was handed a sloppily-written letter at court in which Allen-Pagett said he was sorry ‘for the events I put you through and for what tumour I have made part of your life.’ 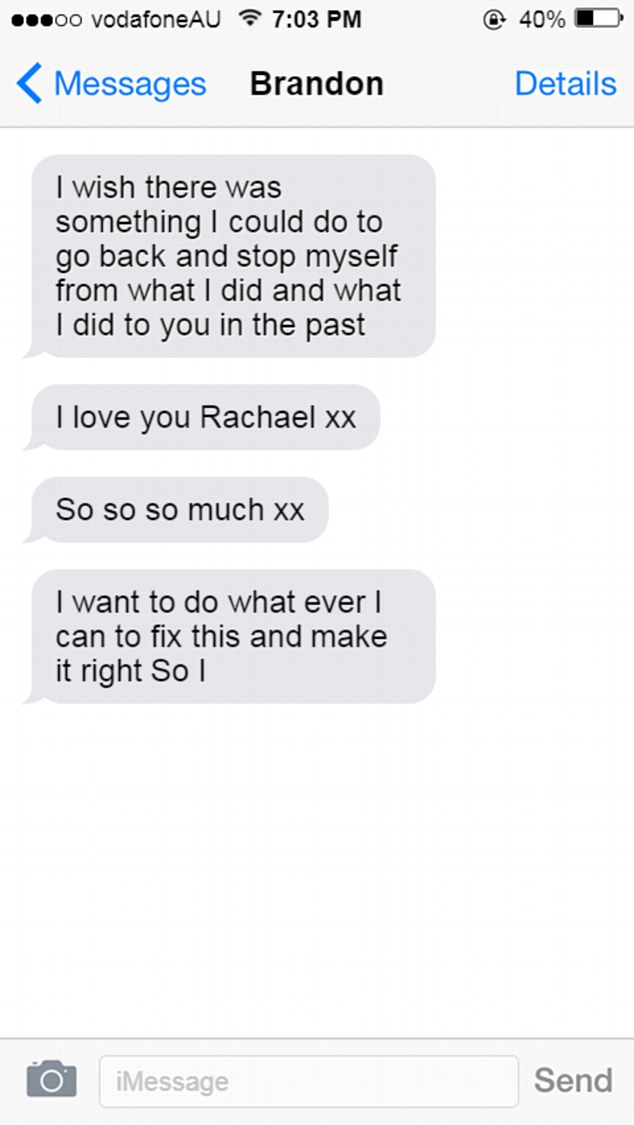 ‘I’m so sorry that I was to put you in these positions and for making you have to go to the police and tell them what you whent though. I never wanted this or wanted you to feel this way at the time I loved you and never wanted this to happen.

‘When I was in jail people put me in a position we’re I felt uncomfortable, used, violated and in Constant fear for my life.

‘I know that is not anything compared to what I did to you and how you feel but it made me understand a little how you must have felt. I am sorry.’

But Ms Bourke has learnt not to accept Allen-Pagett’s apologies.

‘I read through it and straight away thought it was bull***t,’ she said.

Ms Bourke was also not satisfied with Allen-Pagett’s sentence. ‘I think it was too short,’ she said. ‘I think he’s going to reoffend.

‘I want him known for what he did and he could do,’ Ms Bourke said. ‘I just want people to be aware of what he’s like.’

With Allen-Pagett out of her life Ms Bourke has a good job, a nice apartment and has found love with a decent man. ‘It’s all going well,’ she said of her current circumstances.

Taking into account time already served Allen-Pagett will be eligible for parole on January 24 next year. 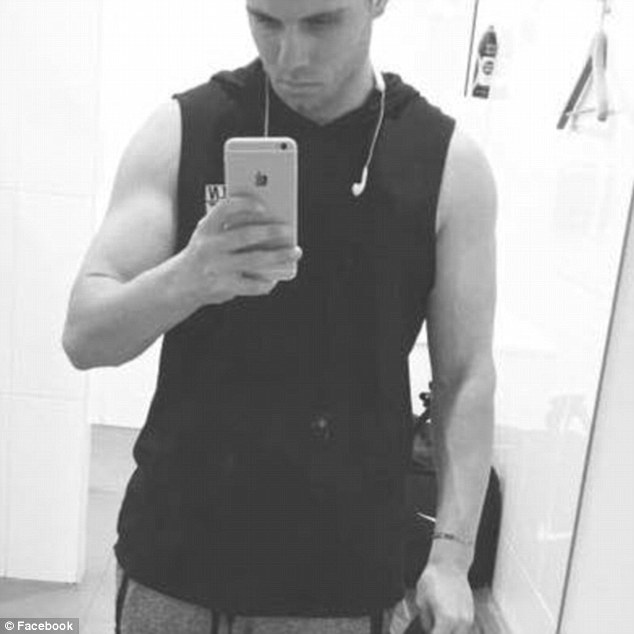