This fascinating video reveals how a swarm of bees can stick together and move in unison when their nests are rattled.

Harvard University researchers spent months shaking and rattling swarms of thousands of honey bees to understand how the insects can work together to keep their swarm in one piece.

They discovered that bees can sense the direction their neighbours are moving in – similar to a blindfolded game of ‘Ring a Ring o’ Roses’ – and follow the movements of their fellow insects.

Their research also shows that bees can collectively maintain the temperature of a swarm by sensing each other’s movements to prevent overheating or overcooling.

A swarm of bees comes together when a queen bee strikes out to form a new colony, bringing a large group of worker bees.

While scouts look for a new nest location, the colony forms a living, breathing structure, made of their own bodies, on a nearby tree branch, researchers said.

Researchers simulated the same process by attaching a caged queen bee to a moveable board, and waiting for worker bees to cluster around her.

Once the cluster was formed, the researchers simulated windy conditions by shaking the board from side to side, watching as the bees moved in unison.

As the swarm was shaken the bees spread out across the bottom of the ‘cone’ they had formed, before returning to their original shape when the rattling stopped.

They said: ‘You don’t know which direction everyone in the circle is moving, but you do know the direction your neighbour is moving because you’re holding their hand.

‘You don’t know when everyone falls down, but you know when to fall down because your neighbour falls down.

Researchers simulated windy conditions by shaking a board from side to side, watching as the bees moved in unison. The video reveals how a swarm of bees can stick together when their nests are rattled 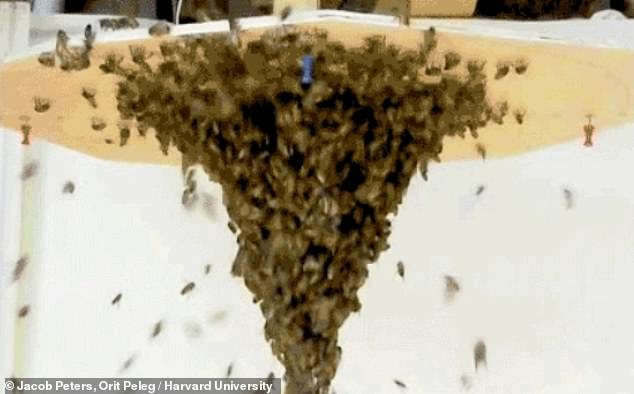 A swarm of bees comes together when a queen bee strikes out to form a new colony, bringing a large group of worker bees. Researchers simulated the same process by attaching a caged queen bee to a moveable board

‘Like bees in a swarm, you follow the cues associated with the local strain from your neighbour.’

Jacob Peters, one of the paper’s co-authors, said individual bees can tell the direction of the strain based on how their neighbours are reacting.

Peters said: ‘Because the strains on the swarm are highest at the top of the swarm, where its connected to the branch – or in this case, board – they know to move up.

‘All the bees move up together, because they’re influenced by this gradient, so it leads to a coordinated movement.

‘When we build machines or materials, we use simple control algorithms that are top down, where you have a centralized command that controls all of the moving parts in the machine.’

‘But in this system, the bees are achieving this coordinated change in shape without a central controller.’

‘We demonstrated that bees can harness the physicality of the environment solve a global mechanical stability problem by using local sensing and action.’ 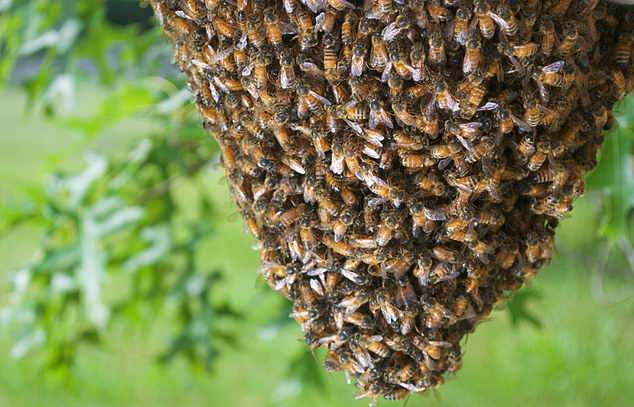 HOW DOES THE HONEYBEES ’HOT DEFENSIVE BALLS’ DEFENCE STRATEGY WORK?

Honeybees should have no chance against the ferocious Japanese hornet – the predators are an inch (2.5 cm) long.

But the tiny creatures can actually triumph by swarming over their foes in such numbers that hornets are ‘cooked’ inside a ball of bees, a technique first discovered in 1995.

The defence mechanism is known as a ‘hot defensive bee ball’.

When hornets attack, they kill all the worker bees, before ‘looting’ a nest for larvae and food. To prevent this, Japanese honeybees developed the defence mechanism to stop the predators.

The bees swarm over the hornets in groups of up to 500, and start vibrating their wings until the temperature reaches 46°C (115°F). The heat is fatal for the hornets.

It’s vital that this happens quickly, or the hornets can release pheromones to call for assistance.

In one study, conducted in 2012, researchers in Japan watched the bees as they assaulted an inch-long hornet – pulling them off the ball as they attacked and scanning their brains to see how they coordinated their attacks.

The scientists, Takeo Kubo of the University of Tokyo and Masato Ono of Tamagawa University sampled bees at different points during the assault – and found that bees engage higher brain functions as they swarm into the ball.

The bees coordinate their attacks, sharing information about heat in the ball – which could be a trigger for the bursts of brain activity.