The NHS carries out more than 8,000 toe, foot and lower leg amputations a year due to a single disease: diabetes.

And the figure is rising because of an increase in type 2 diabetes, a lifestyle-related illness, cases of which have doubled since the mid-Nineties.

But now a breakthrough in wound care technology could halt this escalation in its tracks.

Scientists have developed a transparent ‘patch’ made from patients’ blood which could help to heal the problem ulcers that lead to foot or leg amputations.

Fact: Recent figures from Public Health England show that between 2015 and 2018, the NHS carried out more than 27,000 toe, feet and lower leg amputations due to diabetes

The treatment, called LeucoPatch, has been trialled at more than 200 hospitals around Europe — including several in the UK — and involves taking about half a cup of blood from a patient’s arm.

The blood is put into a container in a machine that spins it hundreds of times a minute. During this process (known as centrifugation), the more dense red blood cells sink to the bottom, while the less dense white blood cells rise to the top.

Centrifugation also separates out fibrin, an even less dense protein that forms a mesh-like substance which acts as a scaffold in wounds. Blood can clot on to this to form a healing scab and healthy new skin cells can begin to grow.

Following the spinning process, the fibrin is removed and pressed into a semi-solid round patch — roughly the size of a 50p piece — which also contains leucocytes, white blood cells that help to kill bacteria and viruses, and platelets, tiny disc-shaped cells which help blood to clot.

Designed to treat foot ulcers, the patch is placed on the wound and covered with a loose dressing.

After a week, it starts to break down and is replaced with another patch — made in exactly the same way. This process is repeated until the wound heals.

It can take around 20 weeks to heal a foot ulcer fully, a common and severe complication of diabetes which develops because the disease damages nerves and blood vessels at the extremities. 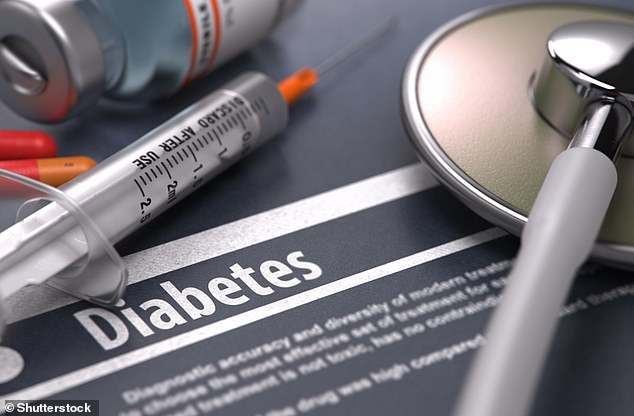 Risk: People with diabetes are far more likely to need their toes or feet amputated because their injuries do not heal normally. High blood sugar can cause nerve damage which means patients cannot feel their skin as well and may not know when they have a wound

Recent figures from Public Health England show that between 2015 and 2018, the NHS carried out more than 27,000 toe, feet and lower leg amputations due to diabetes.

An increase in type 2 diabetes is thought to be the cause.

Most diabetic foot ulcers are treated with a combination of debridement (the removal of dead tissue), antibiotics (to combat infection), and protective dressings. But in a significant number of cases, the wound fails to heal due to lack of blood flow through the damaged blood vessels.

The results of the LeucoPatch trial were featured recently in a major study published in the journal The Lancet Diabetes & Endocrinology.

The study involved more than 260 patients with hard-to-heal diabetic foot ulcers. Half were treated with the new LeucoPatch and half received standard treatment, such as debridement and regular dressings. Each patient was followed up for six months.

In the LeucoPatch group, 34 per cent saw wounds heal completely, compared with just 22 per cent in the control group.

It’s thought the patch works by stimulating the release of growth factors, which promote tissue repair and the formation of healthy blood vessels to fill the wound with oxygen-rich blood, vital for healing.

Philip Herberts, 54, from Pontefract, Yorkshire, was one of the first in the UK to benefit from the treatment — avoiding amputation of his lower leg.

The father of one was diagnosed with type 2 diabetes in 2007, after he was immobilised by a trapped nerve and his weight ballooned to 22st.

A few years ago, he developed peripheral neuropathy, a complication of diabetes where nerves in the extremities become damaged, causing numbness in the leg and foot. This means injuries such as cuts and blisters can go unnoticed and don’t heal properly.

‘I was on holiday when I noticed a blister bigger than a £2 coin on the bottom of my foot, just behind my toes,’ says Philip. ‘Over the next 12 months, it got bigger, despite the efforts of my nurse.’

Doctors warned Philip he faced an amputation unless the ulcer started to heal. ‘I was horrified,’ he says.

‘I’m a self-employed mechanic and driver, so losing part of a leg would have had a tremendous effect on my life.’

Then, his team at Wakefield Hospital, part of the Mid Yorkshire Hospitals NHS Trust, asked Philip if he wanted to take part in the LeucoPatch trial.

After only eight sessions of treatment, Philip’s ulcer had completely healed.

‘It just disappeared,’ he says. ‘It was amazing. It’s given me back my mobility and I have lost around 5st.’

LeucoPatch is available in the UK only in clinical trials, but if they are successful (and depending on costs, which are currently unknown) it may become available on the NHS.

Dan Howarth, head of care at the charity Diabetes UK, says: ‘More than 160 diabetes-related amputations happen every week in the UK, so anything that has the potential to reduce this shocking number is welcomed.’